This review was made possible by Avexir / Play Interactive

Below is the BIOS configuration, with RAM selected at 1866 which somehow the BIOS will run it at higher spec. *image taken from previous RAM review*

Below is the result.

No vDimm boost on the setup. It’s just a change of clock speed and RAM ratio. Passed no less than 5 rounds of test because I tested it before I went to bed. 😛

The following are the possibilties
a) the RAM could go even faster (Mhz) with the same setting.
b) boosting vDimm would push the speed (after hitting the ceiling on point a) even further
c) at the same settings, it is possible to run it at tighter timings.

Performance aside, the heatsink design is nothing grand but the RAM itself is beautiful once the LED comes alive.

On the downside – the RAM is TALL! It’s not surprising though, the additional height is required to accommodate the LED. While standard profile RAM sticks could still fit under a huge heatsink by an angled insertion, the same method is not possible for RAM of such height as there is no clearance between the RAM and the heatsink. 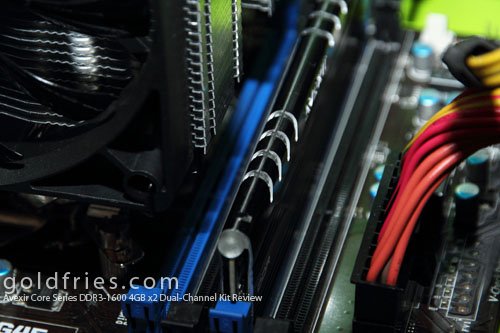 Overall – it’s a great set of RAM for those who want to max out the speed of RAM. The RAM is currently available in Malaysia at RM 229.