Despite being priced the same as the Frostwin I reviewed just last week, the DeepCool Ice Blade Pro v2.0 performs at a totally different level altogether! Don’t be fooled. Despite the lack of fancy design on the heatsink, it’s actually a no-nonsense superb cooler. I’ll tell you why in a bit. 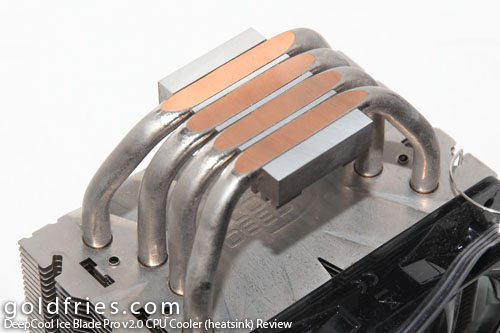 Installation was easy, though it uses the same mechanism at the Frostwin (ok well easier for me since I done it before) but it’s a lot easier due to the heatsink design. For example, the 2 connecting points that hold the heatsink are much easier to access.

The good thing is that the heatsink doesn’t block the memory. 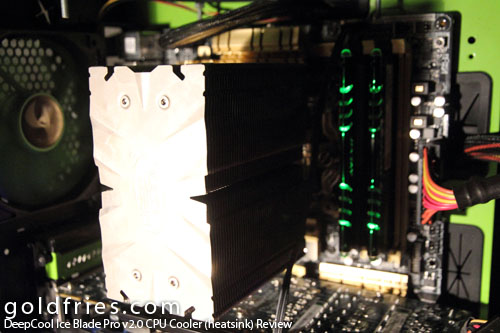 The fan does block the memory but it’s easily removed. No big deal. If need, you have the choice of placing the fan on the other side of the heatsink so the fan acts as an exhaust rather than as an intake or blower. 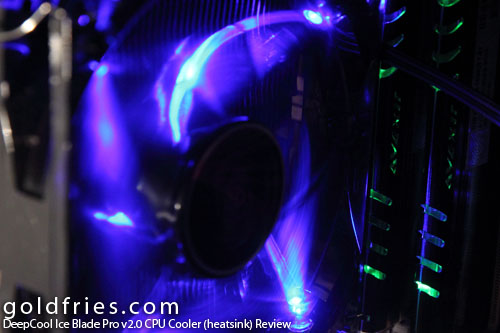 Below is the CPU-Z for the processor, on overlock.

Fanless? Yes, you read that right. I normally don’t do fanless unless I think the heatsink can make it. Running at only 61Â°C despite overclocked and full load, I had to give fanless a try and I wasn’t disappointed.

Even with the fan, the heatsink wasn’t noisy at all.

Retailing at USD 40, priced exactly as the Frostwin (from DeepCool as well) – I see no reason on getting the latter. The Ice Blade Pro v2.0 is the way to go.