And so the GTX 950 graphic cards hit the market last week, the latest GPU from Nvidia that’s targeted at MOBA (Massive Online Battle Arena) gamers. MOBA games are such as DOTA2 (Defenders of the Ancients), League of Legends and Heroes of the Storm. 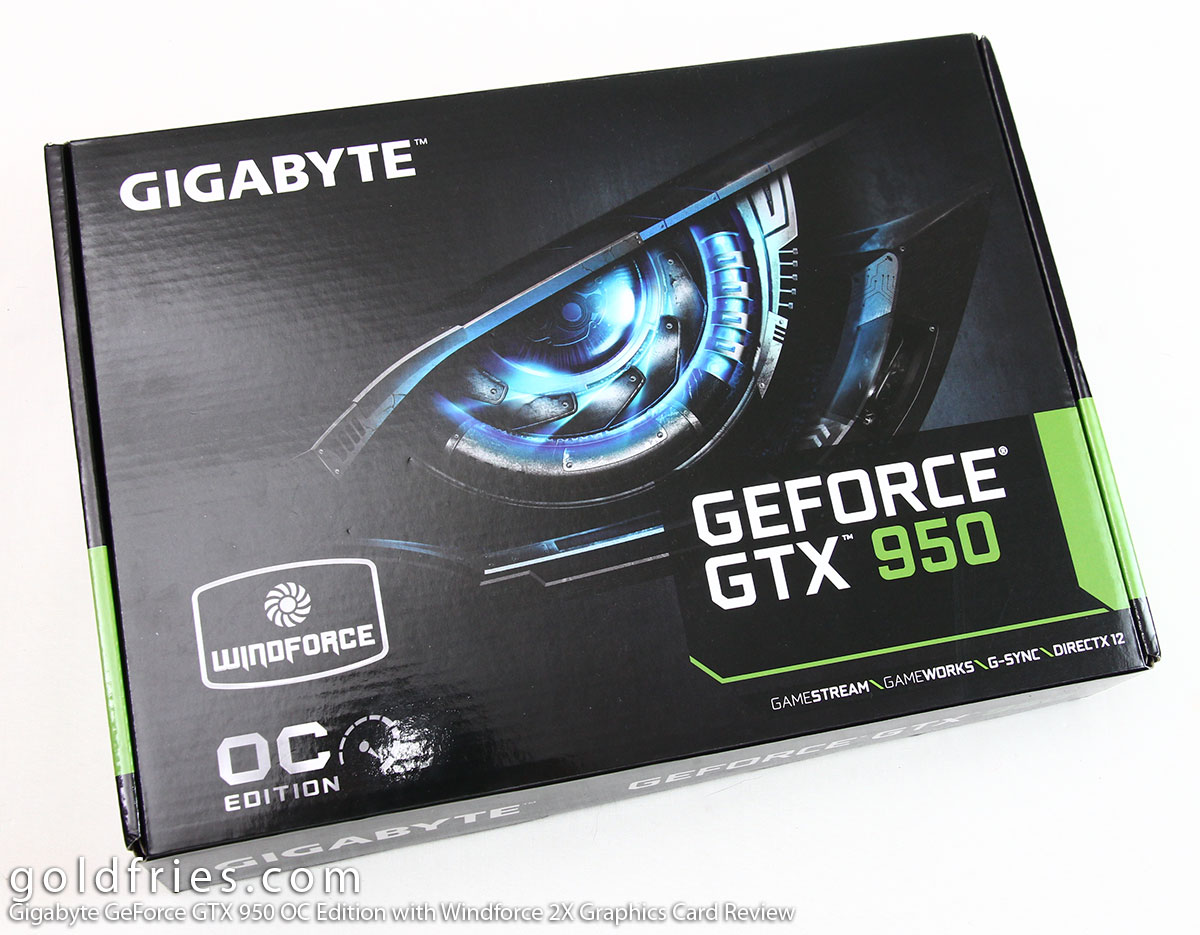 Regardless of Nvidia’s positioning, the GTX 950 is a GPU that works on any game – benchmarks will be included in this article of course but let’s look at the Gigabyte card in greater detail. As you can see from the image below the card carries Gigabyte’s signature Windforce cooling system. Unlike the long cards that uses Tri-fan setup, the GTX 950 is not a power hogging card and 2 fans with a decent heatsink would suffice. 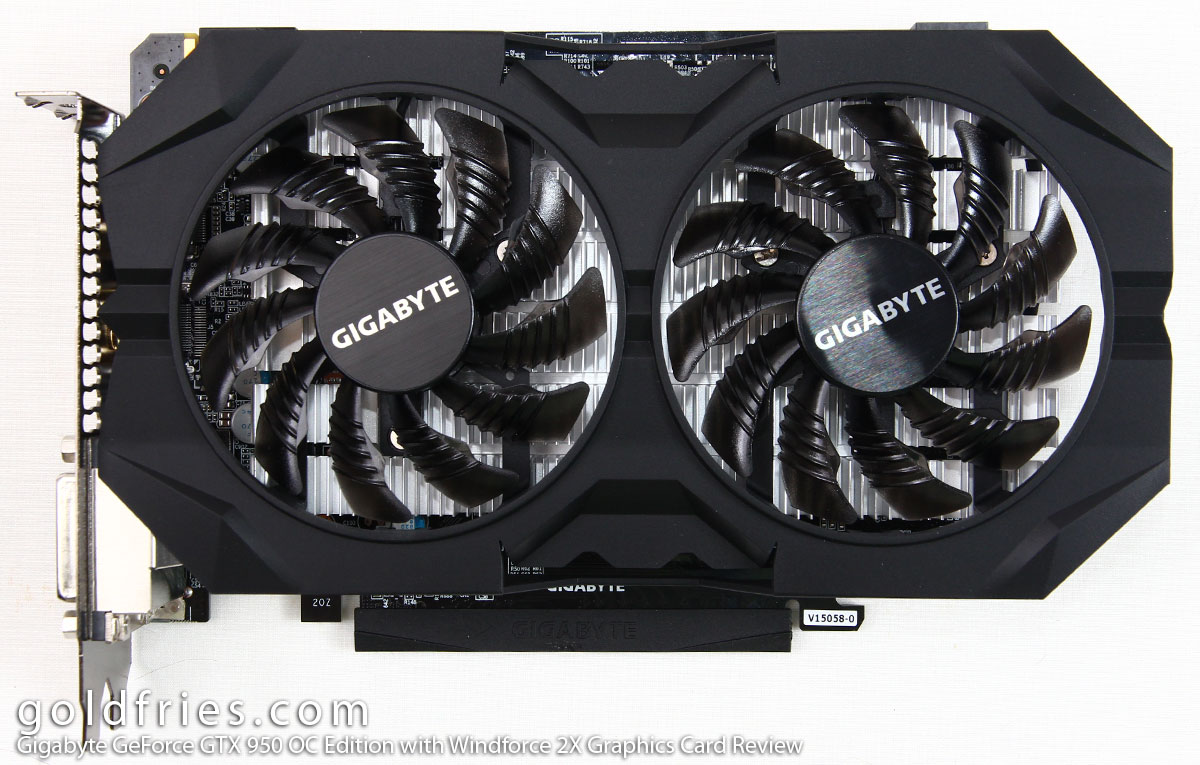 From the top you’ll see the words WINDFORCE, the rated power draw of a GTX 950 card is 90W hence only a single 6-pin PCI-E connection is required. 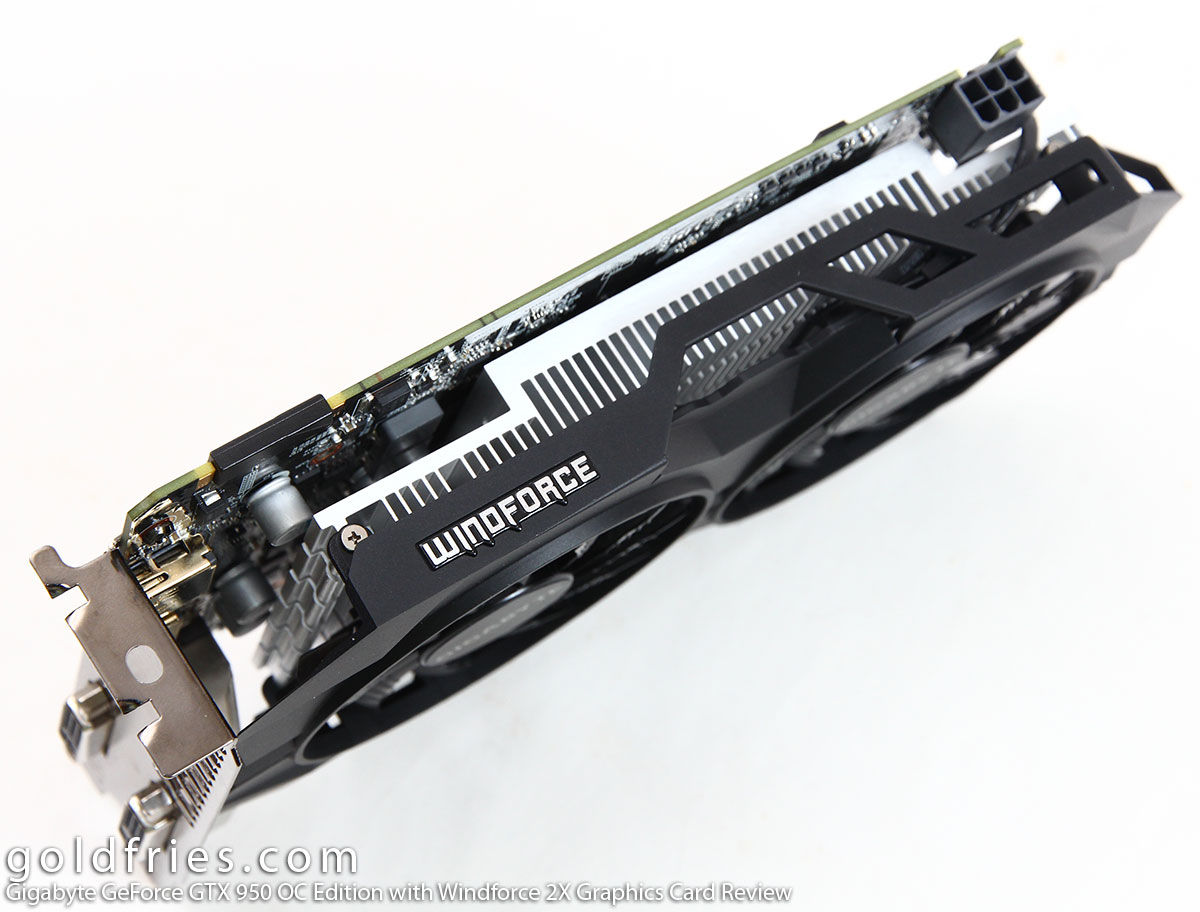 The Gigabyte GeForce GTX 950 OC Edition does not come with back plate. Here’s the view from the bottom, as you can see the heatsink block is very simple and there’s no sign of heatpipes. 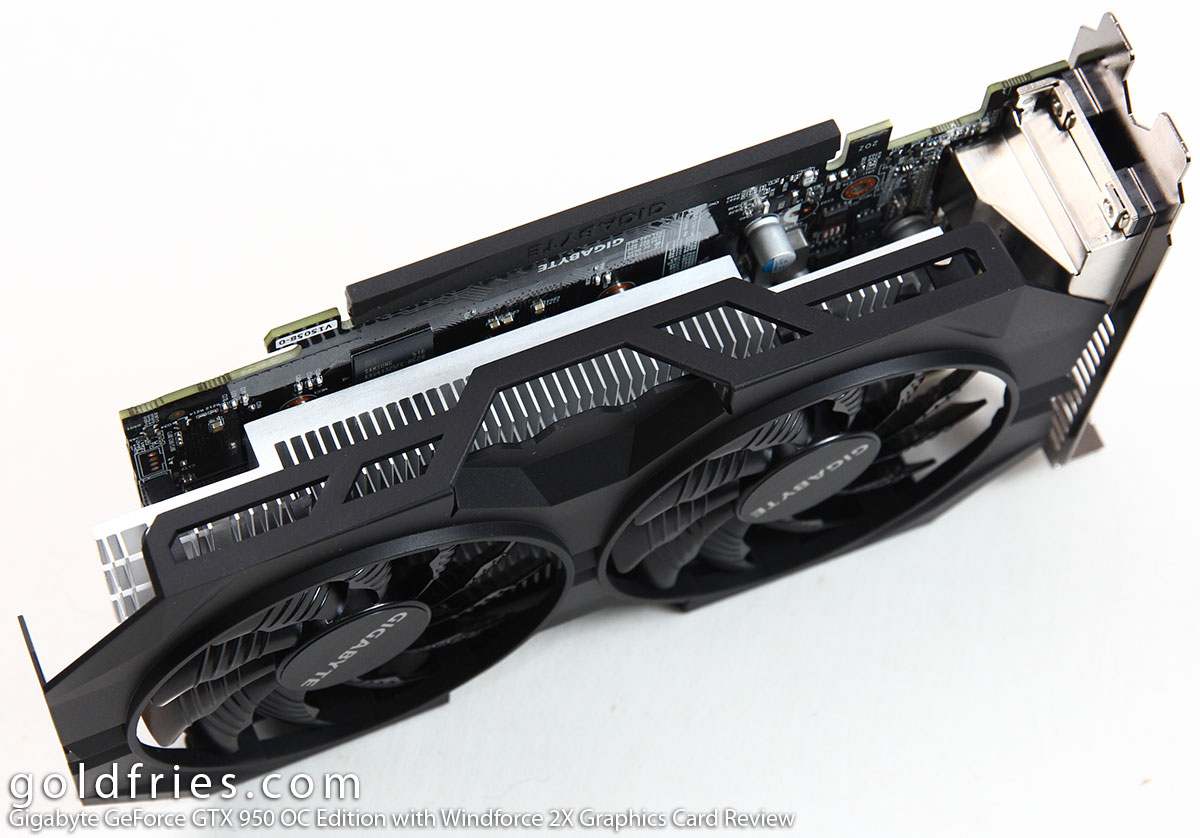 Here’s the view from the rear, it still comes with DVI output, in fact it has 2 of them! Clearly this card is targetted at budget users who might still be using old monitors. 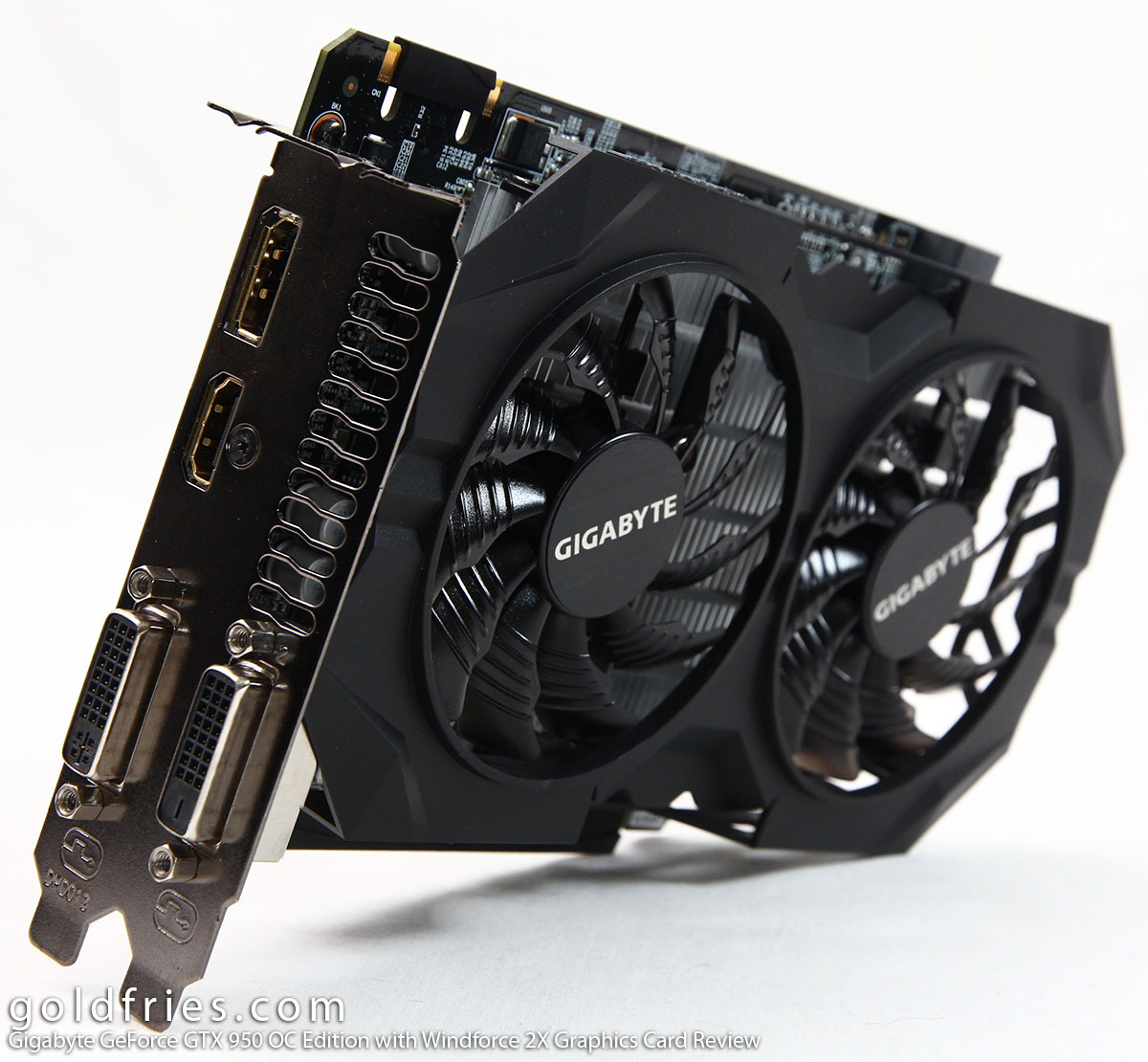 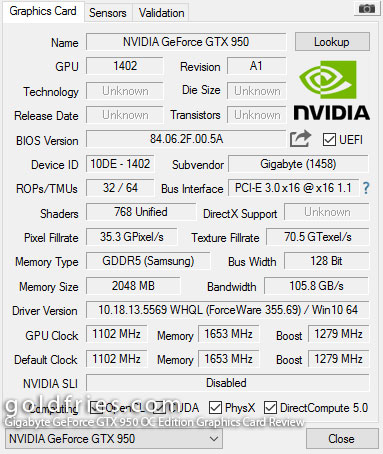 Settings : Every option to the MAX setting available. 8xAA for Full HD.

Looks like the Gigabyte GTX 950 handled the overclock easily, resulting in 5% to 10% performance increase.

The numbers for GTA V may look low but that’s with 8x AA. The GTX 950 will handle the game well once AA disabled.

The Windforce cooler is impressive on this one, it runs quiet even at full RPM. Being a low power GPU the card remains under 70Â°C on load despite having the fan speed set to AUTO, hovering at around 58% the max RPM.

The stress was done with Furmark Burn-in Test. Power consumption reading was taken from the watt-meter, actual power draw by the entire system from the wall point. I’m using an FSP Aurum S 700W with 90% efficiency and the estimated system power draw (CPU, not including GPU) during Furmark test estimated to be around 60w.

The power draw seems a little higher than expected but I don’t think it’s a cause of concern, after all this based on estimation and it’s within a good estimated margin.

The Gigabyte GeForce GTX 950 OC Edition retails at RM 799, a very good price point for a card that’s not based on reference cooler. The card is compact, cool and quiet – just lovely!

Now how does it compare to the cards I compared it with? Good question.

In comparison to the PowerColor’s R7 370, the R7 370 is priced at around 80% the performance of the Gigabyte GTX 950 but it provides only 72% of the performance (62% if you don’t factor in GTA V benchmark where the R7 370 seems faster) so it looks like Gigabyte’s GTX 950 is still the better one for Performance to price, only to lose out on the lack of back plate.

It would’ve been great if the price could be lowered but heck, you get around 84% the performance of a GTX 960. If you have the budget to stretch the GTX 960 would be the better choice but you won’t go wrong with GTX 950 if your budget is a little short.