Just as with other RPG games, there’s always the points and stats to meddle with and it is this aspect i have problem with.

After examining the details about stats setting, it seems that Strength increases your damage and resistance to Earth attacks by 0.5%. And guess what, the same applies to Intelligence and Agility, where one affects Fire element and the other affects Air element. 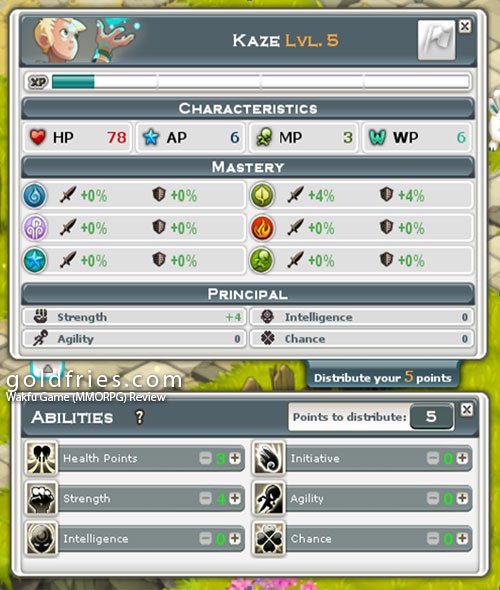 It’s a WTH thing to me – typically, STR affects physical attack, INT affects spell attacks and SP, Agility is often related to dodging and in some games, attack speed.

The description for those stats in Wakfu doesn’t indicate any of those at all so it’s as if you just pump it to whichever element you wish to more damage to. 🙁
Other Details

Graphically the game looks neat, it’s clean and colorful but the interface could use some mouse-over hints. Even the list of key-bindings doesn’t seem to show everything, for example I forgot what’s the key to press to SIT and I can’t find it without doing random keyboard pressing.

The game doesn’t go full screen as well, the most I could get out of it, is that the client fills the screen but with borders for the box. Going by the way this game was designed, it looks like it won’t work well on tablet devices, like say a Windows 8 based tablet. On the plus side of things, the games can be played on Windows, Mac OS and Linux.

Overall my experience in this game is good, there’s no random crashes and such. Turn-based combat element is pretty fun but it does make the game a little slow in pace. For example, in games like Raganrok Online, I could just hop on a map and beat up everything I see. In Wakfu, you enter combat mode for each mob you intend to engage, which is pretty tedious.

Wakfu’s online shop opens on the 2nd Jan 2014. You can purchase the game currency (Ogrines) from www.wakfu.asia and use it for in-game purchases. To add to the “bonus” coming in the near future, Wakfu APAC is currently rewarding players as they have 50k likes on their Facebook page at https://www.facebook.com/wakfu.apac