I’m sure you’ve seen some price lists with the following.

A 1GB GDDR5 card and a 2GB GDDR3 card. The GDDR3 card is cheaper, has double the RAM size and shouldn’t be performing that far behind, right?

GDDR5 is twice as fast as the GDDR3, and RAM speed on the graphic card helps heaps BUT the doubled RAM size from 1GB to 2GB doesn’t help at all because low end cards just aren’t fast enough to utilize it.

Here’s the GPU-Z of the HD 7750 from Asus that I reviewed last year. 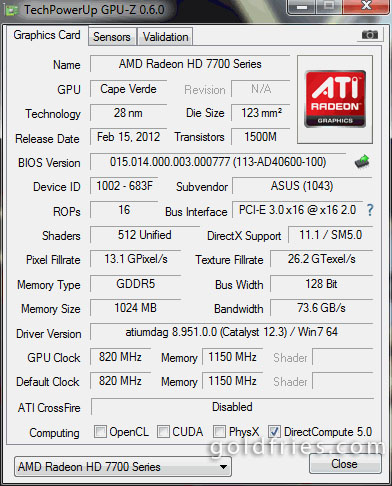 If you compare the above, you’ll see the differences are the memory type, memory speed, memory size and bandwidth.

Division by 8 for change from BIT to BYTE.

So let’s start with the calculation for the 2GB GDDR3 card.

The 25600 figure you see is correct, it’s in Megabytes/S. To convert from Megabyte/S to Gigabyte/S, you’ll then have to divide it by 1000 and you’ll derive 25.6 which is exactly the figure you saw above.

Now let’s do it for the GDDR5 calculation.

You can simplify the calculation by converting the memory clock from Mhz to Ghz. 1150Mhz = 1.15 Ghz.

How does bandwidth help? Bandwidth allows faster transfer of data across the RAM, that’s why high end cards have 384bit bus. 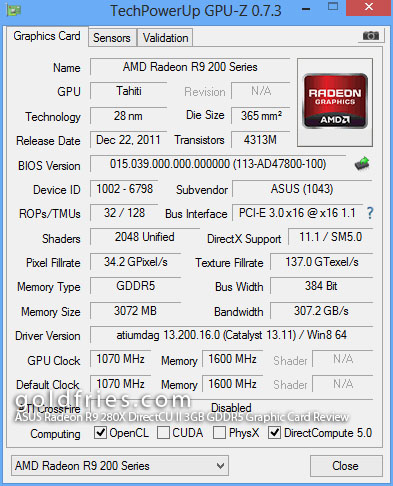 Bear in mind that the bus width alone is not enough an indicator of performance. One has to refer to the memory type.

I also downclocked the HD 7750 1GB GDDR5 to match the clock and memory speed of the 2GB GDDR3 variant. 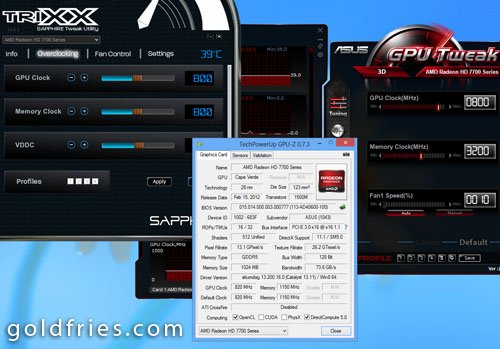 Tests were done in 720p resolution.

Quite a significant gain there, that’s like some 40% boost in frame rates.

And that made the difference between non-playable and decently playable, a 40% increase in performance as well.

The difference is even greater in Just Cause 2, with more than 50% performance gain with the GDDR5 variant.

My view is that you should avoid the GDDR3 version at all cost if you’re looking for performance – truth be told, they’re lower in manufacturing cost than the GDDR5 variant but priced similarly. To put it bluntly, you’re paying good money to get less performance than what you could have and the brand makes more profit from your purchase.

Keep in mind also that I’ve already lowered the clocks for the HD770 1GB GDDR5 in the comparison above. It doesn’t make sense to reduce your cost by less than 10% and lose out so much performance.

Fortunately not every brands goes this GDDR3 path, for example Asus does not have any GDDR3 variant for the HD 7750.

Oh and one last thing – the worry about GDDR3 and GDDR5 variant happens only on the low end cards. High-end cards will never have GDDR3 variant, as you can see, even a low end GPU like the HD 7750 is crippled when being tied to the GDDR3.

I’ve seen the HD 6670 2GB GDDR3 variants too. Avoid them at all cost, aim for the 1GB GDDR3 version if you must. The GDDR3 vs GDDR5 issue isn’t limited to AMD cards alone, I’ve personally experienced how stark a difference between the performance of a GTS 450 on GDDR5 and a GTS 450 on GDDR3.

A GDDR3 card is not an issue if you’re just using the graphic card to display content but if you intend to play some games on it, please find a GDDR5 variant.