They come in tiny neat looking boxes. With the RED vs BLUE them, it almost feels like The Matrix where Neo chooses between the RED and the BLUE pill. 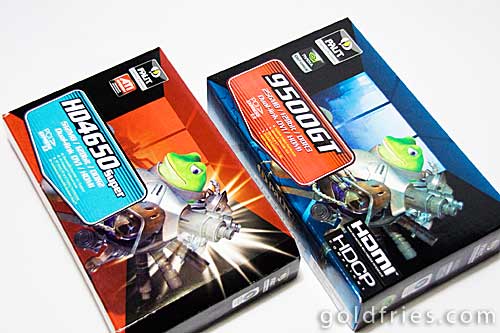 I was expecting the nVidia card to be something that’s NOT RED. To me, RED has always been the ATI board while I’ve encountered a few RED nVidia boards, I certainly was really expecting Palit to give this card a blue PCB to match the box. 🙂 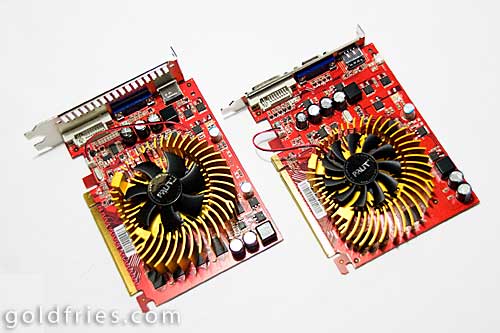 The cards are very simple looking. In fact they looked almost the same, it’s just that the HD4650 unit has a bigger heatsink and occupies 2 slots. 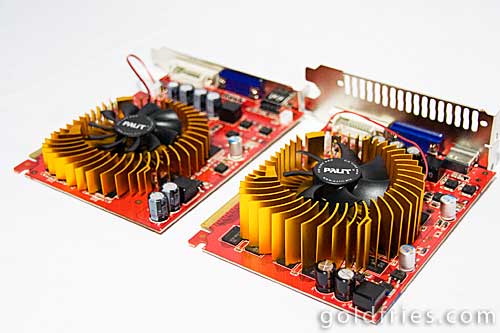 Both cards come with VGA, DVI and HDMI out. Neat! 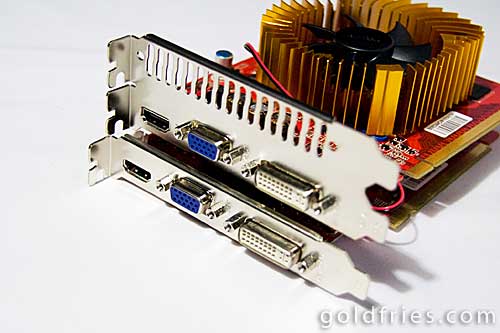 What I’m most puzzled is that my 9500GT unit doesn’t look anything at all like the one on the 9500GT product page. Can’t find anything on the product list that looks anything like it. So I’m paying for the same thing minus the better heatsink?

Hereâ€™s a summarized detail of the card.

Both units come with Manual and CD only, the 9500GT came with an additional cable but nothing in the box says what’s it for.

Seeing that both are low end cards, I’ve decided to test them on 1024×768 resolution as well. Just to see how far has technology brought us, even on rather old games.

(Yes! no typo there! It is <1! Even the MENU screen took minutes to load. Those red boxed notices took around a minute to load. A MINUTE! ALT+TAB, Task Manager to exit game was the fastest out!)

Confused? Looks like both cards exchange blows for the benchmarks. In the end, it’s the card with the faster memory that’s the overall winner. The HD4650 with twice the memory size does lead in games like Crysis and World in Conflict but the lead isn’t much, considering both are unplayable.

I know I’m testing these cards pretty harshly but I think it’s a fair test to see whether they could cope with maximum details even at 1024×768.

Generally, you can see that both cards work best at lower resolution and in some cases, much lower detail is required. Like say disabling Anti-Aliasing completely and reducing details on textures and models then both cards would run the games nicely, and perhaps you could possibly bump it up to 1440×900 for 19″ wide LCD if you’re fine at running lower details.

The HD4650 has the advantage with the bigger heatsink, more surface area for heat dissipation.

I have no problem giving both cards the recommendation…….

Having the DDR3 version will hurt either the DDR2 version or the HD4670 sales as the performance will be in between the HD4650 DDR2 and HD4670 DDR3.