2-in-1 devices, a combo of notebook and tablet, favored by some, hated by many. 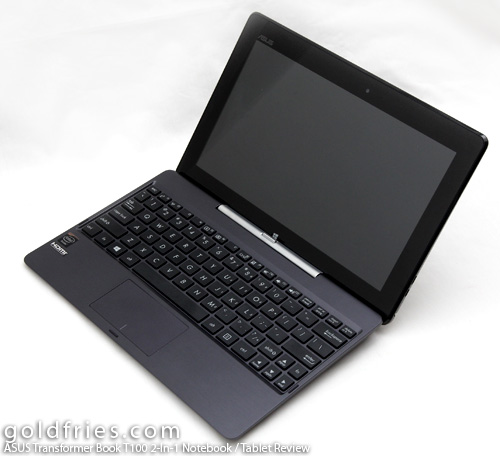 Is the Asus Transformer Book T100 something worth considering?

Let’s have a quick look at the Notebook. 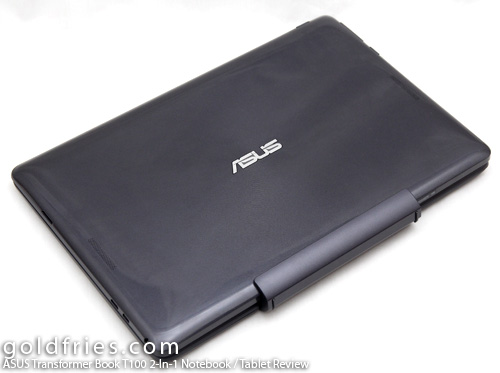 The keyboard on the dock is comfortable to the touch, not the best in quality but I think it’s really good for something at this price point (price? I’ll let you know later). Bear in mind that it’s a 10″ tablet so the keyboard and touchpad are small. 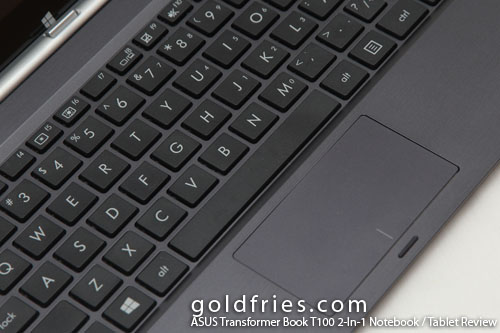 The tablet latch is as seen in the image below. 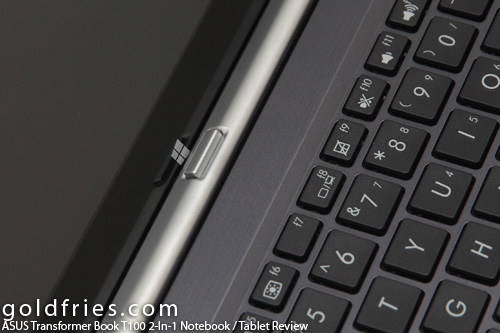 The hinge and the clamp areas are sturdy. When unfolded, the clamp becomes a stand that gives the keyboard dock a tilt. 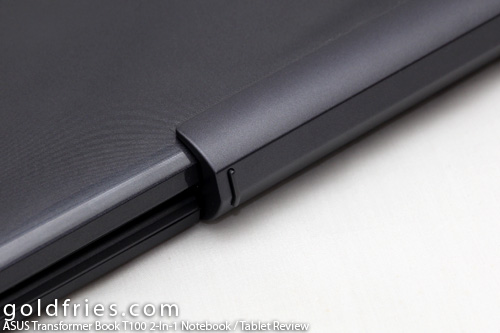 Another thing about the hinge is that when it’s opened, the notebook seem to be unable to have all 4 supports resting on the tablet. From my inspection, it looks like Asus might need to work on improving the assembly quality. 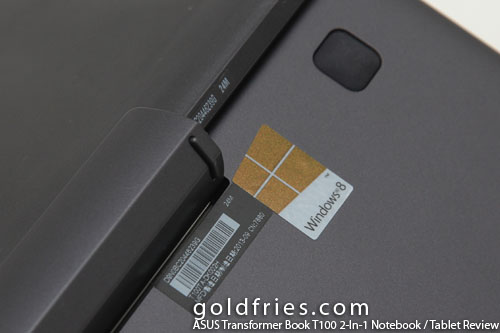 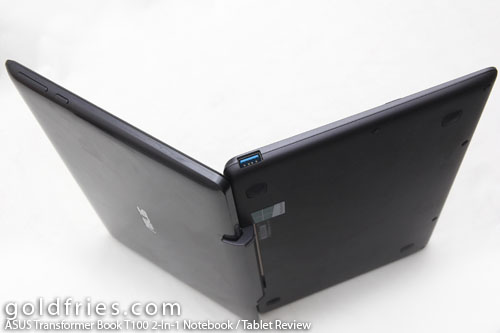 On the right, no ports on the dock but you’ll have a Micro USB port, Micro HDMI port, audio output port and the MicroSD slot on the tablet. 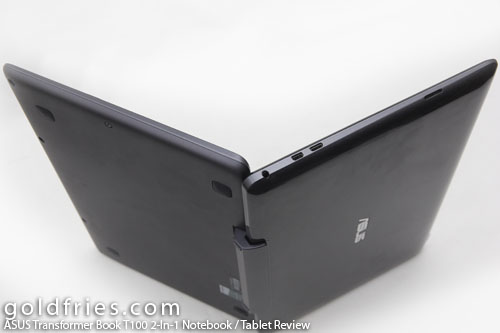 Speakers are placed at the back, one speaker on each side of the tablet / screen. 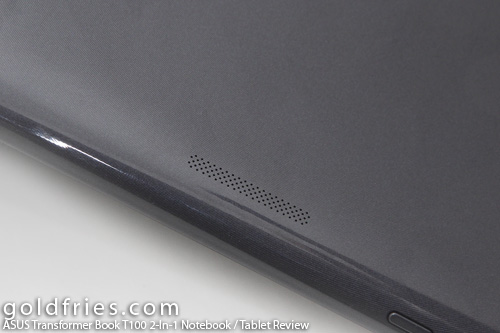 Here’s a quick view of the specs. 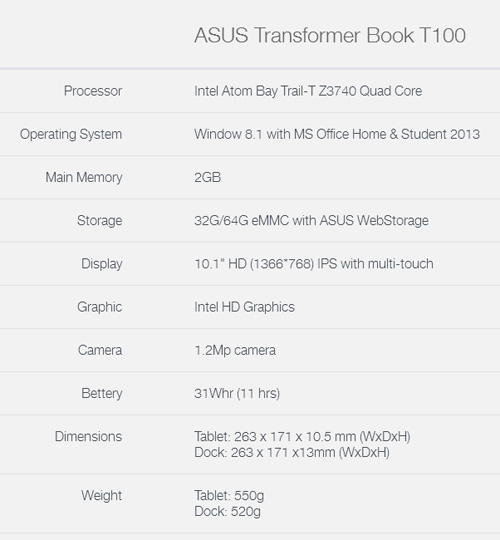 The audio is decent but not great, the screen is IPS so the color output was good.

The system comes 31Whr 2 cell battery that promises 11 hours battery life and from my experience, 11 hours is entirely possible.

The battery life reached 65% approximately 4.x hours after I disconnected from the charger, that’s after using having it on for most of the time as I installed Torchlight II and even played the game for some 15 minutes or so.

Prior to that, I had installed Battle.Net and was about 5% way through with StarCraft II that I realize it took up a lot of space and decided to cancel the installation.

Imagine, to only have drained some 35%+/- after 4.x hours of game installation at full brightness with data transfer going on. By the time the battery reaches 50% it should be approximately 5+ hours into usage so it’s not surprising it can go up to 11 hours.

Regarding gaming – it didn’t do well even with a light game like Torchlight II. Low details at 720p resolution remains unplayable, nevertheless that’s not to say it’s not good but clearly it’s not made for gaming. Don’t expect lightning speed for video encoding for same day slideshow 3 hours down the road but it’ll work just fine for web browsing, replying E-mails, office productivity suites and even for preparing some photos should your line of work requires it.

I’ve had no problem playing 10bit 720p MKV files with MPC-HC either, there’s no lag to it.

The beauty of this device is that it charges with Micro USB cable BUT there’s a downside to this. Using a standard charger (eg the one that comes with phones, around 1200mA) the device takes awfully long to charge, approximately 10% per hour, it comes to about 10 hours to fully charge a device.

So how much would you pay for this device? 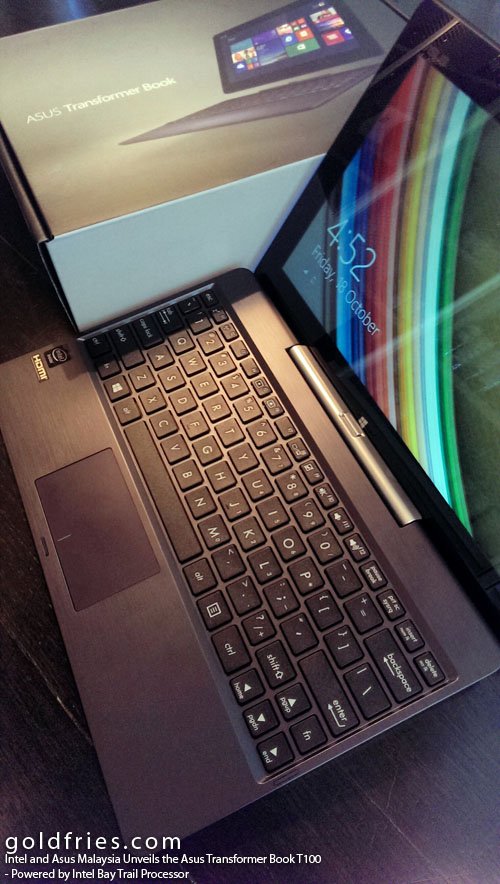 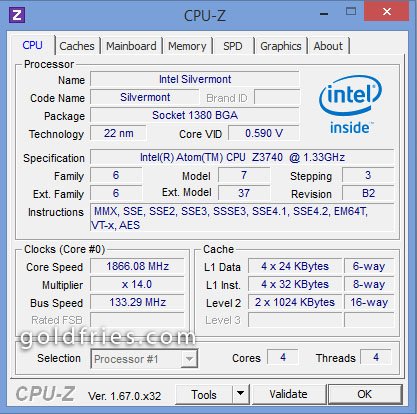 At that price, I’m more than willing to forgive the assembly issue of the hinge but I do hope they improve on that part.

2013-10-21
Previous Post: DDR3 vs GDDR5 Graphic Card Comparison – See The Difference with the AMD Radeon HD 7750
Next Post: Your Smartphone Could Make You A Crime Victim