2 years ago I reviewed the PM01 from Silverstone, it was a good casing and I still have it housing one of my computers – in fact 2 of my computers are of the PM01. Early this year I received the PM02 which is very unlike the PM01, and dare I say that the SilverStone Primera PM02 bears little to no resemblance to the PM01 at all. The only thing similar would be the glass panel and the PSU cover. 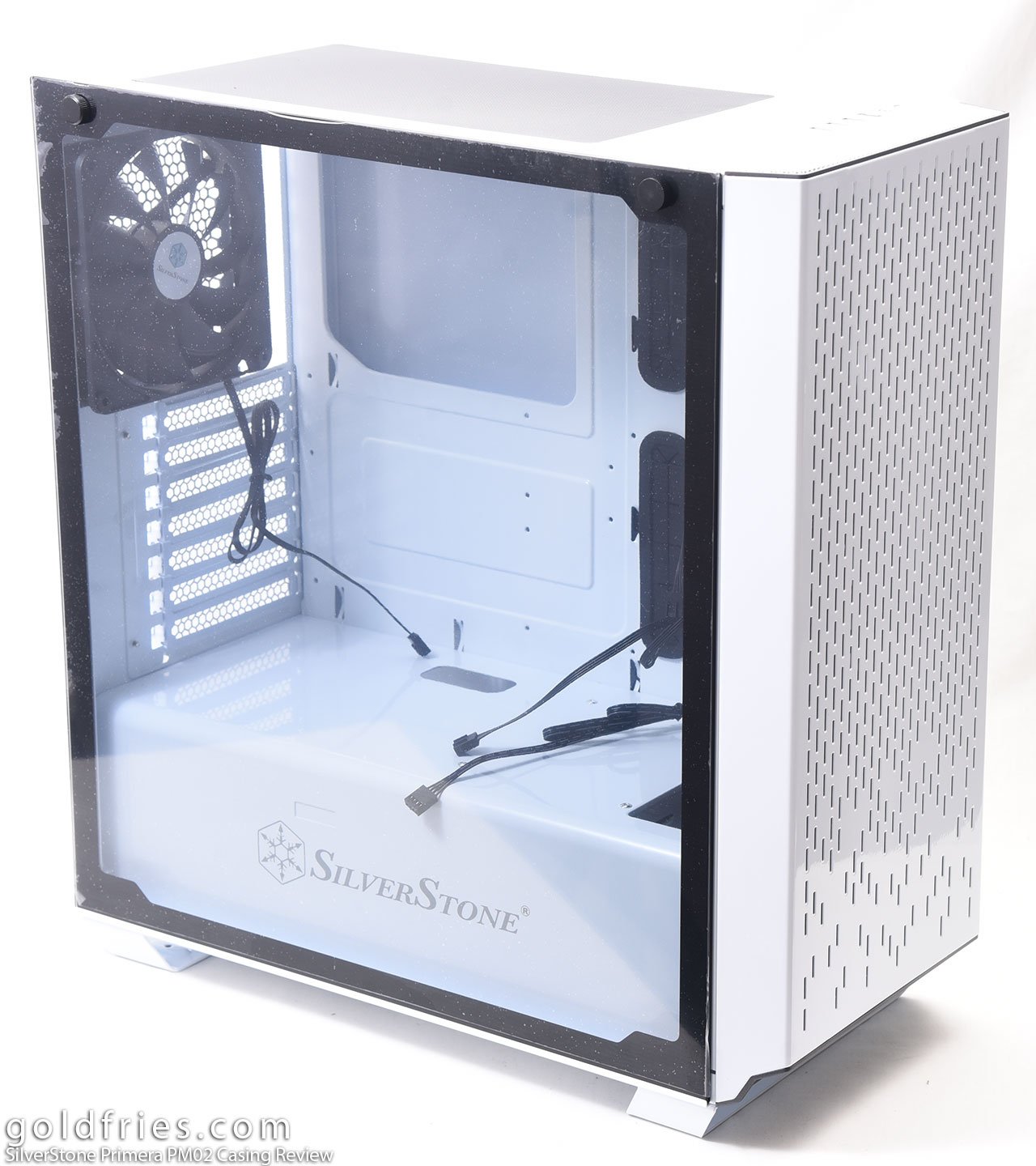 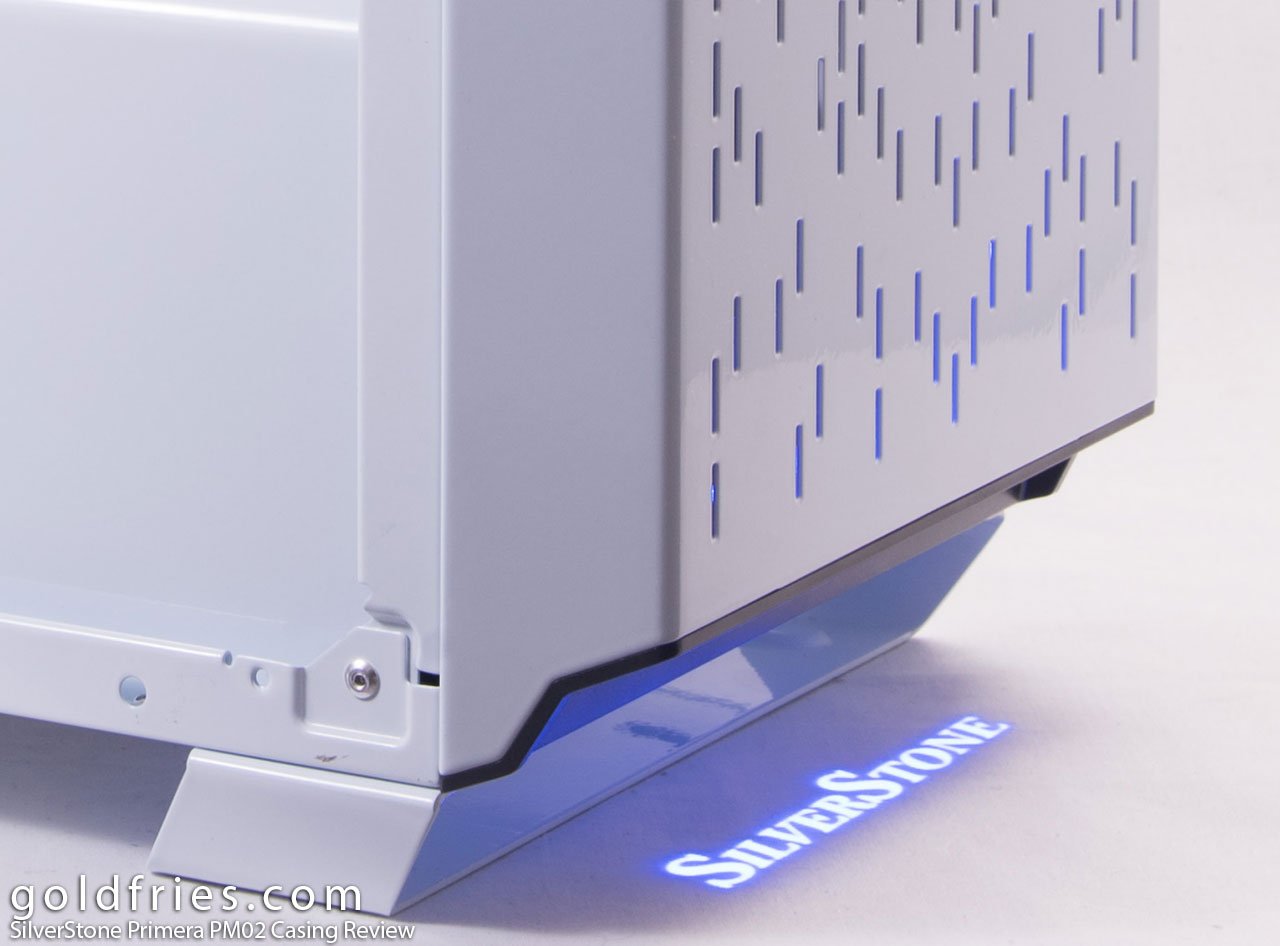 Here’s what the front panel looks like, which is a solid steel piece that you can make it into a shield or armor for cosplay. The dust filter is a component that one expects a casing to have but what I didn’t expect is that the SilverStone Primera PM02 comes with 3x 140mm fans. I love 140mm fans for the lower RPM and less noise generated, totally appreciate this move by SilverStone but on the down side this casing doesn’t come with any fan hub so getting them all connected to PWM source is extremely difficult. 🙁 The only way to go about is to acquire a PWM fan hub, SilverStone has one. 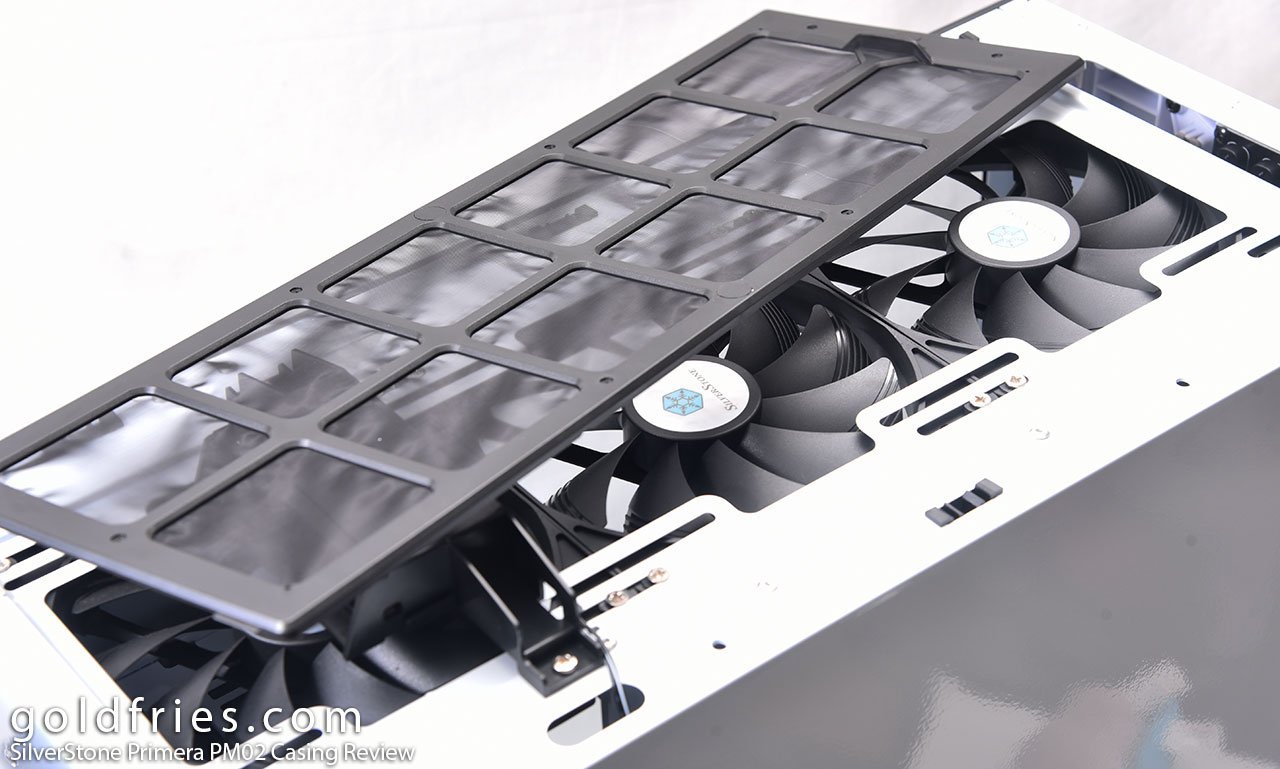 The dust filter at the top is poorly thought of, considering the magnets are laid around the edges of the filter thus coming into conflict with mounting screws that hold any cooling components at the top. 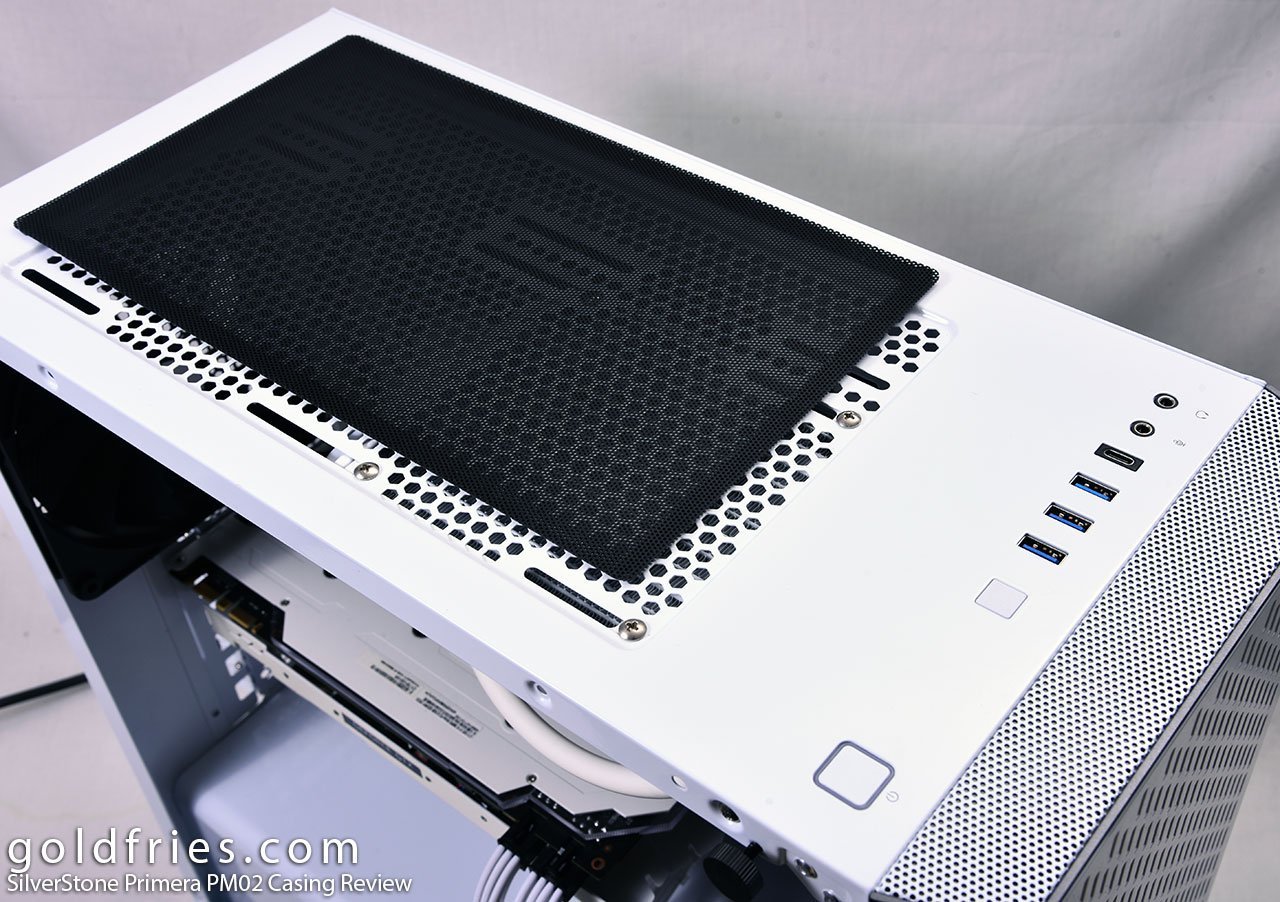 Here’s a photo to give you an idea on how bad it is when the magnet is in conflict with the screws. 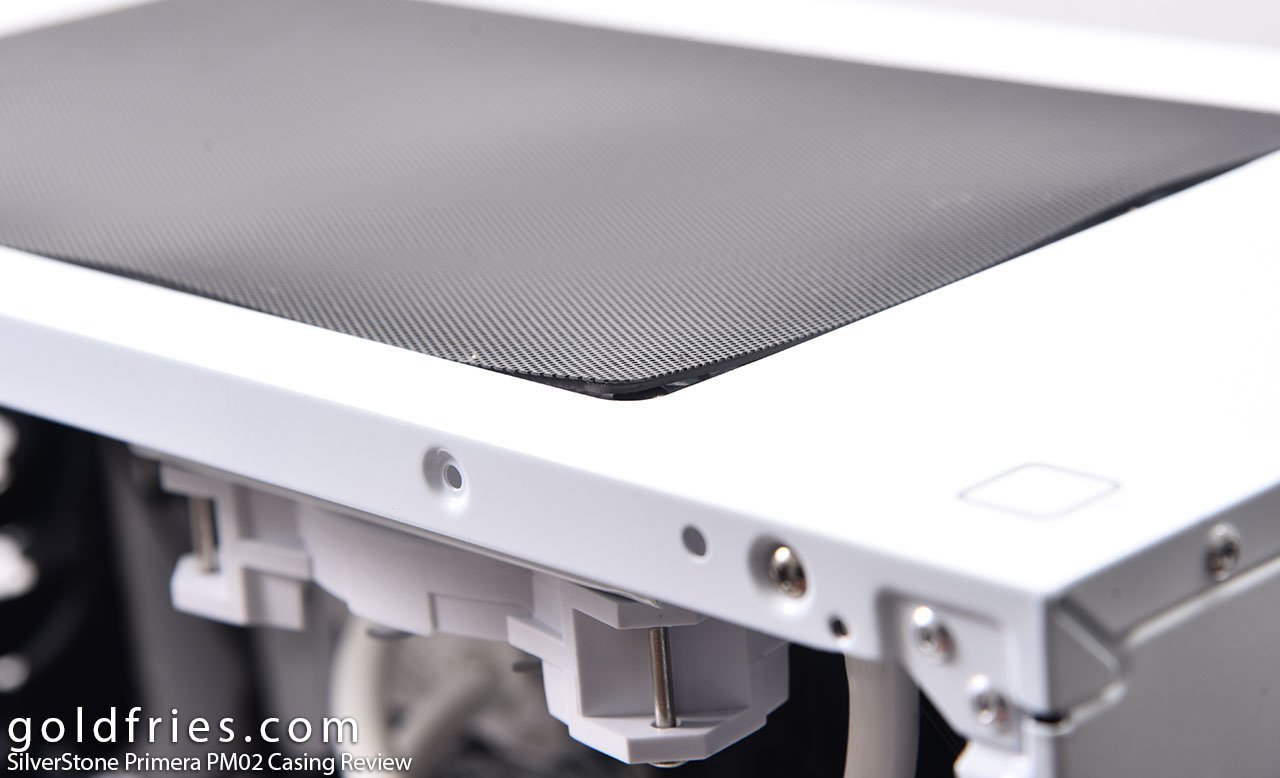 Next up the rear view, my only complaint here would be the locking mechanism for the PCI-E slots of which I think could’ve been better. I’m certainly not a fan of having to unlock one locking piece before being able to access the components.

Another point to note is that the support for PSU doesn’t handle rounded-edged PSU well, you will still be able to secure it with a little effort. 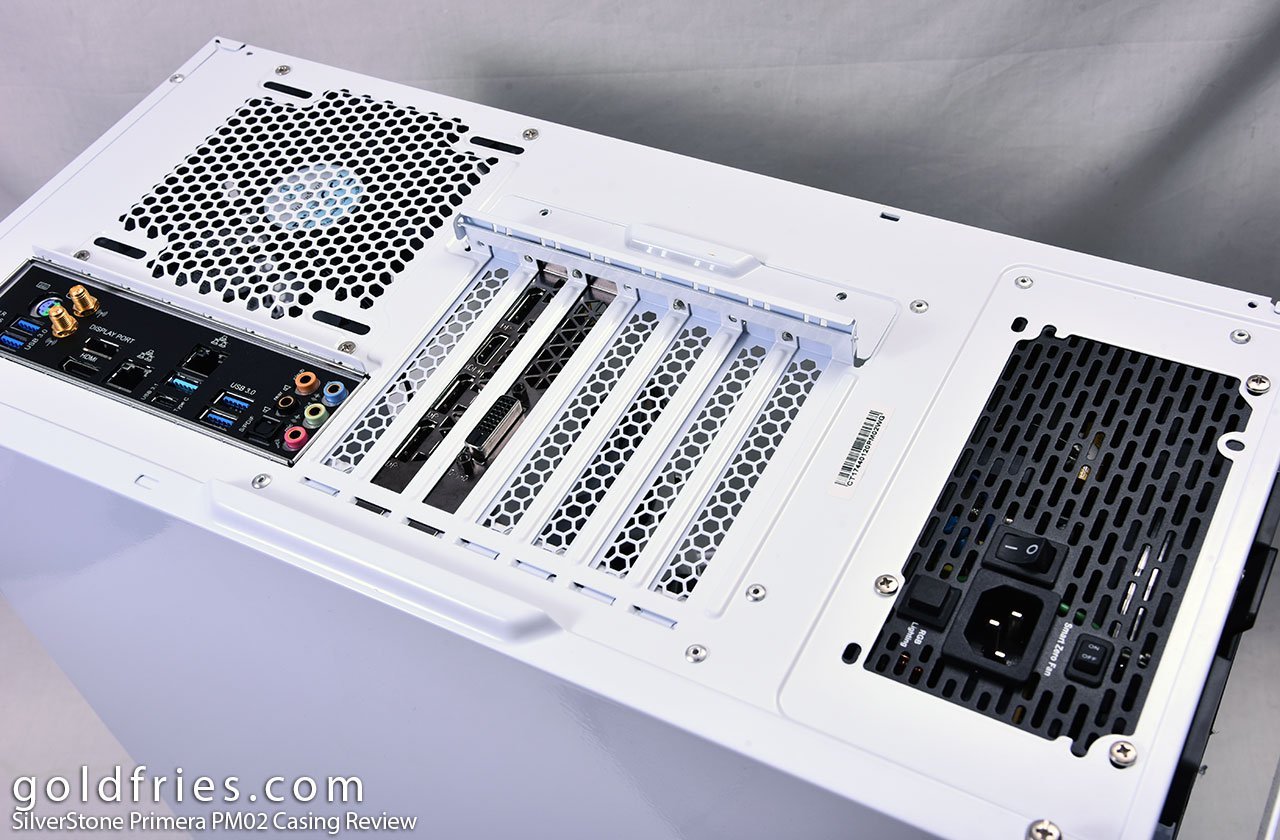 This is the under side of the SilverStone Primera PM02 – it has just 2 feet, the front and back and both stretch from side to side and have tiny rubber padding at the corners. Notice also the SilverStone logo at the projection output. 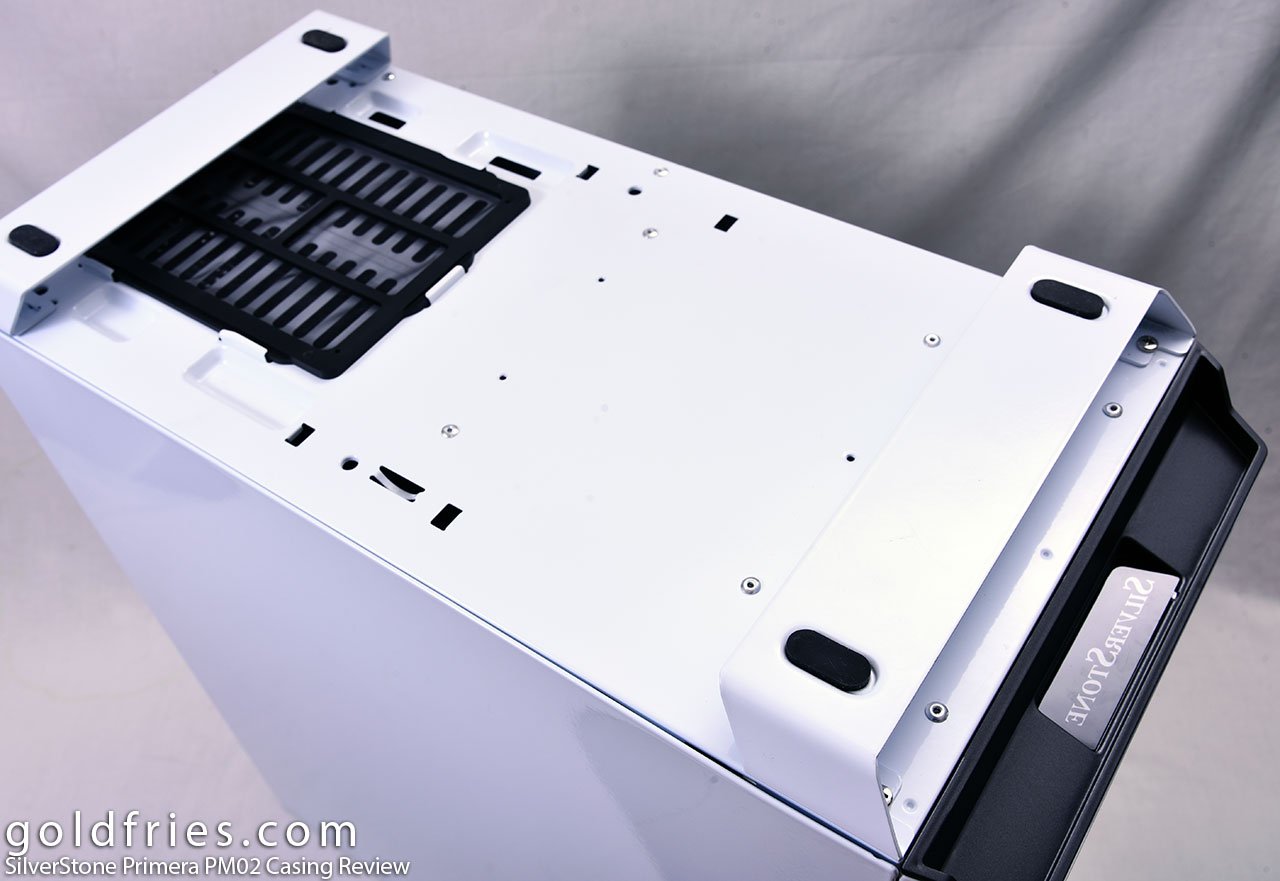 Unlike the PM01 models, the tempered glass of PM02 is secured by 2 screws at the top while the bottom is held in position by the steel formation. 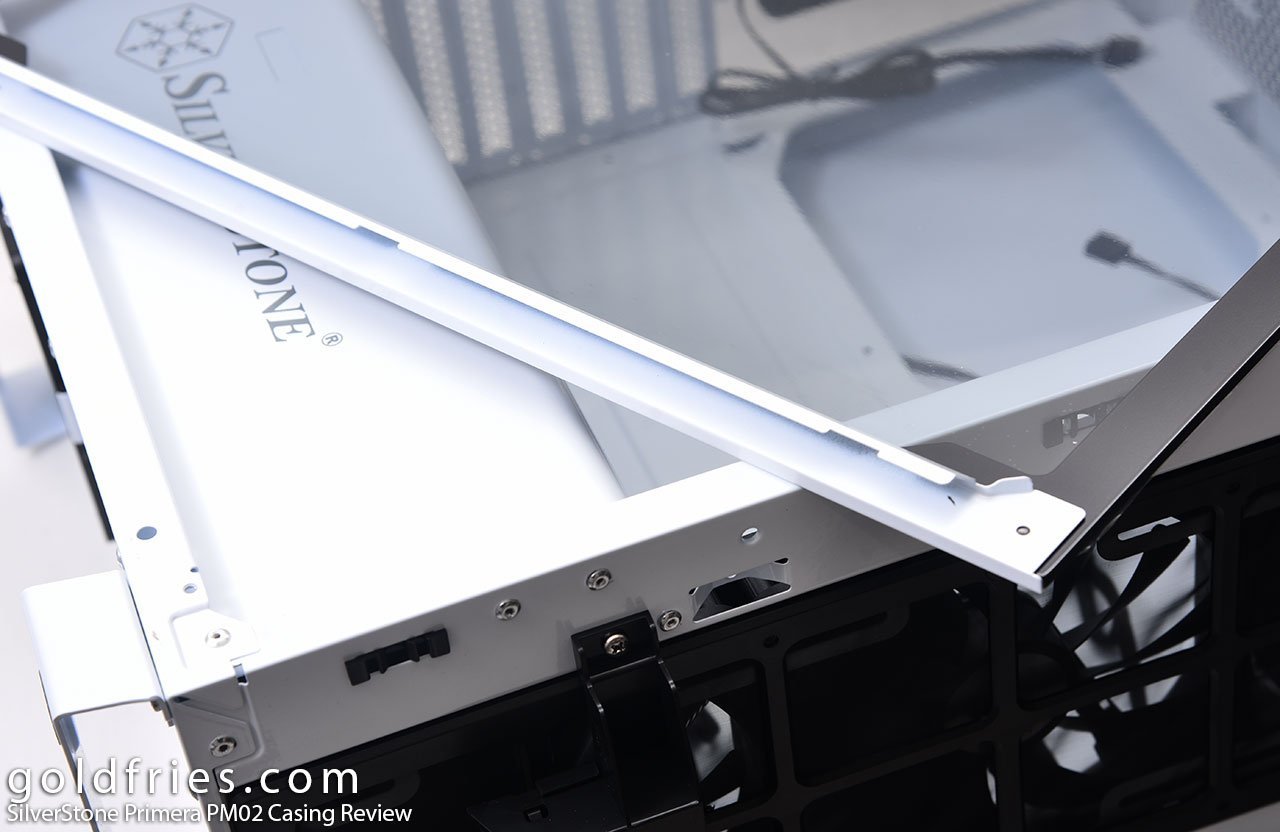 Interior for the SilverStone Primera PM02 is spacious, at least it seems to. I’ll go into the details a later. 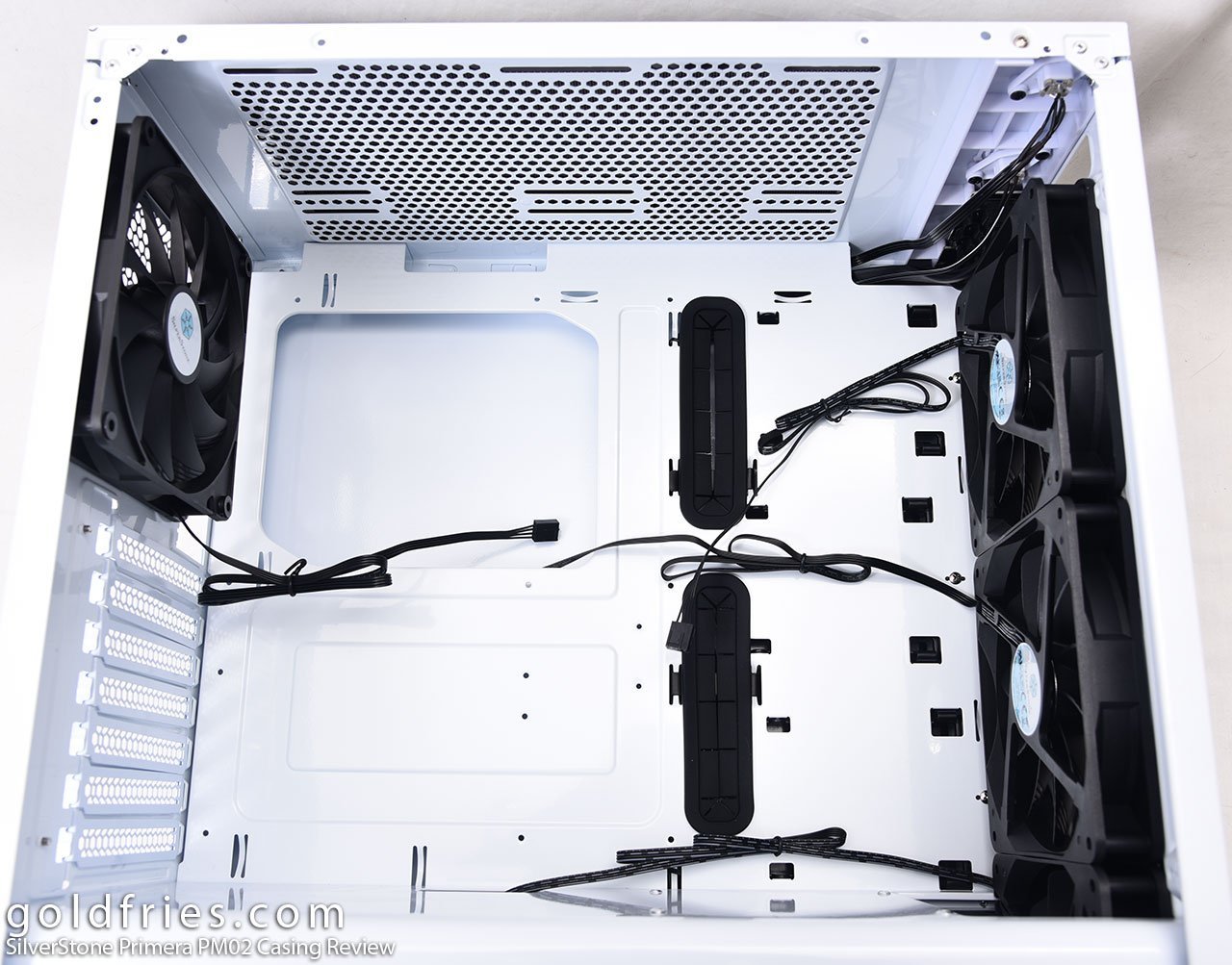 At the front are the 3x 140mm fans. I’ll say it again – I appreciate SilverStone for including 3x 140mm PWM fans but it’s not helping when there’s no hub. To make things a little worse, the casing lacks any form of opening for me to route the fan cables around.

At the rear there’s another 140mm fan which is something I appreciate as well, note also in this picture that the clearance between the board and the top of the casing is very little. It’s so little that you can’t fit AIO units at the top without having any conflict. 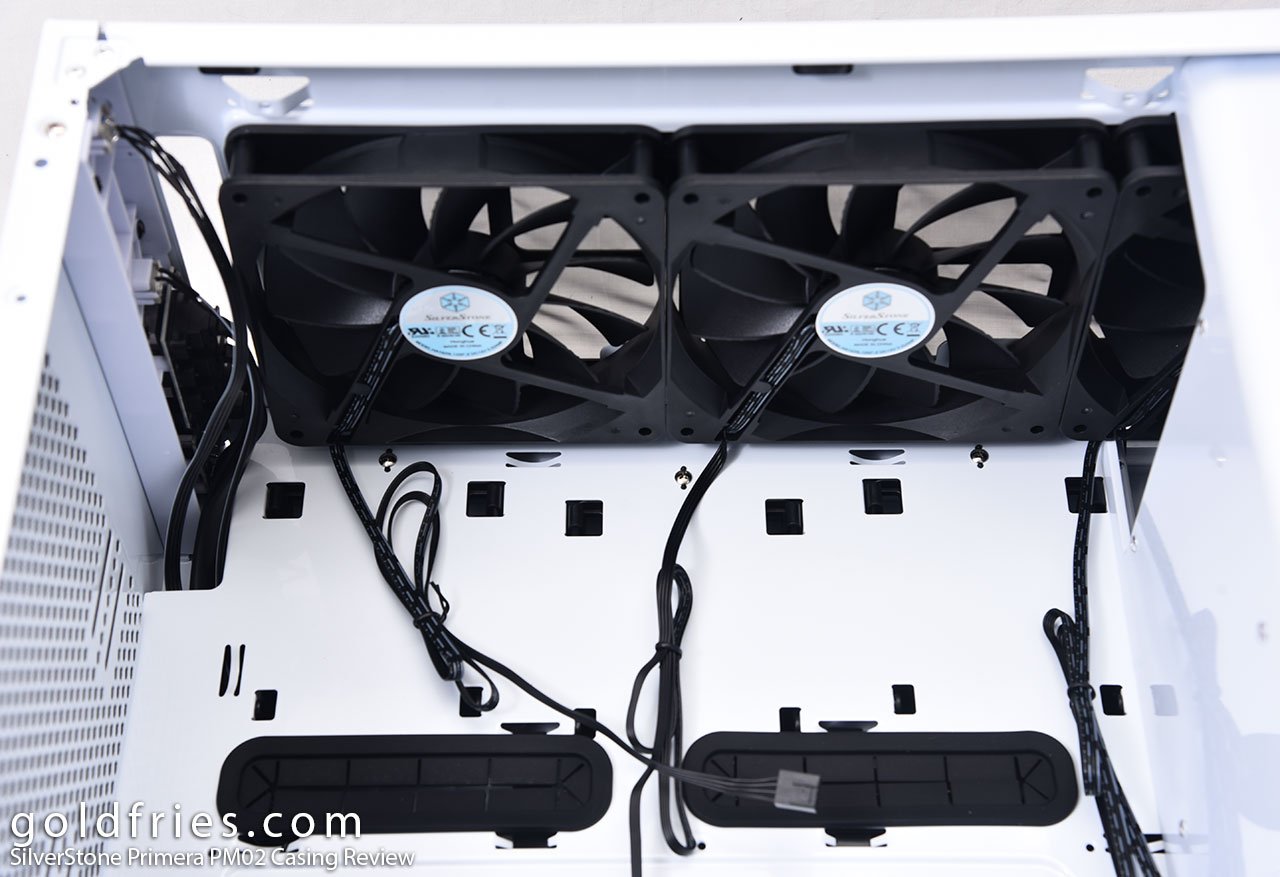 This is what it looks like with my ASRock Z270 Taichi motherboard and AVEXIR LED RAM, the clearance is so bad that even with lower profile RAM models I’ll likely to have conflict. Even with tiny gap it means I can’t remove the RAM without first removing the fan of the AIO.

Vice versa, if I have tall RAM types it means I can’t use any AIO. Mind you this is just a 120mm AIO unit. You are able to fit up to 2x 140mm fans fine, just AIO and radiator units are just a big no no. If you insist on using a larger AIO or custom water cooling, your only option is to mount the radiator unit towards the front. 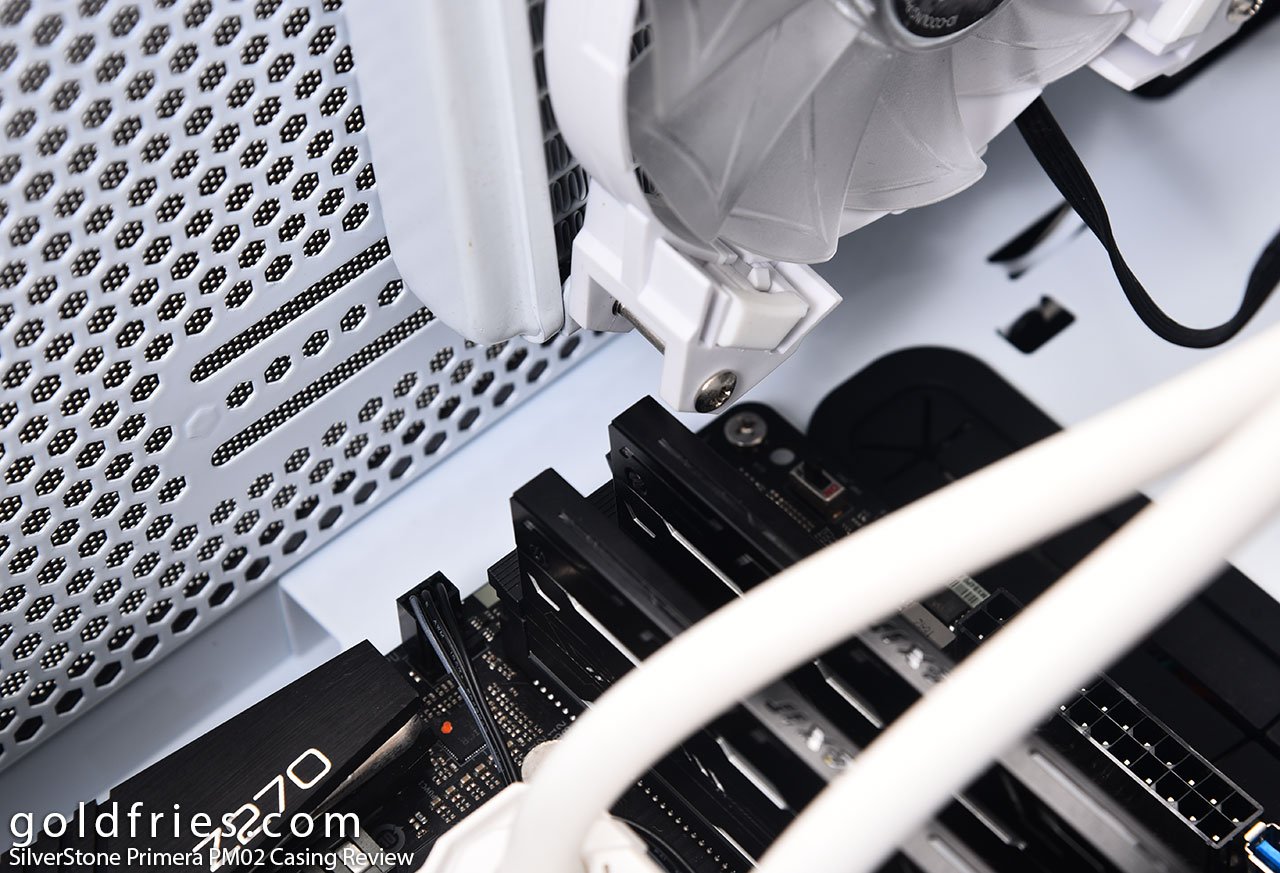 The SilverStone Primera PM02 comes with rubber grommets for the cutouts, they’re large and plenty to get cables going through. And one last thing – that super huge logo is totally unnecessary, I’ve not seen any brand shout their logo in such a huge fashion. I can’t help but notice that there’s this tiny rectangular area just above the ‘S’, I have no idea what it’s for and it sure is ugly. 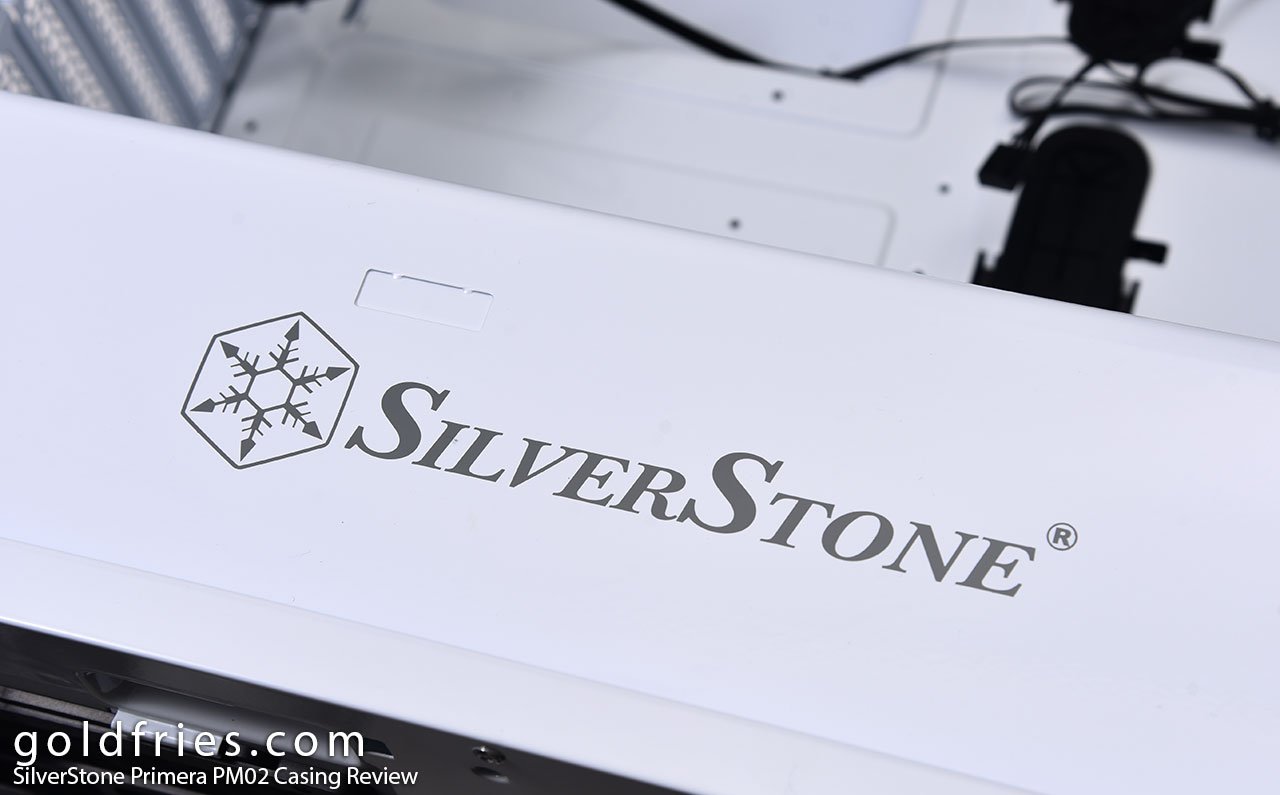 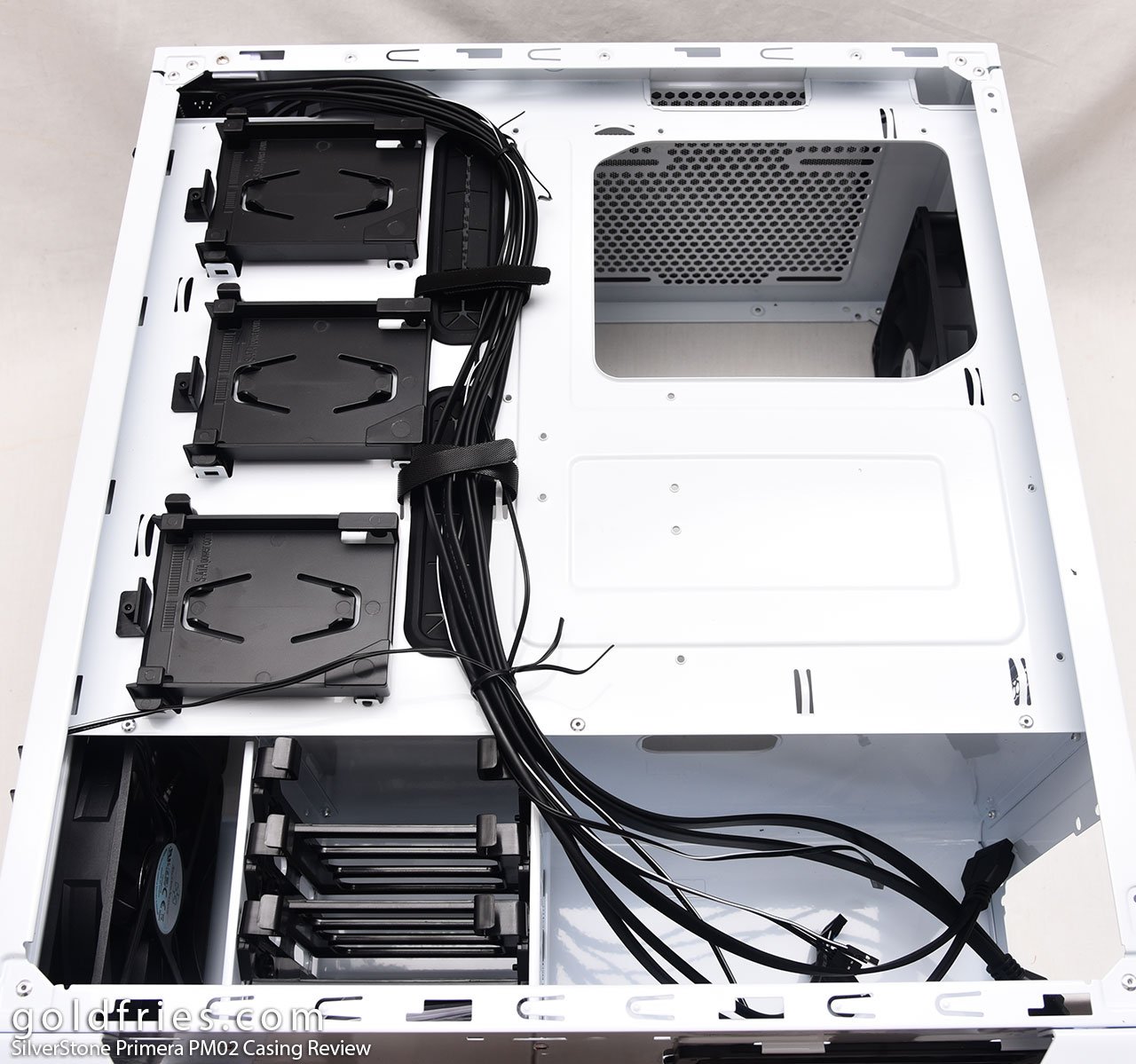 So is there any good to the PM02 other than the looks, the build quality and the reasonable price? Yes there is. Check out my test here regarding the airflow capability, it’s so good it can run my processor on fanless / passive cooling.

The SilverStone Primera PM02 retails at RM 469 – Does it look attractive? Yes it does, it’s just unfortunate that the PM02 is riddled with flaws that made me wonder – do SilverStone’s designers actually setup a functional system before sending it for approval? And how did it got approved anyway? 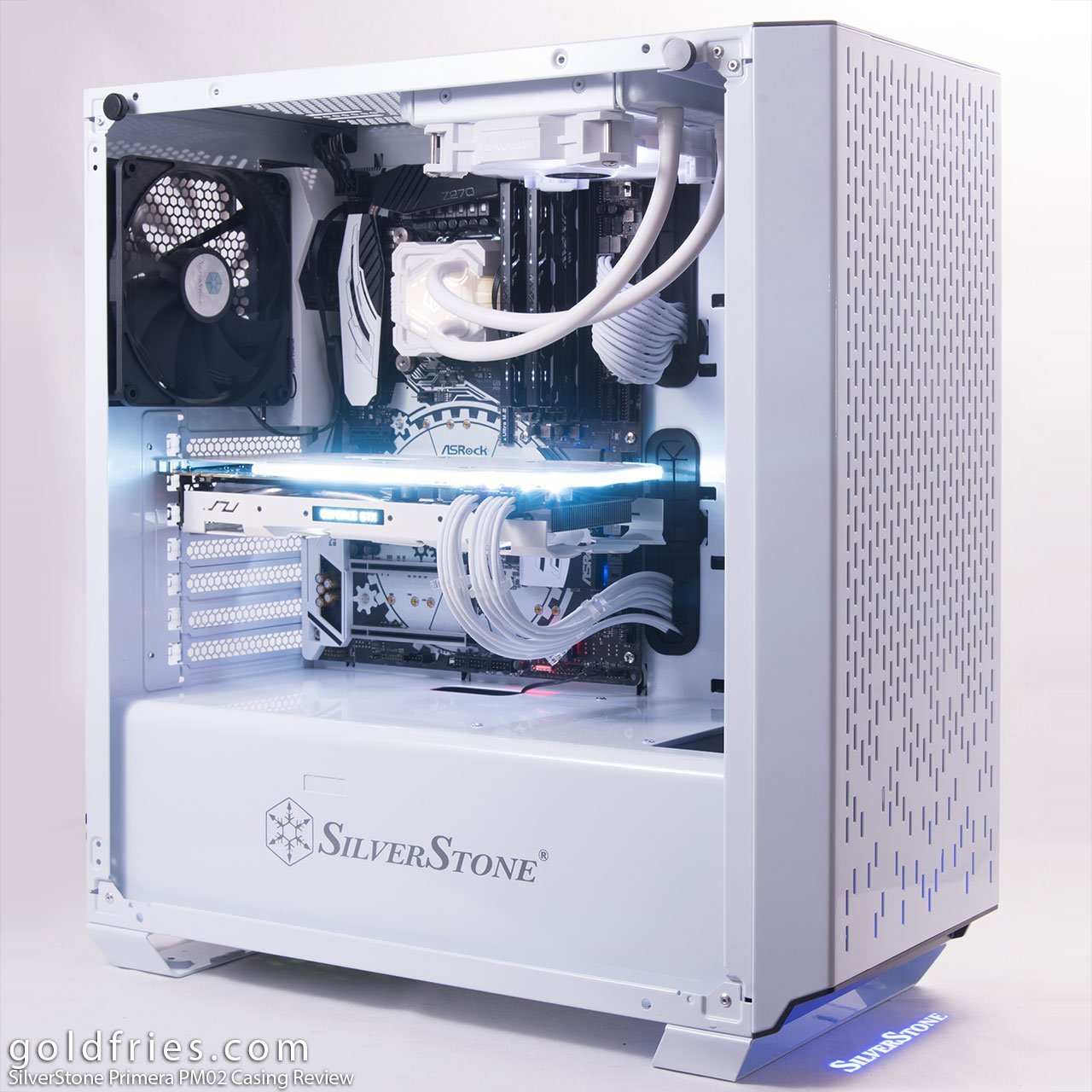 You can’t claim support of up to 280mm radiator at the top (as seen on the official product page) when the product is unable to do so. 🙁 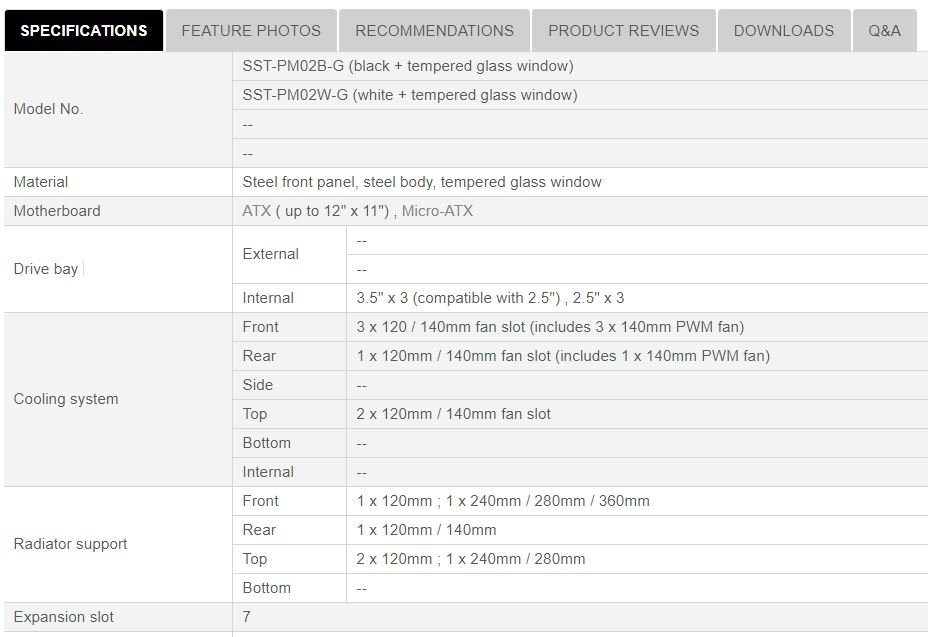 The PM02 has great build quality designs flaws that hinder installation of components is not a good thing. Design wise the PSU shroud could’ve been better designed by using smaller logo placed at a corner, and with that rectangular cutout removed. The projected logo would’ve been great if one can customize the output, or even have the LED color changed. I don’t mind this as a bonus but if removing it results in lower price, I’d rather be without it.

Lastly – fan hub, where is it? I love it that I have 3x 140mm PWM fans at the front but how do I connect it? There’s no way for me to use those fans unless I have a PWM fan hub, or if I’m using a board like the Z370 Aorus Gaming 7.

To sum it up – The SilverStone Primera PM02 is a terribly flawed product, even its beauty can’t salvage it. The only consolation I am able to come up with for the PM02 is that it has potential when it comes to case modding and that it has superb airflow as long as you have a board that caters to all the fans, or you have a PWM fan hub.