Leveling up their game in the arena of mechanical keyboards, Cooler Master launched the MasterKeys Pro series of keyboard not too long ago – available in 2 layout, the Pro L for full-sized keyboard while the Pro S in this review as the tenkeyless model.

The keyboard’s key cap quality is good, I like the glossy smooth feel on it and I like that it doesn’t feel cheap. 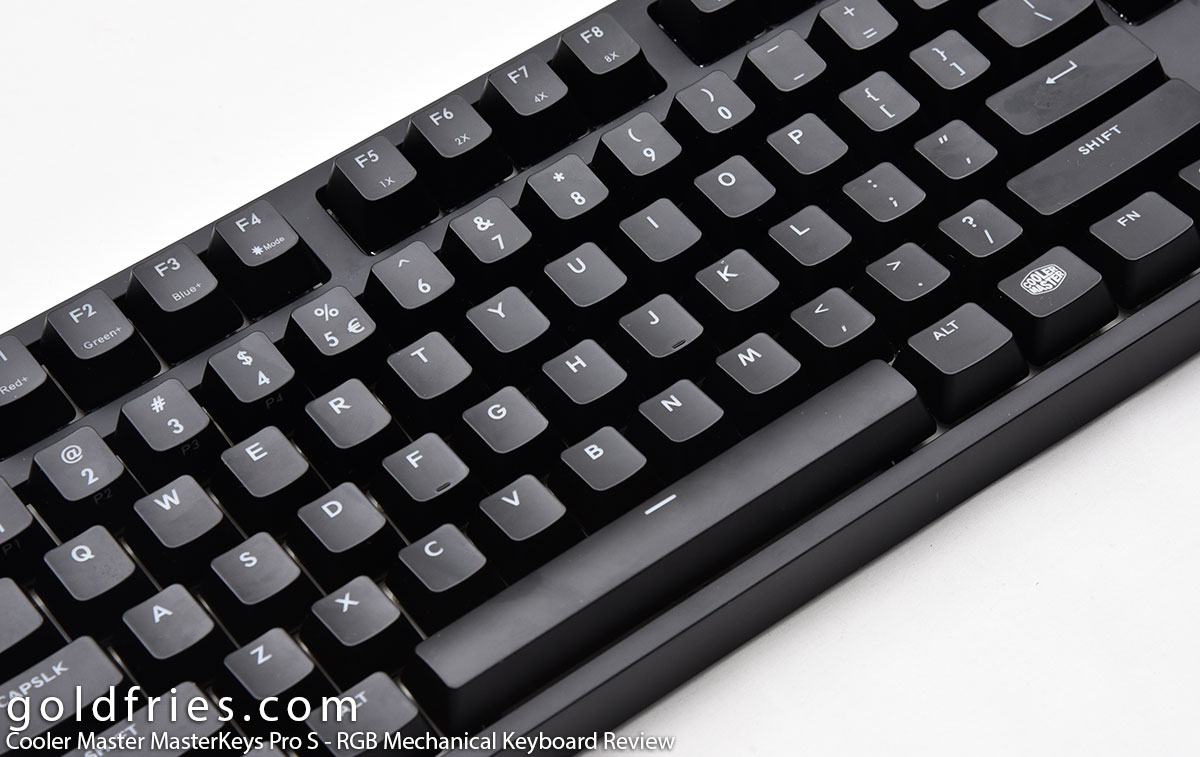 What makes the MasterKeys Pro S special is the build.

Besides using CherryMX switches, the MasterKeys Pro S was designed as such to accommodate larger sized RGB LED and has cutouts on the PCB to allow more light to pass through, giving better illumination. 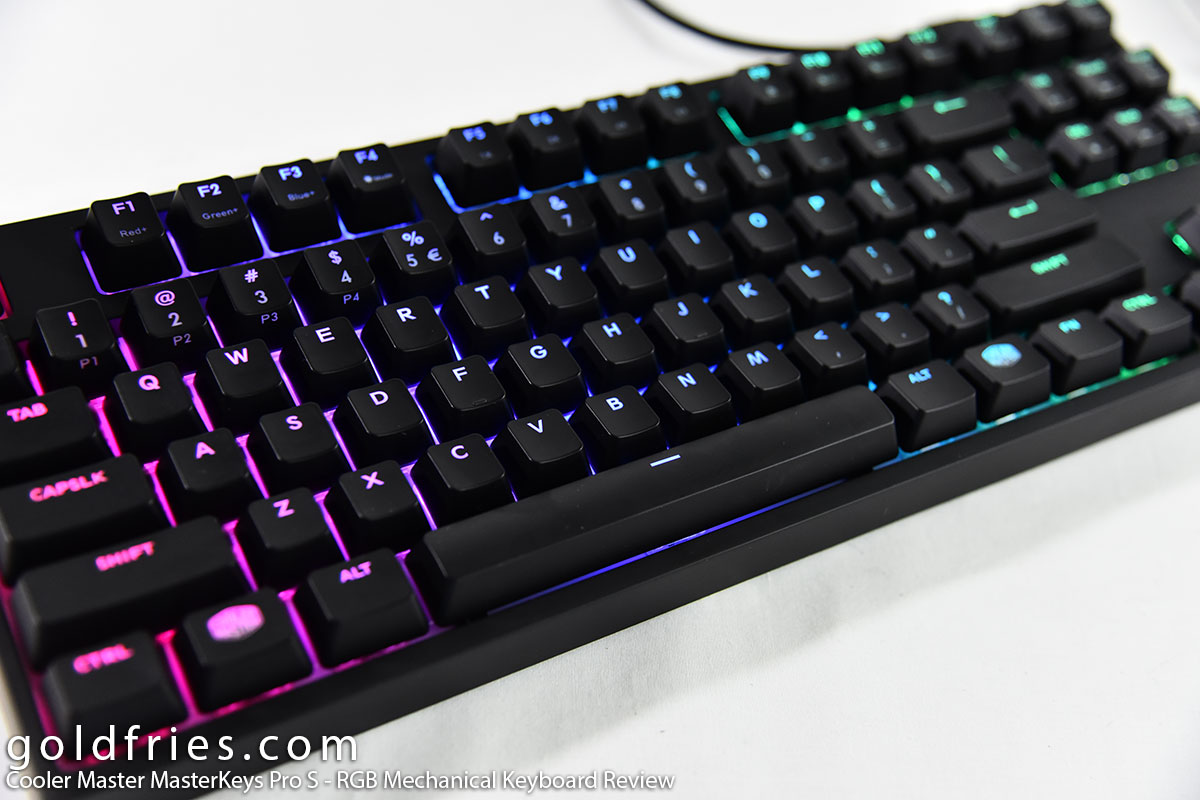 The model in this review comes with CherryMX Red switch, Blue switch and Brown switch models are available too. 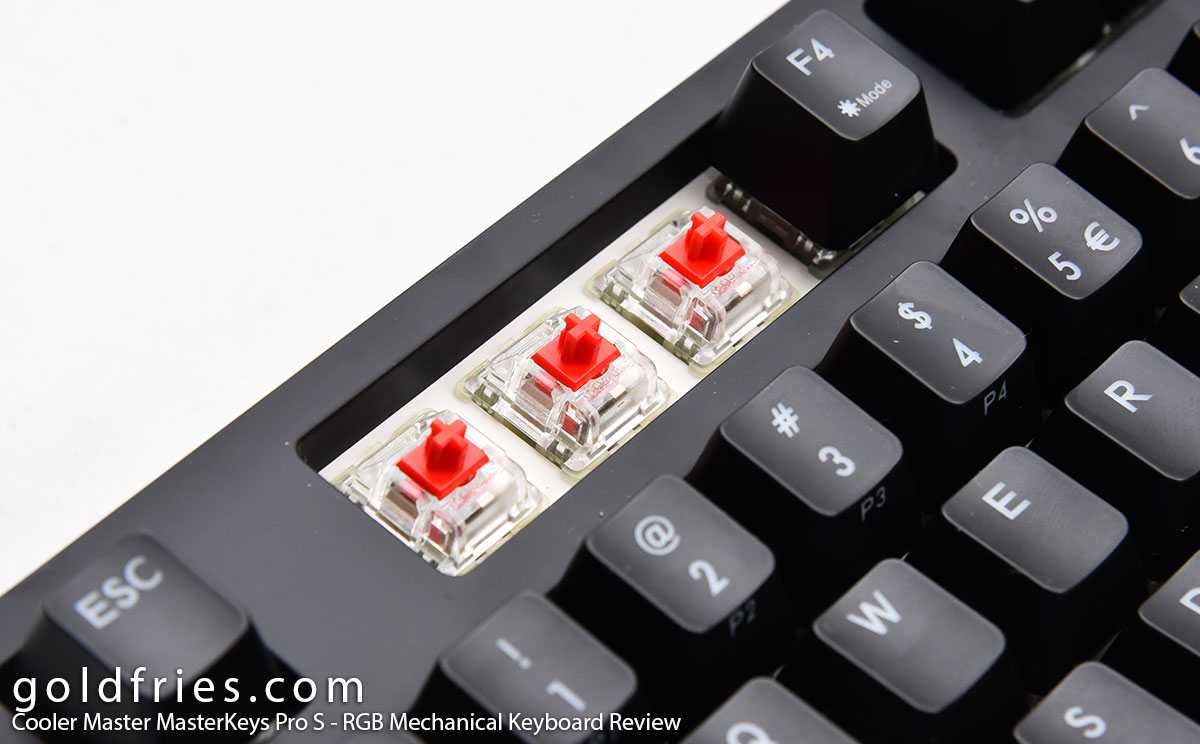 At the bottom the MasterKeys Pro S comes with rubber feet on both the body and the legs. 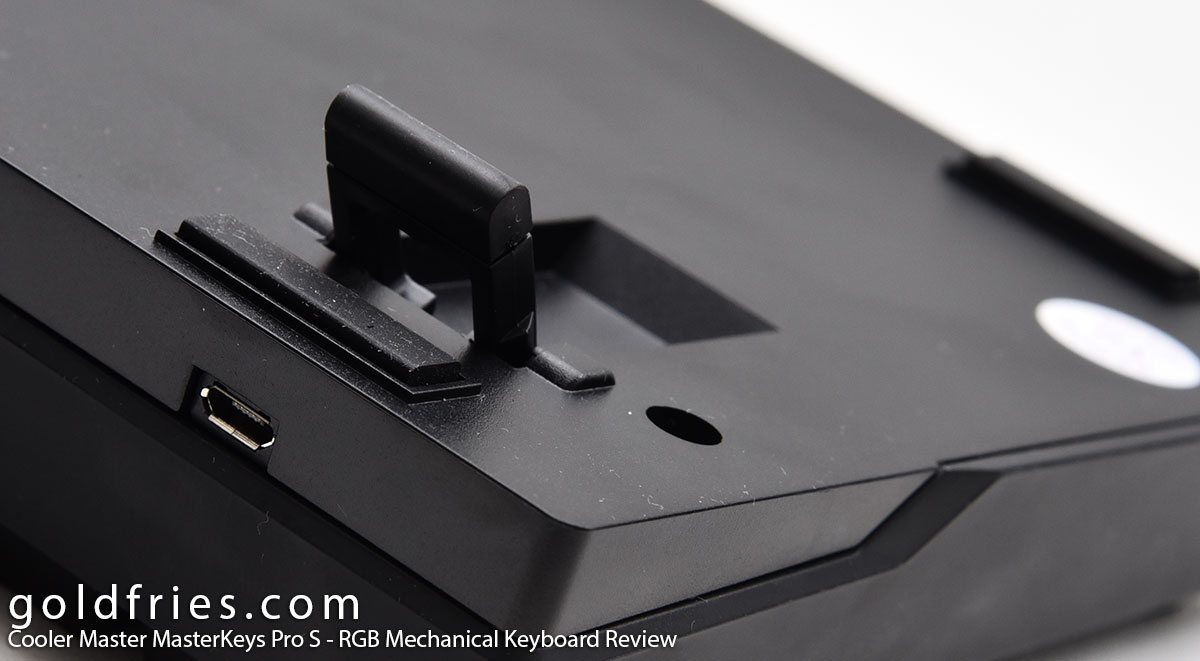 The MasterKeys Pro S connects to the system via Micro USB cable. 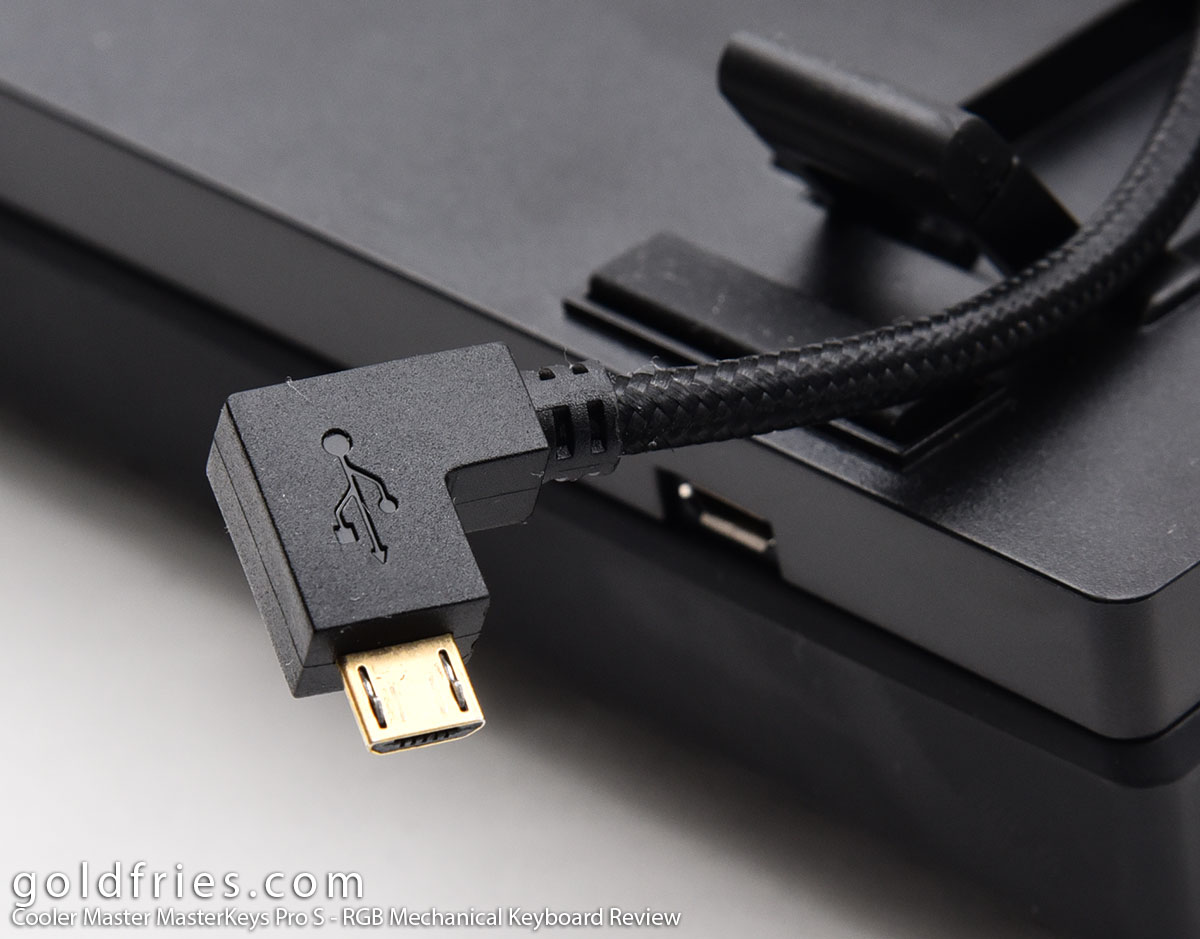 The MasterKeys Pro is outfitted with the most powerful ARM Cortex M3, this allows it to execute commands and macros without the user having to worry about load time. The processing power makes it even better when it comes to on-the-fly System adjustments to LED lighting modes, repeat rate adjustment, multimedia keys, macro recording, four profile keys without having to reach out to the software.

When holding down the FN key, you can see what profile and repeat rate you’re currently on, as well as whether or not the windows lock is activated. Youâ€™re also able to see the brightness levels of colors you have selected for the red, green and blue keys.

Full specs as below, taken from the official product page. Even so, that took me quite a few tries. It didn’t work on my first installation, then I tried it on another machine and it didn’t work either. I went back to the original machine and then it works. I would say the first and most critical flaw is that there’s too many steps. 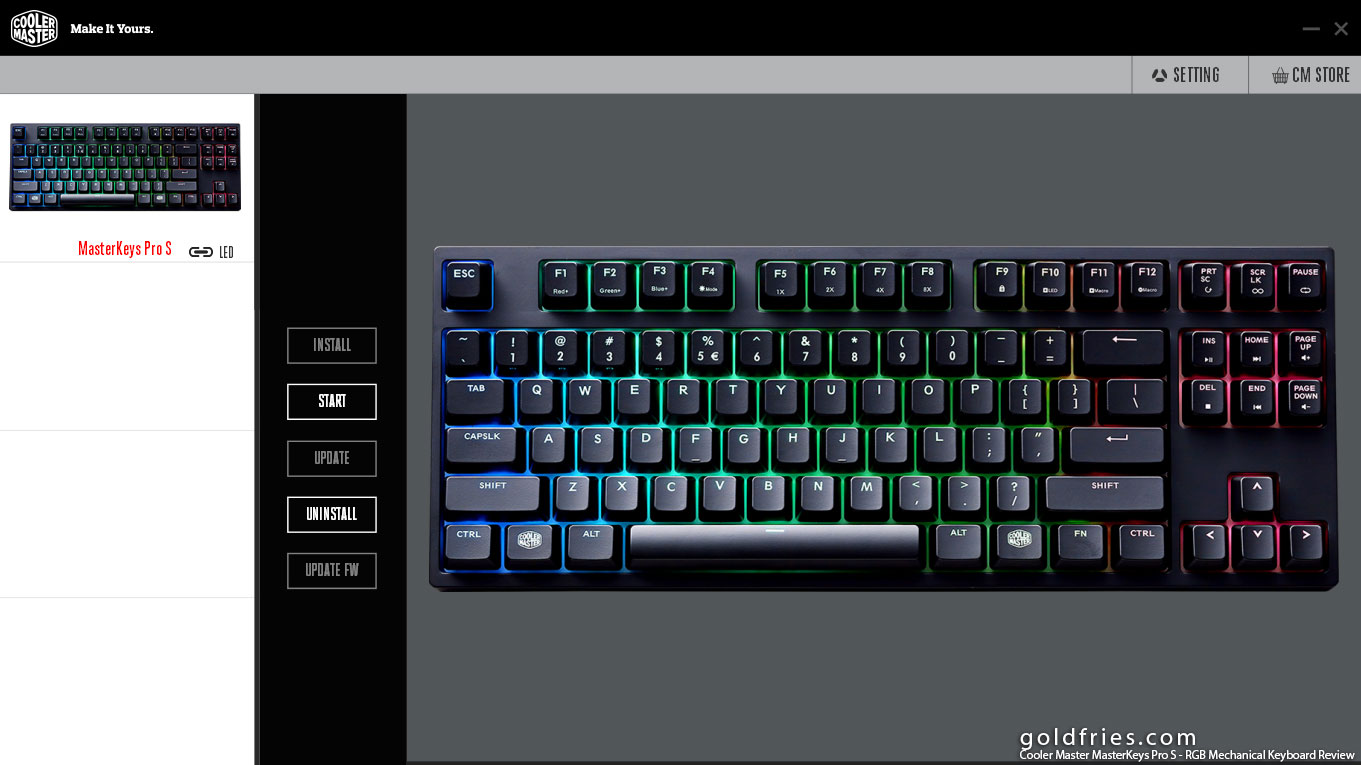 By now we’ve been through more steps than other IO device control software in the market. After the installation is done, it doesn’t mean that the MasterKeys Pro software would run, I experienced that on no less than 2 machines, and somehow finally it worked in the end. In some cases, the software fails to run after you unplug the keyboard, so a restart is required. 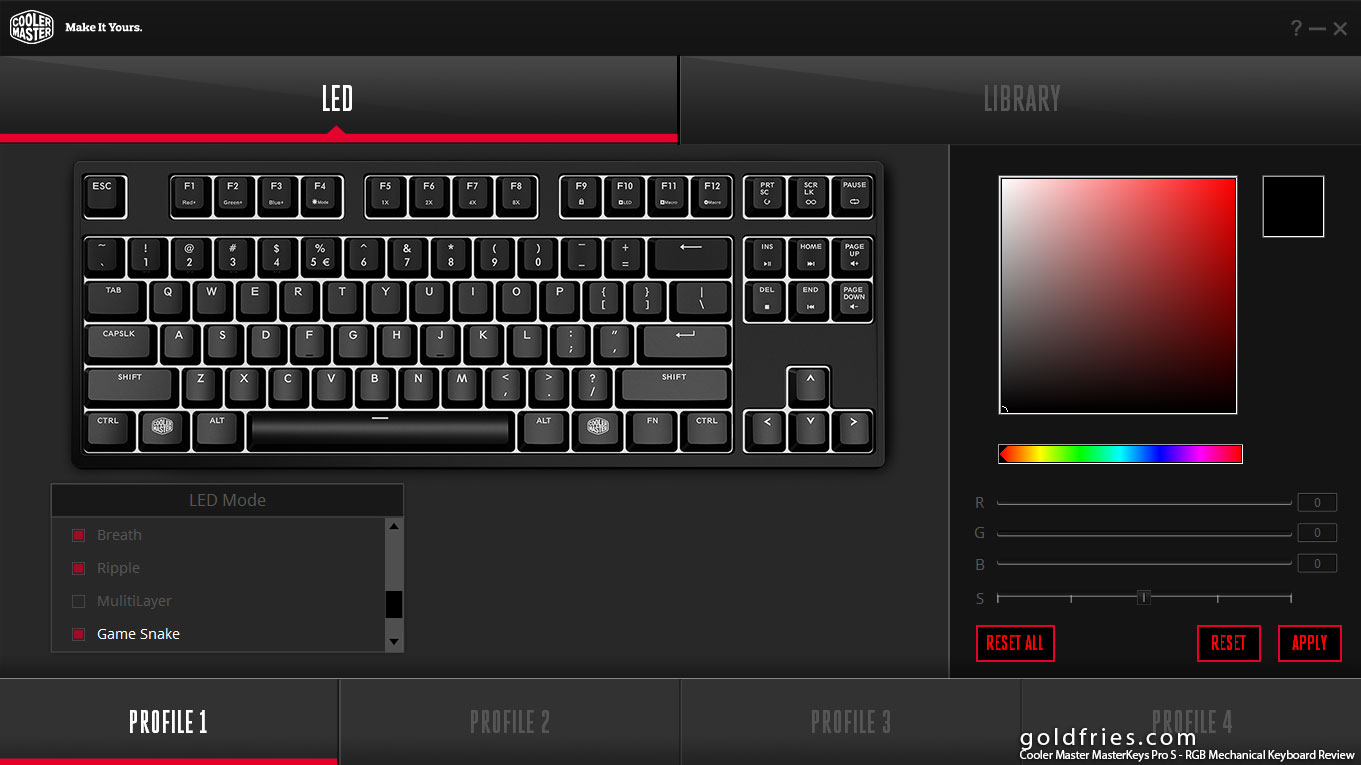 Should the software be up and running, you’ll now see 2 Cooler Master icon on system tray and taskbar, which is really annoying because all I want is to run a software. I would like a unified software, not one software that downloads another and run concurrently. Cooler Master could learn a thing or 2 from Corsair and Logitech when it comes to software.

Now once it’s up and running you’ll be free to customize the effects on the MasterKey Pro keyboards. The best part about the Cooler Master software is the Multi-layer option of which you are able to assign different effects to different parts of the keyboard. Set the Function keys to Color Cycle, set the center rows to Color Wave. Have the numbers row assigned RAIN effect and the arrow keys Single effects. It works great but it’s not perfect, the Multi-Layer option only allows you to choose an effect once. So if I want to have 2 rows of static lighting in different color, I can’t do it because the software says so.

Another effect I like is the System Status of which the keyboard LED responds to CPU load and Audio Output. The flaw of this setup is that the effect is always rainbow colored, starting from Red at the top and it goes orange, yellow, green and blue at the bottom. This might be correct when it comes to indicating colors like heat readers but it’s just too bad one can’t have it based on a single color like how audio equalizers are. I also wish that Cooler Master made the feature work with other sensors like GPU load, GPU temperature and so on. After all it has a fast processor, processing all these data shouldn’t be a problem.

Software aside, the keyboard is great to use. I love the keys, the response is as what I would’ve expected from one that uses CherryMX switch.

The Cooler Master MasterKeys Pro S – RGB Mechanical Keyboard retails at RM 569 and comes with 2-years warranty. What you get, aside from being the usual mechanical keyboard, is the beautiful RGB system that’s brighter than any others in the market and it comes with software support that allows you a whole lot of customization of the RGB lights. After all – what’s the point of having RGB lights when it’s just presets?

Put it simple, the price tag is such simply because you now have control over the lighting setup, something many RGB keyboard makers are unable to provide. Satisfaction? You will be satisfied.