Here are the GPUs 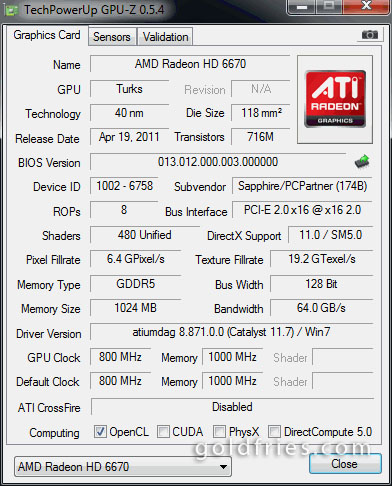 Normally I’ll summarize at the end of the benchmarks but not this time – you’ll see that I’ve included the 1080p benchmark for the 6690D2, that’s because I was so impressed with the combination that I decided to do the 1080p tests just for it. FYI the benchmarks were all done in 720p ONLY as it doesn’t make sense to even use the 6670 nor the 6550D on Full HD resolution. As you can see below, they’re practically crawling (unplayable) at 720p with no anti-aliasing.

The crossfire setup allowed the system to perform close to what the HD 6670 does at 720p.

While the HD 6670 was way ahead of the HD 6550D, their combined power brought even more framerate for 720p resolution and made 1080p just barely playable!

Stress test was done using Lavalys Everest, stressing the unit for about 5 minutes at around 25Â°C. What surprised me was that the processor actually shows 9c on HWMonitor. I couldn’t believe either, not sure if it’s just the motherboard’s reading issue but it really does show 9Â°C. I couldn’t even get an idle X3 to go below 20Â°C with water cooling!

Anyway operating temperatures are good, it was only about 64Â°C on full load. 🙂 The 9Â°C screenshot was taken when the room was about 22Â°C. At 25Â°C the reading shows the processor temperature fluctuates between 12Â°C and 22Â°C.

Scary? Nah, don’t be. I just want to share a bit about my experience with the Llano’s installation / setup. The A8-3850 worked flawlessly with my MSI motherboard right out of the box, just load the drivers and it’s all smooth sailing.

I’ll just put it simple – use the Catalyst 11.6b driver if you intend to CrossfireX. Don’t ever use the drivers from the CD 🙁 Because of them, I’m sleep-deprived (2 hours of sleep over the past 48 hours) and had to delay the article by a day. Probably my writing sucks more than usual by now, considering I’m almost a zombie.

If you’re looking for a new system, this is a good candidate, especially those who loves playing computer games (and don’t mind the lower details) but stuck with a tight budget. The A8-3850 and board comes to only about RM 800 but you get performance about the higher-range Athlon II X4 processor but you do get a little more cache out of it. There’s also the A6-3650.

Besides that, there’s also the on board GPU which is pretty much the price of a graphic card that’s around RM 200 – 250 range – eg the Radeon HD 6570. If you already have a HD 6450, HD 6570 and HD 6670 – you can CrossfireX it to get a boost in graphic performance. This is perhaps THE selling point that makes AMD’s APU offering more attractive than Intel’s i3 processors. Furthemore the APU such as this A8 is a true quad-core.

On the down side – the A-Series works on the new FM1 socket. It’s good for those of you going for a new computer but for the rest of us who are already users of AMD based systems, you’re better off upgrading your processor to something like the X6 1100T. If not, wait for the Bulldozer that’s said to be using Socket AM3+.