AMD announced the Wraith CPU not too long ago, the cooler promised excellent cooling with low noise-level. 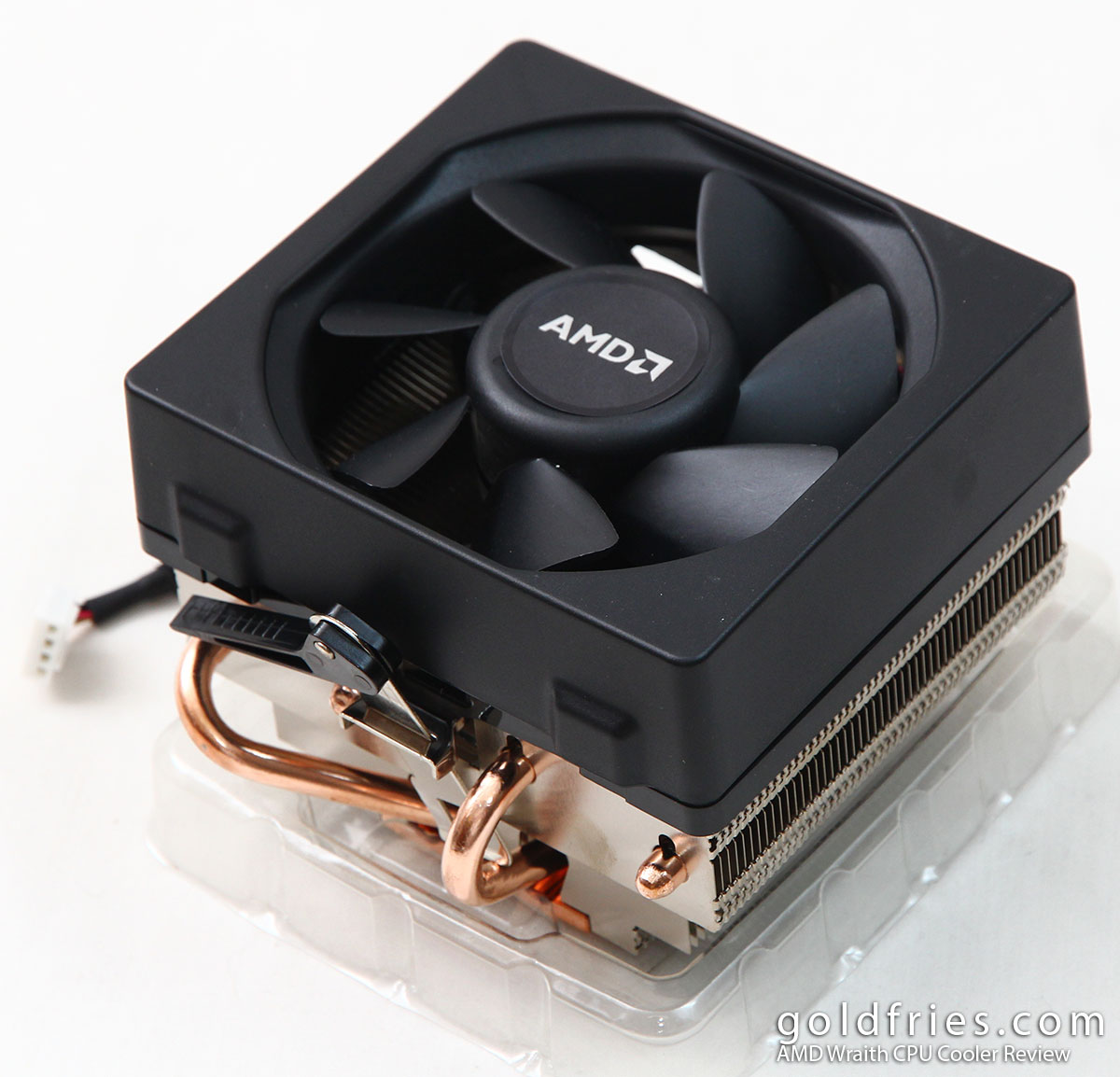 The first thing you’ll note is the size, this is how the Wraith compares to other stock cooler, the smallest one being the one that’s bundled with an AMD Athlon X4 840. Here’s the view from the side, the Wraith cooler seems gigantic in comparison.

The Wraith cooler comes with copper heatpipes and copper base, and it uses the clip-on system just as with other AMD stock cooler. The fan is enclosed by a shroud that measures 95mm by 103mm, an awkward dimension and it doesn’t seems like it’s easy to replace either should the fan ever break down. 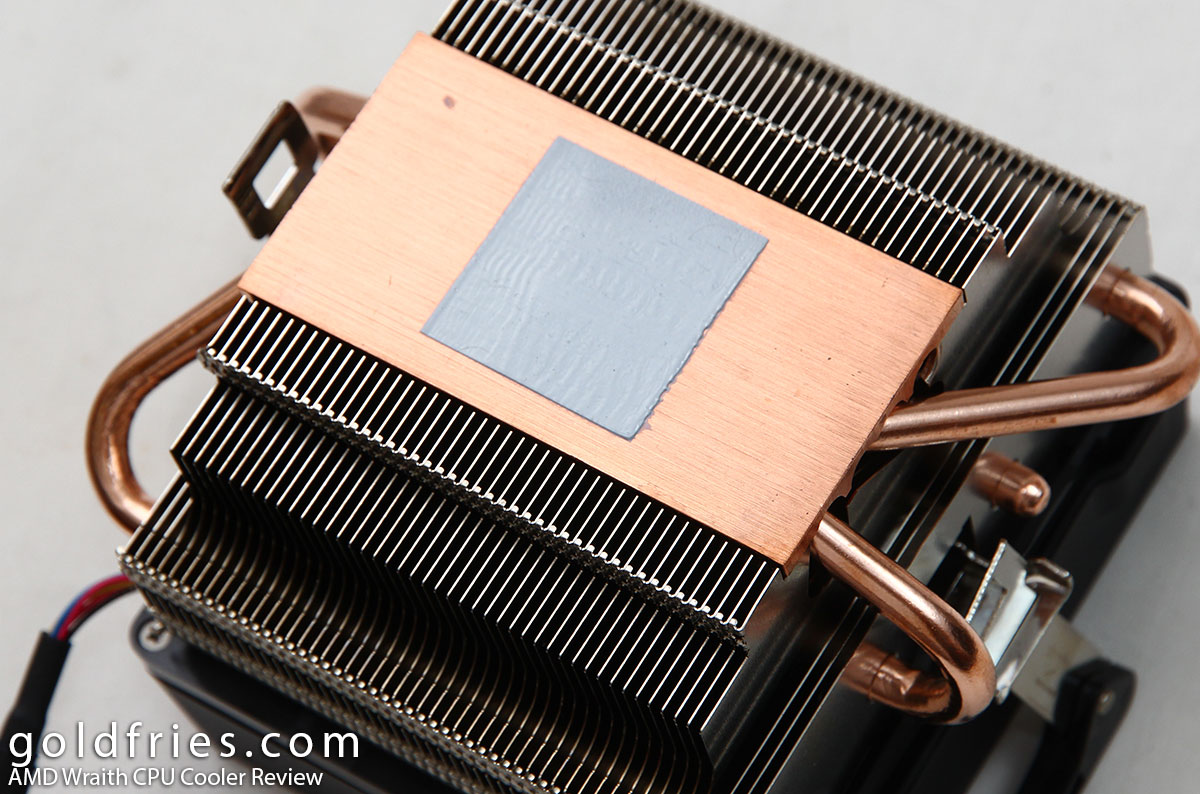 The AMD Wraith CPU cooler is said to be able to deliver around 56 CFM of airflow and has low noise-level of 39dBA, that’s about the sound of the fridge.

Personally I think this is a very good way to assess how well the Wraith CPU cooler performs and I must say it doesn’t disappoint.

Here are the results as I stressed the processor by using my X.264 10bit to 8bit conversion test. I compared the Wraith CPU Cooler to a Cooler Master Nepton 120XL that costs a little over RM 400, room temperature is at around 25Â°C. 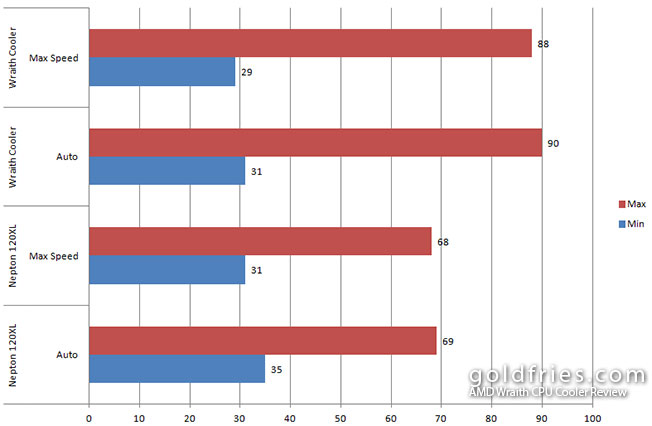 Amazingly the Wraith Cooler passed the test, the temperature on AUTO setting is slightly warmer than when set to run at maximum speed, that’s because at AUTO the fan runs at variable speed thus lose out a little during the initial stage of heat build-up and by the time it reaches full speed the heat build up is quite significant already.

Do note that this test is done in an air-conditioned room, in warmer environment the FX-9590 might just be too tough for the Wraith CPU Cooler to handle.

As for the noise-level, the Wraith Cooler isn’t dead silent but it is silent enough. If I were to rate it between 1 for absolute silence and 10 for ear deafening, I’ll rate it around 3 – 4 and that’s how silent it is.

The AMD Wraith CPU Cooler is by far the best ever stock cooler I’ve ever come across – too bad it took AMD so many years to figure this out, it’s a shame that FX processors are ancient by today’s standard. Another thing is the fan, being a non-standard fan size means it’s difficult to find a replacement should it fail some day. One a positive note, this also means future AMD processing units are likely to be bundled with the Wraith Cooler.

The AMD Wraith CPU Cooler is bundled with the FX-8370 processor, retailing at RM 880. The non-Wraith package retails at RM 830. Now if you consider the price difference and cooling capacity of the Wraith CPU cooler, that additional RM 50 is well worth the premium.