Now things get more interesting from this part, the side panel comes with a window. The website claims that the GT-RS has a large acrylic right side window for clear viewing – that’s laughable. Firstly it isn’t large, and secondly the acrylic window is dark and lastly between the acrylic panel and the components lies this large-opening hexagonal metal mesh. Take a look at the other panel on the first page, that’s how it is. 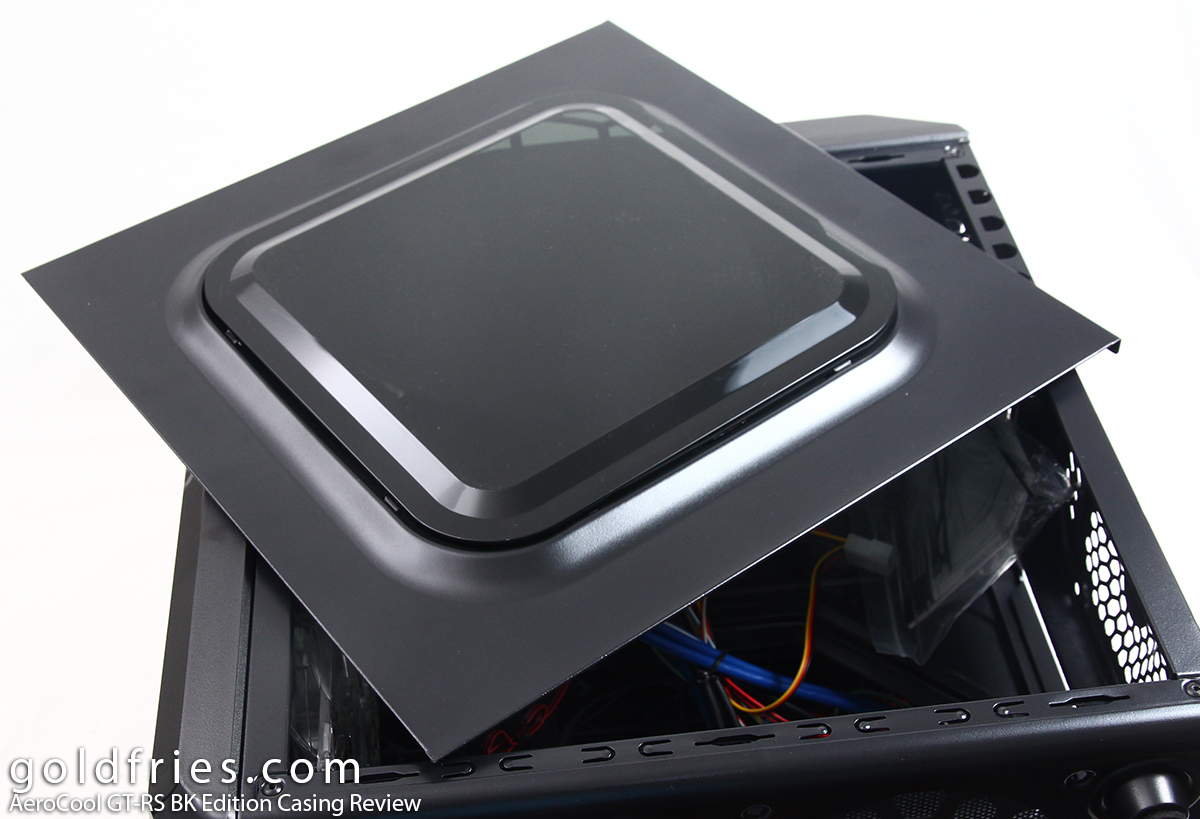 Here’s the view of the second chamber where you house the computer’s main components.

It is correct but with conditions. 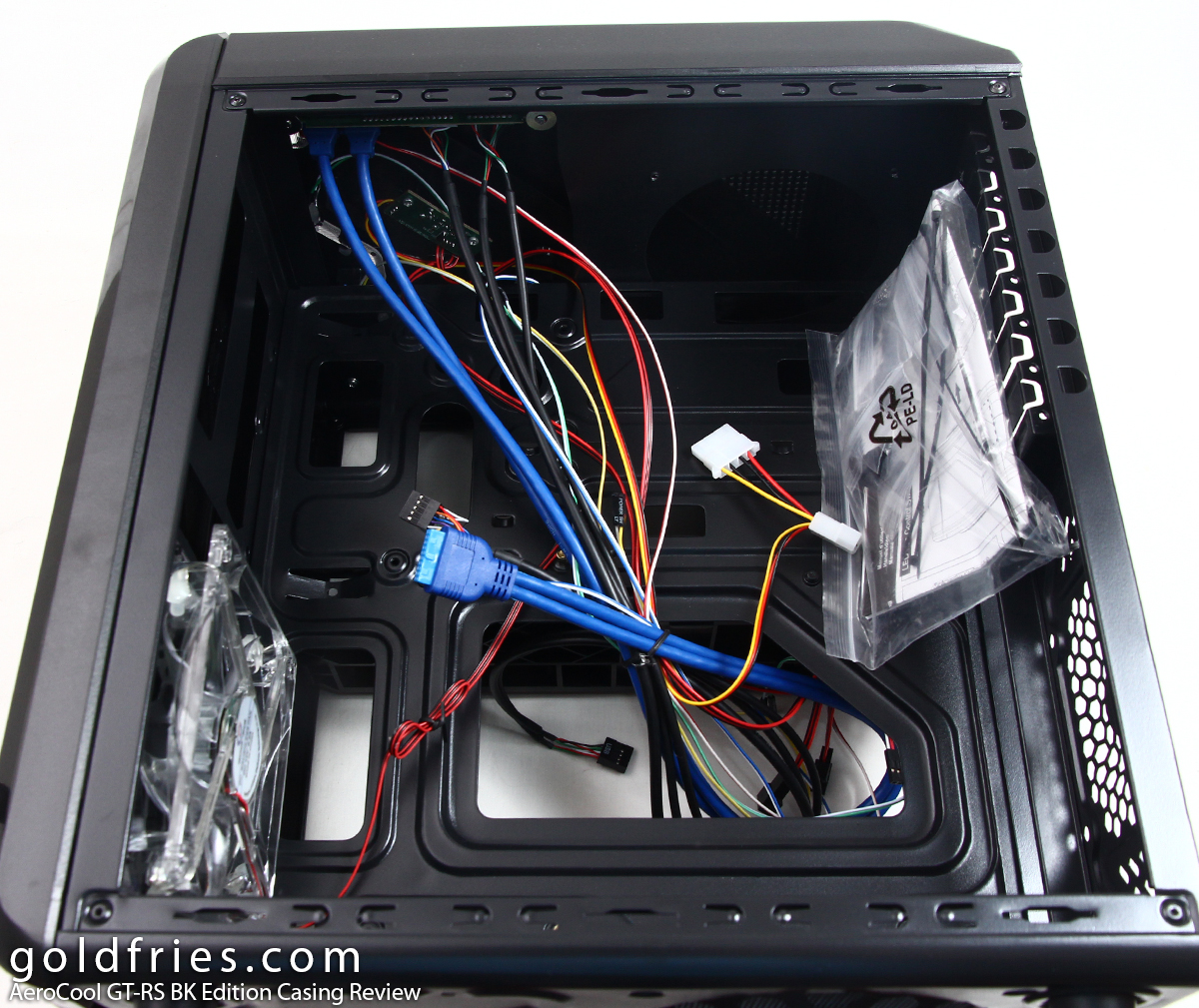 Let’s start with the radiator part – you WILL NOT be able to any radiator once you have a large sized ATX board, like the ASRock Z97 Extreme4 that I used for this setup. Regardless whether it’s 240mm or 120mm radiator, it just won’t fit because there won’t be enough clearance SATA connectors or even ATX PSU connector.

In order for radiators to work you’ll need to use smaller boards, like say a Gigabyte Z97X Gaming-3, or boards of smaller form factor like MATX or Mini-ITX. 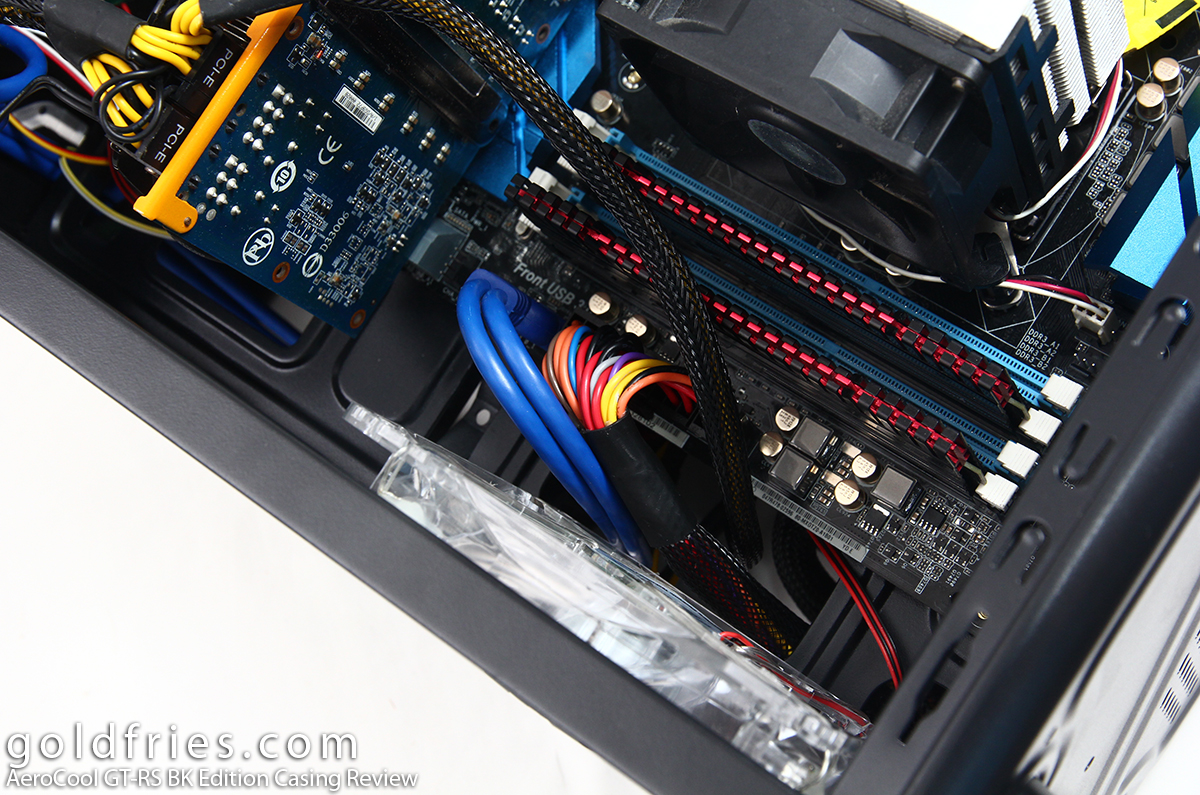 If you look at the image above, you’ll see my Gigabyte Radeon R9 280X Windforce (with goldfries custom paint mod!) stretches almost to the front, so yes the casing supports long graphic cards BUT you have to choose between a lot graphic card or a radiator unit. You can’t have both.

Speaking of radiator, the casing has the worst ever radiator mount I’ve ever come across. Just look at the image below, it amount of metal panels criss-crossing the diameter of the opening looks ridiculous. 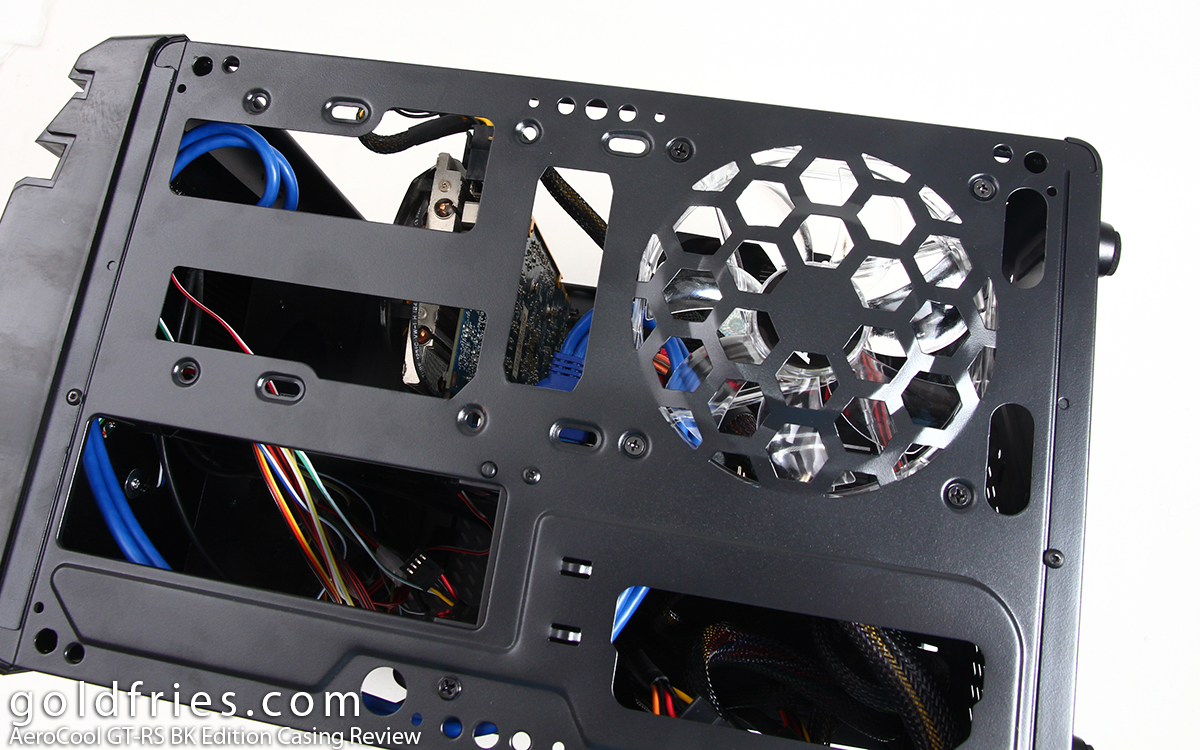 I did thought of mounting an AIO unit with the fan placed on the other area but the grill protrudes thus installation is impossible. What about the other 120mm area? Not possible either, the clearance between the frame and the front cover is too little to accommodate a standard profile fan. 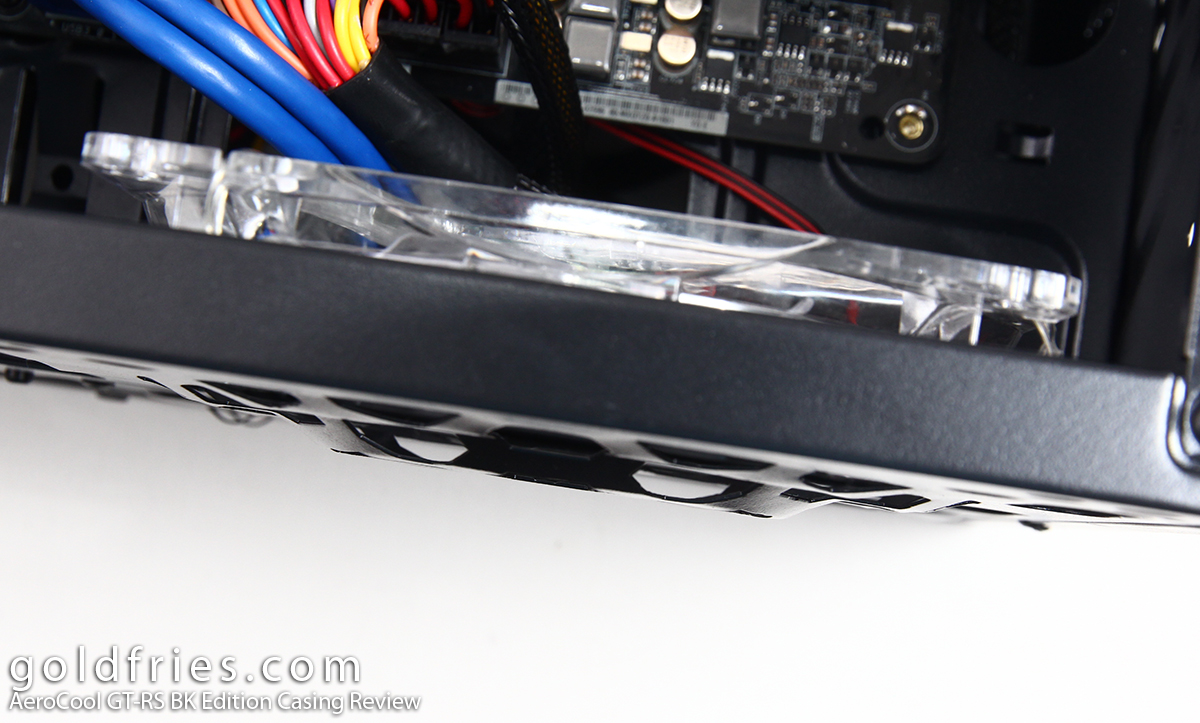 By that time I was a little frustrated, considering I have all the parts I intended to use but I can’t install one without changing the other to something else. So fine, I scrapped the idea of using AIO and decided to use air cooling instead but here comes another WTH moment – the clearance. There’s no way to accommodate high-end air coolers, and I’ve not seen any high-end air coolers that are under 121mm other than those that are wide like Prolimatech Samuel 17. 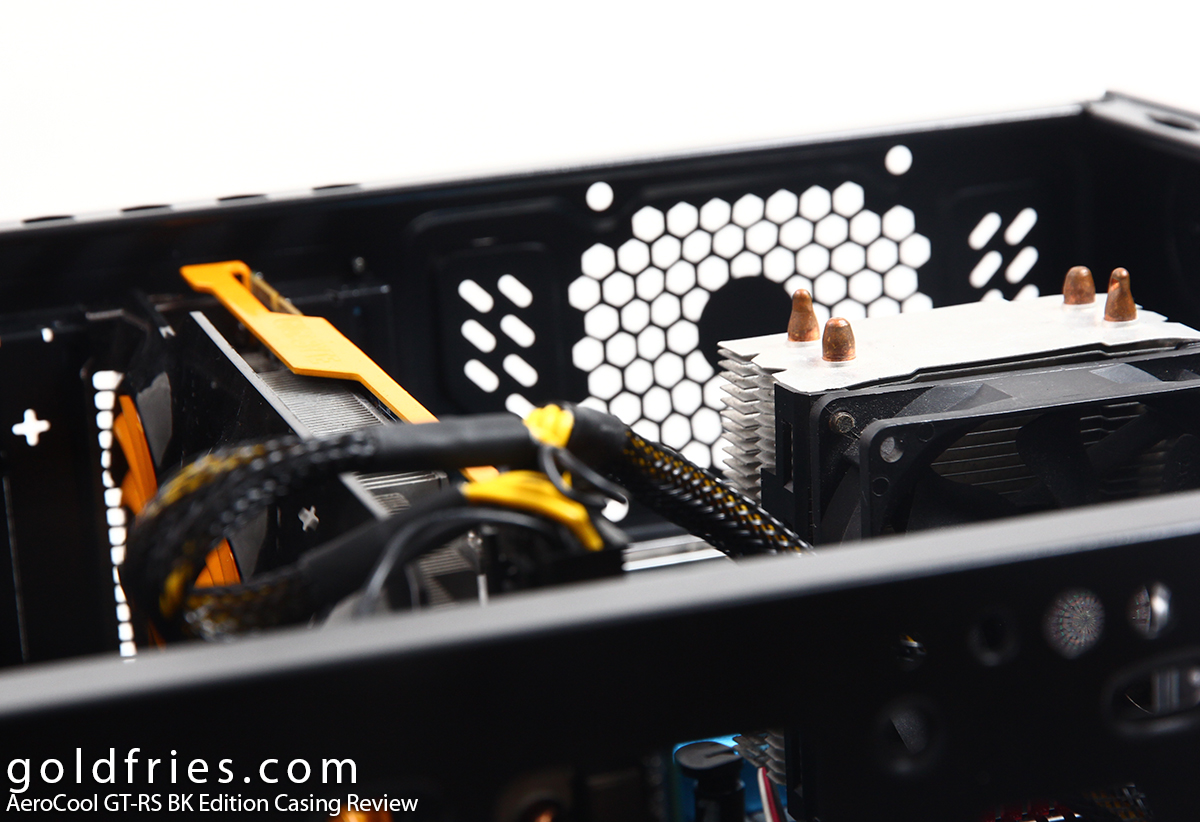 The final straw that broke my back was the design that made it almost impossible to secure any PCI-E component. Just look at how ridiculous is the design, sure they have large holes up at the frame for the screwdriver to reach the screws but what’s the point in doing so when the holes aren’t aligned properly? Thumbscrew? NOPE. How about using the provided screws to hold the PCI-E components? Sure but the screw driver couldn’t even twist the screw properly and the clearance between the GPU and the structure is extremely low.

I was pushed to the point of nearly abandoning the review. In the end I had to resort to one of my really small sized screwdrivers and carefully get the screw in place. By then I was already extremely disappointed with the product. What did I do? I just took a final photo of the setup. I couldn’t be bothered going any much further with such a horrible casing, the cables that stem from the top of the casing for PWR / RST / HDD / LED and whatever, they’re pulled to the other chamber but that also require quite some effort as the gap at the upper area isn’t generous.

The AeroCool GT-RS BK Edition Casing retails at around 70 USD – it is a casing that hold great potential for modding purpose but overall I think it’s a horrible product.

The joke here is that I had greater flexibility on Mini-ITX casings like the Fractal Design Node 304 and ThermalTake Core V1.

The GT-RS is a huge disappointment, AeroCool had great casings like the DS 200 and DS Cube that I adore so much, then there’s the Strike-X Cube that’s pretty neat but the GT-RS is on the opposite side of the spectrum. 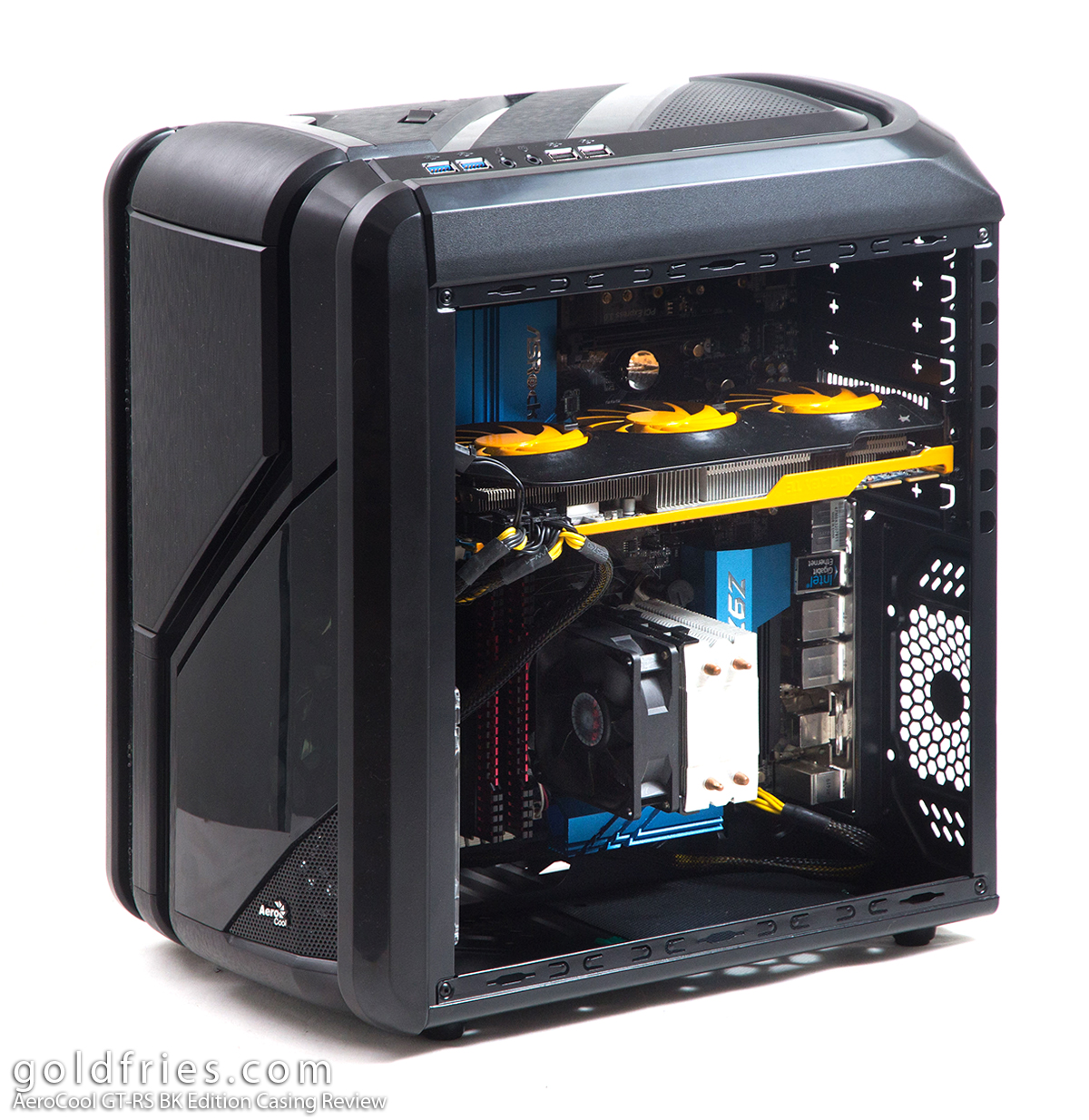