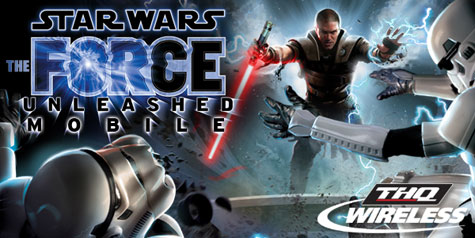 I’m sure many of you would’ve heard of this game being released across the many platforms such as Xbox360, Playstation 2, Playstation 3, Wii, PSP, NDS as seen on the official site but how does it fare on the N-Gage?

This article was made possible by Nokia

Star Wars: The Force Unleashed (SW:TFU, I know it sounds funny!) takes place between Star Wars Episode III and Episode IV. In this game, you play the role of Darth Vader’s secret apprentice.

I suppose the story is same to that of the consoles, just that the game is played in a different way.

One word – SIMPLISTIC. While the game relies on the game buttons, I only used the controller keys and Gaming Key B. While the controls look simple, the game itself is complex in it’s own way. I could’ve used the keypad but I think the buttons are too far apart for a game that requires reflex. 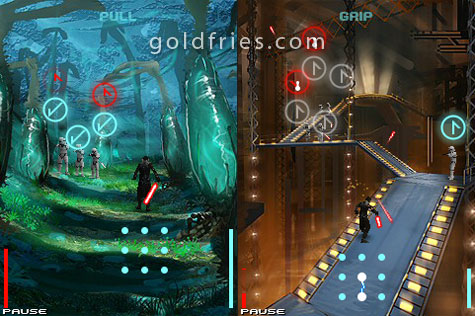 In my opinion, Star Wars: The Force Unleashed Mobile is a puzzle game, even though the in-game info labelled it as action-adventure. I couldn’t bring myself to call it an action-adventure game, simply because there’s nothing to adventure to begin with. The action? You don’t control much, all you have to do is to press the keys accordingly based on the indicators that appear on screen.

SW:TFU uses the unique Cellweaver control method, and unique it is. When I first started the game, I really found it interesting. It’s amazing to know the amount of things you can do with the combo available. The controller keys are used to decide what kind of force you wish to unleash (Eg, heal, shield, grip, push, pull, lightning……… ) while holding the Gaming Key B allows you to execute defensive moves with your light saber, blocking all incoming beams or breaking from opponent force.

Unfortunately as I venture deeper into the game, I realize that it doesn’t exactly control your player. Sure, you could use it to wield the FORCE and deflect beams but that’s about it.

There’s literally no way for you to control the character on where to run, it’s just a fixed path. All you need to do is to use the Cellweaver to weave the right force at the right time on the right objects and you’ve completed a scene and the character moves on its own. See why I call it a puzzle game instead of an adventure game?

The game requires rather quick thinking and even quicker fingers. Within a split second you need to figure out what should be the force to use and press they key combo as quick as you can. The part I hate the most is when it comes to deflecting attacks, quite often the indicators appear rather far apart.

To defend, just press the controller key that corresponds to the highlighted sector of a circle, easy – right? It’s not as easy as you think, simply because when the defence sector is on the right, it also looks like an arrow pointing left! That’s where the confusion kicks in! 😛

I finished the game in less than 3 hours, YES! 3 HOURS! And that wasn’t even on EASY mode! I was playing on NORMAL mode, just as I always do with any other game. I must say that some scenes were really tough but eventually I manage to sail through it in no time. With my nearly 3 decades of gaming experience, I conclude that the game in NORMAL mode might be a little tough for your average gamer.

Based on the SW:TFU journal (yes, they track your stats) – my total game time so far is only 3 hours and 41 minutes. Within that 3 hours and 41 minutes, I had finished the game once in NORMAL mode, once in EASY mode, and I’ve played each of the 6 available challenges at least once. I’m not sure if the cut-scenes are accounted for in the game time.

So if you’re similarly skilled as I am, that’s about 3 hours game time for you. If you’re not as skilled as I am, your gaming time could possible stretch to 6 hours on normal mode, assuming you have the perseverance to attempt the difficult scenes again and again. 🙁

Was I disappointed? Yes, the game was really FUN but it was damn short. The story was only 6 chapters long and the ending was anti-climatic.

Speaking of chapters, each chapter comes with a boss at the end. Upon finishing a chapters, you unlock a SURVIVAL challenge. And the survival challenge wasn’t exactly fun to begin with, unless you find challenging your own record by controlling an immobile character who only deflects and unleashing force is fun. 🙁 Not once in the entire game did I get to control light-saber movement either, arrgghh!

The game practically lacks replay value. I haven’t brought myself to play the story again in HARD mode, I can’t bear the thought of going through the same thing again for the 3rd time, only with tougher odds of finishing the game.

Graphically the game was stunning! Awesome background in rich colors and glorious detail, it’s certainly eye-candy! The character sprites were 3D of course, the character movements were fine and light-saber fights look great (for a handheld device of this size) but remember, you don’t get to wield the sabers. 😀

The soundtrack was marvelous I must say, it really sets the Star Wars feel to the game. Sound effects like that of the saber, beams and everything else were Star Wars-esque as well – the only repeated and annoying was the AAAAHHHH of the storm troopers when you throw them off the ledge with the force. Based on the journal, I’ve killed 847 enemies so far, imagine the number of AAAAHHHHs I heard. They’re all the same!

N/A – You can submit your SURVIVAL challenge scores to N-Gage arena.

I sense the FORCE is weak in this game. 🙁

The Cellweaver concept is interesting, and sure is the game. However as I mentioned earlier, the game it too short and the lack of replay value just made it worse. The only reason for me to recommend this game is for the experience, to know how Cellweaver is and also to enjoy the breathtaking graphics and sound – to FEEL THE FORCE.

Maybe I just finish games too fast. I had friends commenting that I shouldn’t waste money buying games because I finish them too quickly, I have a track record of finishing games within 3 days or less, with a total of less than 12 hours game time. 😀