Those of you who grew up using Nokia’s 3310 handphone would probably remember Space Impact just as well as Snake.

Image taken from this site.

This article was made possible by Nokia

Choose your hero and lead the war to save mankind. Fight across 10 sprawling, action packed levels and battle more than 40 different enemies through a variety of challenging environments. Upgrade your Skyblade with weapons, engines and generators for an arsenal of over 400 different combinations. Maximize your ships weapons as you dodge enemy fire, then log onto the World Battle Server and compete against others globally to control the most territory.

Source or you could also visit the official game site

So basically you’re up against an invading enemy called MEKS. You have 3 hero to choose from, while the missions are the same, the conversation varies and each step unveils the story from the hero’s perspective.

It’s a good old scrolling shoot’em up, oh how I miss such games. I can remember those days playing DIF2, Dawn Raider, Raiden and Raptor, awesome shoot’em up that kids and teens this generation never heard of. 🙂 Playing Space Impact: Kappa Base (SIKB) was like travelling back in time, only this time I was playing it almost every where I go on my multimedia computer (most people still thinks it’s a phone!) 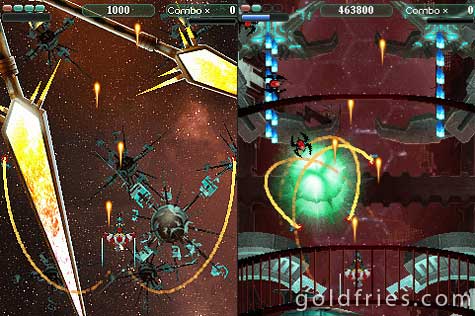 The game is simple, all you have to do is to a few selection and enter into the fray of mindless side-scrolling shoot’em up combat. Unlike the original Space Impact where you only get 1 ship, 1 gun and a few choice of special weapons, SIKB offers you 8 Skyblades and host of weapon combo to choose from. Each Skyblade vary in stats. Shield indicate how many hits you could take before going BOOM! Speed for faster movement from Point A to Point B and Kinetic, for better energy collection which I’ll be elaborating shortly.

Each Skyblade also has a slot for special weapon and at least 2 slots for your standard weaponry. One of the Skyblade actually offers you 3 weapon slots but you’re only left with very minimal Shield. Talk about fully customizable weaponry

The weapons come in many flavors, beam weapons that hit straight and hard, missiles that home in on any target on screen, spread cannons that only hit things around the side – I could go on but eventually you’ll find out the combo that suits you best. 🙂 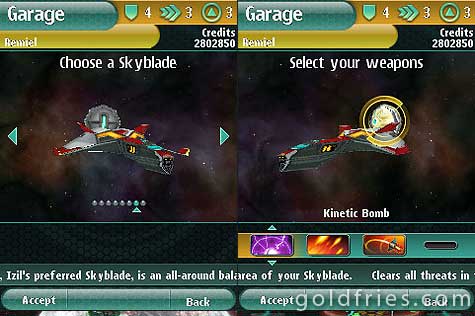 Interesting, right? When I first played SIKB, I was doing my best to avoid all enemy fire – it’s something any other gamer would do instinctively. After a while, I noticed that quite often my Skyblade didn’t burst when it came into contact with enemy fire. 😳 I saw the instruction but I didn’t quite get how to get it done until after a while, nevertheless it’s something new. Some ships collect kinetic energy better than others, those with better kinetic energy collection will have the bar charged up faster. There are 3 levels of charges, the higher the charge goes the more powerful it is when used.

Speaking of power, you also get to collect health modules to restore shield and power-up modules to increase your weapon’s fire-power. You get a maximum of +2 power up.

Besides being able to customize weaponry, one of the Skyblade offers you full customization – not just for the shield, speed and kinetic energy collection but also the color, hull, wings and thrusters.

Sounds good, right? Now time to burst the bubble – you don’t have the full range of Skyblade and weapons to choose from at the start! The game requires you to earn some credits before being able to unlock these additional items. So yeah, repeat Mission 1 for a few times and you’ll probably unlock a portion of the available items. 😛

Once you’re done with being picky over your action gears, it’s time for some action. The action in SIKB is fast and furious. I’ve played the game in both normal and hard mode, and hard mode can be REALLY HARD but with some skill and the right gear, getting through the game wasn’t that difficult, you just need to be a little more careful as Hard mode gives you only 1 continue credit instead of 4 while pitting you against stronger enemy.

Yes, you read that right – going in with the wrong gear could make it really to survive in a mission, let alone completing it. Some missions might take you a try or 2 to figure out which weapon load out is best for you. 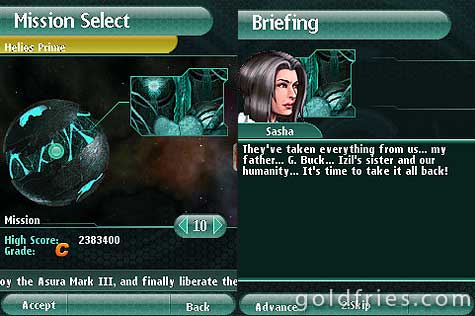 During the course of the game, there will be some chatter between the hero and other characters involved in the game as the plot thickens. Anime style drawing with text after text of conversation, I have to admit that I skipped most part of it. I did read them here and there, they looked kinda cheesy to me. 😛 I couldn’t be bothered with the story though, it’s the action I want!

And as with all shoot’em up, you’re final target in each mission is always the level boss. I must say that the level bosses for SIKB are very well thought out, some of them seem to throw tonnes of Christmas lights at you with nearly inescapable pattern of destruction.

SIKB’s developers were kind enough to include a health meter for the level boss. 🙂 It’s good to know that you’re doing it right! 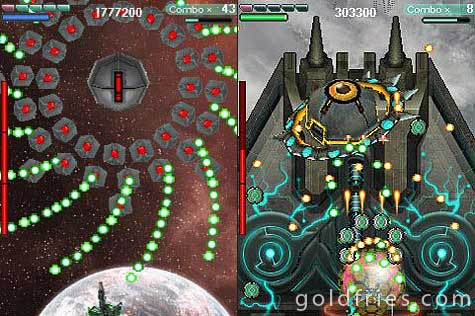 Upon completing each mission, you’re presented with your report card on how you fare. I got results like C! WTH!?!?! How could I get a C!??!! 😯 Well anyway, after playing the missions again and again and testing out most of the weapon, I finally got results like S+ for almost all the mission. S+ is 2 levels above A with S being a level above A. The grades the main factor that made me come back again and again, always hoping to beat my own record.

And don’t worry about having to spam the FIRE button like how we use to in arcades or earlier Nokia phones. The game only has 2 options for you when it comes to firing your weapon – Auto-fire ON, and Auto-fire OFF. This means either the system fires it for you, or no firing at all.

The game excels in the graphics department. From what I observe, most of the objects are in 3D and that includes the Skyblade and the level bosses. The background graphics are done in 2D, rendering many form of landscape including rainforests, snow-covered terrain and even alien space stations. Parallax scrolling was used to add to the effect.

Sound wise, it’s just a bunch of bing and bang of weaponry and explosion with a touch of music to add to the intensity of the gaming experience. Seriously, the frantic pace of action leaves you little time to take note of the sound and graphic detail.

There’s no multiplayer mode for this game, however you do have World Battle where you pit your scores against players around the world. World Battle mode comes with some pre-set missions where all you need to choose the type of challenge type (Kill Count, Score Attack, Max Combo or Boss Attack), choose the challenge, customize your Skyblade and you’re ready to go.

The only catch is that you have no continues. Each challenge type comes with 3 challenges – Easy, Medium and Hard.

I guess you would know the conclusion by now – I really like this game. And what I didn’t like about it? The level bosses, I found out that if you could just survive long enough, the level boss would self-destruct. Don’t believe me? Haha, if only I have a video camera with me.

I also wish there were more Skyblade options. As for the weaponry combo, I pretty much figured out some really good combo that help me rake in like 260 million points in a single mission.