Yes, it’s a very DIRECT and BLUNT way of putting the article. A sorry excuse for “I can’t think of a better title.” but I think it gets the message through.

I for one, cannot comprehend the designers of 2011 that still implement FLASH for many websites. I think it’s fine if it’s a small and insignificant part of the website but I’ve seen some that are using it as the main page slide show and some even use it as an INTRO page with no SKIP button, or some are even more “clever” that they actually put the SKIP button as part of the Flash animation! WTHZOMGBBQSAUCE!!!

I Like Using Flash, Why You Say I Cannot Use

Why? Blame APPLE! 😛 But seriously, the Apple iPhone, iPod and iPad are great devices. I only have the iPad and I think it’s awesome!

That said, I’m not the only one who thinks it’s a great device.

An Apple Can Keep Flash Sites Away

Let’s refer to the this articleApple iPhone & iPad stats round up, dated June 2010.

There were 11.6m unique Android OS devices and 27.4m iPhones worldwide in the AdMob network in April 2010. When you add the iPod touch and iPad to the figures, the number of iPhone OS devices jumps to 40.8m worldwide.

Note : That article was dated JUNE 2010! That was before the launch of iPhone 4 and the recent iPad2. In fact the article was published many months before iPad reach countries like Malaysia.

By now (a year after that article) the number of iPad and iPhone users would have ballooned. I can’t find a recent figure but I think judging by the trend – you don’t need a rocket scientist to know it’s going to be along this path for a long time.

Numbers aside, when people use Flash content for the bulk of their website – they’re basically losing out on users who are using the devices that DO NOT SUPPORT Flash – specifically, the Apple iPad, iPod and iPhone users who are often the TRENDY and UPDATED people, and more importantly they’re people who are willing to SPEND! Imagine how many viewers you’re losing out, each viewer you lose is a spender lost.

It’s like “Oh what’s this page….. crap, doesn’t load. Screw it.” …… after that the person just forget about your site. If you can’t bother to remember these users, I don’t see why they should remember your site.

*Note : The examples above for educational purpose only. They are actual sites and have Flash content, above are actual screenshots taken with the iPad. There’s nothing defamatory about it. Anyone with iPad loading those site would see the same.

Other Devices May Not Load Too

Bear in mind, some people are using old computers and not knowing how to upgrade their Flash player. Others like myself, have a Nokia N900 that Adobe doesn’t provide upgrade to the Flash player on it. So there, you lose even more viewers.

Not everyone is on super high speed Internet connection like say in Korea. If you’re targetting Koreans, ok then go ahead. Many people are still on sub 1Mbps connection.

If your flash animation is big (usually it is) then it’s going to take time to load. Most people would just SKIP the introduction anyway, since it’s just a bunch of slides – they’re also the people who just want to get to the substance and couldn’t be bothered.

For me, I’m one of those who usually just skips unless I’m somewhat interested in what you have in store.

Yup, experienced it before? Wanted to copy a text from a Flash based site but can’t do anything because it’s all part of the Flash. Some developers are more thoughtful and made the text into one that you can select and copy but it’s rare.

Yup, experienced it before? Wanted to share to a friend the Flash based site but can’t do anything because it’s all Flash, there’s no other URL. You just have to tell the poor soul to visit the site and HOPE (and PRAY if you must) that his or her device supports Flash content and the connection used is fast enough to not cause the user to close the page before it finishes loading.

After that, you’ll still have to hope the fella is clever enough to locate the page you’re referring to. WTH!?!? So much hassle?

Flash introduction often adds to the design cost. If you’re making an entire site in Flash – it costs a lot more and you also need a lot of luck to not annoy your users. 😛

Flash is obscenely tedious in maintenance. To update a text or anything on the .SWF (that’s the Flash file extension) content, you would have to recompile the whole SWF file and upload it to the site. And guess what – most people who view your site probably would just skip your latest update anyway if the Flash was the intro. If the Flash was an entire site then good luck on trying to NOT annoy your users.

If the source file is lost due to whatever reasons – good luck to you as well, now you need to make a totally new site since there’s no source file to edit and recompile the data. This points back to the earlier point – COST.

Flash is not SEO friendly. Regardless of how Google tells you it can index the content in Flash, fact remains is that Google still chooses HTML over Flash content. You guys use Google a lot – how often do you see Flash content website ranking in the first page? Or even the following pages?

In fact how many Flash developers actually know about generating the text for Google bots to index? 🙂 See the problem?

Visitor tracking tools like Google Analytics wouldn’t work with Flash, especially for sites made entirely out of Flash. All you see are visitors entering the page that holds your content. You’ll have super high bounce rate and no way to track which page the users frequent.

Flash websites are usually the result of site owner’s insistence or the developer’s (or designer’s) lack of guidance (no proper consultation) to the site owner.

Regardless of what lead to the Flash website – it just leaves a negative impact, it makes users think that the site owners are outdated and couldn’t care about users.

So yeah, basically you spend more, need more effort in maintenance, you get a site that’s not user friendly nor search engine friendly…….. and you make people think you don’t care! 😛 Seems pretty bad eh?

Flash intro websites aren’t that bad if a skip button comes along with it provided. At least the general public is still able to view your main content.

It’s only a huge problem when the Intro page doesn’t come with skip button, or skip button within the Flash content, or when the site is entirely in Flash. 🙂

In my opinion – the Flash days are pretty numbered, Developers are already in the direction of HTML 5 / CSS 3 / AJAX. Websites done with HTML / CSS loads faster, works on all platforms, easier to maintain and overall costs less to develop and maintain.

If you insist on “FEELING GOOD” looking at your own website by ignoring the rest with devices or connection that have problem loading it, you’ll have to live with the consequences of your call.

Love this article? Please RT or share. Thank you! 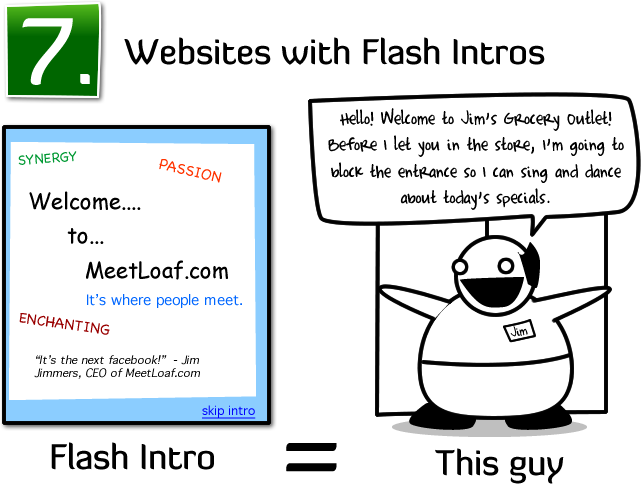