This power supply from Gigabyte has been rather popular lately, especially in forums like lowyat.net where build specifications are often discussed. Of course for a sub RM 100 power supply like the Gigabyte PoweRock 390w, it’s often only mentioned in tight-budget builds.

I got my unit at an awesomely low price of RM 79 from ALL IT – it was the last unit on the shelf the day I bought it. I thought of getting a cheap power supply for my HTPC setup (yes, it’s finally coming!)

This is a VERY SIMPLE power supply. Look at it! 3 SATA connectors on one cable. 2x 4pin Molen + 1x FDD connector on another. The other 2 cables are the ATX power connector and the ATX CPU 12v (4 pin). 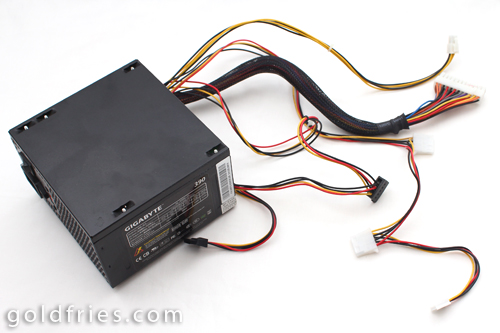 There’s no PCI-E connector, and it doesn’t come bundled with any converter either. The overall unit can be described in 2 words. SIMPLE and LIGHT. 3 words if we count CHEAP.

It does come with a 12cm fan, which is something I like on PSU and I thought it’s rather odd to have the fan placed slightly off-center. 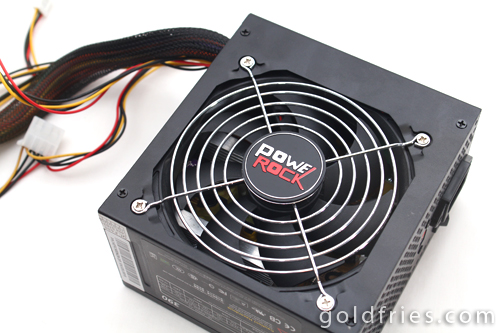 Here’s the back view, nothing unusual. 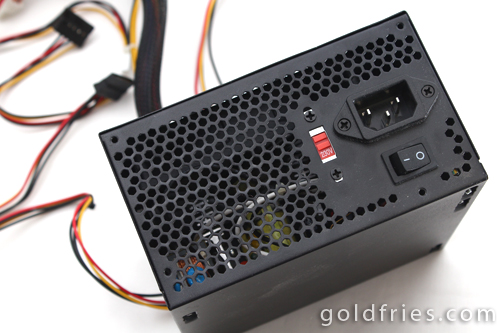 The Gigabyte PoweRock 390w is a dual-rail PSU, I have no idea how the connectors are split among the rails but here are the readings. 12A on the 12V rails. 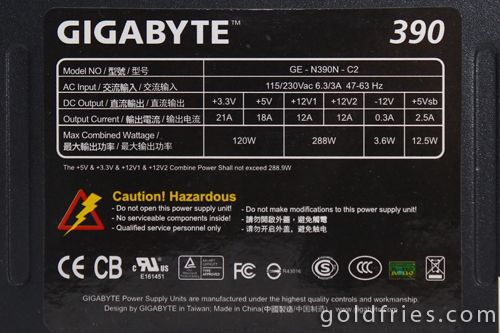 I’ve been using this PSU for about a month, powering a GTX 460 on the AMD E-350 setup. I used it for playing games like COD:MW2, and while I’m not gaming, the rig does [email protected]. Since I’ve not be gaming much on my PC for the past months (hence the lack of articles over the past week), the rig is on [email protected] 24/7.

The GTX 460 is a 160w graphic card, considering mine is an overclocked version, plus a bunch of 120mm fan and hard disk, I recon the power consumption comes to about 200w.

I’m going with the assumption that the 288w is the ACTUAL limit, then my 24/7 200w power consumption means the PSU had undergone weeks of 70% load, which is a lot more than what the average person’s total power consumption. Looks like the power supply isn’t that bad after all, at least hasn’t made its way to my “PSU I Killed” list. 🙂

Here’s the thing to note – this power supply is only available in Malaysia! I have no idea why. Refer to this page

Would I recommend this Power Supply? YES. “78% efficiency output” but in no where it says this PSU is at 80Plus certified.

But here’s the thing – the fine print worries me as newbies or non-tech people would refer to the BIGGEST NUMBER written on the box. And on the PoweRock 390w’s box, there absolutely no details on the power distribution.

To put it simple, this PSU is only recommended for low power consumption computers. These computers usually have graphic cards and processor with total combined cost being less than RM 700, just an example of course.

If you’re not certain, you may use the PSU Calculator tool at goldfries.com fanpage to estimate. It’s slightly exaggerated to give you assurance. 😀 You could also visit lowyat.net’s Hardware Q&A section to get advice from other techies.