TUL Corporation, a leading and innovative manufacturer of AMD graphic cards since 1997, has released a whole new line of graphics cards that you have all been waiting for. All models are based on the latest GCN architecture to help deliver outstanding and extraordinary graphics performance and image quality. 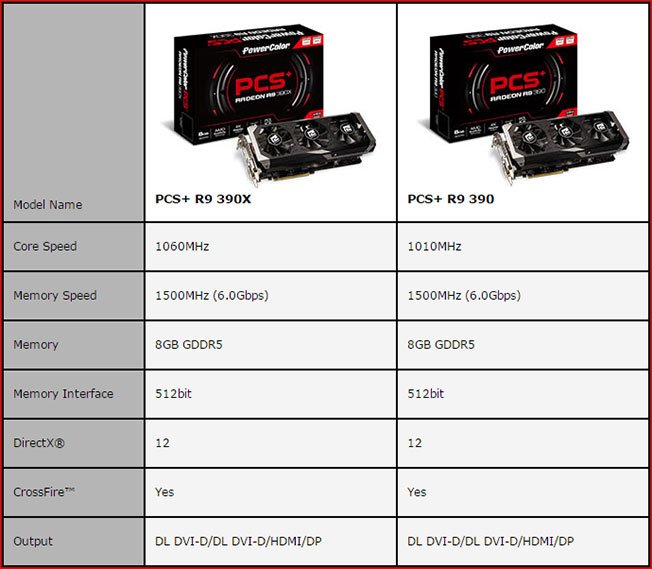 PCS+ R9 390X/390 both utilizes 8GB of GDDR5 memory, ships with core clock speed at 1060MHz and 2816 stream processors for the 390X, 1010MHz and 2560 stream processors on the 390, and 1500MHz memory clock speed which is connected via a new high speed 512-bit memory interface. For enhancing power efficiency and preventing losses, Digital PWM solution is provided to work at a higher frequency in order to support fine tuning adjustment and low ripple at an output voltage. Moreover, the total of 8 phase (6+1+1) board design is applied to the models for power efficiency, stability, and delivering ultimate performance at OC mode. PowlRstage increases the power up to 3-13%, features up to 1.0 MHz switching frequency, and supports efficient cooling ability. Also, the anodized back plate is attached to the back of the card to protect the components as well as helping to lower the temperature. The Efficient Trio Fan design with the Mute Fan Technology delivers intelligent fan controlling to provide noiseless environment as well as reducing the power consumption when the GPU temperature is lower than 60Â°C. For the best thermal solution, the card is equipped with pure copper GPU block to absorb heats from GPU. This block is connected to 3pcs of 6mm heat pipes and 1pc of 8mm heat pipe to help deliver heat to the nickel plated aluminum fins heat sink. These two models support AMDâ€™s newest technologies such as Virtual Super Resolution, FreeSyncâ„¢, Liquid VR, and 4K resolution. 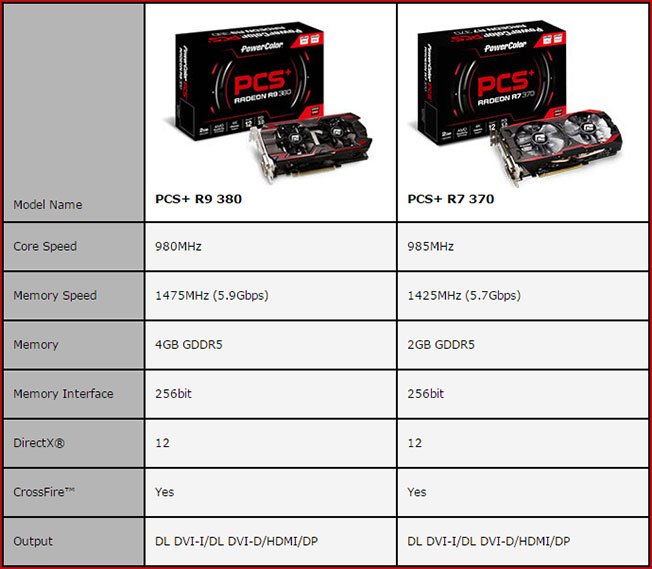 PCS+ R9 380 has 4GB of GDDR5 memory with 1792 stream processors. It is shipped with 980MHz core clock speed and 1475MHz memory clock speed that is connected via a speedy 256-bit memory interface. PCS+ R7 370 utilizes 2GB of GDDR5 memory with 1024 stream processors, and ships with 985MHz core clock speed and 1425MHz memory clock speed, also connected via a speed 256-bit memory interface. Both models adopt the features of Ferrite Conducting Power (FCP) for delivering extreme stable voltage power, multi-phases board design for enhancing the power efficiency and stability, and PowerPAK SO-8 for minimizing conducting losses and providing the excellent and stable voltage. The Mute Fan Technology and Double Blades Fan design (80mm on R9 380 and 90mm on R7 370) are used for both models. The heat sink on the R9 380 is made by the nickel plated aluminum fins covering the PCB to significantly increase the thermal efficiency and has 2pcs of 8mm heat pipes and 1 pc of 6mm heat pipe connected to the heat sink. On the other hand, R7 370â€™s thermal solution is different compared with R9 380. Two pieces of U-shape heat pipes are directly touching with the GPU surface, which is called â€œHeat pipe Direct Touch (HDT), in order to increase the heat transfer rate by 20% compared to ordinary cooling solutions. PCS+ R9 380 supports AMDâ€™s newest technologies such as Virtual Super Resolution, FreeSyncâ„¢, Liquid VR, and 4K resolution. However, PCS+ R7 370 adopts all of AMDâ€™s technology same as PCS+ R9 380 except FreeSyncâ„¢.