Global Sources Electronics is the world’s largest electronics sourcing show and Huntkey will display a variety of new products including the SCA607 USB charging station which was first introduced at the 2016 Consumer Electronics Show. The highly convenient SCA607 can charge six devices at the same time, while the brush rack keeps devices in order to prevent desks or workspaces from becoming cluttered. In addition to the SCA607, Huntkey will also bring its new power strips with different standards for different regions. The new SMD series are American standard power strips, including SMD507, SMD807, SMD127 and SMD407. There are two versions of SMD507, SMD807 and SMD127, users can choose the power strips with two USB charging ports or with double network interfaces as need. The SMD407 is a smart wall changer with two outlets and two USB charging ports.

The SZN607 is the latest in the SZN sereies universal power strips, it is equipped with five sockets and two USB ports, a maximum of seven devices can be in use at the same time. However, it’s worth mentioning that the SZN607 is equipped with child protective shutters in each sockets, the shutters can be opened only when both the Live Wire hole and the Null Wire hole are inserted simultaneously. That is to say, when somebody accidentally inserts a finger into a pin hole, the socket will bot be energized, therefore protecting users, especially children, from the danger of electric shock. 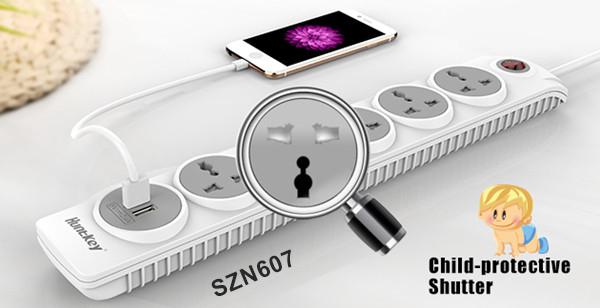