You might have friends that gloat away at owning Class 10 SDHC Cards and how fast they are but really, are they THAT fast?

Did you know that while these SDHC Cards are not equal even though they are all rated Class 10? 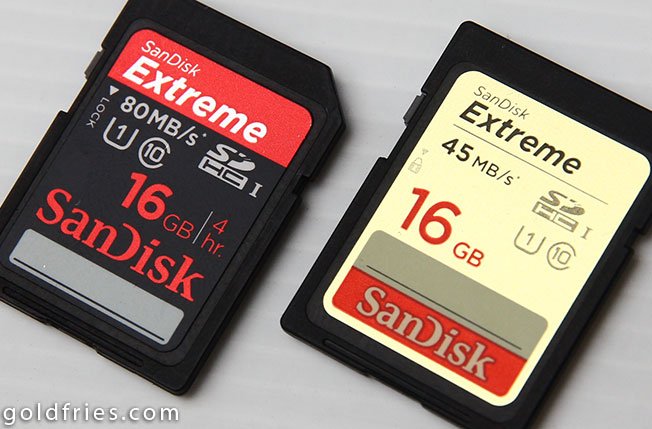 I’ve been using SDHC Cards for a good 5 years now and having a collection of them, I decided to conduct a simple test.

Before that, what is Class 10?

Do see those symbols in the red rectangle? They’re indicators of the card’s speed.

Class 10 means it is able to maintain a steady 10 megabytes per second writing speed. Writing speed is crucial when it come to photography and videography.

Faster write ability means the faster the camera is able to clear the photos from the buffer. What? Lost? Alright, let’s put it simple. When you take a photo, your camera stores it in its memory before it’s transferred to your storage.

A camera has limited memory and the more photos you take in a short period of time like in burst mode, you’ll fill up the memory space really fast especially when you’re using a high-megapixel camera and photographing it in RAW instead of JPG, or worse, RAW + JPG.

This applies to videography as well because it works the same, the details captured for video pass through the memory first before reaching the storage. If the memory is filled up, the recording stops.

You can read more about CLASS on SD Association, there’s also a good explanation by SANDISK.

Benchmarks – Similar but not the same

All cards are able to perform 10MB/second write speed as they’re rated Class 10, except the Class 4 card of course.

For the first test I used my Nikon D750 as it has a function that allows me to limit the number of burst shots, I set the limit to 10. For the image, it’s set to ISO 51200, F/4 and 1/250. Timer starts on my first shutter and stops once the memory is cleared, of which the camera will indicate when the buffer space is free. Tests were conducted multiple times, with best result taken.

As for the second test, I did a large file transfer from Windows 8.1 desktop to the SD Card. Windows 8.1 was the choice operating system as it shows transfer speed in both figures and graph. I took the round-downed figure for the results.

Below are the results.

Information : Rated speed is based on the Read Speed.

What can we learn from the above?

1. Class 10 rated cards are the same in the sense that all of them can achieve the speed specified for the class BUT they’re not the same in maximum speed.

2. The speed rated on the card is always the maximum achievable Read Speed. Write speed varies, for example the Sandisk Extreme Plus is said to have write speed up to 60Mb/s and from the test above (for the 32GB) you can see that the figure is very close. The Sandisk Extreme (45Mb/s) version claims to have 45Mb/s write speed as well but the test results seems to be quite far from it.

3. Should you pay a premium for faster write-speeds? It depends on what you photograph.

4. When should you consider a card with fast write-speed? If you often photograph on high-quality settings in burst mode (eg events, weddings, sports) then a card with fast write speed will be very helpful. It’s also helpful for those that are recording in Full HD or higher resolution video settings. Fast write speed saves you a whole lot of time, and allows you to grab more pictures should the situation require you to. Would you prefer to have a card that takes 5 seconds to clear the memory buffer or one that takes 20 seconds?