With new cameras sporting higher megapixels and more contented available for mobile devices, memory cards have now advanced to a much greater capacity. With that, we now have cards like this Kingston microSDXC 64GB, something you might want to consider for your mobile device, or even your camera.

This review was made possible by Kingston

For more details of the card, you may refer to Kingston. 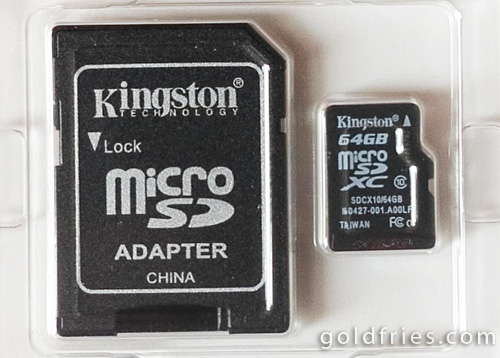 At the back of the packaging, you’ll see a notice on compatibility of devices. I had a bit of difficulty at the start as my card reader was unable to recognize the size of the card, with only available option in the FORMATTING TOOL at 1MB. Yes, you read that – 1MB. Didn’t work with Windows Disk Management utility either.

I tried it with my camera, the Canon Powershot G1 X as reader instead – it work! 😀 Nice ……… but CrystalDiskMark doesn’t see it as a drive. Nope. No can do.

I then tried it with my HTC Desire Z and it work! Strange though, a device released in 2010 with an expansion slot that was only rated as SD 2.0 compatible (this means support up to 32GB only Reference).

CrystalDiskMark recognizes it as a drive!!! However due to hardware limitation, it doesn’t do justice to the card.

As my last resort, I tested it on my Dell Inspiron Zino – my humble print machine (older than the HTC Desire Z) that houses an Intel Atom 230 with 1GB RAM. 😀 Worked like a charm!

The test was done with CrystalDiskMark 3.0.2c Below is a “text” version of the benchmark.

Benchmark aside, let’s do some real world test! There’s no better way than seeing how fast the writing speed is in real life!

The camera with the Toshiba unit managed to capture 12 frames (approx 422MB) while the Kingston captured 11 frames (approx 395MB). This is due to the variation between their write speed.

What does this test show?

1. The Kingston 64GB MicroSDXC lives up to the Class 10 rating.
2. Being a MicroSD Card, clearly this is suited more for mobile devices like tablets and phones but as you can see, it worked great even on a high megapixel camera!

The card not only gives you a whopping 64GB space, it also meets the Class 10 rating which is good enough for practically any other purpose under the sun. MSRP for the unit is $100.00 (about RM 310)