After having my power supply died a few weeks back, I finally have a replacement PSU.

This article was made possible by Cooler Master

One thing I must clarify – my review of PSU is limited, simply because I do not have the facility to perform load tests. Here are my thoughts on the Cooler Master GX 650W. 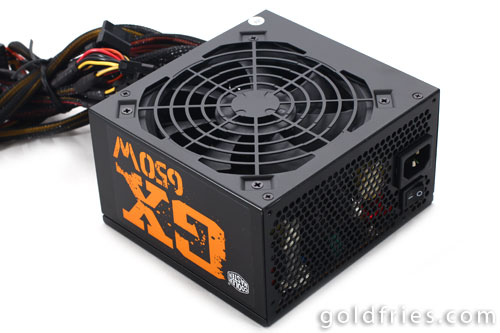 Looking at the image above, it’s looks like pretty much any other power supply out there.

I like that the 4+4 Pin CPU 12V cable is really long, I could fit a bunch of huge graphic cards on my system without having to figure out how to get the cable to reach the end of the motherboard.

On the down side, I prefer the fan grill to be a separate component rather than one that’s cut directly from the chassis.

[H]ard|ocp did a thorough test on the GX 650 and it wasn’t good. 🙂 My take is that while it failed load tests, it is still cheaper (about RM 340) than many other brands (around RM 400, and above) for 650w PSU and it should be fine for general usage.

How many of you actually reach a sustained 500w power consumption over more than 3 hour period? I bet most of you don’t so I think it shouldn’t be an issue. Anyway only time will tell, I’m running at about 250 – 300w constant 24/7 usage so we’ll see how long before I update this article on yet-another-dead-PSU. 😛

*Alright, it’s finally dead. It was dead somewhere in August 2011, around 6 months after the review. I didn’t know how it died but it I found out it was dead not long after part of the house electrical system fused. Coincidence? 🙂 Funny thing was the PC with the GX650 wasn’t even on ….. however since the loud “POP” was heard at the powerbox and around my computer area, I suspect it’s the GX650 causing it. All other components using the same power network did not suffer damage. Again…… coincidence?