At the back, just above the motherboard’s I/O cutout is the grill for fan mount. It takes up to both 120mm and 140mm fan sizes but what I’m disappoint was that the 120mm mounting points were only at one corner, and that’s at the corner closest to the board and closest to the PCI-E area. 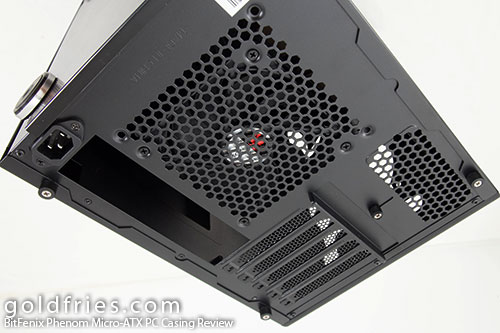 Logically BitFenix could have allocated a few mounting moints, I would prefer to have my 120mm fan mounted further from the motherboard and away from the PCI-E area.

In reference to the same image, the PCI-E components are locked via a single clip that’s secured by a screw. This design is not only ancient but it’s a horrible way to secure the components. BitFenix fail to consider that not all PCI-E covers are equal. Yes they’re equal because they all the same covers that BitFenix mass produced BUT this is not the case when you add other components. The height difference alone will make it all near useless.

Here’s video I made to prove the point.

That aside, there’s the bottom area that caters to various fan and even drive placements, pretty good design there. 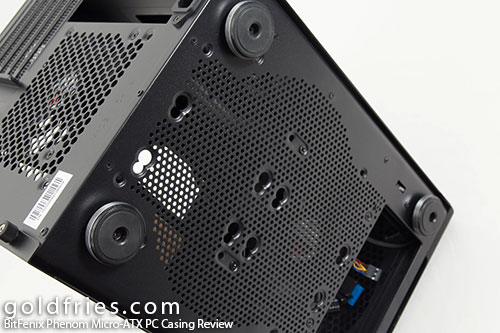 Here’s a top down view of the casing, through the roof at right to the bottom where a fan resides. 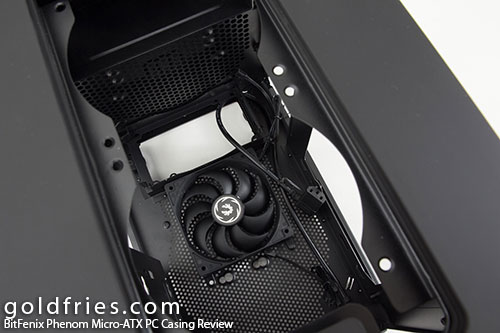 Here’s a view from the side. That area on the left is where you mount the PSU – this is the 2nd critical flaw in my book. In that position, the PSU’s output ventilation opening is now at the bottom. What this means is that heat is released not as fast as it could from a PSU, in my case I notice the PSU’s fan spins far more rapidly than ever as it tries so hard to dissipate heat from the components. 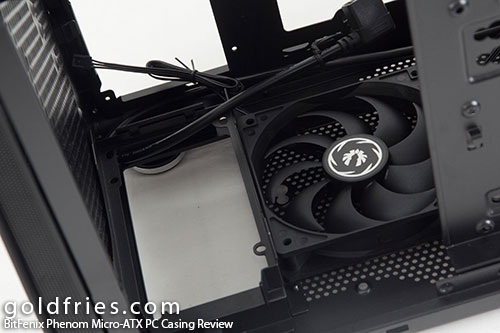 Here’s the panel where you mount the motherboard. Note also that there’s little to no space between motherboard panel and the case panel for cable management. 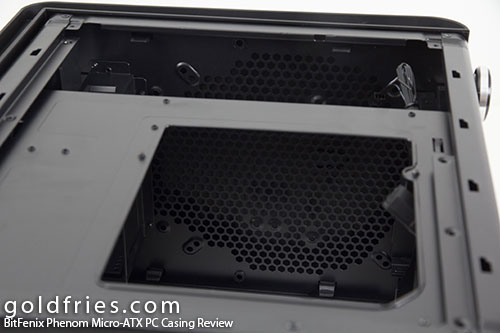 In the end, this was my setup, albeit a challenging setup that takes so much effort (I broke my “effort” record here). The Prolimatech MK-26 on my Sapphire R9 280X is passively cooled, with 2x JetFlo from Cooler Master as the exhaust for the system, including moving the hot air away from the MK26. The SSD was placed such as I’ve removed all the panels for SSD placement and I’ve no intention to place it at the bottom of the casing for a much neater looking casing. Cable management was near impossible so everything had to be tucked towards the front area, you should see some cables on the upper left side of the image above.

The casing retails at around RM 320 and it is aesthetically gorgeous! I even modified the front panel to include some white LED lights made the logo glow in awesomeness BUT I can’t recommend this casing to anyone. 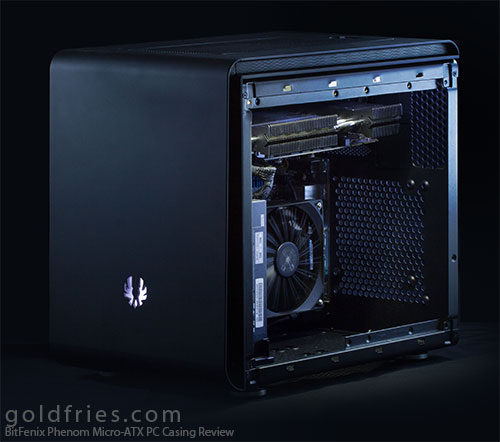 Firstly – the PCI-E holder. It just doesn’t work, there’s no reason to have a casing that could potentially damage your PCI-E components like your graphic card that is likely to cost a lot more than the casing itself.

Secondly – the PSU positioning, why buy a casing that doesn’t help with the PSU’s airflow? It’s bound to deteriorate the PSU at a much higher rate.

Thirdly – what’s the point of having a removable grill that I can’t even put normal fans there? It’s practically a useless empty area.