The EeeTop PC ET1602 is an All-in-One Touch-screen enabled light-weight desktop from ASUS. 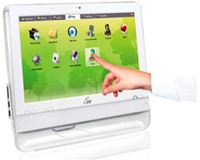 The Asus EeeTop ET1602 is a light-weight All-in-One desktop, so light that it could also be called a portable desktop. Yup, you heard that right. So light that it comes with a handle for you to move it to any where you want, as long as there’s space to place the unit.

Being a touch-screen unit, you could use it without even using a mouse or keyboard. Space isn’t an issue, and the EeeTop doesn’t take up much surface real-estate for placement. As you can see from the image above, the ventilation opening are also placed on top. 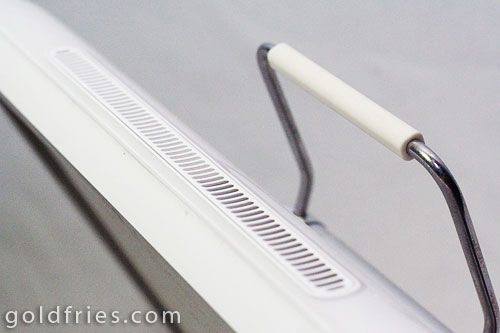 The EeeTop has 2 USB 2.0 ports on the left, along with a card-reader. Nothing on the right side of the unit. 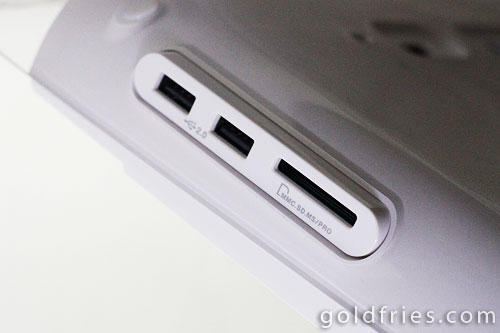 At the back, a generous amount of USB 2.0 ports. There’s 4 in total, with 3 towards the right side of the unit while 1 on the opposite end. 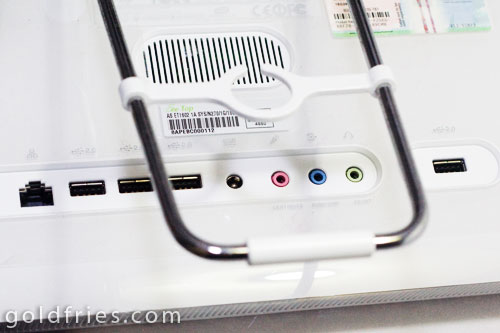 I like this placement, as I could use decide which direction should a USB device come from. For me, the keyboard wire went to the left side of the unit while the mouse on the right side.

Besides USB ports, there’s also a LAN port, audio output jacks for mic, headphone and also 2.1 speaker support (now this I like too!). The stand is foldable too, helps a lot when comes to moving it around.

Specifications for ASUS EeeTop PC ET1602 are as stated on the official product page, and here’s EeeTop’s mini-site.

I must say I’m pretty impressed with the EeeTop. Before we proceed, let’s have a look at the interface the provided for Touch Screen.

As you can see, the unit comes with a lot of applications pre-installed. I would say it’s actually more than what most users ever need. There’s a bunch of OpenOffice applications that makes the unit READY FOR WORK. That’s good. The interface is linked to not just the common applications but also the options in Control Panel.

The custom-made games were simplistic as you can see, Adventure Under The Sea looks pretty much “Finding Nemo” based. Eee Band was rather interesting – although there’s just 3 levels, I found myself playing it again and again to beat my own record. 🙂 You’ll be surprised that this game could show you the variance between your left arm and right arm’s coordination with your eye and brain. 😀

My only gripe is that I get some error messages which (the Illegal Operation thing) on a few application which I think this part Asus would have no problem resolving.

It’s based on the Intel Atom N270, so don’t expect the unit to do high-speed data crunching. The N270 is not a high performance processor but it’s great when it comes to power consumption. This is why the EeeTop consumes little energy, not generation huge amount of heat, thus able to remain in silent operation.

Other details you might be interested in (in case you haven’t browsed the official product page) is that the system comes with 1GB DDR2 and a 160GB 5400RPM hard disk.

The display is power by Mobile IntelÂ® 945GM Express Chipset, again – don’t expect fancy 3D acceleration from this, just understand that the unit was meant for the average user who doesn’t need graphical power. The system also comes with a 1366×768 resolution 15.6″ screen, accompanied by a 1.3M pixel Web camera.

As for the audio, I found that the sound output was decent in volume and clarity and I love it that they placed the volume and screen brightness controls on the unit itself, which means you could adjust the volume and display brightness without having to resort to screen tapping. 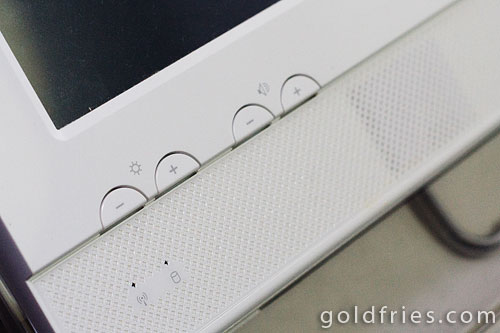 The onboard speakers are more than enough for listening to tunes or browsing Youtube. It’s a good thing they provided a 2.1 speaker output jack – go ahead and hook it up to your Klipsch speaker or whatever that floats your boat! 😀

What I didn’t like about the unit was that the keyboard bundled has poor layout. It’s not the usual keyboard where the @ is on 2 and # is on 3 – I think the shifting of these 2 buttons alone spoil the experience. 🙁 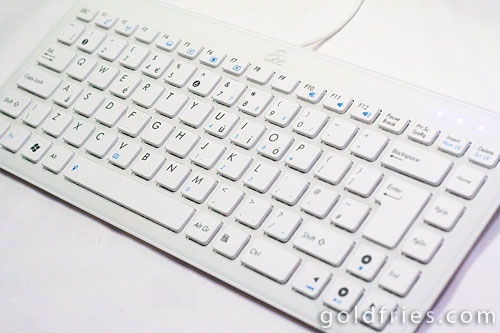 Nothing to complain about the mouse though. 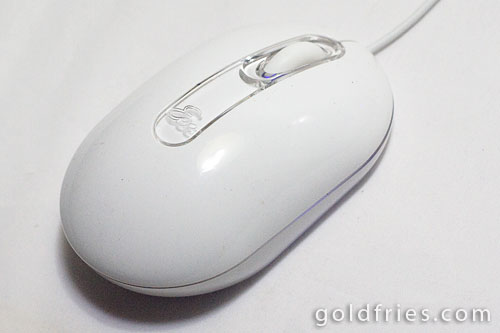 I couldn’t be bothered with LAN since they always work and they work the same. 😛 The system comes with an onboard Wi-Fi device supporting 802.11n and it had no problem establishing connection with my 802.11g Wi-Fi signals.

One last thing – the unit has an ON/OFF display button, placed just next to the POWER button. (It’s dark, I know….. I need to show the blue LED.) 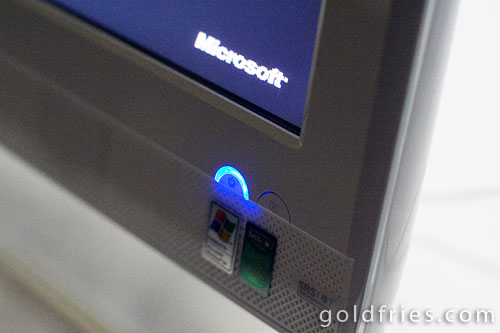 It’s a feature that I always like to see on All-in-one unit, my usage style being I always prefer to leave the machine as it spares me loading time so the function to off the display panel is helpful in energy conservation.

Another neat thing about the EeeTop is that it uses a small power adapter that’s like those used by netbooks – I think this is a plus-point for the system’s portability.

The EeeTop is a very handy All-in-One, much thanks to the small foot-print and portable nature. While it is rather low in spec and could fail to satisfy the market who is in demand of higher processing capability, I deem the unit sufficient for the average person who just needs a device to improve their lifestyle.

Think about it, it’s a really handy unit to be placed in the kitchen where you could use it to refer to recipes or cooking tutorial videos as you embark on creating the next culinary masterpiece. If not, how about using it as a simple entertainment unit for kids? Whatever it is, you could bring it anywhere – even if it’s a journey to your grandparents’ place 300 kilometers away. 😀

The possibilities are endless, the only drawback of the EeeTop would be the lack of optical drive so you’d have to fork out another RM 200 or so for an external DVD drive.

Now your problem would be deciding whether to acquire a notebook instead of an EeeTop that retails around RM 2,500. 🙂