The ASUS A88X-Gamer looks like an ROG board with its red and black color scheme but it isn’t, so what is it? 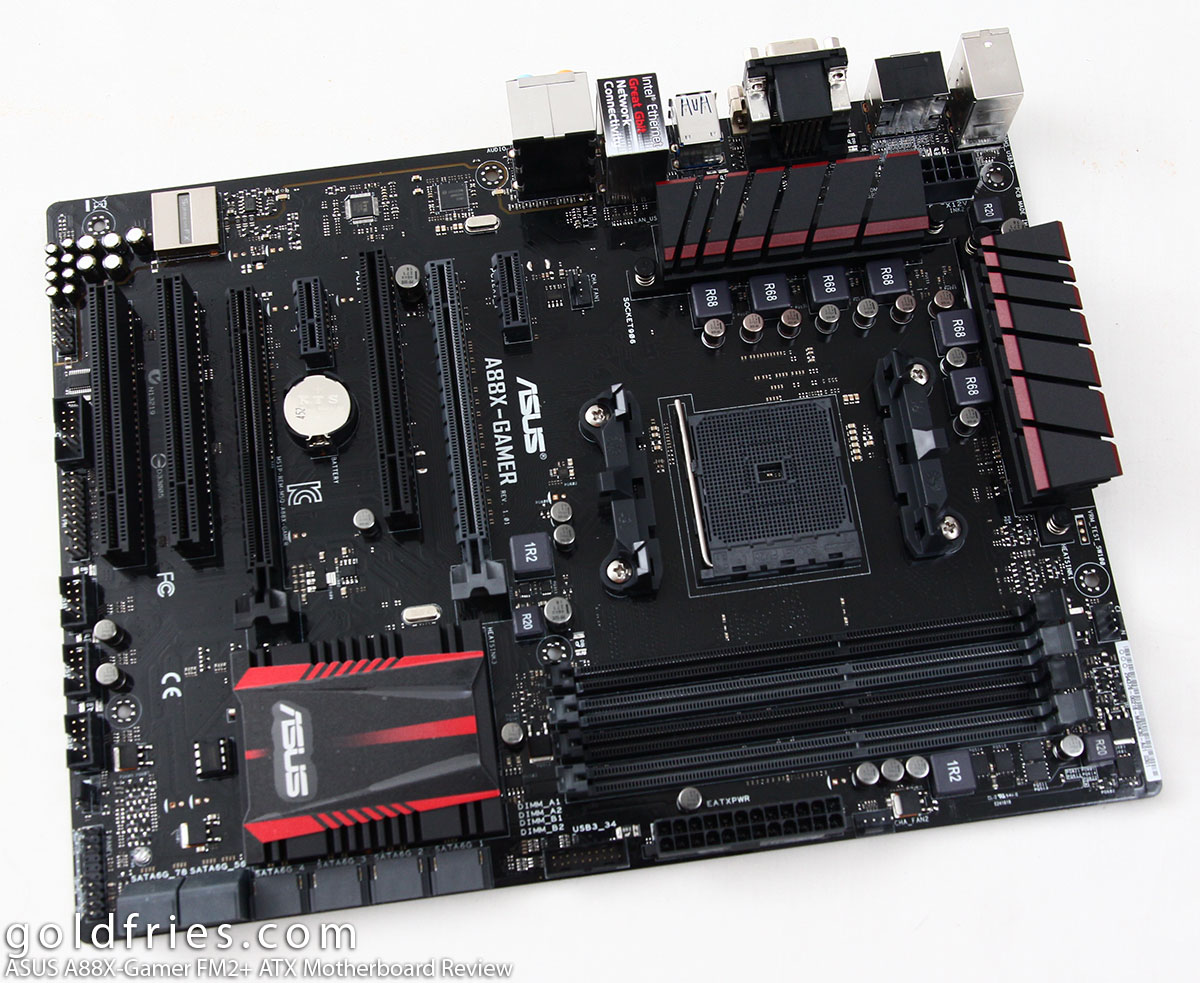 To make things simple, the A88X-Gamer is the “gamer” version of the A88X-Plus.

Starting off with the upper corner near the I/O ports, the board has an ROG-like heatsink but without the advanced MOSFETs and chokes as seen on the Crossblade Ranger 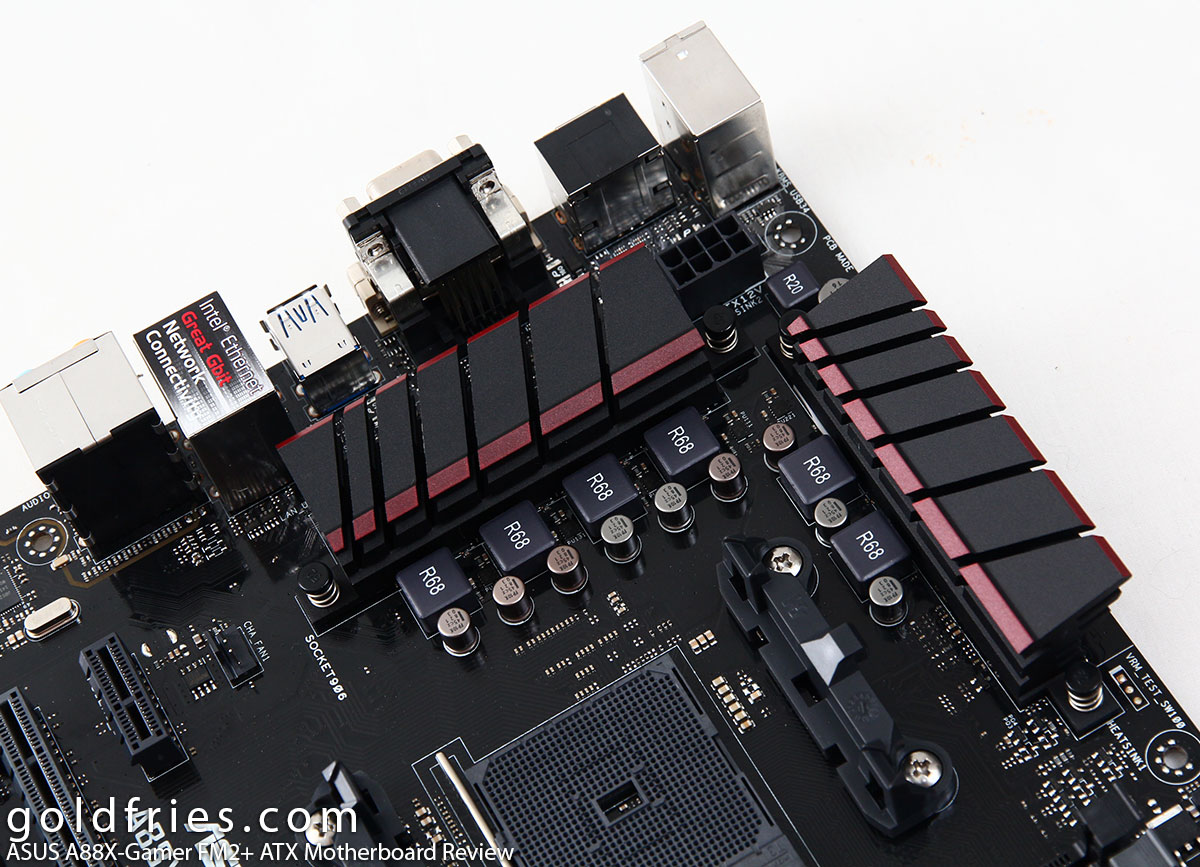 The board supports up to 4 sticks of DDR3 2400 RAM, it doesn’t have on board POWER or RESET button, and neither does it have any debug LED. 🙁 The board is as simple as what you see. 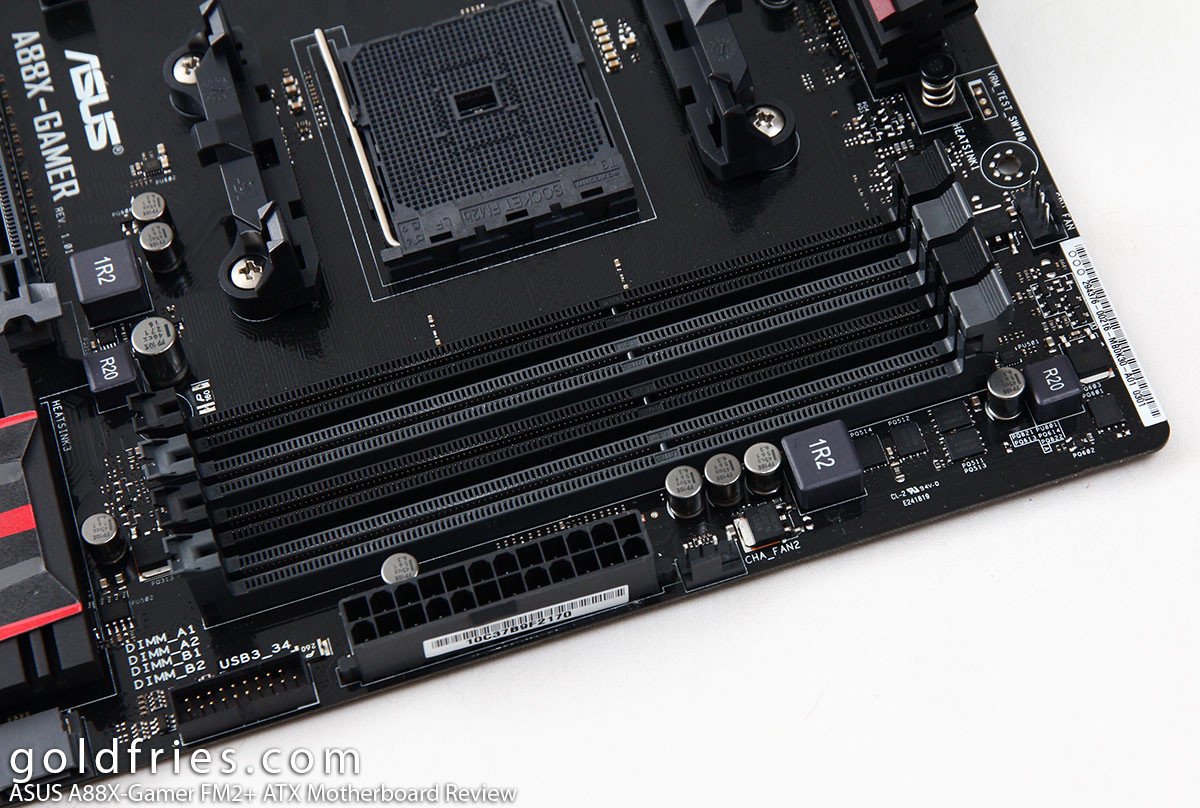 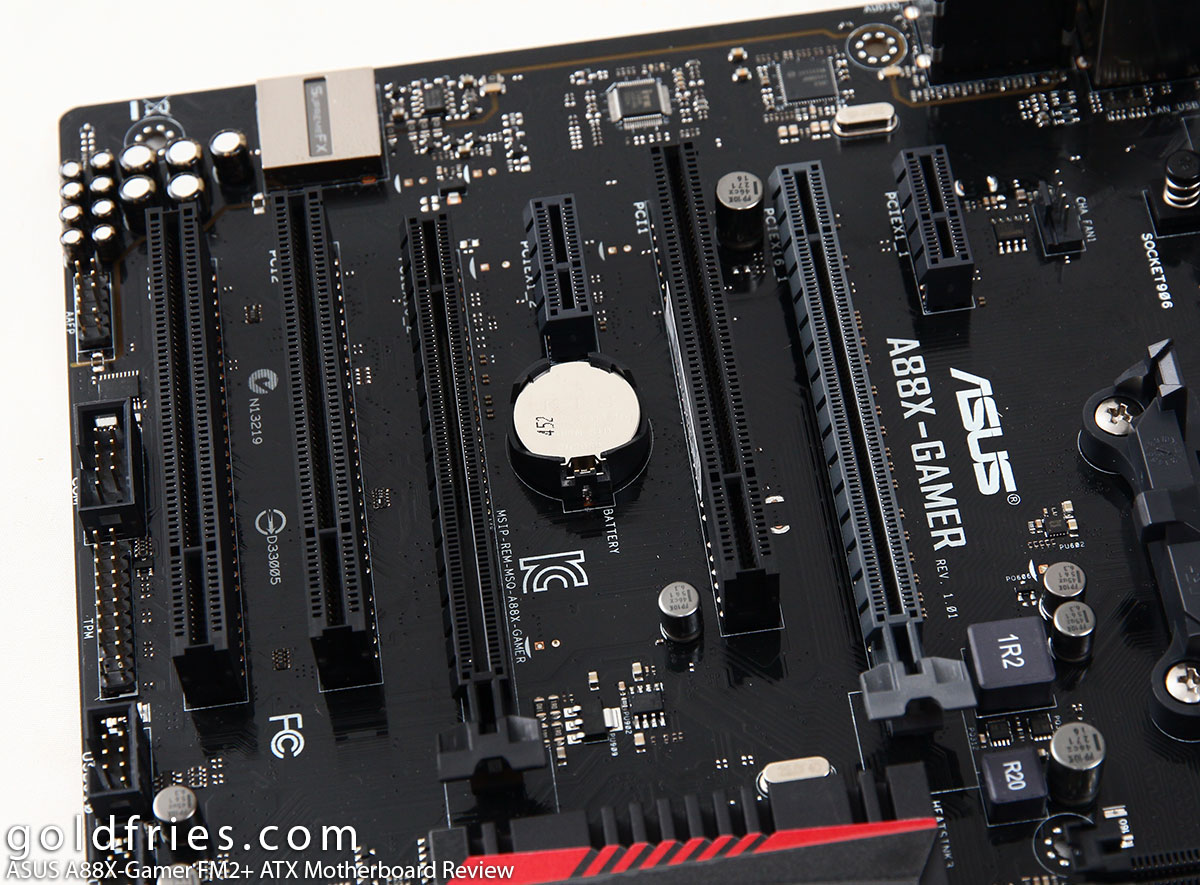 The A88X-Gamer also comes with the red LED strip that’s part of ROG’s design like the one seen on the ROG Crossblade Ranger and ROG Maximus VII Ranger Z97.

While this isn’t an a board from the ROG series, ASUS is generous enough to include SupremeFX with SoundStage for the audio system. 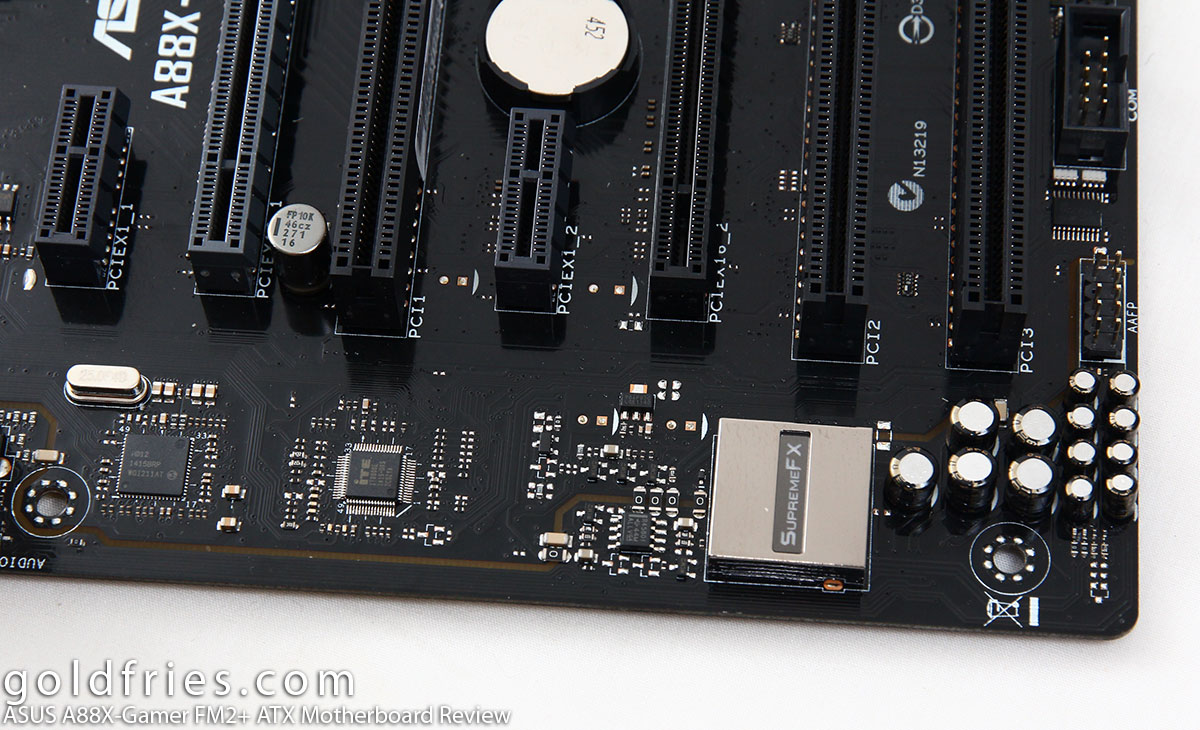 And not only that, the A88X-Gamer also comes with LAN Guard on the RJ45 port, which is a plus for it! 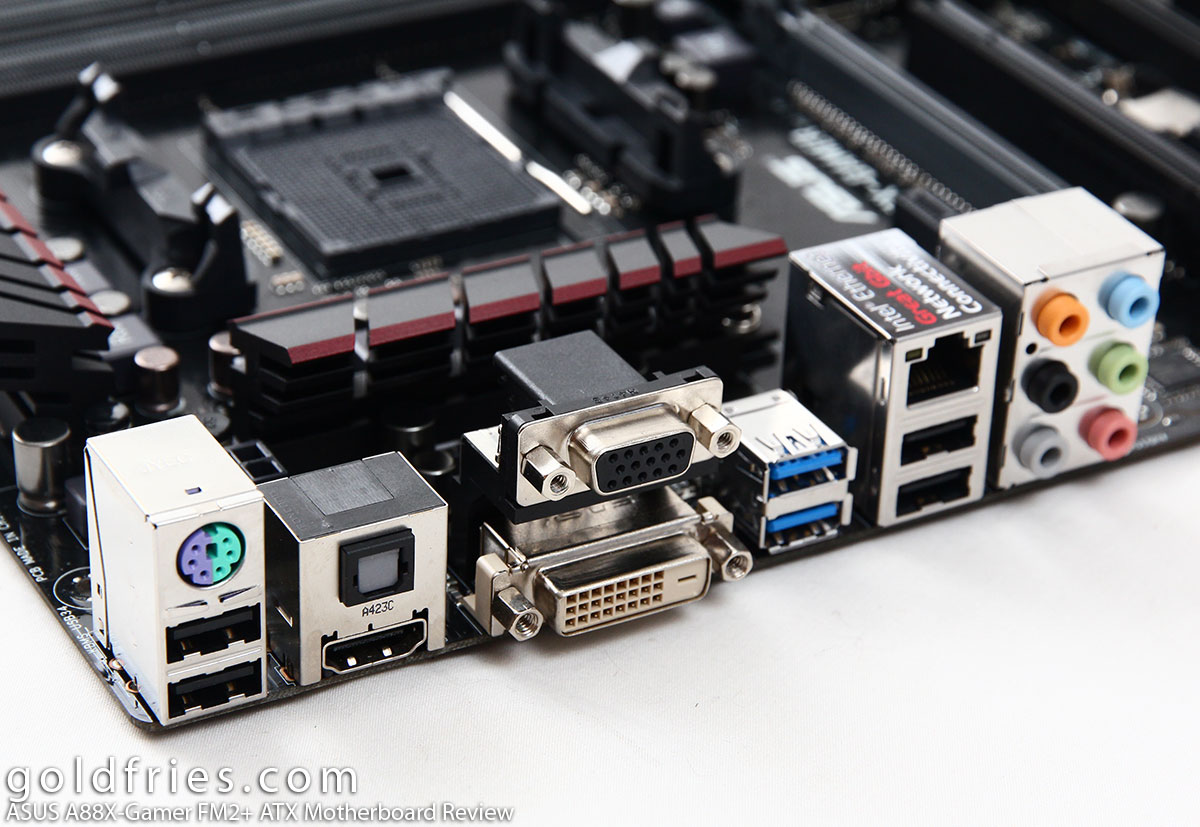 As you can see the A88X-Gamer is no slouch when it comes to I/O ports either.

I wasn’t expecting much from the A88X-Gamer board but I’m amazed by what it did for my APU, a little more on this later. 🙂

The A88X-Gamer’s UEFI interface is set to EZ mode by default, it gives a good summary on the system. 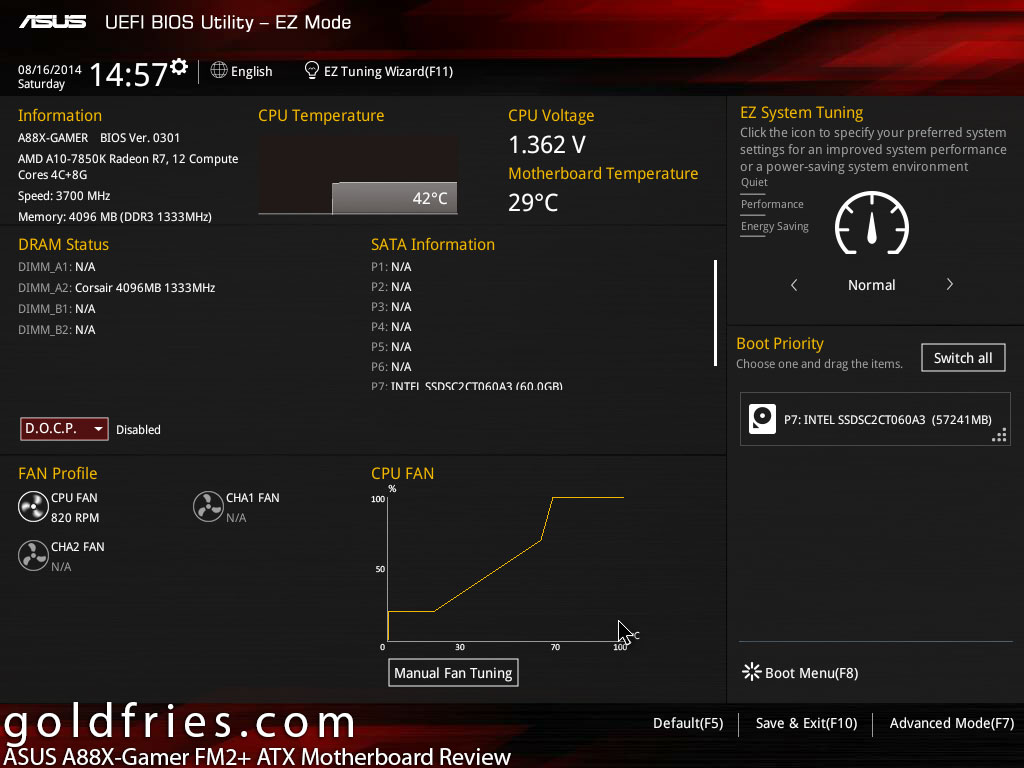 It has an Advanced mode UEFI interface that looks quite similar to the one on the ROG, minus many advanced settings. For one, there seems to be only OFFSET MODE for the Vcore settings. 🙁 I also didn’t like the interface’s animation, how the menu appears on screen by sliding from right to left upon changing tab. 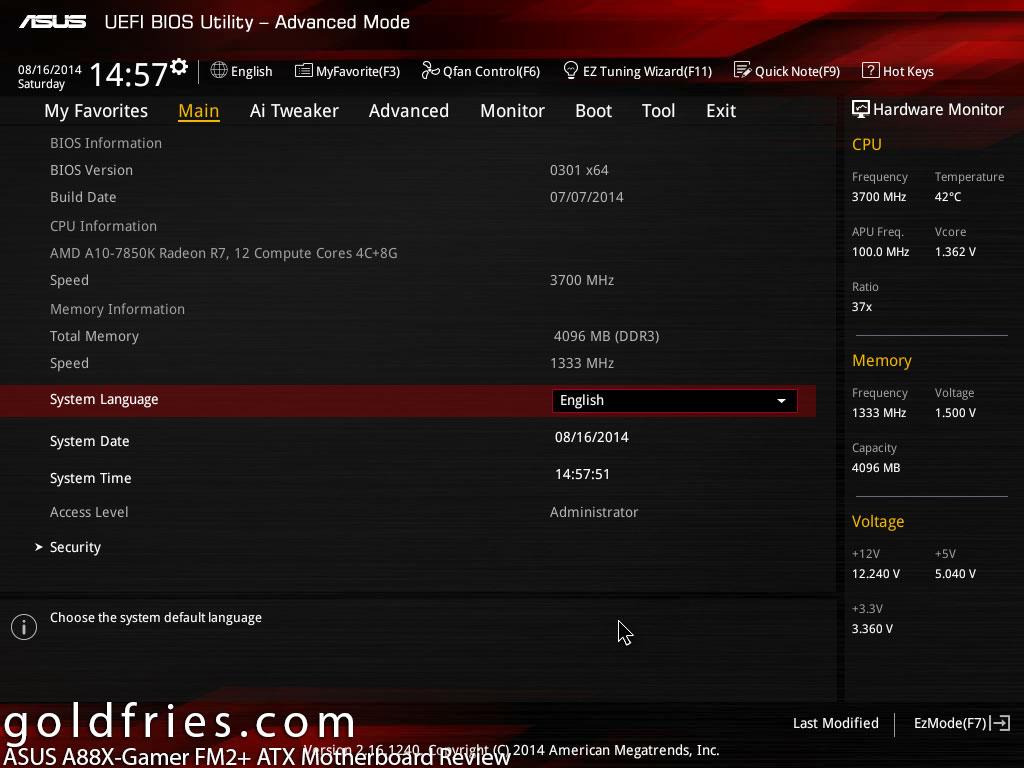 Just like the A88X-Pro, my AMD A10-7850K APU reached 4.4Ghz without doing any changes to the VCore. What amazed me was that I managed to push the APU to 4.5Ghz, something I wasn’t able to accomplish with neither the A88X-Pro nor the ROG Crossblade Ranger.

The system even passed my video encoding test without crashing but I noted that the clock speed went on a roller coaster ride from 4.5Ghz to 3.4Ghz and up again. I haven’t found a way to get it to run at 4.5Ghz stable but at least it doesn’t go into a freeze in Windows desktop like the A88X-Pro and Crossblade Ranger.

The ASUS A88X-Gamer retails at RM 409, which I think is a pretty good price for a board that still does overclocking and comes with great features like SupremeFX audio system and LAN Guard.

The A88X-Plus was a good alternative for those who do not need the added features of the A88X-Pro but with the A88X-Gamer, it looks like that additional RM 20 from the A88X-Plus’ price could be well worth it, even if it’s just for the better audio system and LAN port (better speed and protection).