The FX-9590 is AMD’s current flagship processor, of which AMD claimed (a few months ago) to be First-Ever 5 GHz Processor. 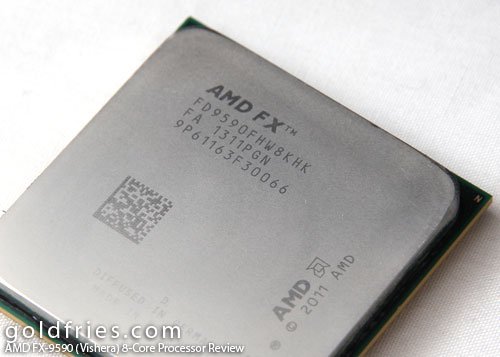 Is truly a 5 Ghz processor? No it isn’t, even the AMD Desktop Processors comparison table doesn’t list it as 5 Ghz. The 5 Ghz is only the TURBO CORE speed, this is like Intel’s Turbo Boost where the system is able to attain higher speed when there’s less cores used.

Check out the CPU-Z below….. 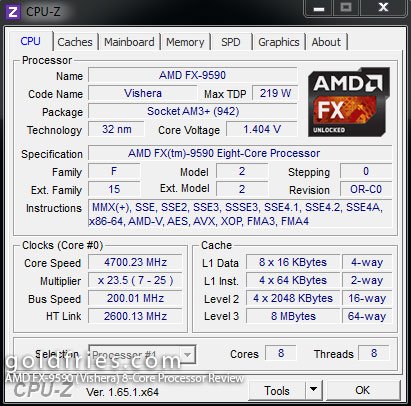 In goldfries.com’s controlled temperature environment, the processor idles at 43c and peaked at 73c on load even with the CM Seidon 120M. The FX-8350 only registered 56c on load.

Overclocking wasn’t easy. I tried my very best to get it to run at pure 5Ghz but it’s just very difficult to get it to run stable. Best I could do is just reach desktop, and best stable overclock I could get is 4.8Ghz stable, which is pointless.

The FX-9590 is also the first processor to ever refused a power-up even with my 600w PSU unless I used a graphic card that’s not demanding, like say a HD 6670. Being a 220w monster, you need not only a good AMD FX-chip based board with good VRMs to handle the power load but you will also need a good power supply to work with it.

To pair with with a GPU (like say the HD 7970), I’d recommend going for something like the Corsair AX860i or the Cooler Master Silent Pro Hybrid 1300w.

Speaking of 220w monster, you need a good cooler to work with this processor as well. So with all the points so far, you won’t be seeing our recommendations badge here. Sure, if you already have an AM3+ system and want the best and most powerful processor out there and have cash to spare then why not but then ……… WHY!??!?!

An FX-8350 costs far less, performs almost equally well after overclocked and doesn’t have the nasty power requirement, nor does it generate heat link crazy either.

Good try AMD – the FX 9590 does beat all AMD processors out there in the market but it’s just not a cost-effective solution to recommend to anyone.