Don’t Blame The Game When It’s All About Ergonomics

A recent article published on a Chinese newspaper claiming playing games such as Candy Crush, would lead to injury of the hands and wrist. 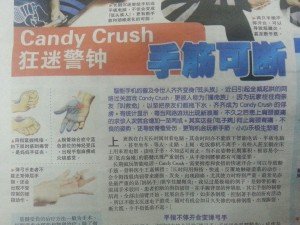 Part of the article mentioned “éœ€è¦æ‹‡æŒ‡å’Œé£ŸæŒ‡çš„å¿«é€Ÿå¼€åˆ”, translates as “Requires rapid opening and closing of the thumb and index finger”. (I read Chinese, but the translation here was provided by Google. Just in case. 😛 )

Now, I’m not the type that likes to pick on other articles and give it a bash but this one really calls for such attention. The article is misleading, to blame a game for physical problem is just as good as blaming a TV show for your back strain as you spend 8 hours on a mini-series marathon.

What’s the problem with Candy Crush?

Nope, there’s no problem with Candy Crush. I’ve played over a hundred levels with probably a few hundred games completed. Here’s the thing to note.

Firstly – the game give you 5 lives only, how on earth could one play until sustain injuries? Impossible. I spent way more hours on Asphalt 7 per session on my Galaxy Nexus with no problem at all. Sure, I played till my arm muscles ache but that’s because I was holding the device up and steering my car around.

I’ve played Air Attack HD until my fingers blister due to the massive movement, and I’ve played other games like Infinity Blade and Dungeon Defenders, all of them are straining because the 1st generation iPad was heavy and the game requires many movement, and often fast ones too as you need to react based on the game. They hurt a lot more after long hours of gaming.

Secondly – the article mentioned éœ€è¦æ‹‡æŒ‡å’Œé£ŸæŒ‡çš„å¿«ä¹¦å¼€åˆã€‚ (translation provided earlier). Candy Crush is slow game. Speed is only needed when you are when the level requires you to reach X score in Y seconds. That also not exactly needing super fast speed motion, they’re nothing close to the games I mentioned earlier. And for the record, my wrist and fingers go through a whole lot of motion when playing Real-Time Strategy games, for example StarCraft II campaigns in Brutal mode. If I were to match Candy Crush’s game pace to an animal, I’d say it’ll be a tortoise on land.

Thirdly – there’s no rule on what fingers you want to use. Most people play Candy Crush with either a thumb on smaller device, or index finger on tablets. Either way, no fixed rule. No high speed requirement needed.

No game is to be blamed for physical problems encountered during the gaming experience. Playing games, regardless whether it’s on phone, tablet, console or computer – is all about ergonomics.

With a good set of mouse and keyboard, the gaming experience will be a lot better than playing them with a lousy setup. Even the choice of seat, the sitting posture, angle of arm and everything else affects the experience.

I played StarCraft II campaign for 12 hours straight, my fingers barely ache after the whole session because I have a decent setup that is comfortable for long hours of gaming.

With that, I’ll end my article. Have fun with your games, and take note of ergonomics and you’ll be able to enjoy the games better.