Backup Your Data – Don’t Regret For Not Doing It!

To backup data isn’t something complex; it just takes a little effort to spare you from an additional memory of regret.

How many times have you felt regret for NOT backing up your data? Especially your E-mails and your photos? You should make it a practice to backup your data, perhaps every month at least.

More critical items would best be done at a more frequent interval. For me, I back up my photos, web design artwork and HTML files, and also E-mails on a monthly basis whenever possible.

To me, backup is absolutely important. Photos that I took are not something that I could re-create. As for my work, I could always re-create them but if I were to lose them overnight, it’s still VERY BAD as I would have to re-do everything and this means I’ll be setting my clock back by days or in worse cases – MONTHS!

I think all of us could agree that backup is important but not all of us know the means of doing backup.

Here’s how you can go about backing up your precious documents and data.

Optical media are like CD, DVD, Blu-Ray discs and any other similar form of writable media. They’re commonly just WRITE-ONCE unless they’re stated to be the re-writable version which costs a lot more.

While being common, it is less common than before as the dawn of shrunken computers like netbooks, small sized all-in-one PC and notebooks is also the dawn of computers that are without optical drives.

Optical medias remain the cheapest way to pass information to people, makes more sense than passing to someone documents using a Flash Drive or external hard disk unless the situation requires it. Optical Media are cheap, light and flat, hence making it cost effective for write once and delivery it via postage.

DVDs come with 4.7GB storage space, and I’ve seen it being sold for less than RM 0.90 per piece, which comes to a whopping RM 0.19 per GB which is really cheap. I’ve also seen Blu-Ray discs going at RM 10 per piece, with 50GB capacity it comes to around RM 0.20 per GB.

Despite having great value per GB, the problem is that if you’re writing only 1MB data on a 4.7GB disc, it’s really a huge waste. More often than not, you’re often using not even half of it. In my case, I find that I use blank CDs for most cases as it’s cheaper. I’ll resort to using DVD when the content to burn is more than what a CD can handle. I’ve not begin to use Blu-Ray as it’s not only costly to adapt on my end, most people still do not have drives that read Blu-Ray discs.

Another issue with optical media is you need to know how to burn it, although operating systems have made it much more user-friendly for people to burn stuff, it’s just not as convenient as other medias that are just drag and drop, copy and paste.

Somehow the hard disk doesn’t come to mind when people talk about backup but for techies, we actually do back up to hard disks.

The hard disks could be resizing within the same computer itself, or it could be residing in another computer. For people like myself who have the luxury of owning multiple computers, I often backup my important data across a few of my PC.

Hard disks are cheap these days and the more you pay, the more value you get per GB. I’ve seen 1TB (that’s 1000GB) hard disks retailing for around RM 290, that comes to RM 0.29 per GB. That’s an awesome price to pay for a super huge storage and works really fast, especially when within the same computer.

The only drawback for hard disks is that it’s not portable, unless…………

Yes, the portable version of hard disks! In reality, it’s pretty much the same thing.

You have 2 options, one is to buy an external hard disk like the Maxtor Basics 750GB External Hard Disk that I reviewed. 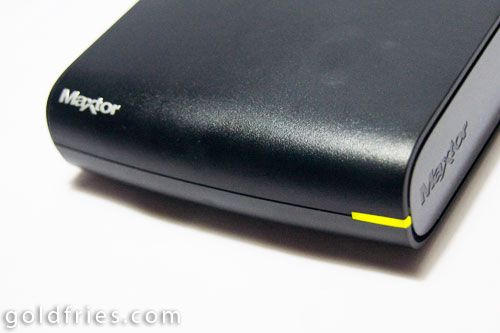 Another option is to buy an external HDD enclosure where you could mount any regular hard disk to it and make it an externally usable hard disk. 😀 They’re convenient, not exactly something you’d deliver to clients but it’s sure a handy way to share huge data collection with friends, family, colleague and so on. Normally you only pass the external hard disks (or hard disks) around with trusted people, I do that with my nephew.

Convenient, portable and it comes in many shapes and colors, this is THE backup device that also doubles up as a fashion accessory!

The most important thing to note is that flash drives are USB based and this means it’s usable in practically any machine that’s available today and for years to come. In fact, it’s even usable in machines that are more than half a decade old as machines back then also had USB port already, just not as many port per PC as we have today.

While being small and portable, it is less convenient than the Flash Drives as it requires the computer to have the appropriate slot to read or write it, which unlike the Flash Drive that uses USB which is found on every computer.

They come in many forms like Compact Flash (CF), SD / SDHC (high capacity SD card) / MicroSD, XD, Memory Stick and so on, and the cost varies. Even their writing speed alone affects the price.

There are such online services like Box.net and Elephant Drive where you can backup your document online. Elephant Drive seems to offer unlimited space for a tiny sum.

There are other online services like Nortonâ„¢ Online Backup 25GB and Asus Web Storage but obviously that’s for people who are using their product.

Then there’s another way, which is to backup to your web hosting service. 🙂 For example, if you already have a website with 100GB storage space and you’re not even using up 3MB, you could always backup whatever you want to the server.

The downside, or should I say FEAR when it comes to online services, is that there is a risk of a backup failure at their end or in an even darker scenario, the company went under without notifying you before-hand.

Floppy disk? They’re almost dead. With only 1.44Mb size for the 3.5″ disks, it’s barely enough to backup documents unless all you backup are tiny text files.

I do know some people and companies that are still using floppy disks for exchanging of small documents. Small documents, as in anything that’s less that can be stored on the 1.44Mb disk. It’s still more cost effective than burning a CD each time a data needs to go some place else.

From what I noted, floppy disks nowadays are only used by people don’t use E-mail. Yes, such people do exist. 🙂 Most people would just prefer to E-mail the files over, just attach the files before you leave your desk and click SEND when you’re done. The other party would get it in no time, still beats meeting up to exchange the floppy disk.

Among these forms of backup, the one I often recommend to people around me is to backup to a Flash Drive.

With 4GB space, it’s more than enough to back up documents, E-mails and random photos of sweet memory. 🙂

You can keep it safe with you anywhere you go while backing up is just as easy as plugging it into the USB port, which is a great things since it’s no different from moving documents to other folders on your machine.

It’s small, taking up less foot-print than optical media (they’re flat but they take up quite some space!) and they’re certainly much lighter and cheaper than external hard disks. Accessibility wise, they’re still better than optical media and Internet storage.