Steam for Linux Now Available (with a SALE too)

By: goldfries
In: Games, Tech News 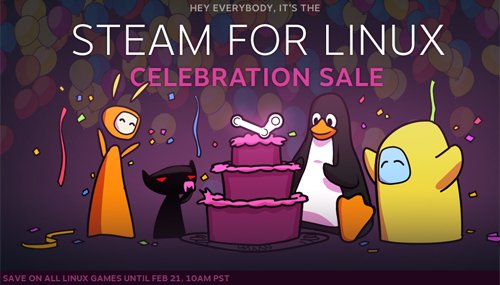 Feb 14, 2013â€“Valve, creators of best-selling game franchises (such as Counter-Strike and Team Fortress) and leading technologies (such as Steam and Source), today announced the release of its Steam for Linux client. In celebration of the release, over 50 Linux titles are now 50-75% off until Thursday, February 21st at 10 AM PST.

The Steam client is now available to download for free from the Ubuntu Software Center. Ubuntu is the most popular distribution of Linux used by millions of people globally and known for its well-designed, easy-to-use customer experience.

It’s good to hear that Linux users now get to enjoy Steam as well, though the games are still limited.

While Valve announces Steam for Linux, one must take note that it is recommended to use Ubuntu distribution.

Looks like it’s time to get one of my rigs up and running with Ubuntu. 🙂