Consumers want to capture and share memorable experiences with their smartphone. We want to take people on a journey from capturing pictures to recording and sharing their lives. The Nokia Lumia 1020 brings new meaning to pictures and continues to strengthen Nokiaâ€™s leadership in imaging. The Nokia Lumia 1020 is the first smartphone to exceed many standalone digital cameras in terms of image quality capture ensuring users always have that perfect photo â€“ day or night,

The second generation PureView technology from Nokia enables the Lumia 1020 to produce some of the sharpest images possible by any digital camera.

The camera also has this dual-capture feature that simultaneously takes a high resolution 38 megapixel image and a 5 megapixel, to make it easy to share on social networks with Windows Phone 8.

The new Nokia Pro Camera app reinvents the zoom feature, allowing people to shoot first and zoom later to discover and re-discover stories that contain more detail than the eye can see.

The Interface of the Pro Camera app is as seen below and from what I’ve seen so far, it’s hands down the best phone camera UI ever! 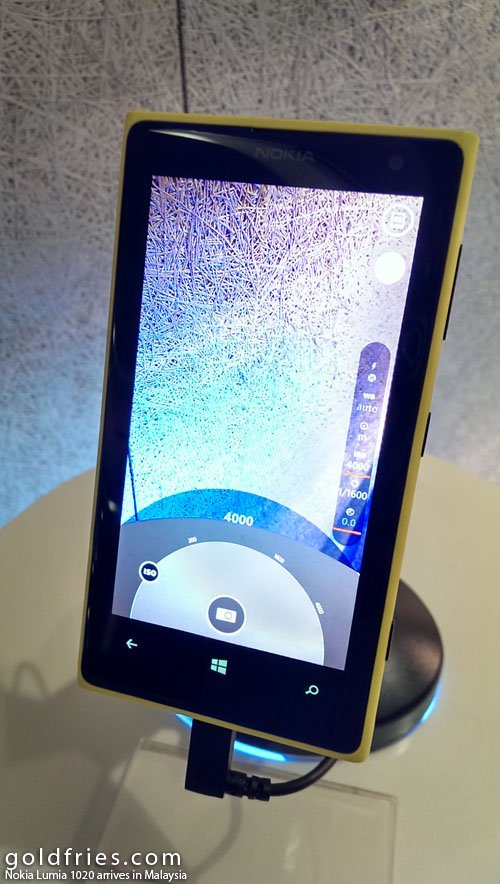 It is yet another Lumia, with an awesome camera. 🙂

I can’t tell the difference between 1020 and the 920. 😛 Nevertheless this is the best Lumia released till date, so see Nokia ends their legacy with such an awesome device.

The Nokia Lumia 1020 will be bundled with the camera grip accessory and will be priced at RM2,499 and will be available at the end of Sept for the Klang Valley and beginning of October for the rest of Malaysia.