Mantle Renderer made available in Battlefield 4

Just a few hours ago, the Technical Director for Frostbite Team announced that the latest Battlefield 4 update on PC includes the long-awaited new renderer in Frostbite that is using AMDâ€™s Mantle. 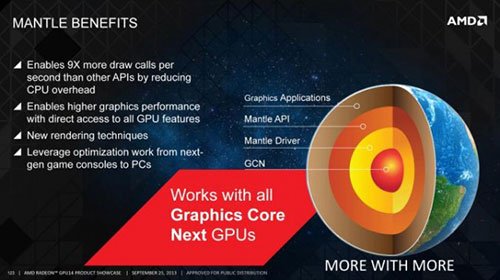 Mantle is AMDâ€™s low-level API solution that aims to negate some of the performance overhead of higher-level APIs (DirectX and OpenGL). AMD has touted it as â€œbare metalâ€ programming, where developers will have unparalleled response times from the GPU to render graphics faster. Overall, the goals include reducing the overhead of processing commands, adding control of the command buffer, reducing the shader compilation overhead, and perhaps best of all, properly scale to multiple CPU cores.

AMD stresses that Mantle works best when a game is CPU-bound, not GPU-bound â€“ if a game is GPU-bound, it tends to stress the card to such a degree that Mantle-like optimizations will not help much at all. That said, those who will see the best benefit of Mantle will have modest PCs â€“ something weâ€™ll see evidenced in the results below.

Summary above from techgage.