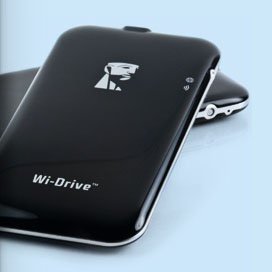 The free Wi-Drive App* is available for Apple devices in the App Store, for Android OS devices in the Google Play App Store and for Kindle Fire in the Amazon App Store. The device allows simultaneous data access and file sharing for up to three users on their preferred mobile device. Thanks to a variety of Android-based devices and their versatile user experience, users can access and share their files via web browser or the Wi-Drive App.

Kingston is celebrating 25 years in the memory industry. The company was founded on October 17, 1987, and has grown to become the largest third-party memory manufacturer in the world. The 25th anniversary video can be found http://www.kingston.com/us/company/25_years as well as more information including a timeline of Kingston’s history. In addition, HyperX memory is celebrating its 10th anniversary. The first HyperX high-performance memory module was released in November 2002.