The much awaited super affordable Tecware Phantom Mechanical Keyboard has arrived at goldfries’ lab and I can tell you, I’m just as excited over this product as anyone of you. 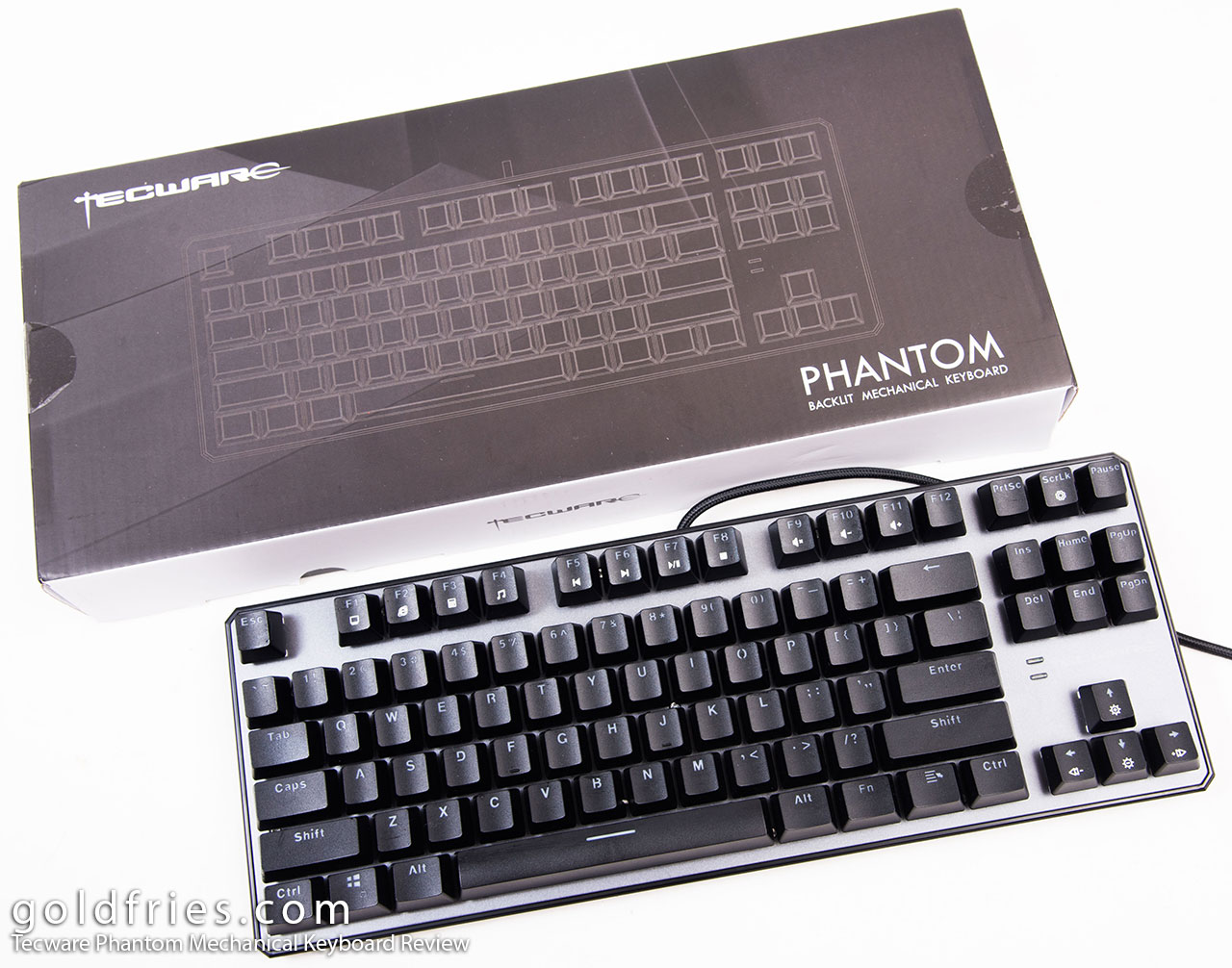 Before we look at the keyboard in detail, let’s have a look at the features and specs in the image below. 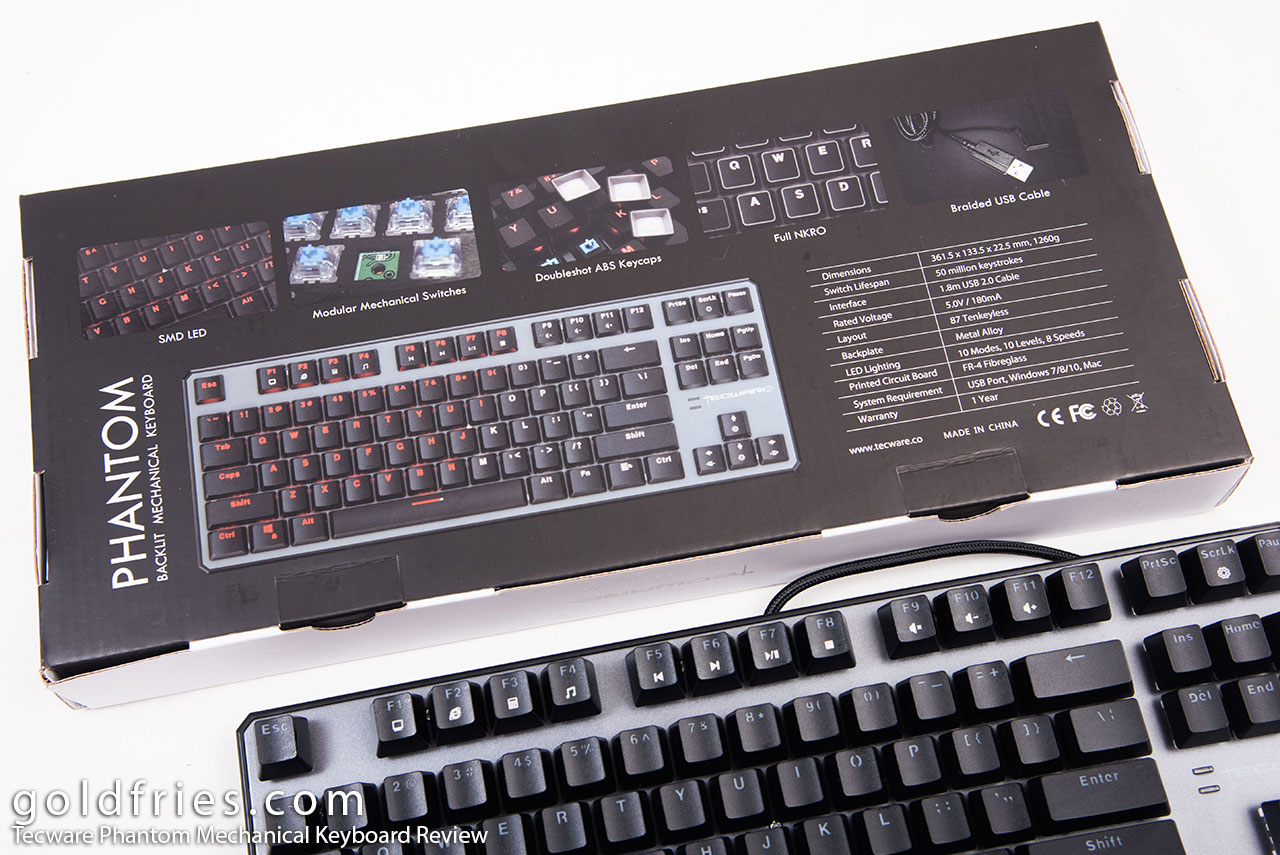 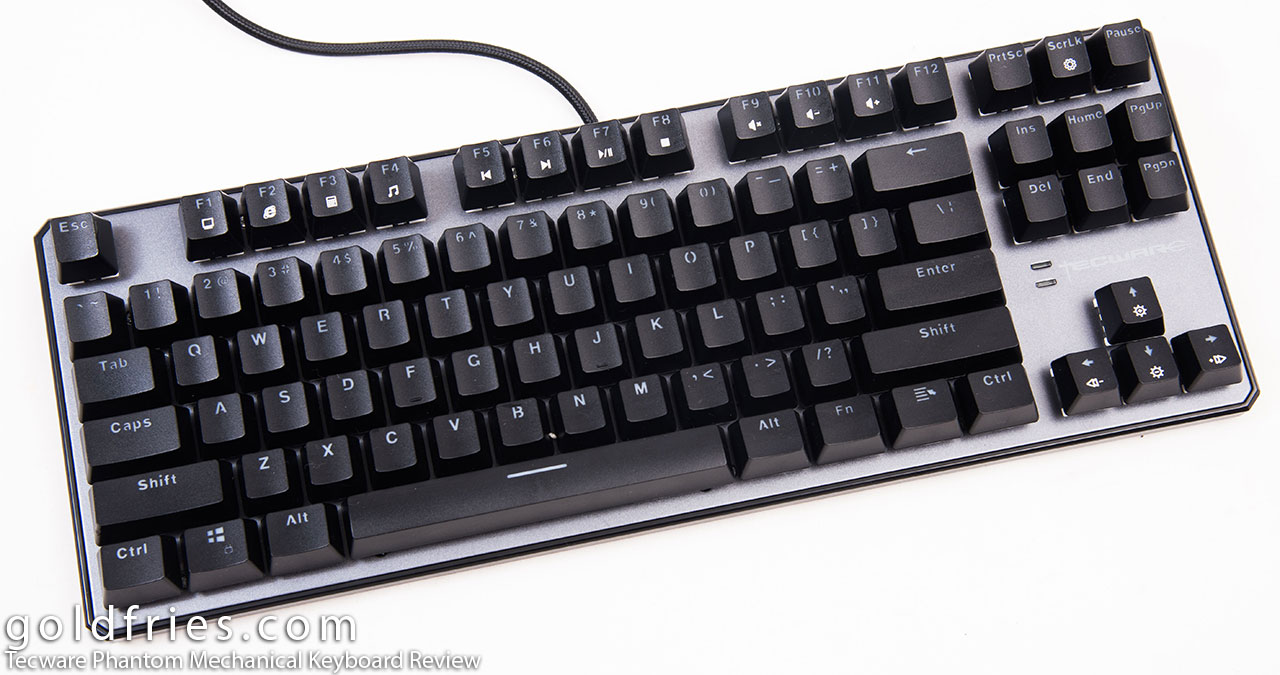 The Tecware Phantom uses Doubleshot ABS Keycaps and what I can tell you is that they feel solid, and that’s not just because of the caps but the overall mechanism itself which is down to the switch. Being Doubleshot ABS Keycaps, they have greater durability compared to the traditional laser etched translucent keycaps. 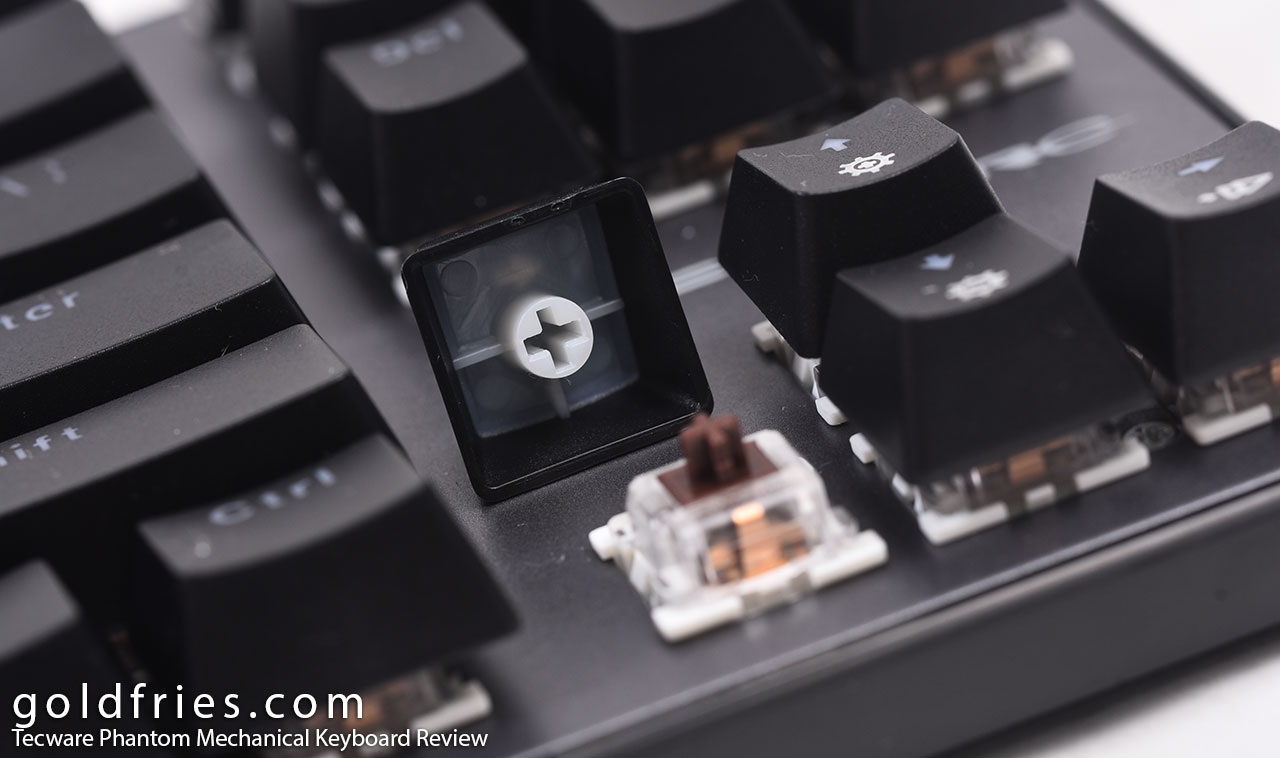 Speaking of switch, it uses Outemo switch and they are modular. Tecware included the switch removal clip with the Phantom mechanical keyboard which is a neat touch, with the modular nature of the switch Tecware uses SMD LED. This means the LED is on the PCB rather than on the switch itself. 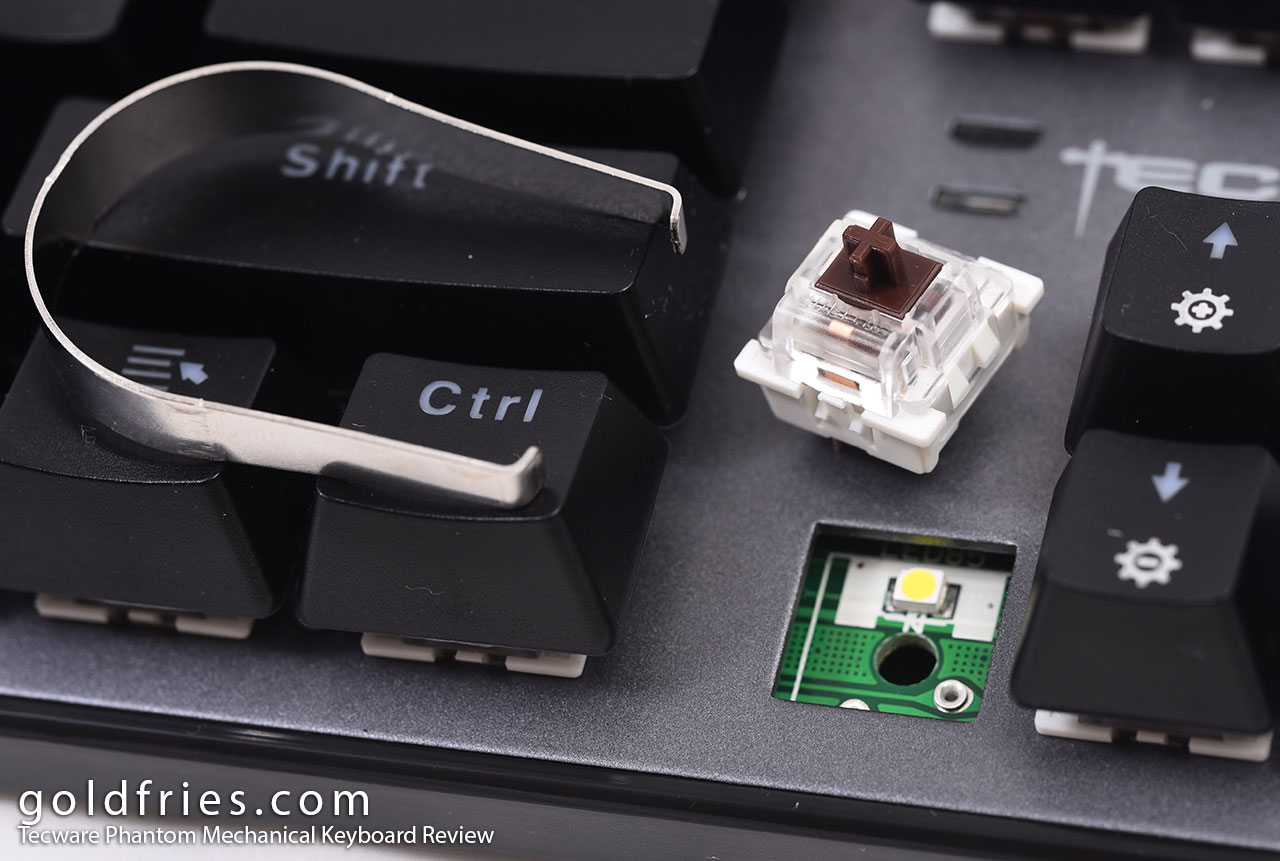 My only complaint which I think is petty, is about the color of the LED. I was expecting it to be white of which blue LED usually have a tint of blue but in this case it looks off-white.

It’s not a major issue but I hope Tecware will improve on this aspect, as for the output I’d say it’s great because the LED lights are diffused and it gives a gentle glow of which I found pleasing to my eyes.

I could set it to maximum brightness and have no issues with it, speaking of which it has 10 levels of brightness which I think is damn cool considering most brands only offer you like 4 or 5 and one of them is actually OFF.

The 10 levels of brightness is not inclusive of OFF, and that aside it has 10 modes and 8 speeds. You can check out the modes here. 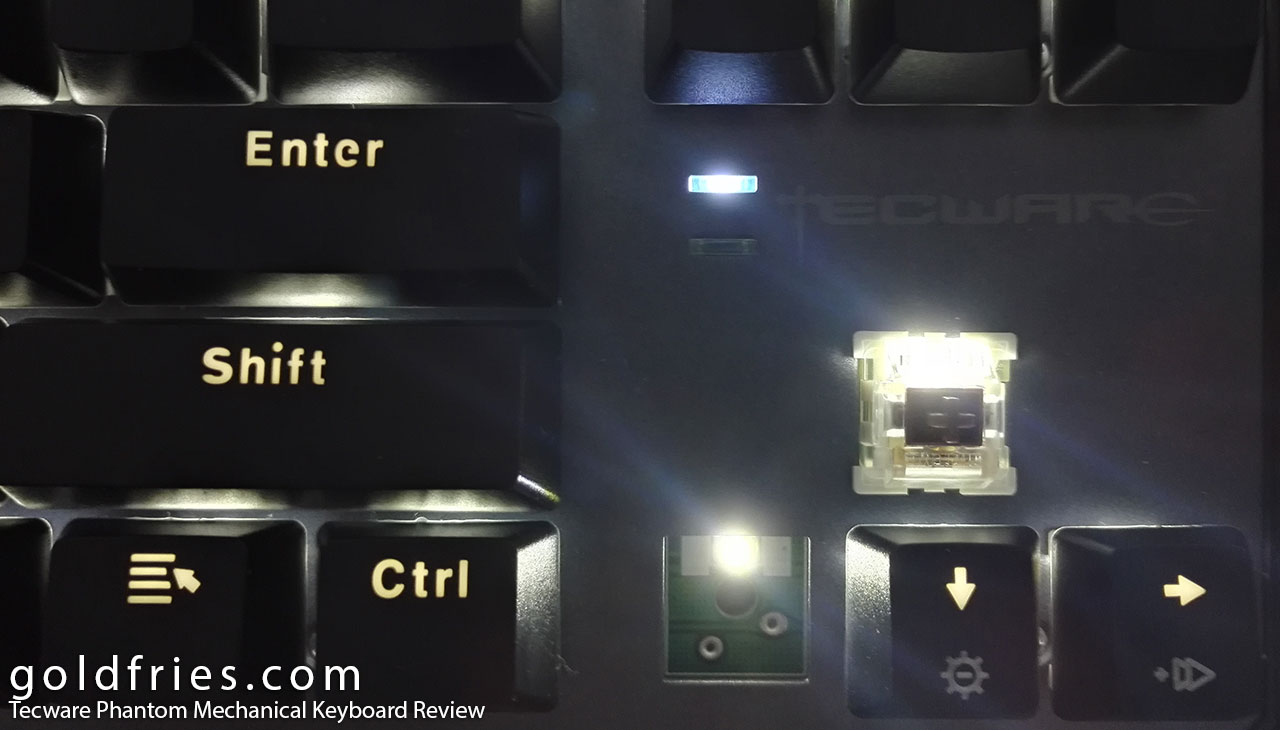 The Tecware Phantom comes with grooves at the bottom for cable management and generously sized rubber paddings, the unit also comes with the keycap removal clip and also a level of adjustment. 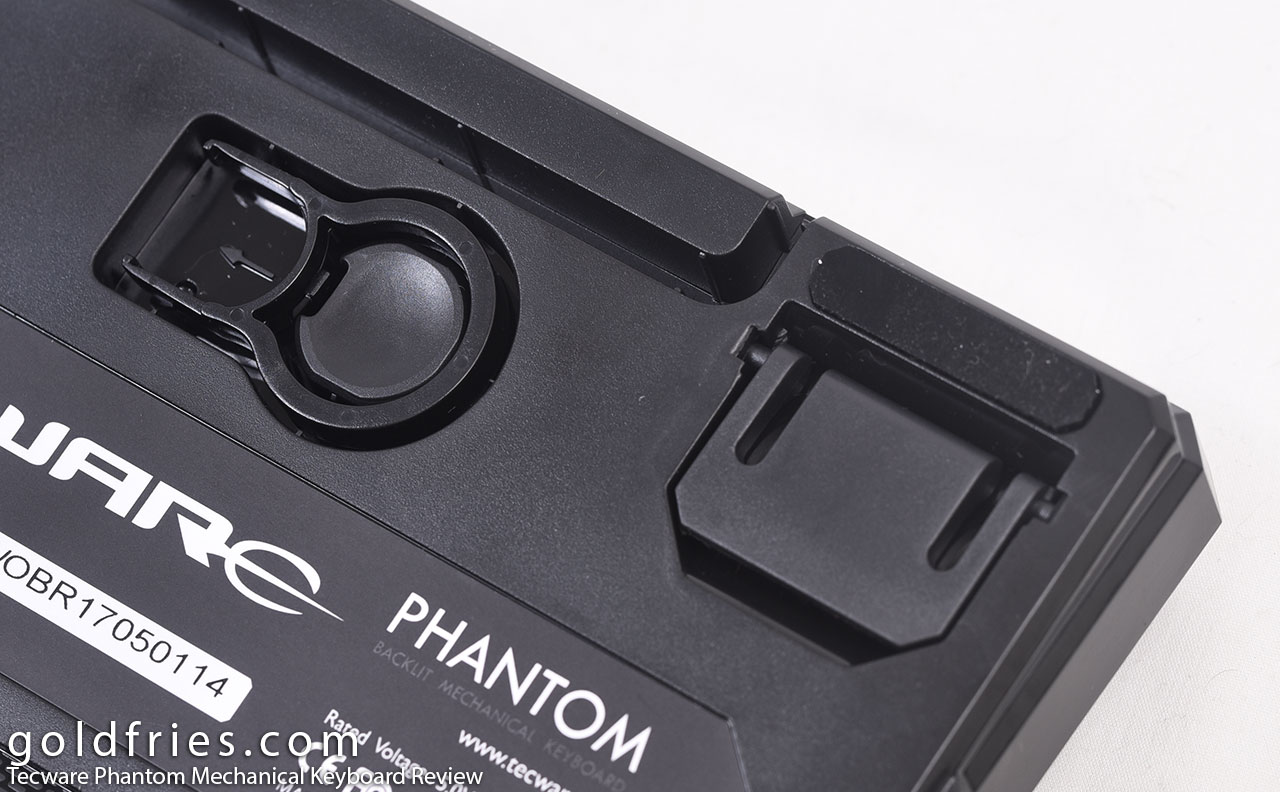 What I like is that the keyboard is slightly tilted as it is, there’s no need to use the additional level unless you really like the keyboard to be very much tilted. 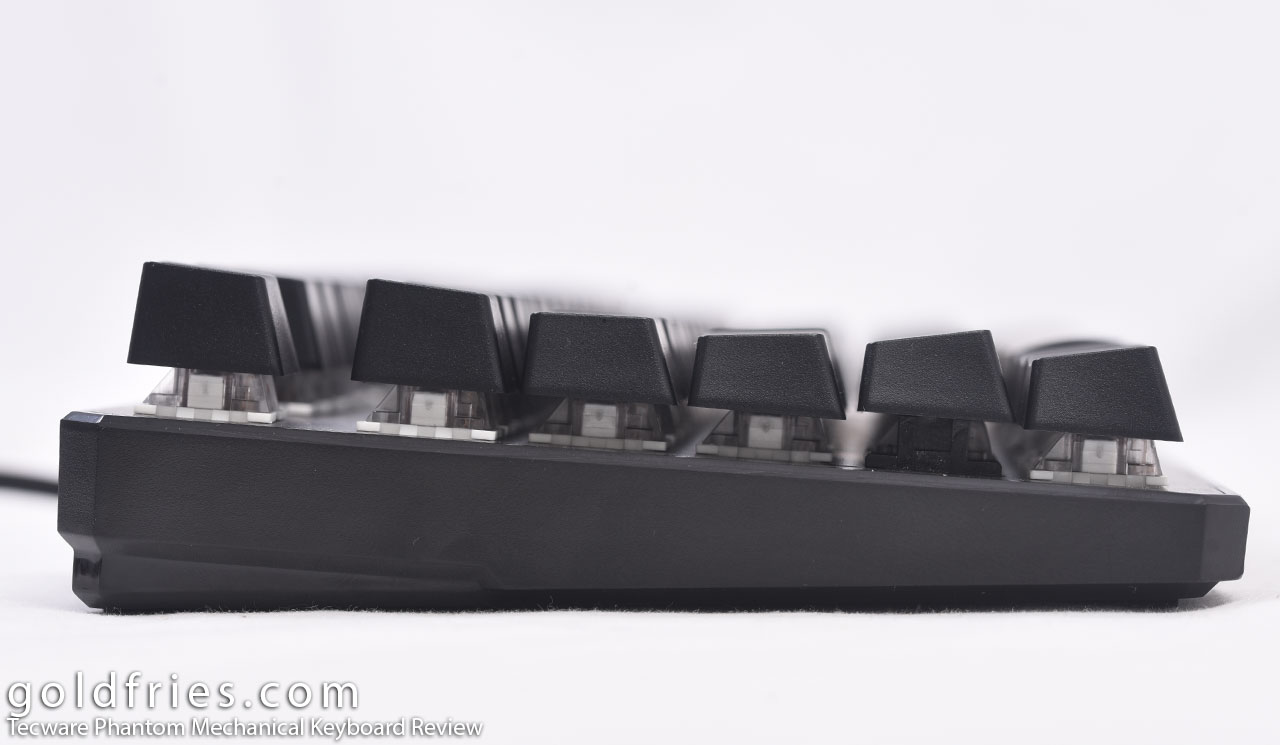 My experience with the keyboard is pleasant, I’ve tested both blue and brown version.

Comparing the Outemu brown switch to my Cherry MX brown switch, the key difference is that the bump is more prominent on the Outemu switch of which the Tecware Phantom uses.

As for the Outemu blue switch model, I find that it’s the most pleasant blue switch experience so far as the “click” sound of the switch is very much subdued, or perhaps dampened is the way to describe it. Bottomline is that the click doesn’t irk me as much as blue switches do, regardless of which maker whether it’s Cherry, Kailh or whatever unknown ones.

Below are the NKRO capture, I could get it up to 6 which is fine as I don’t press that many keys at once, however it’s far less simultaneous key press compared to my Ducky keyboard.

Here’s the maximum combo I can get after numerous tries to spam simultaneous presses.

The Tecware Phantom retails at just RM 139, I couldn’t ask for more out of a mechanical switch at that price and I find it A LOT better than many keyboards that are priced at RM 200 range.

This is probably one of the few keyboards that I feel good using right from the start, not forgetting that it has modular switches and uses SMD LED. Really, what else could you ask for?

Got you hooked? Check out the official product page of the Tecware Phantom.