Unlike other casings where the side panels are secured with thumbscrews, the Raven RV05’s side panel is secured by a latch that’s at the top side of the casing. 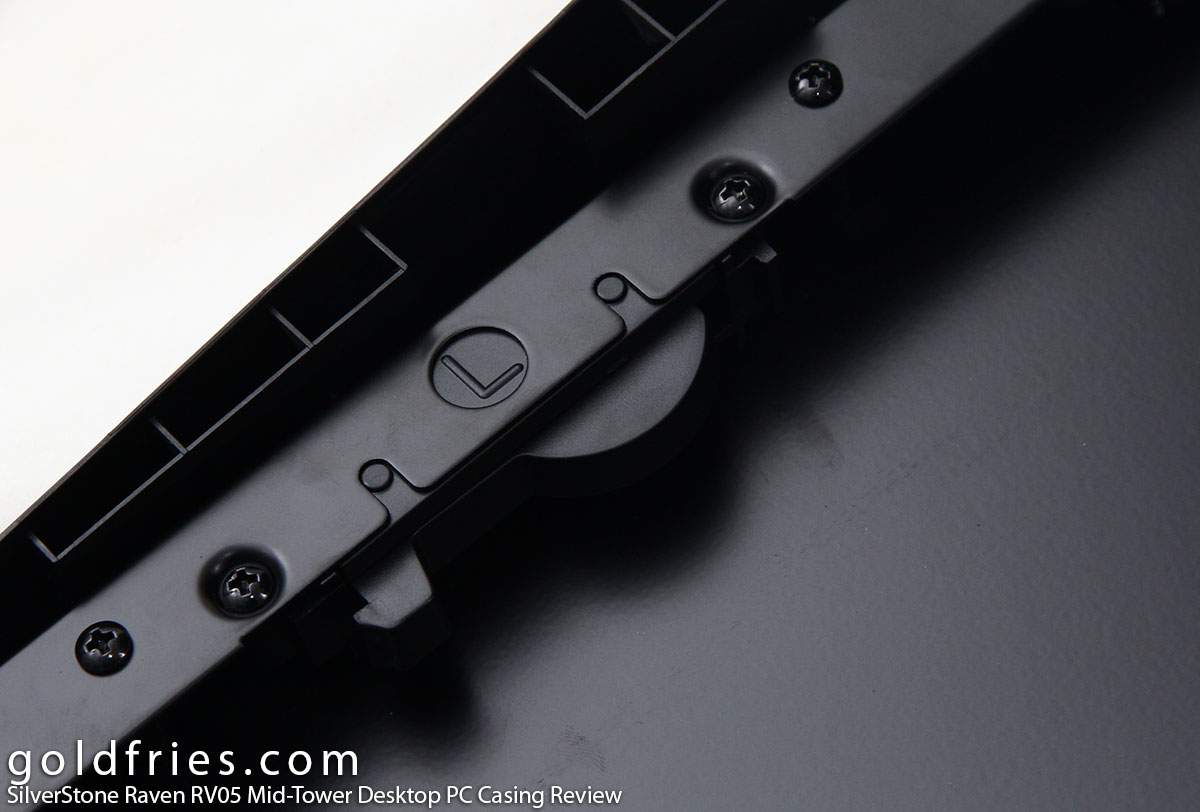 The side panel is light and solid but too bad the acrylic window is poorly secured, casings 1/3 the price come with better acrylic window mounting. The acrylic panel on the Raven RV05 is loose, and rattles even when moving the panel around for installation. Not a good thing.

At the bottom there the dust filter stretches from the front to the back, we’ll get into that in the next picture. Ahhh and so we’re now looking at what’s inside the Raven RV05 – 2 units of Air Penetrator 180mm placed right at the bottom, that covers a 180mm x 360mm area, and these fans are very strong and that explains why they placed a huge dust filter at the bottom. What I like about these Air Penetrator units is that they’re silent despite the air flow capacity. During the course of installation I was also grumbling away on why the front panel is just a flat piece of metal and it’s extremely cramped too! Not only was it difficult to get items into place like say placing screws on motherboard or installing large heatsinks, and how there’s lack of areas to install fans and all………… BUT WAIT, there’s a reason behind it.

Once I realized the beauty of the design, I understood clearly why it had to be this way. I was also dead annoyed by the lack of cable management area at the back. 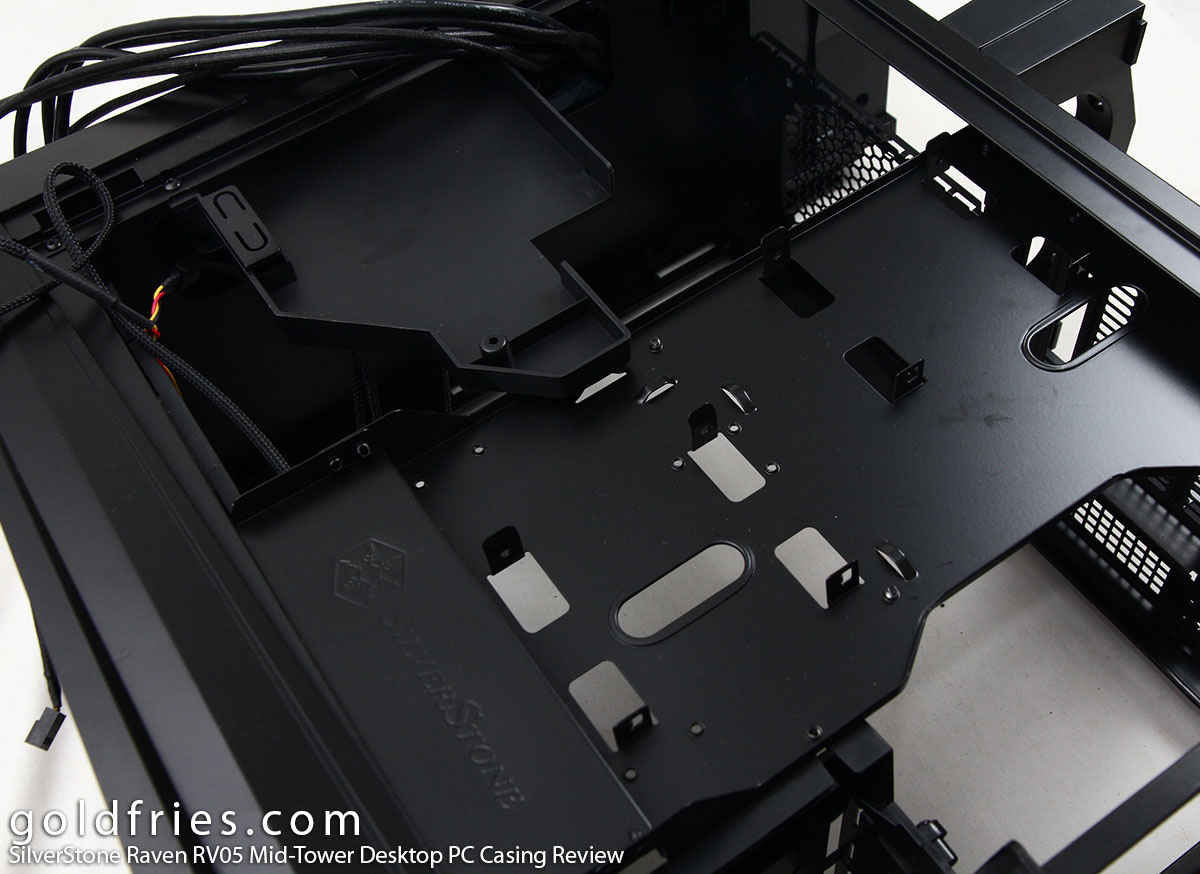 Now back to explaining the design – the Raven RV05 is cramped for a reason – AIR FLOW! That’s it and that’s all there is to it. By having a small enclosure that almost matches the 180 x 360 area that’s covered by the Air Penetrator fans, the airflow is optimized as turbulence is reduced. The heat from the PSU will not reach the graphic card and the heat from the graphic card will not reach the CPU cooler. Cool air is pushed from the bottom of the casing and is exhausted through the top, no ventilation grill at the side to maintain positive airflow so dust collection is minimized.

For comparison, I compared the Raven RV05 to the Corsair Graphite 230T. The Graphite 230T has 2x 120mm fan at the front and I used the Cooler Master JetFlo 120mm as the exhaust at the rear and set all fans to run at maximum speed.

The Corsair Graphite 230T setup serves as the unit that represents conventional setup, and for the components I had the DeepCool Gamer Storm Lucifer running on fanless to cool an Intel Core i5-4670K running a video encoding test.

I used the exact same setup on the Raven RV05 and the results were impressive.

Same load, same settings, same test and same environment, the Raven RV05 proved to be a casing that optimizes casing airflow. There’s no graphic card in this setup, if there were any then I think the gap would be widened.

Another great thing about the 90 degree change in component orientation is that your graphic cards, especially those with heavy heatsinks, are not susceptible to bending caused by the weight and also the pressure from PCI-E power cables’ pull.

Check out the Silvertone Raven RV05 at the official product page.

The SilverStone Raven RV05 retails at RM 459, it’s a great casing when it comes to cooling. The casing doesn’t work well with non-modular power supply units due to the lack of space and setting up a neat system could prove to be mentally and physically tiring due to the challenges.

For all the effort place, your reward would be a casing that cools more efficiently that almost any other casing in the market . The space at the bottom is large enough for you to mount 360mm radiators BUT I do feel that it’s quite a waste, especially considering the performance of the 2 units of Air Penetrator fan. 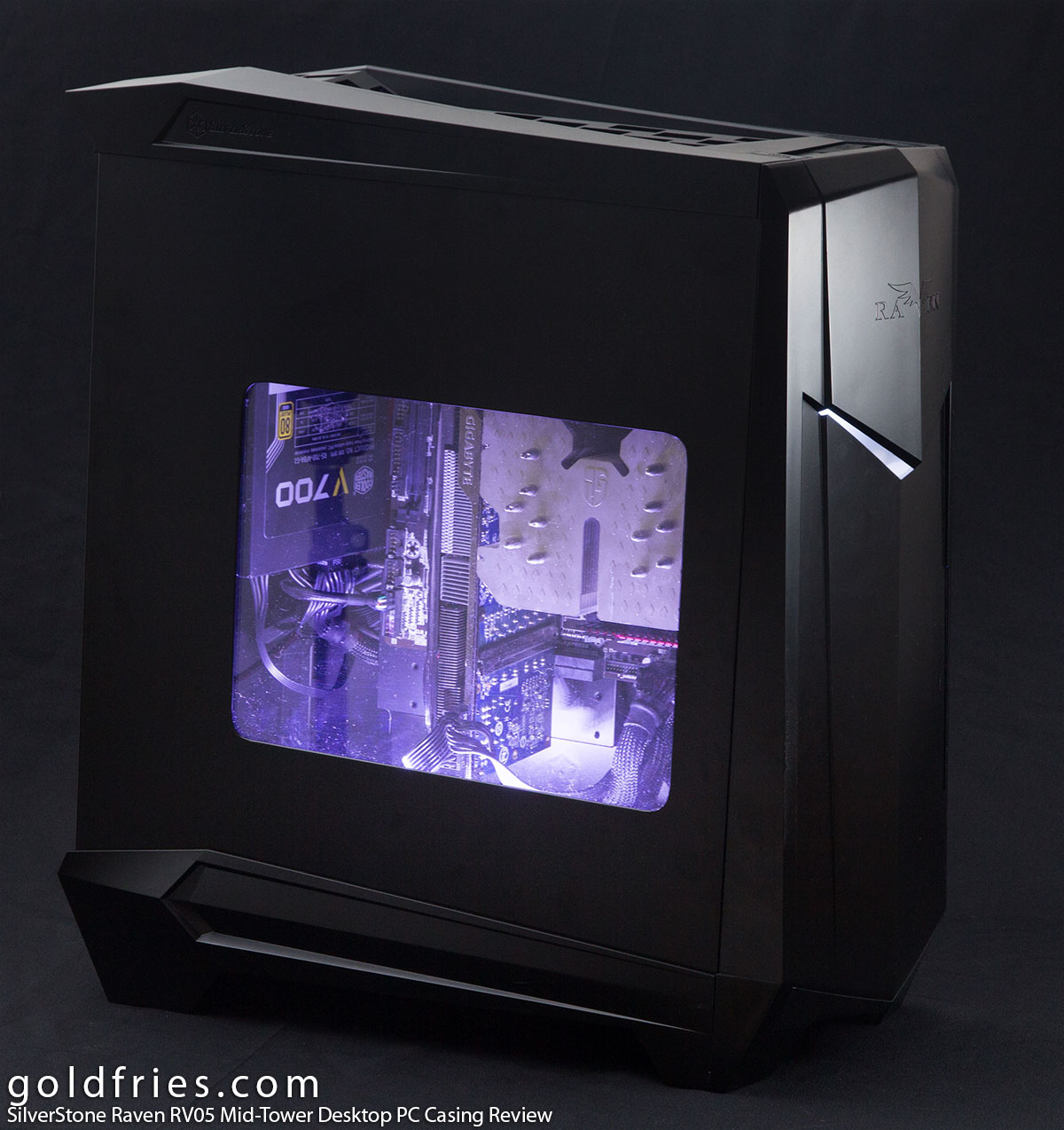