If you need a keyboard that can double as a kitchen knife of some sort then this is it, the Rapoo E9270P is unbelievably slim and it looks great! 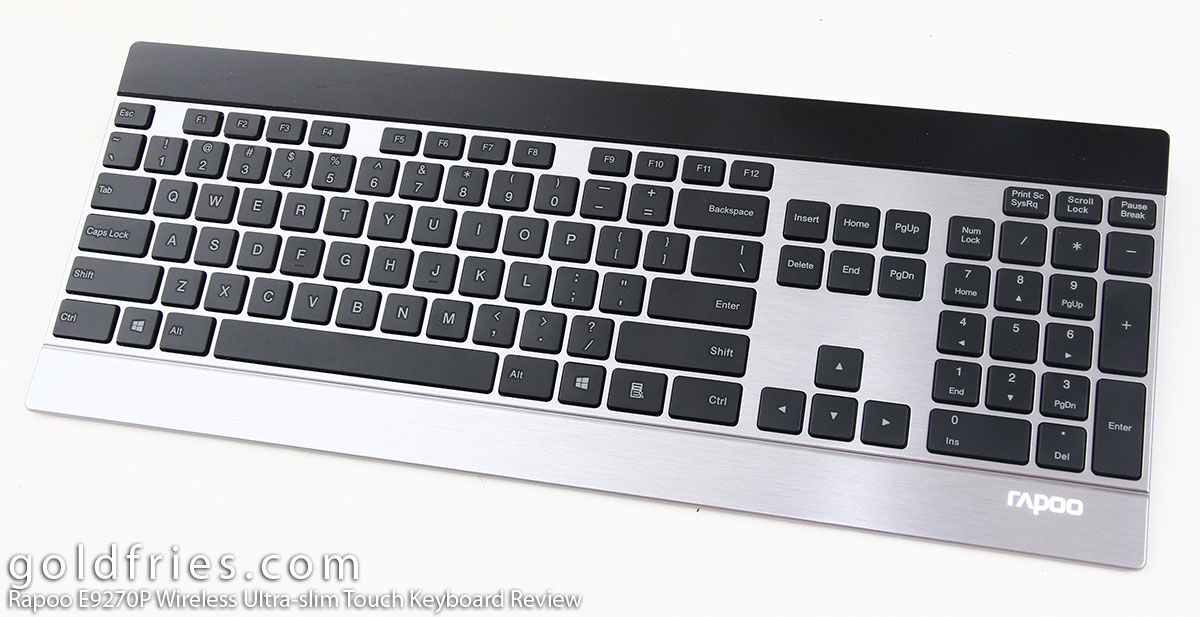 The Rapoo E9270P slim on both the frame and the keys itself. 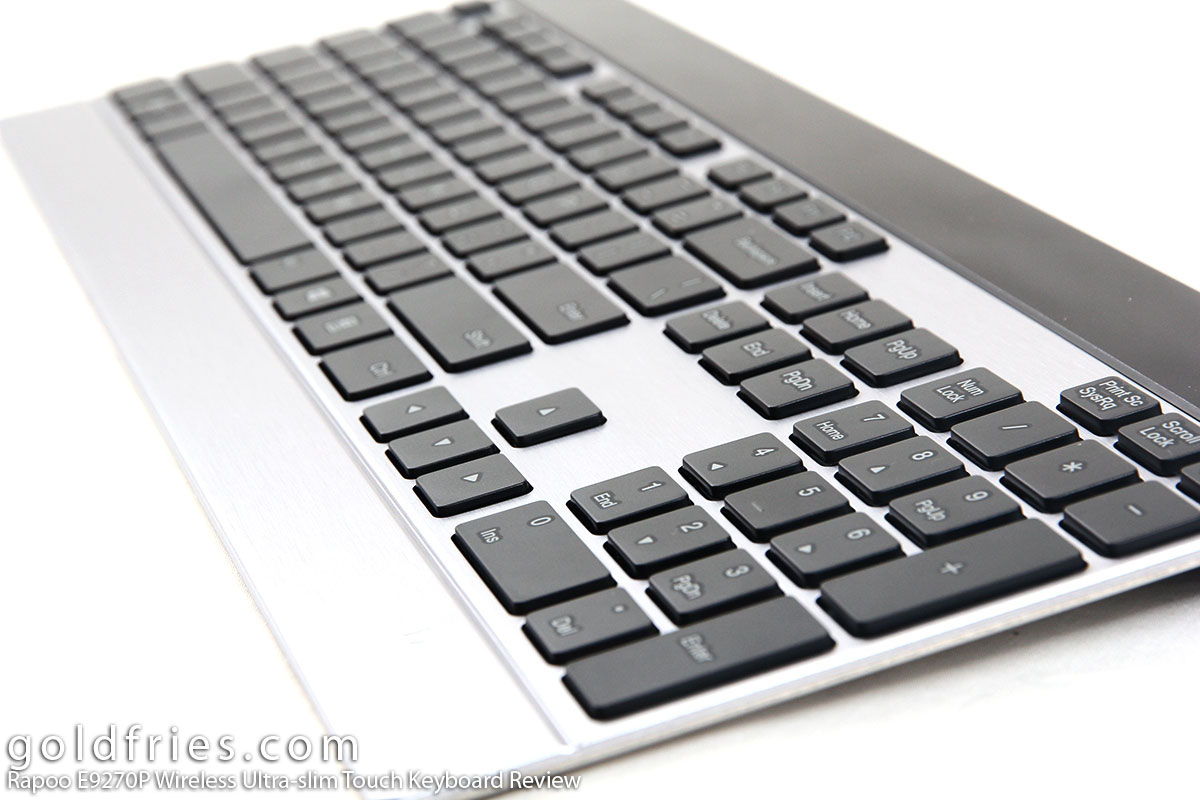 Just how slim is the Rapoo E9270P? Here’s a comparison with a DDR3 RAM, an SD Card and a HTC One Smartphone. 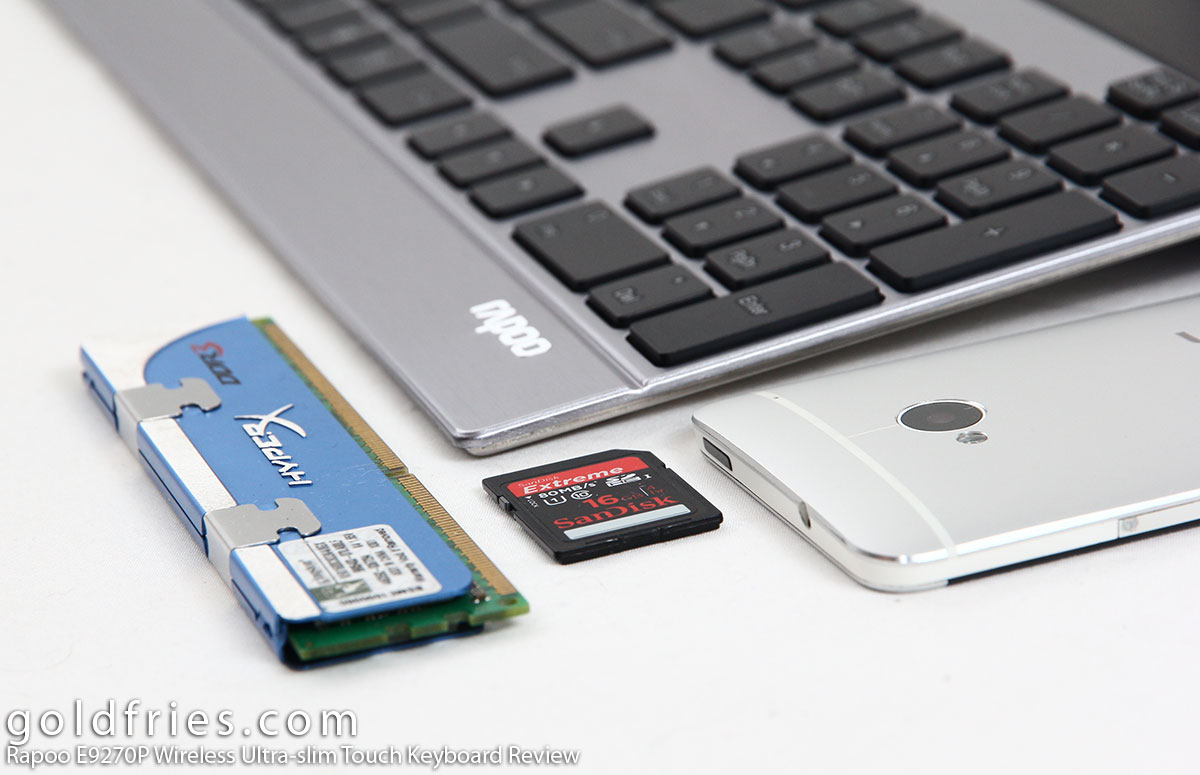 The bottom of the keyboard is just as glossy as the front, with the brushed metal finish. 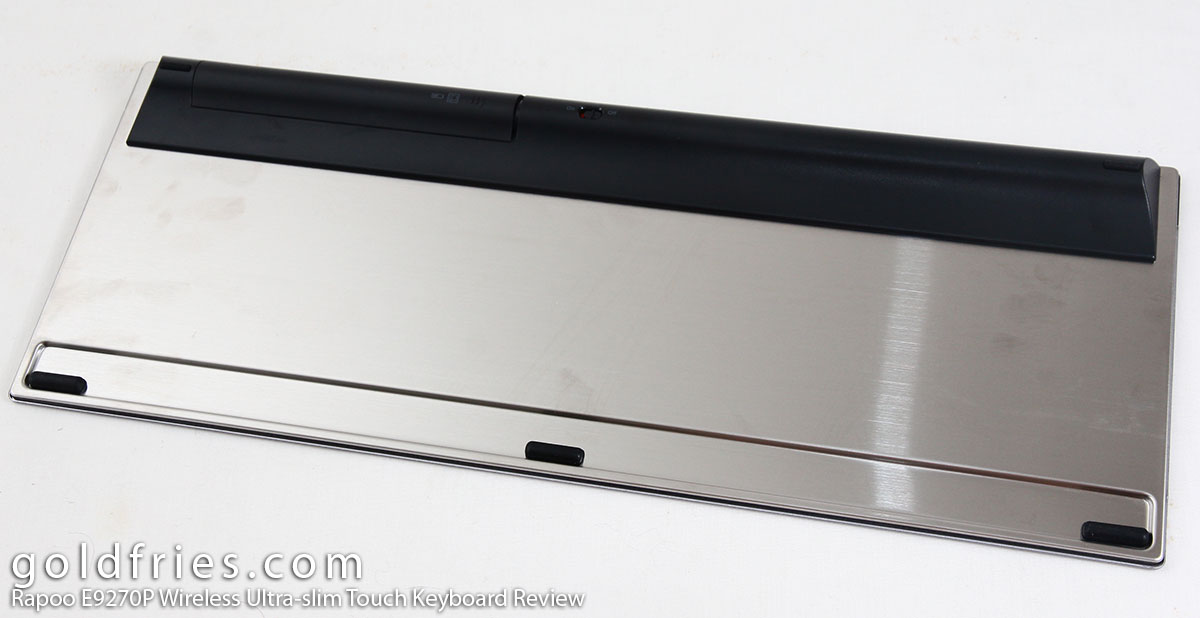 There’s no option for changing tilt angle, the height is fixed based on the compartment that stores 2x AA batteries. 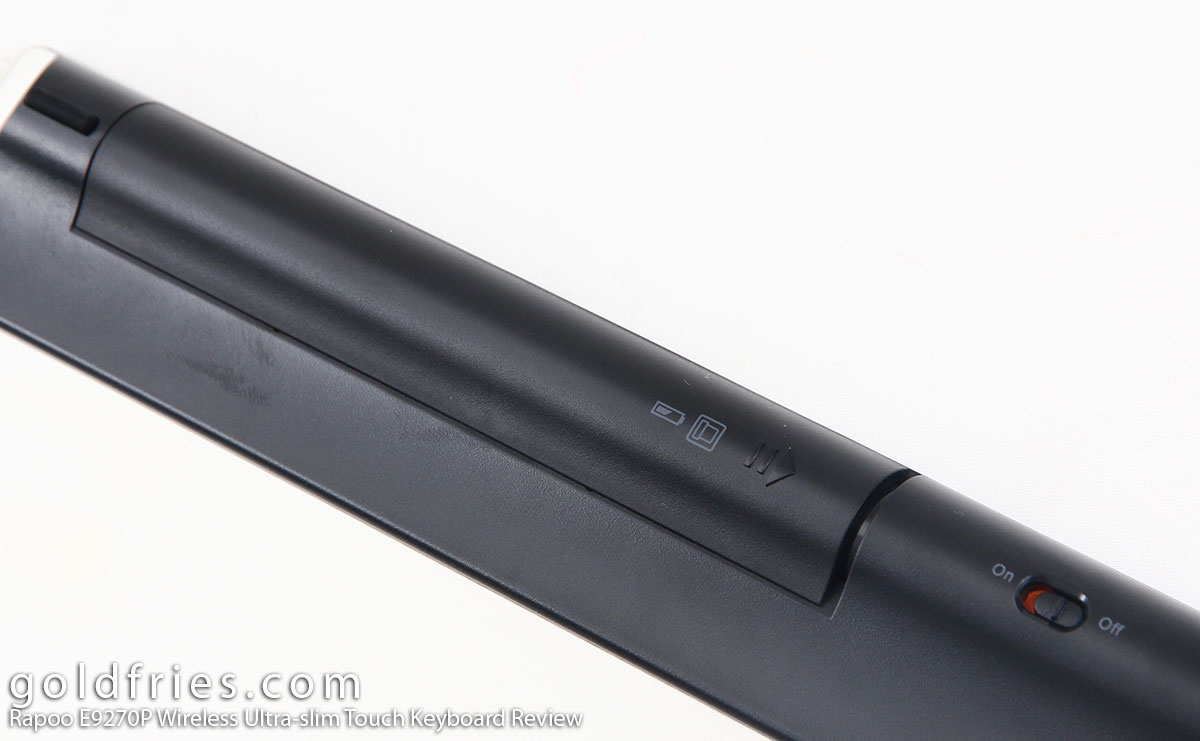 The USB wireless receiver unit is exactly the same as the one on the 7800P Wireless Mouse so having them together can be confusing. 🙂 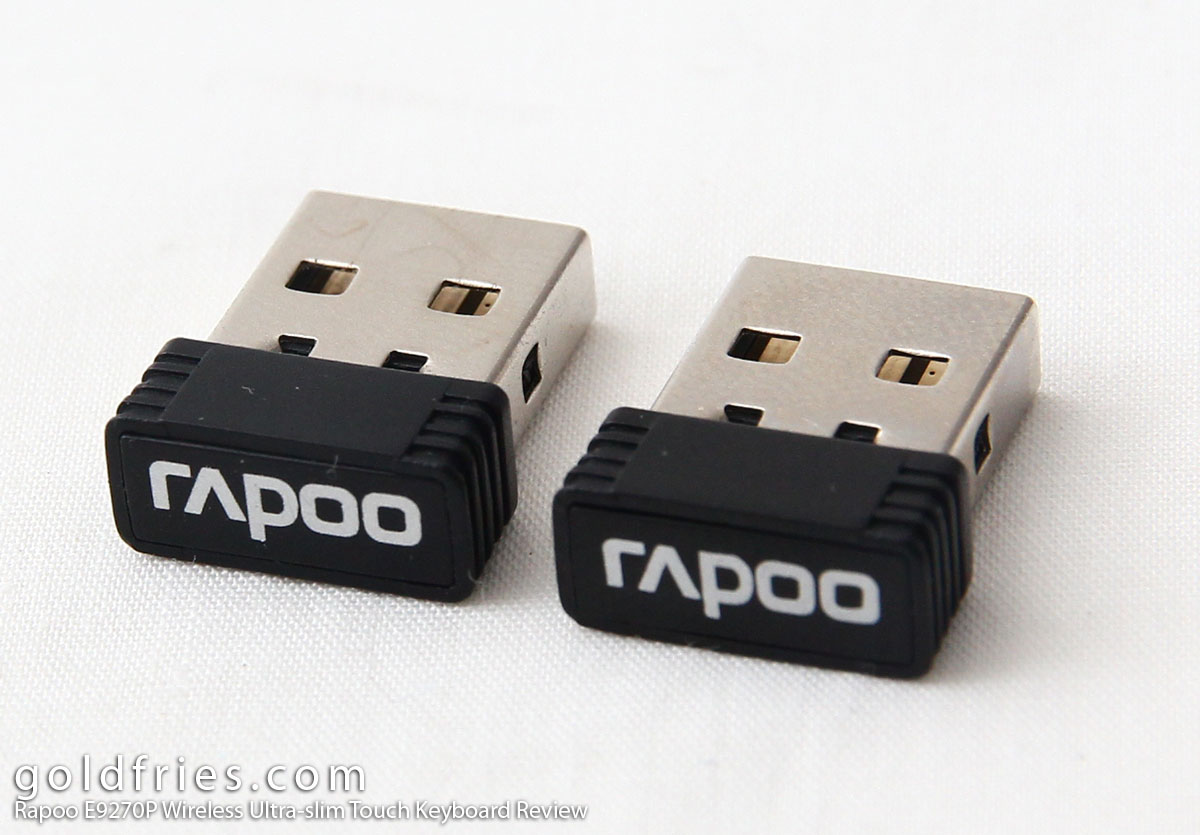 The Rapoo E9270P also has touch activated multi-media controls that lights up when your finger approaches it. 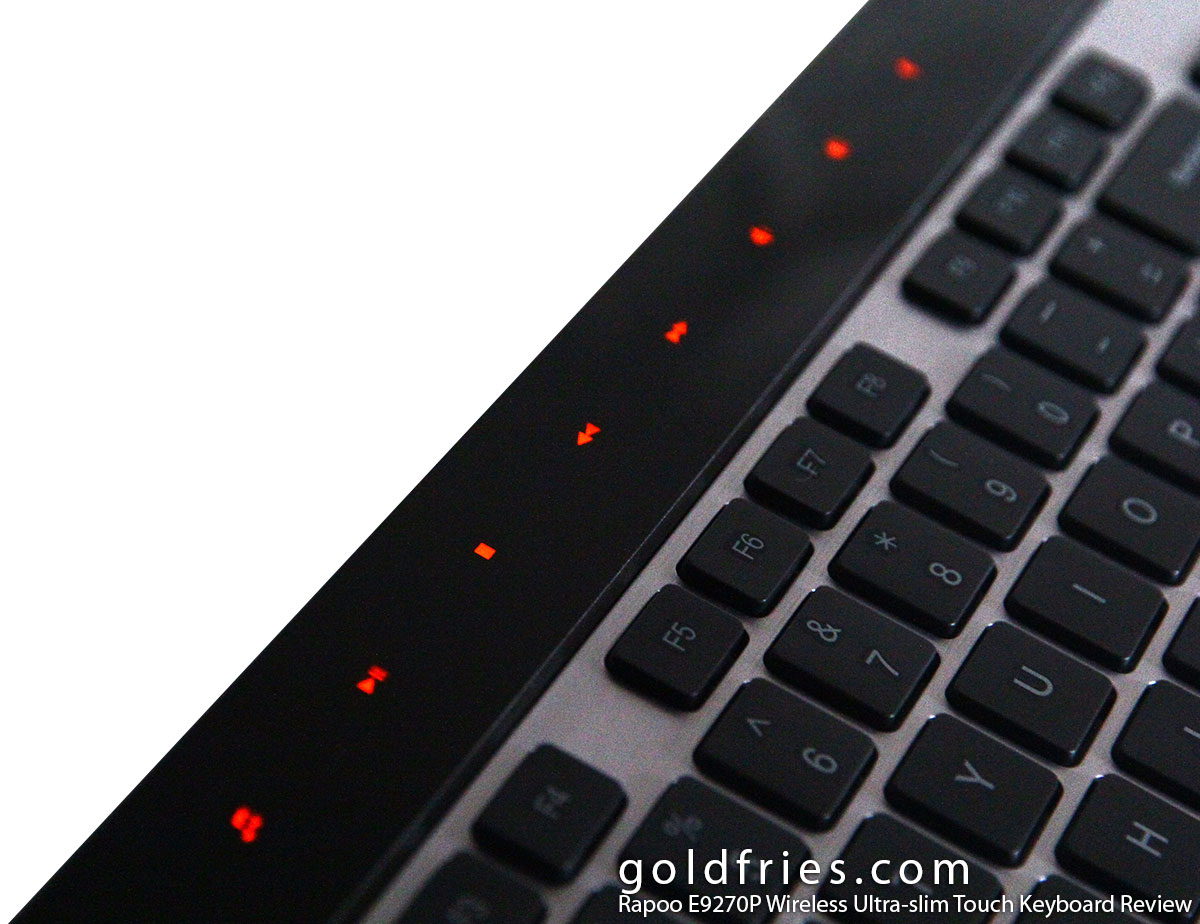 I’ve never used a slim keyboard as such so it took me a while to get used to it. Build-wise the keyboard is rock solid and the keys are comfortable to touch. The Rapoo E9270P is clearly an Apple Keyboard alternative. The Rapoo E9270P worked on Windows 7 without any drivers installed but I have not tested it on Mac OS.

The E9270P keyboard worked with the 7800P mouse just fine, there were no conflict in signals despite both running on wireless. I played StarCraft II with both Rapoo’s wireless products and had no issues whatsoever.

I wasn’t aware of the multi-media function keys until I happen to touch the black surface. 😛 The concept is good but I think it’s quite a waste of time to wait for it to lit before knowing where to press. Another down side is that the keyboard lacks the option to adjust its tilt.

The Rapoo E9270P Wireless Ultra-slim Touch Keyboard retails at RM 119, certainly a very competitive price for a wireless keyboard that not only looks good but works well and comfortable to use. Certainly worth your money when it comes to appearance and being wireless.