The 1st non-reference Fermi product in the world with Blue LED user serviceable fan? It’s from Galaxy and it’s with us today.

Firstly I would like to apologize to Galaxy and my dear readers for delayed publication of this article (btw, Happy Birthday to goldfries.com! …… well it was 31st May actually. Entering the 4th year of publication!

Now, back to the card.

Those are the key features of the Galaxy GeForce GTX 470 GC.

As you can see it’s not using the reference heatsink. 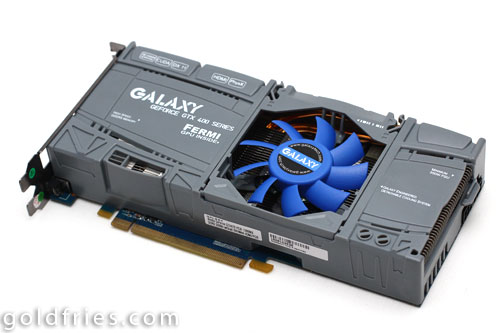 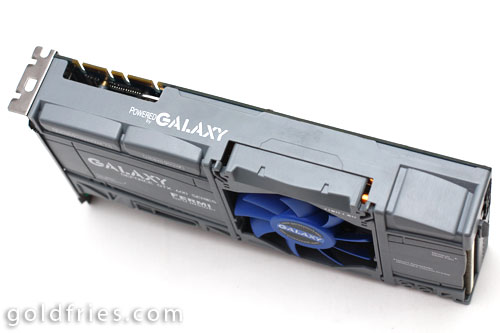 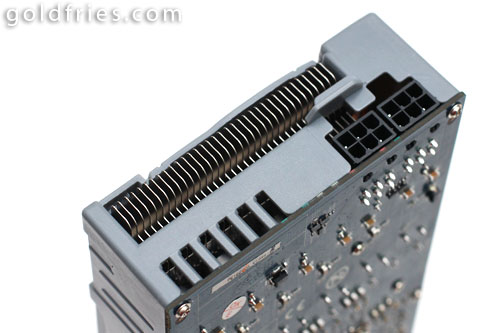 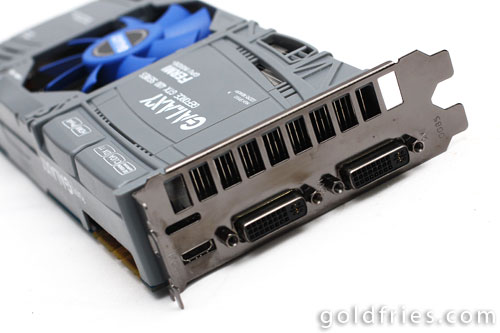 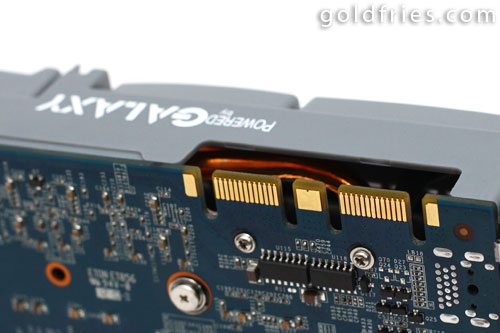 Here’s the interesting bit – the Blue LED user serviceable fan. The word “BLUE LED” always lead me to think of transparent fan blades but this card uses Galaxy’s signature blue fan but with LEDs in the enclosure.

The reference cooler gives a rather plastic toy feel, the clips were steady but not exactly easy to pry. It’s not difficult, just that it’s very secure thus you may need to use more than 1 hand to open, rather than just the thumb and index finger. 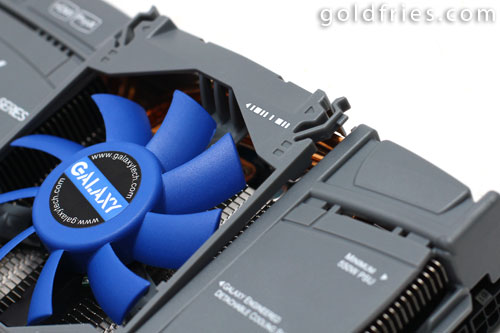 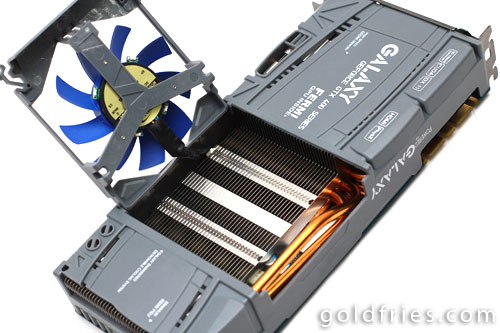 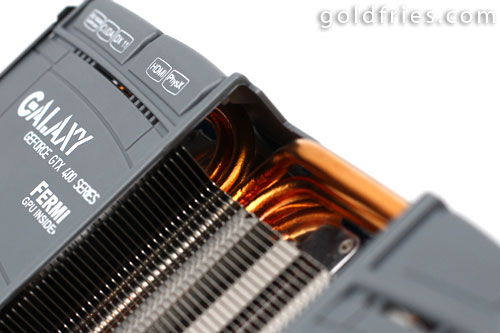 The fan is silent in general but once it’s on full load – it’s still audible but definitely much more quiet than reference fans.

While the Galaxy unit is overclock, any experienced graphic card overclocker can tell you that 25Mhz boost for core and 35Mhz boost on shader speed isn’t going to yield a significant boost in framerate. Based on my experience, you’ll probably get a frame or 2 out of it.

GTX 470 : Expect a GPU score of ~14.000 points, and depending on your system specifications roughly 15.500 points for the overall P score if you are on a fast Core i7 platform.

*Note : I’ve upgraded to Furmark 1.8.2 and have added 3DMark Vantage (and soon, the new 3DMark), Battlefield : Bad Company 2, and also Unigine Heaven 2.0 to the benchmark. Future reviews will include these.

Stunning figures but the results turned out to be lower by a frame or so. 🙁 On a conservative overclock to 675Mhz Core | 860 (1720Mhz DDR) Memory | 1350Mhz Shader, the improvements are less than a frame. Processor bottleneck? I don’t think so either as I’ve even added another 100Mhz to the processor, making it 3.7ghz already and if it was a processor matter then we would’ve seen quite some gains.

A little more details on the maximum power consumption of the GTX 470 based cards.

Just to add – and AMD Athlon II X3 425 is not suffiicent for the GTX 470! Initially the tests were done with the X3 425 and it looked ok but overclocking it to 3.6Ghz shows significant improvement in the results.

The Galaxy GeForce GTX 470 GC is on my rig running full load 24/7 for [email protected] and I get like 12.5k points per day (PPD) based on FahMon reports. To my last observation, the card didn’t even go beyond 95Â°C even when I left the it to fold through the day without air conditioning.

If you bring ATI cards into comparison, then clearly any nVidia card out there would prove to provide less value for money. For a person who does [email protected] like myself, the nVidia cards are a better option. 😀