Quickfire TK another one of Cooler Master CM Storm mechanical keyboards released much earlier this year.

The Quickfire TK very much resembles the Rapid-I in both layout and size but TK comes with Tenkey in the layout, which probably explains the TK in the name.

The TK is merged with the arrow keys and the other functions keys, making it many ways a more versatile keyboard than the Rapid-I.

The TK is a much more simple keyboard compared to the Rapid-I as well, it has 3 lighting modes and 5 brightness level but it does not come with customizable lighting behavior and memory profile as the Rapid-I. 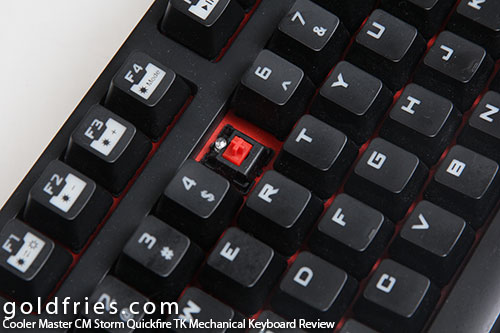 The red colored TK as seen in this article comes with Cherry MX red switches. The ones with blue switch will be in blue LED while the brown switch variant will be of white LED.

Both keyboards are great but which one is better? Personally I’ll go with the TK for the lower cost and better functionality. Both doesn’t have Macro keys anyway, lighting behavior doesn’t work for me because I don’t look at my keyboard when gaming nor typing but the Tenkey being available does make it a lot easier to work with.