The UX305 is ASUS’ latest offering in their Zenbook range of Ultrabook, one that is of a very slim form factor that quite resembles that of the Apple Macbook 2015. The UX305 carries the signature silver circular brushed metal finish that’s the common trait of ASUS’ Zenbook product line-up. 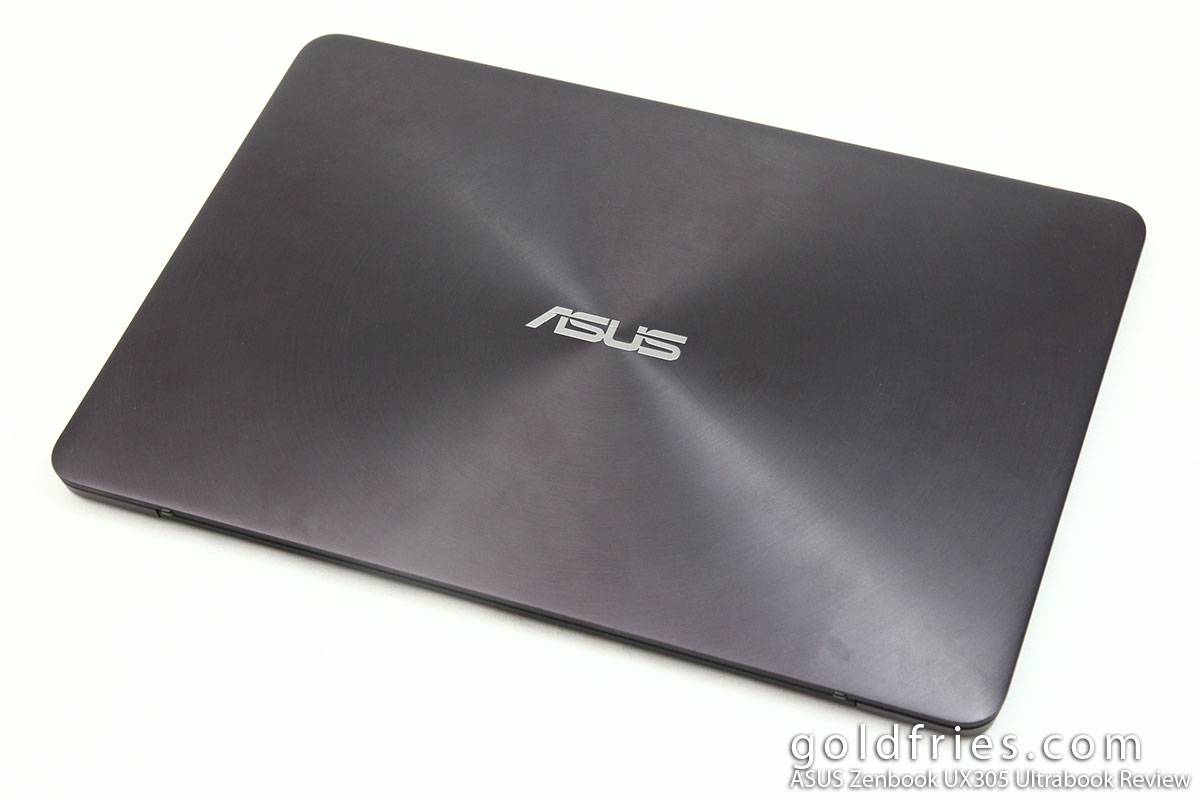 The UX305 is one beautiful device, right out of the box what caught my attention was not only the slim profile but the weight of it. 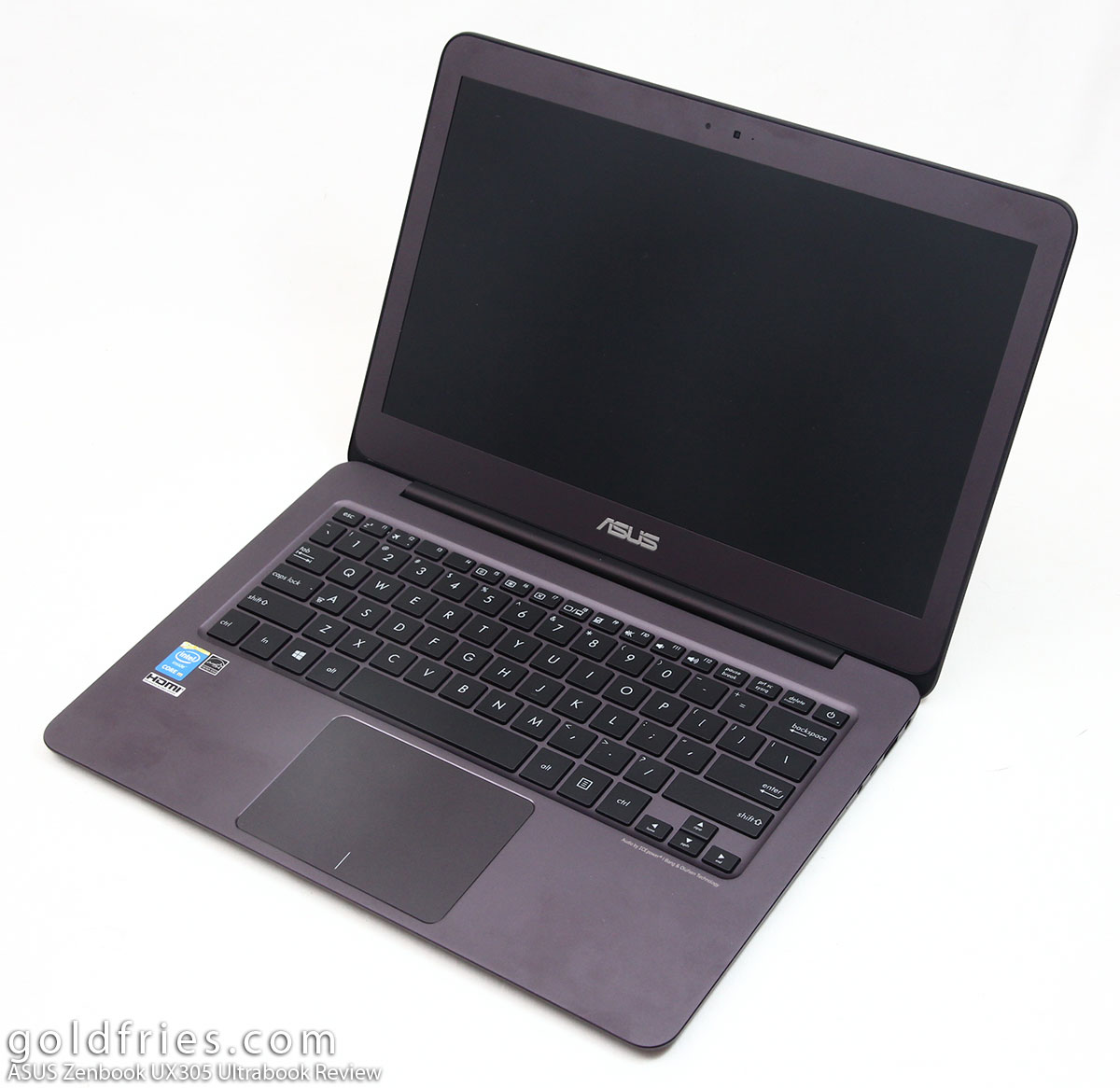 Now before we proceed with the rest of the review, let’s have a look at the specs as taken from the official product page. 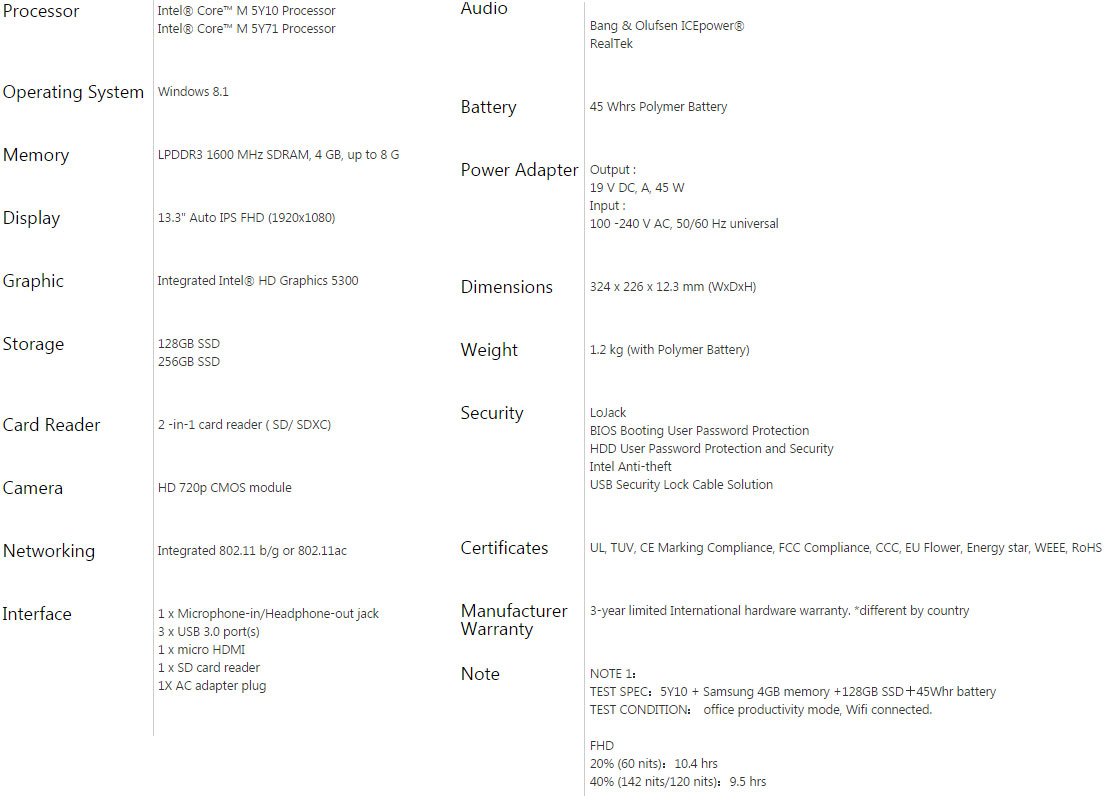 Specs-wise the UX305 is pretty decent, there’s no particular strong point other than the Full HD IPS screen but considering the form factor I think it’s a great trade-off.

Starting off, the UX305 has a full-sized keyboard that’s comfortable to the touch and the trackpad is of quite a generous size as well. 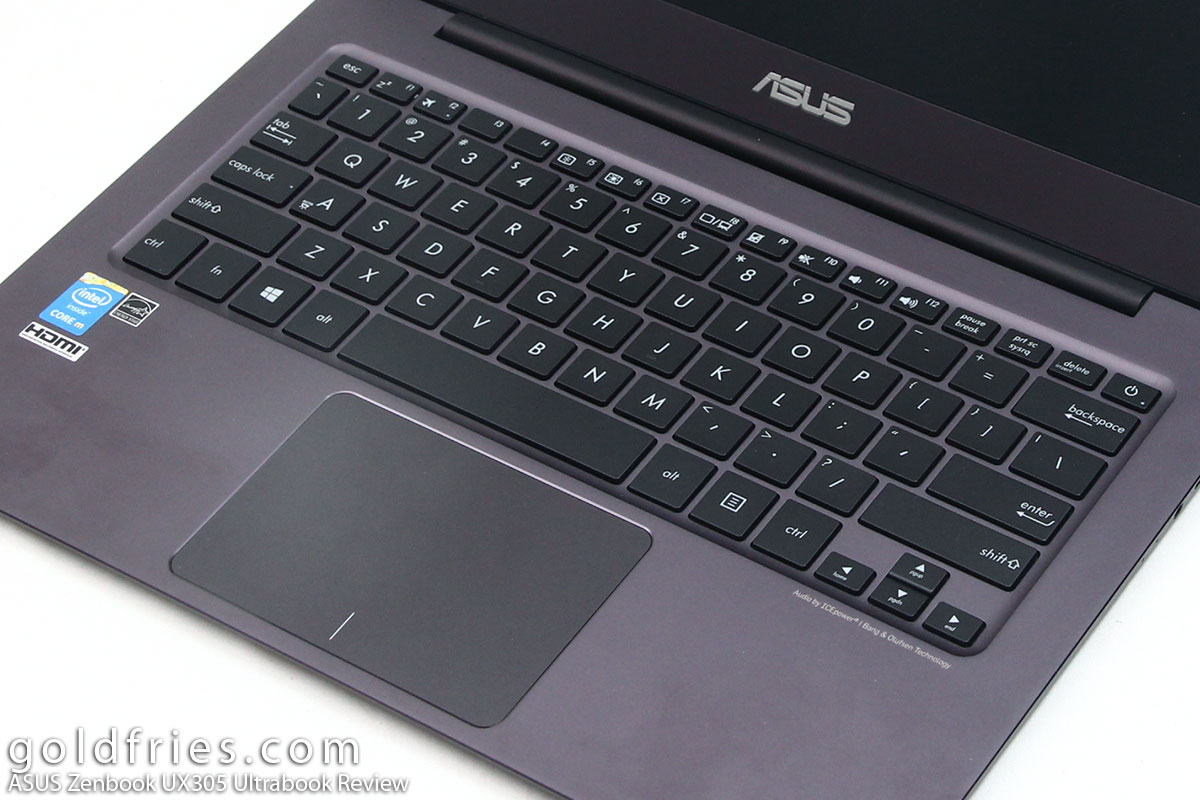 The only thing I didn’t like about the keyboard is that the power button is on the upper right corner, a horrible location in my opinion as one tends to reach to the upper corner for backspace or delete button and this could cause unwanted direction of operation. 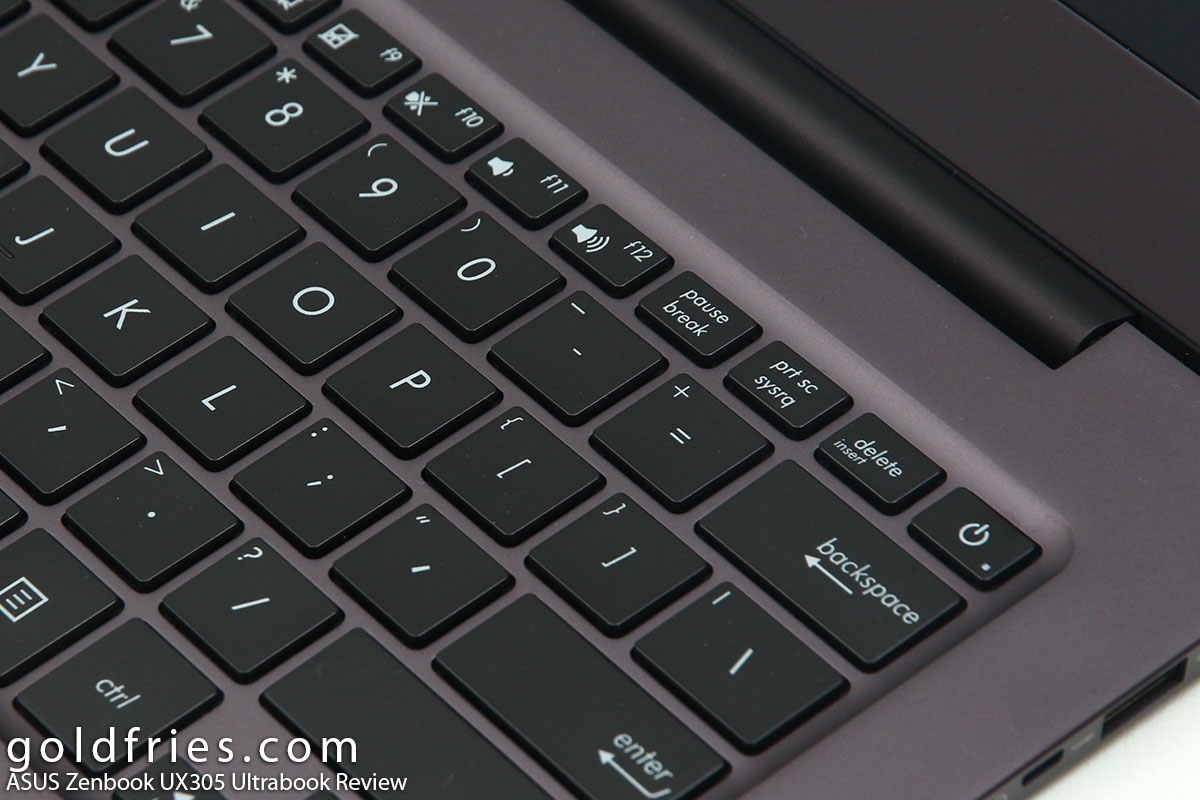 The USB ports and SD Card slot are at on the left. On the right, there’s the audio port, Micro HDMI, USB port and AC Adapter socket. What’s neat about the UX305 is that there are 3 USB ports, and all 3 of them are USB 3.0. Sure beats buying an adapter just to have get a few USB devices connected. 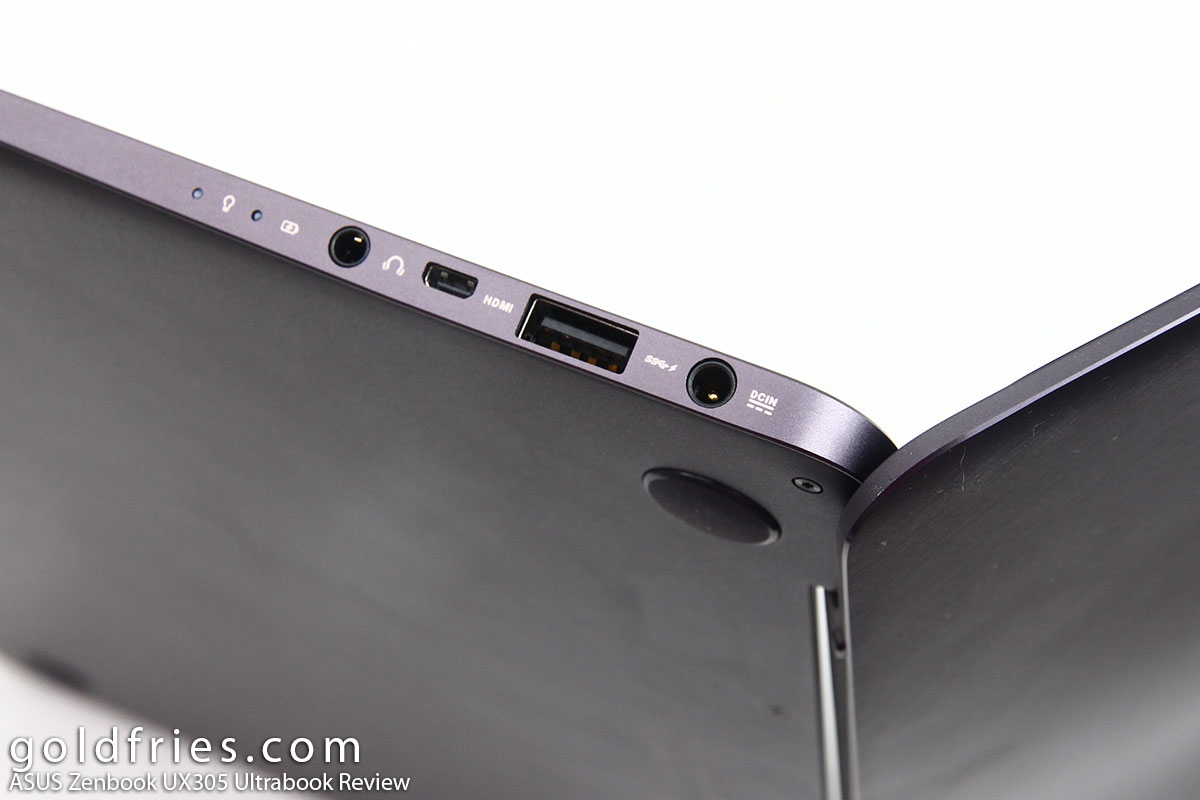 The UX305’s speakers are placed at the bottom, towards the sides. The rubber feet area of pretty good size, made with the intention to provide the UX305 a sturdy grip. I’ll talk about this a bit later in the article. 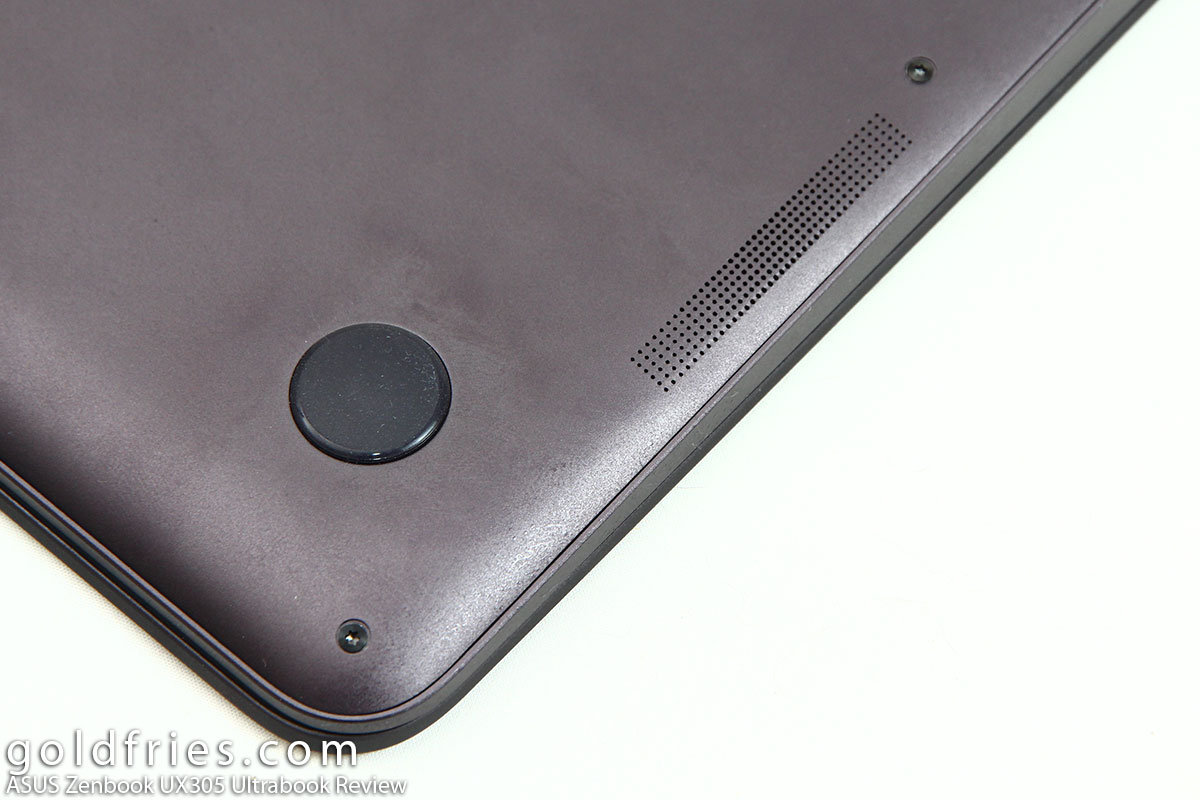 As to those who wonder just how thin is the UX305, here’s how it compares to a LEGO figure. 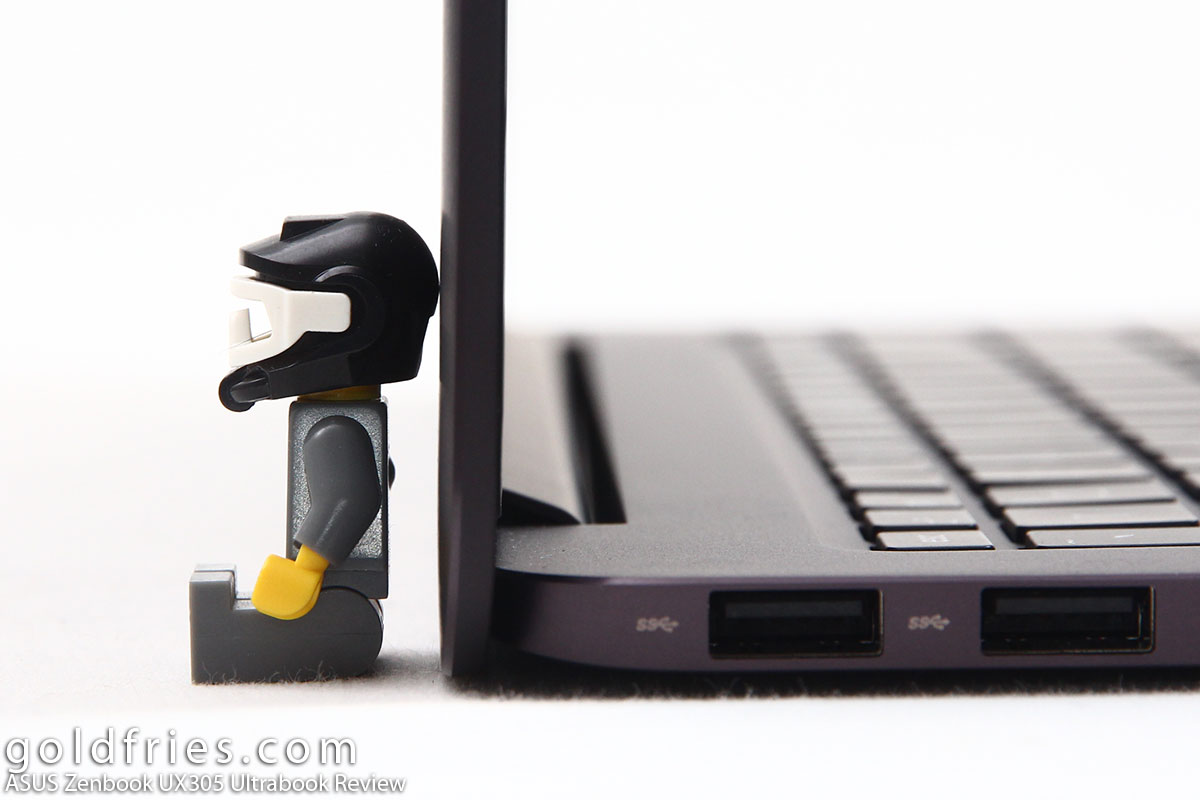 The UX305 is a great companion for one who’s always on the go and doesn’t wish to carry a back-breaking mobile computer.

The UX305 works great and the battery life lasts about 4 hours according to Windows but bear in mind that 4 hours is continuous usage but in my experience I’ve been through a full day without having the device run low on battery.

Design wise the product has 2 major flaws. The first one being the placement of power button while the second flaw is the hinge that’s on the display panel. Here’s how it looks like when the UX305 is wide-open. 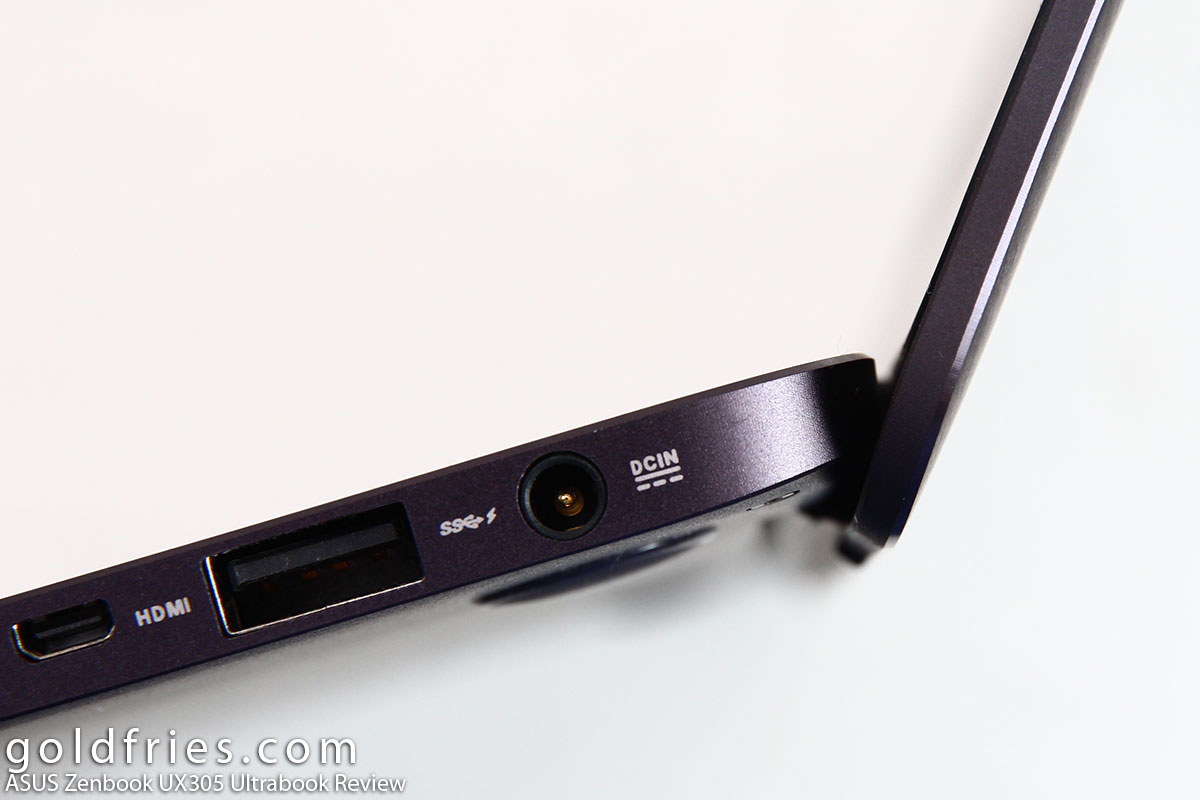 When the panel is open, the UX305’s base is raised by thus defeating the purpose of the rubber feet at the rear.

The device does heat up a fair bit but the heat is not something uncomfortable.

As for the audio department the UX305 is not impressive, often sounded like it’s using some cheap speakers despite bearing the Bang & Olufsen ICEpowerÂ® name.

For those interested in the more technical aspects of the UX305, here’s the CPU-Z and GPU-Z detail. 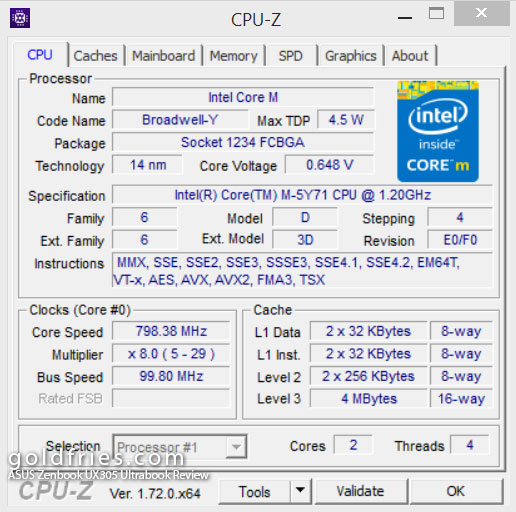 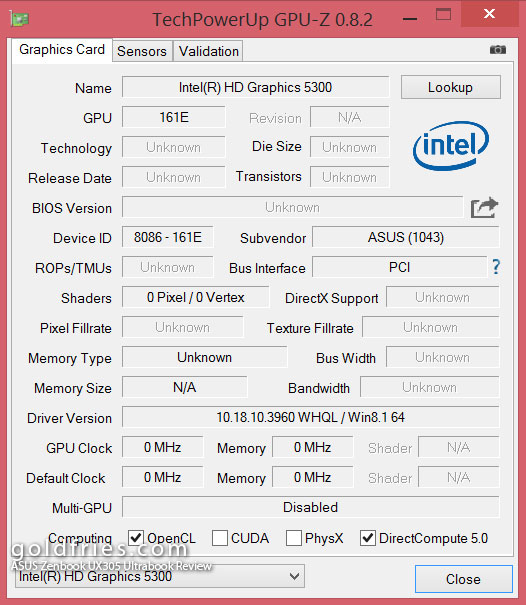 As you can see it’s slow, taking more than double the time of an Intel Pentium G3258 (desktop). Put it simple, the UX305 works for photo editing but if you’re doing mass RAW file conversion to JPG then it’s going to take forever.

As for video editing, suffice to say the UX305 would be a video creator’s nightmare unless you have the luxury of time to leave it to crunch away while you see life passing by.

Some of you might be asking whether the UX305 is suitable for gaming – NO, it’s not mobile computer for gaming BUT suffice to say I managed to run League of Legends and had a few games, albeit a rather sluggish experience. There are 2 models available at RM 3,199. The first model sports a faster processor which is the Intel Core M-5Y71 and has 256GB SSD as well but with 4GB RAM.

The other model uses an even faster Core i5-4210U and uses an Nvidia GeForce 840M graphic card BUT it comes with only 4GB RAM and uses 1TB HDD instead of SSD.

I like the UX305 very much asdespite its short-comings but the specs leaves much to be desired. It’s like an RPG game where you have limited amount of points to allocate for skills.

It doesn’t make sense to have 8GB RAM specs paired with lower end processor. While the higher end CPU / GPU unit is crippled by 4GB RAM and 1TB HDD.

Perhaps ASUS should consider having Intel Core M-5Y10 model with 4GB RAM and 1TB HDD at with a lower price-point.

Rants on the spec aside, I think the ASUS Zenbook UX305 is a great ultrabook (slim profile notebook).