The Ryzen has risen, finally I’m able to talk freely about the Ryzen 7 1800X. The invitation was handed to me since end of January this year and I had to keep it a secret until last week, and even so NDA still applies on benchmarks and any other findings until now. If you’ve watched my video, you’ll know what kid I have with me so there isn’t much to it but for those who haven’t, AMD supplied me with the Ryzen 7 1800X, an MSI X370 Xpower Gaming Titanium motherboard, a pair of DDR4 (2x 8GB) from Corsair which is the Vengeance LPX and as for cooler it’s the Noctua NH-U12S SE-AM4.

For this article I’ll just stick to performance and experience, technological explanations and all – I’ll leave that for the guys from AMD, I have video recordings of the presentation and I believe they do better justice in explanation than I could. 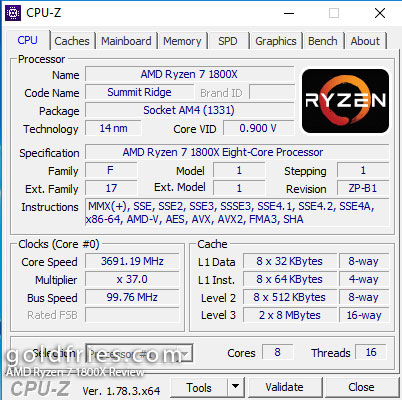 I’ll have to make it clear that I’m an overclocker, a gamer and a content creator so you know the direction of this review.

Let’s start with this, the Ryzen 7 1800X is overclockable but it’s not a great overclocker. My unit for example couldn’t stabilize at 4.1Ghz regardless what voltage I pumped, I got it up to 1.55vcore and it still wouldn’t work. It’ll reach Windows desktop but crash shortly after.

4Ghz is good but it requires voltage pump to around 1.45 range and that makes it heat up really fast and the supplied cooler can’t handle it. I could possible get it to go higher with my NH-D15 but since the NH-U12S SE-AM4, I decided to stick to that one and see how far I can push it. 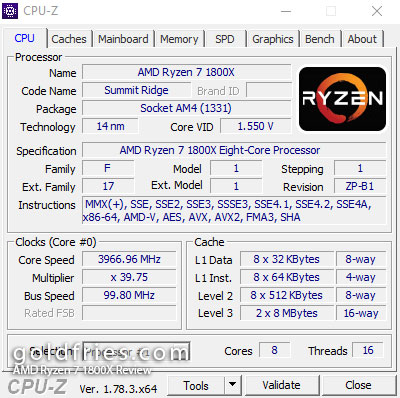 The readings are all over the place for my overclock’s clock speed, for example I could put it at 39.75 multiplier and CPU-Z reading shows 3966Mhz, OCCT reading shows 3992 while Ryzen Master utility shows 3.98. 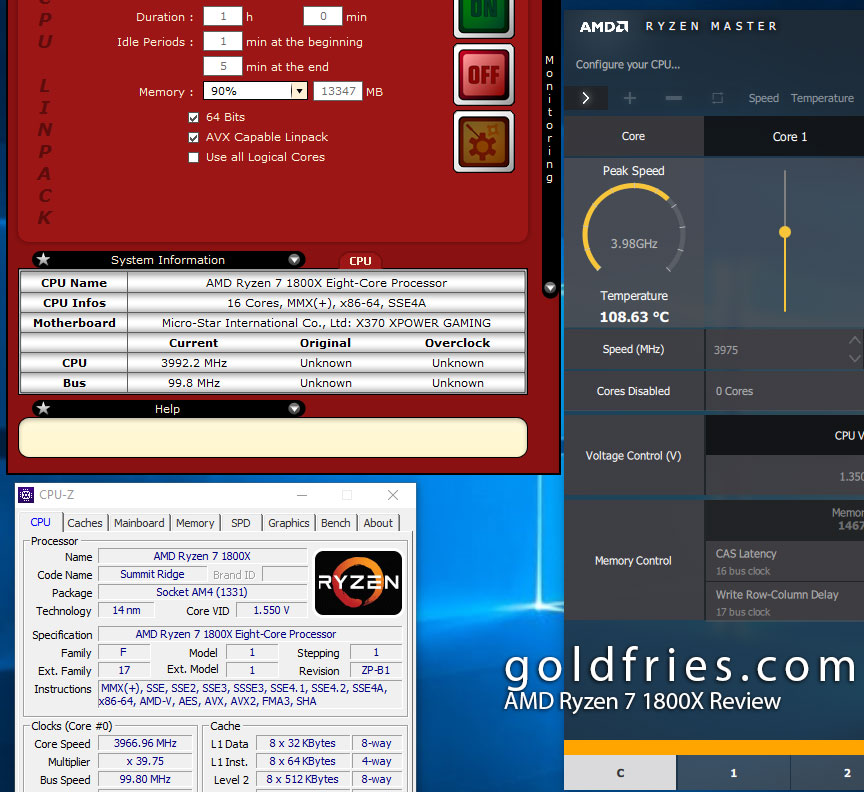 Bear in mind that the whole system is new, so any form of knowledge or experience with AMD and Intel setups in the past can’t be applied, expectations are best set to neutral should you ever intend to be an owner of the AM4 / Zen system.

I was pulling my hair at some point with the overclocking, for example I could set 4000Mhz with 1.400vcore and fail at OCCT Linpack (with AVX) test BUT setting it to 3993Mhz with 1.400vcore (yes, 7 measly Mhz less) and it passes with flying colors. Weird? Yes I think so but I couldn’t pin point the cause or why that teeny bit affects it at all.

Even the memory settings were messy, AMD E-mailed us about a day ago (Wednesday) that the memory had to be manually set. Fortunately I had discovered this matter days ahead (Saturday), this after I had countless failed stability test. That’s when I went into the BIOS and discovered that the AMP profile can be loaded but the memory settings doesn’t seem to apply. It’s a WTH thing but I guess it’s also understandable since it’s a whole new system and there’s still many things to iron out.

AMD has also introduced the Ryzen Master tool for software based overclocking, basically the system will only load the overclock setup after the software is loaded. While the interface is simple, I find it too simple and furthermore it lacks monitoring and the amount of tweaks that can be done is just limited. This is after all a software, there are some basic stuff that it can communicate with the BIOS but for the finer details, BIOS is the way to go. 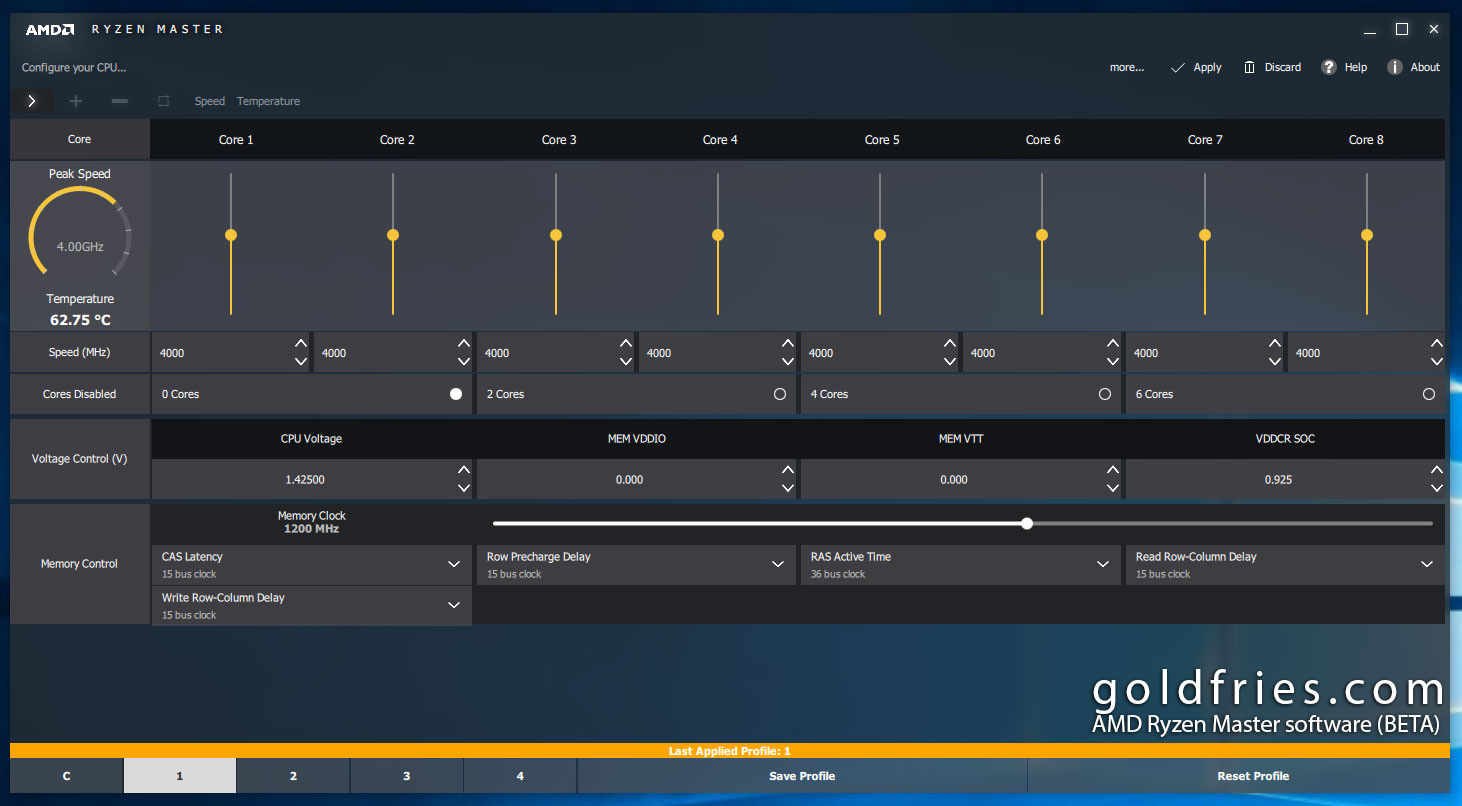 As for my experience in overclocking the Ryzen 7 1800X using 2 motherboards thus far, I can tell you that the boards do behave differently. I had better overclocking experience with the MSI X370 XPower Gaming Titanium than the ASUS Crosshair VI Hero.

In the end I settled at the following which I reckon it’s good enough for me to round it as a 4Ghz overclock. CPU-Z Validator link is here. 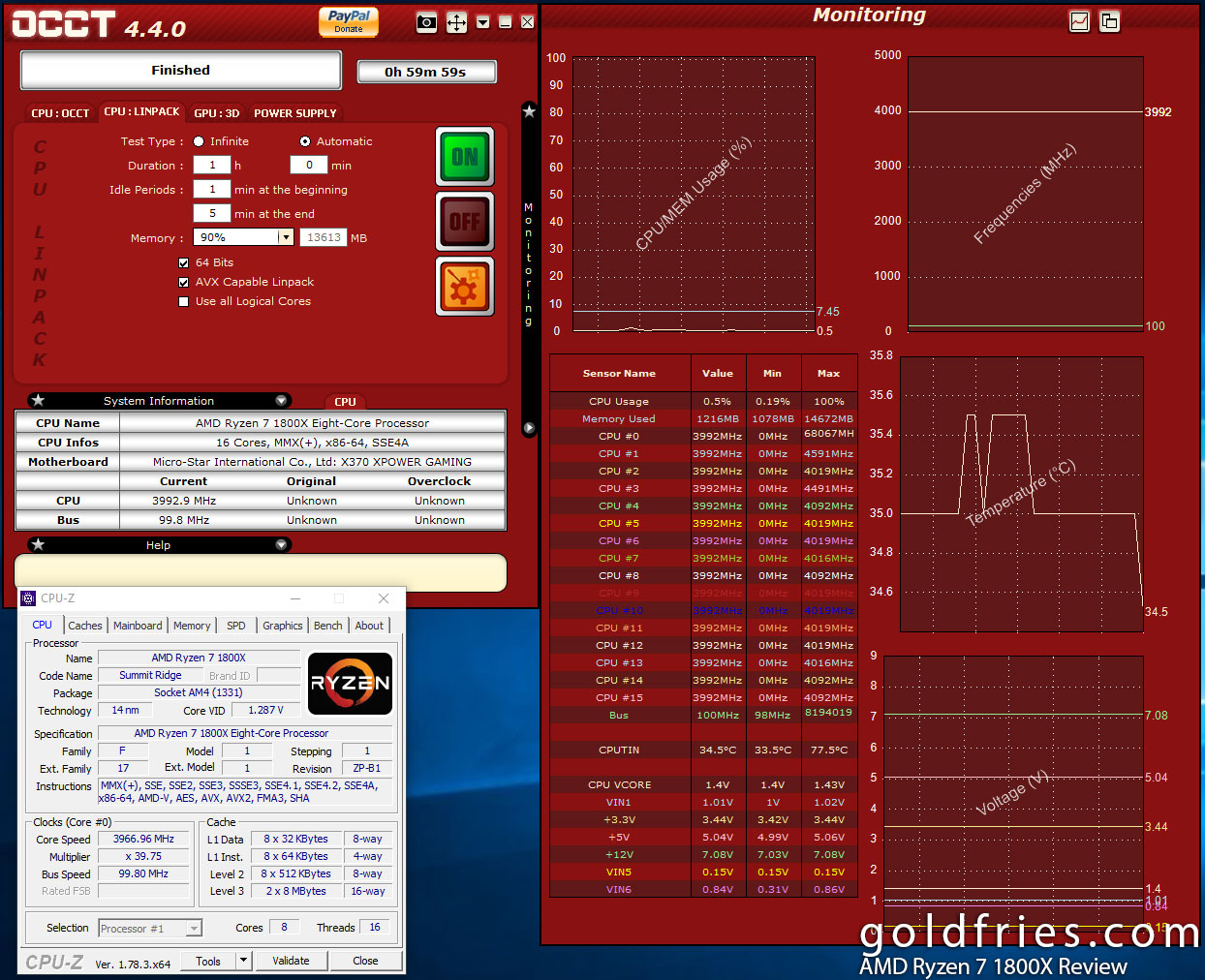 Before I head on to gaming and other part, I think I should address the temperature and power draw matter first, after all it is related to overclocking.

The temperature reading for Ryzen is from the on-die sensor, and so it’s not surprising that the temperature seems high. While having on-die sensor is great for information, the BIOS on the motherboard tends to panic because it deems that the processor is overheating thus decides to spin the fan to whatever howling speed it can get.

As for voltage, the Ryzen 7 1800X works great at base clock where the voltage is low and temperature is under 80c on load but once overclocked, that’s where you need the vcore pumped and the temperature reading can go over 100c.

Here’s what it looks like for the temperature reading.

As for the power draw, here’s what it looks like with my setup. The AMD Ryzen 7 1800X does not come with onboard graphics system so an AMD RX 470 graphics card was used for graphics output.

Power Draw is estimated to be around 90% of the readings from the wall.

On the next page I’ll cover the benchmarks, which includes content creation, and not forgetting gaming.