You Should Use Social Media

The names Facebook and Twitter are often tied to “unproductive”, “games”, “only for active people” but in my opinion this is just a huge misconception due to the tabloids and various articles that only highlight the negative.

In this article, I will share on how Social Media is helpful in life. I will not be covering Social Media for Business as that one deserves another article on its own.

Social media has been my source of news since 2009. Hot news spread like wild fire as people share it around. That’s not to say that they replace Online News Portals, Newspapers (The term “online newspaper” does not make sense) or the News on TV but news still get around.

I remember how I found out Michael Jackson’s passing when I was on holiday in Penang back in the mid of 2009. I got the news when I was skimming through my Twitter timeline during breakfast at the hotel restaurant.

Another incident happened in 2010 when I was on my way to an event. I was on the road, and so happen to be at a traffic light somewhere in town. I sensed a tremor and thought probably it was due to some heavy vehicle passing by but later on I found out there was an earthquake in Indonesia, again I got the news from my Twitter timeline.

You don’t have to be a person that’s ACTIVE tweeting away to use Twitter and Facebook. If you just like to read and get updates, just follow the accounts that shares news. Example : CNN on Twitter and Facebook. That’s just world news, there are plenty of others that share news of other topics, politics, tech, fashion, weather and so on so forth. You just have to find them.

Besides news, there are also individuals or organizations that share various topics of interest.

It kind of overlaps with the news however the ratio between NEWS and ARTICLES varies. Some publication focuses more on news, others may focus more on helpful articles.

Generally the more you follow, the more updates you get.

Besides articles and such, there are sites like Youtube where educational video content are available for the masses. There’s plenty of content suitable for people of all ages, I’ve known of people using Youtube to assist in the mental development of their child. If it can help children, it most certainly can help you. 🙂

Besides news, quite often I use Facebook and Twitter to get information. 🙂 Generally this one works better when you have more contacts, for example “How do I ……..” or “What is available at……..” kind of questions.

Social networks allow you to SHARE what others posted. With this feature, your friends could SHARE what you asked to their friends, and if there are more helpful people, it gets shared even more – this multi-layered reach is precisely why people use Social Media to share content for awareness. 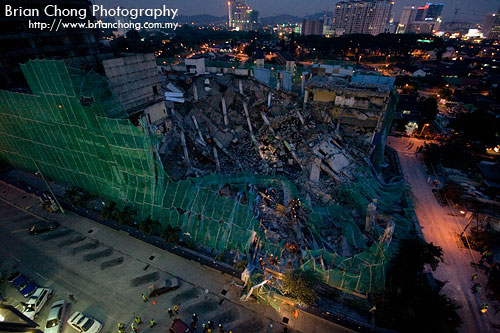 Social Media was the key tool for me to acquire the photo above, the collapse of the building happened back in 2009. The disaster site was next to a condominium / shopping complex. I remember how I was on site with only Twitter and my Nokia N85 (I think), and how someone who was on Twitter became a middle person between me and Lowyat.net Forum members.

I posted my status and question on Twitter and he updated the forum, and at one point someone said I could actually reach the higher floors. Messages came back and forth between the mediums, bit by bit guiding me to reach the upper floors and at one point, stumbled upon a helpful resident that brought me to a much higher floor to get the shot.

It took me more than an hour to finally find my way to the top. Here’s the album.

This one goes without saying, Facebook is “Unproductive” you say? Yes, there’s no denying that the Entertainment-factor on Facebook is +9999 (just a figure of speech). 😀 The experience of image and video sharing on Twitter is very different from that of Facebook. Besides, Facebook has tonnes of games for the masses.

*That’s my character in The Sims Social

That said, how “Entertaining” is Facebook still largely depends on your preference and your contacts. 100 contacts that constantly update wall status and sharing content, is much more interesting than having 3,000 contacts that only read.

Social Media is for everyone. You don’t have to be actively sharing content to be part of a social network. It’s one of the places that you can take without giving and not feel guilty about it. 🙂

Each time I publish an article, my fan page gets an update. If you LIKE the page, you’ll see the update as well.