Nvidia GeForce GTX 1060 – What To Expect in Terms of Price and Performance?

OK so what have you heard by now? I guess you’ve heard not only that the GTX 1060 is coming, you’ve probably heard about performance being that of GTX 980 and price at around RM 1000 and so on. So is that what you should expect?

Now before that, let’s have a look at the specs……..

OK now that you’re done with the specs, here’s what I posted on Facebook.

Now it’s really naive for one to think that GTX 1060 in Malaysia will be priced at RM 1,000 or any where near a figure based on direct conversion.

So looks like my rough 30% add-on to the calculation seems optimistic.

Below is the performance chart found at the GTX 1060’s official product page. 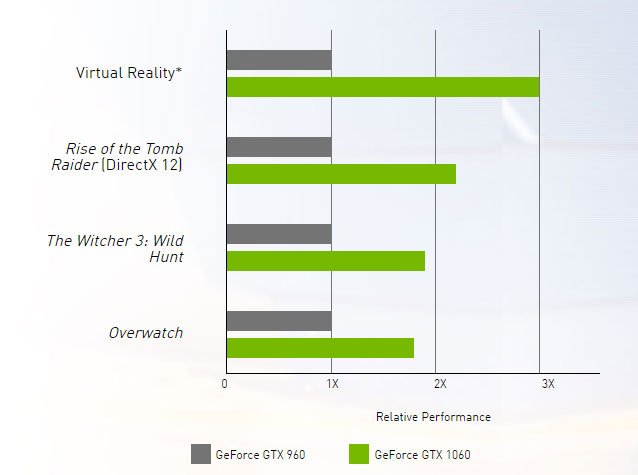 We’re looking at almost 2x the performance of a GTX 960.

Going by my database of numbers, I must say that it’s entirely possible for the GTX 1060 to achieve GTX 980 performance level BUT that is on assumption that the claims by Nvidia is true. However in order to avoid “running into a brick wall” with the hype train and getting yourself hurt, I recommend that you set your expectation for the GTX 1060 to perform like a GTX 970 or at most in between the GTX 970 and GTX 980, after all it wouldn’t hurt to lower your expectations.

Another point to consider, going by the CUDA cores, memory bandwidth and all other factors, if it’s really around 66% – 75% the performance of a GTX 1070 then it certainly will be on par with the GTX 980 and it won’t be surprising that the price hovers around RM 1600 range. Bye bye AMD Radeon RX 480, it was nice knowing you. My guess is that AMD would have to adjust the RX 480 to stay competitive. This will affect all other cards that are in the market too.

I’ll end my article here, and I will now sulk in the darkest corner of my lab because I can’t get good price for my Nvidia GTX 960 and Radeon R9 390 graphics cards. 🙁 Kthxbai.