Among the items launched today, the Asus Taichi Ultrabook is the most interesting among the lot – imagine having an additional screen at the back of your ultrabook’s lid. Both screens being IPS panels!

This awesome innovation of an Ultrabook comes at RM 3,999 – not cheap but if the innovation works for you then it’s well worth it. Below is a video ( a guide of some sort ) on how the screens work.

VivoTab Smart on the other hand, is pretty much like the VivoTab range introduced before but it doesn’t have a dock. Instead there’s an optional sleeve and keyboard that comes to about RM 400 in total. The VivoTab Smart itself retails at RM 1,799 for the non-LTE variant. The LTE variant comes in at RM 2,099 – only difference being that the LTE variant has a SIM card slot.

MeMoPad on the other hand is Asus’ offering for a lower-spec tablet. Take a Nexus 7 and give a smaller resolution, processing power and a non-IPS screen and you have the RM 499 tablet that also comes with OTG cable. Pretty neat actually, especially if you don’t need the IPS panel, resolution and processing power. Overall cost is reduced by some RM 500 (compared to RM 999 Nexus 7 price). It runs Android Jelly Bean 4.1.

I’m unable to locate the product page for MeMO though. 🙁 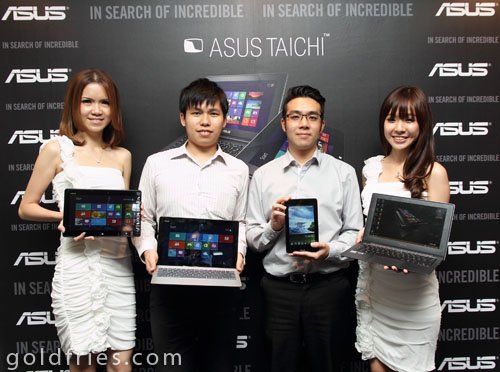