NOT at goldfries.com of course. We’re not a camera retailer. 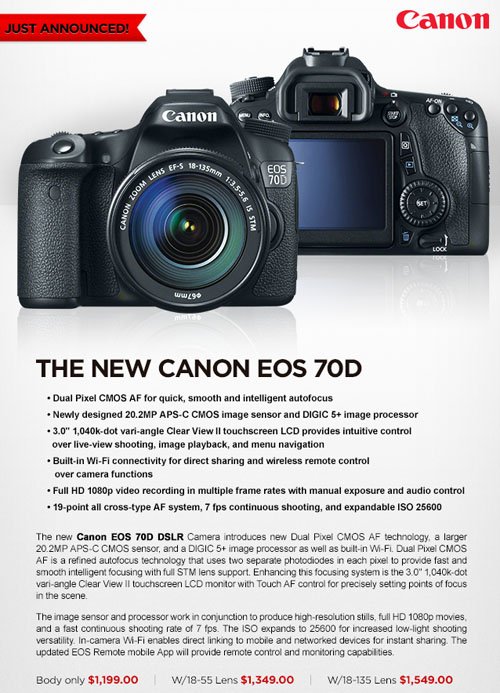 The above image was taken from B&H.

Here is their pre-order page.

More details of the EOS 70D at B&H Review

I’ve managed to test a unit of an EOS 70D during AUTOBACS Super GT Round 3 last month, however at that time I wasn’t told of the name – I was only told it was an upcoming product.

Of course, being a seasoned Canon user, I had already concluded that day itself that it was a 70D based on several traits I noted on the product at hand. Most notable was the dial and body itself that is exactly like the 60D, of course with some changes in the buttons to give it additional feature.

Let’s just say – this is exactly what I want in a camera, to only fall short on the lack of a full frame sensor (I want the dynamic range!). Nevertheless, Canon’s 18MP APS-C sensor has served me very well so I’m sure the new 20MP sensor will do even better.

Now back to my memory of using the 70D on race day – what I liked about the camera was that it had the video / photo switch near the view finder (not on 60D), and the mode dial was without the newbie modes. I also liked the new viewfinder, and that it had faster burst mode (yes, I use 60D long enough to know there’s a slight gain in burst mode on the 70D without knowing the specs).

Since the features are already in place, I’ll just have to wait for an EOS 6D Mark II.

So – are you buying?