Do you remember the name “Carrizo”? 🙂 You might remember it if you followed us on our live coverage of AMD’s Future of Compute.

In any case, the Carrizo is back again as with additional details unveiled by AMD at the prestigious International Solid State Circuits Conference (ISSCC). The upcoming â€œCarrizoâ€ Accelerated Processing Unit (APU) for notebooks and low-power desktops comes with advanced power management technologies to achieving substantial performance through the new â€œExcavatorâ€ x86 CPU cores and a new generation of AMD Radeonâ„¢ GPU cores. AMD expects Carrizo to reduce the power consumed by the x86 cores alone by 40 percent while also providing substantial gains in CPU, graphics, and multimedia performance over the prior generation APU. 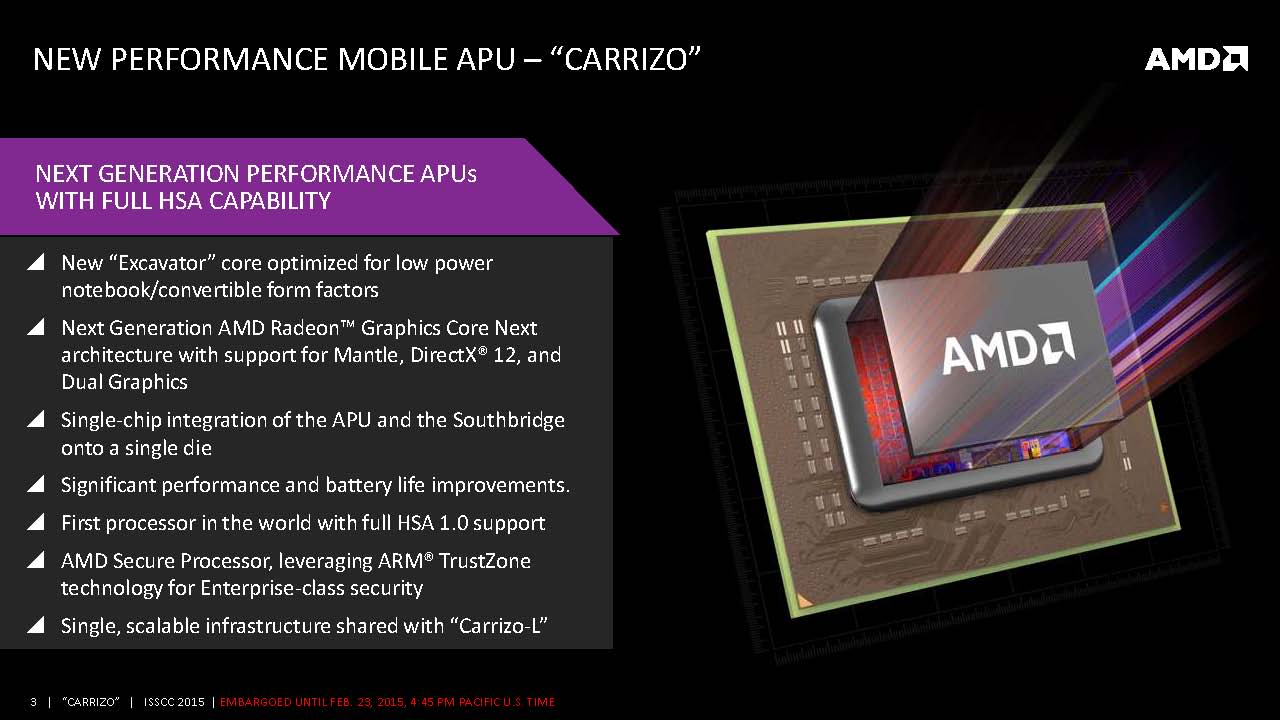 â€œAs a part of our continued focus on building great products, the advanced power and performance optimizations we have designed into our upcoming â€˜Carrizoâ€™ APU will deliver the largest generational performance-per-watt gain ever for a mainstream AMD APU,â€

â€œThere have been remarkable advances in performance and energy efficiency in computing since the birth of the modern microprocessor. However, the energy-related benefits that flow from new manufacturing processes have slowed, ushering in an era when alternative ways to improve processor performance and efficiency are needed. AMD has been pursuing Heterogeneous System Architecture (HSA) and proprietary power management technologies to make continued gains. The upcoming â€™Carrizoâ€™ APU takes a big step toward the AMD 25×20 energy efficiency goal and incorporates a wealth of new features that will be adopted across our full product line going forward.â€ 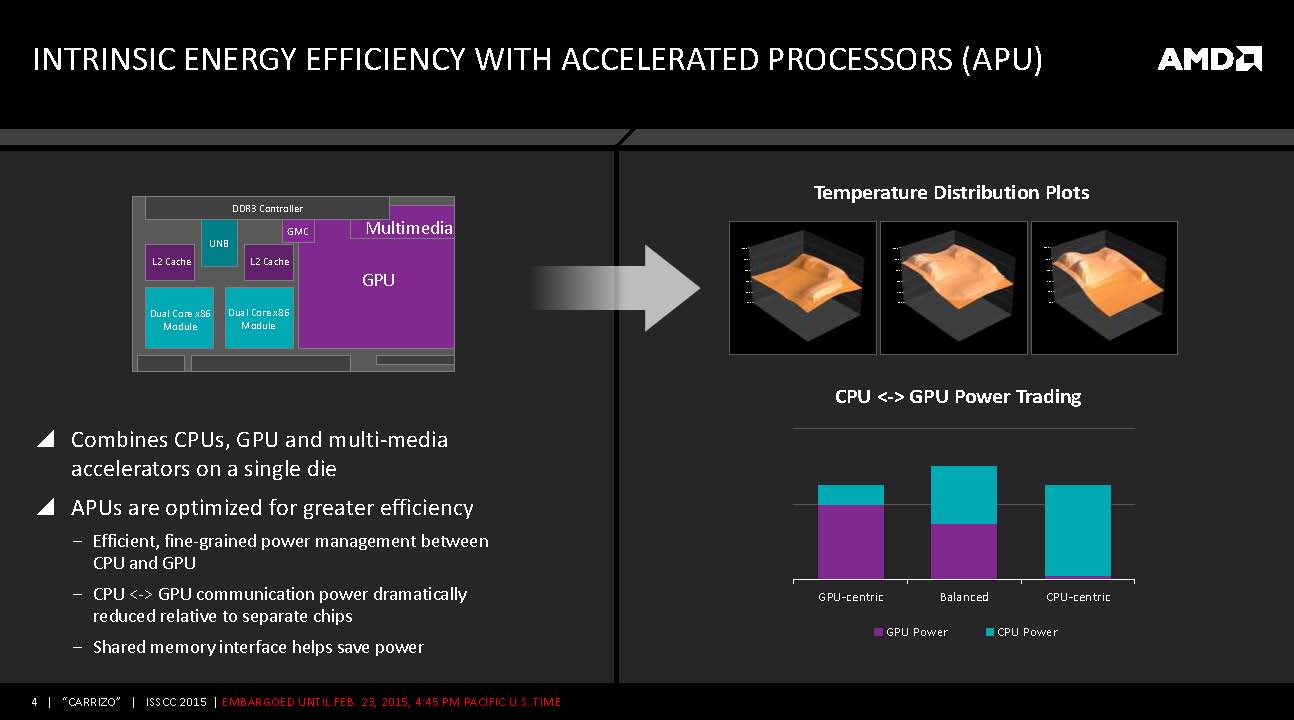 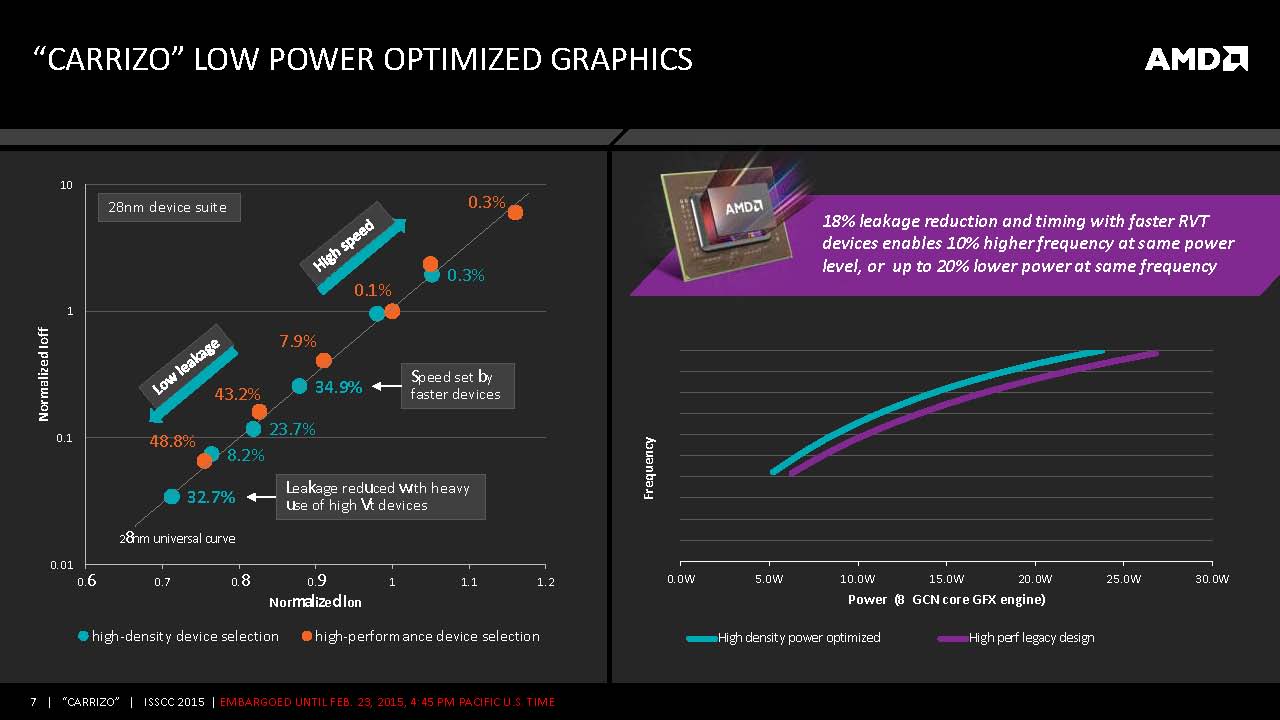 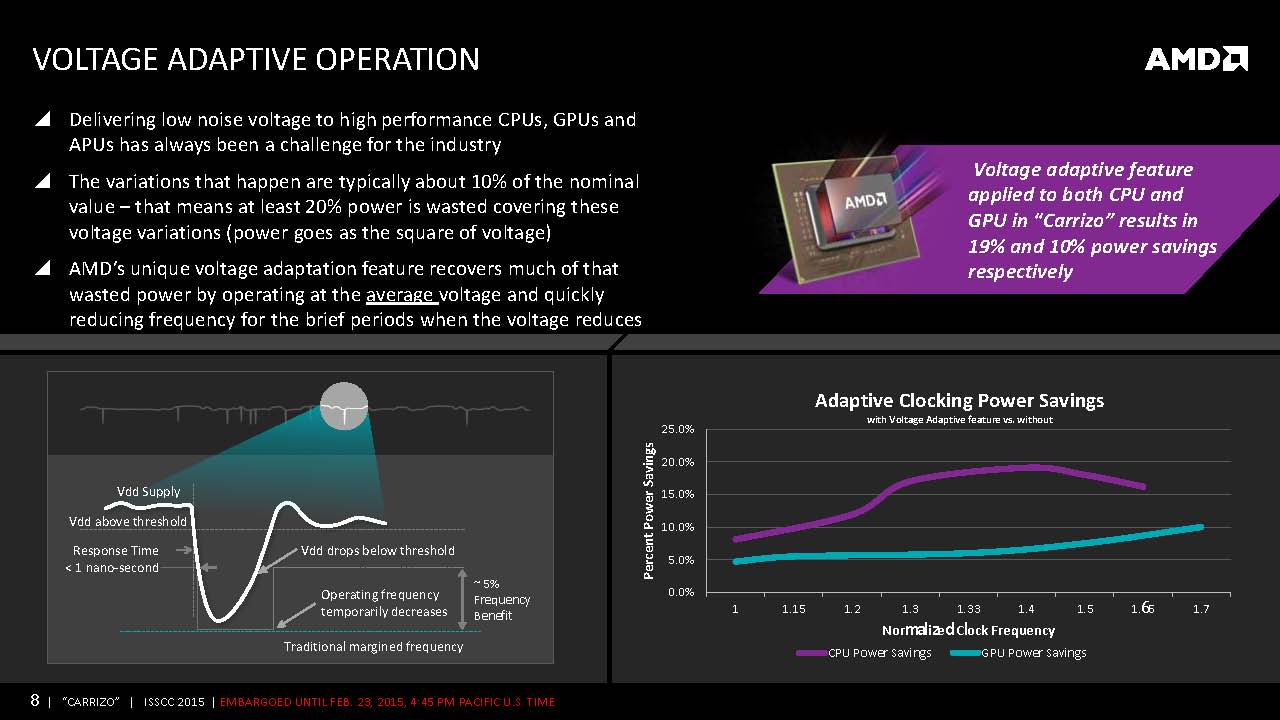 The additional transistor budget also allows Carrizo to become the first processor in the industry designed to be compliant with the HSA 1.0 specification developed by the HSA Foundation. HSA makes programming accelerators such as the GPU far simpler, ideally leading to greater application performance at low power consumption.
Chief among the design advantages for HSA is the heterogeneous Unified Memory Access (hUMA) within Carrizo. With hUMA, the CPU and GPU share the same memory address space. Both can access all the platformâ€™s memory and allocate data to any location in the systemâ€™s memory space. This coherent-memory architecture greatly reduces the number of instructions required to complete many tasks, thus helping improve both performance and energy efficiency. 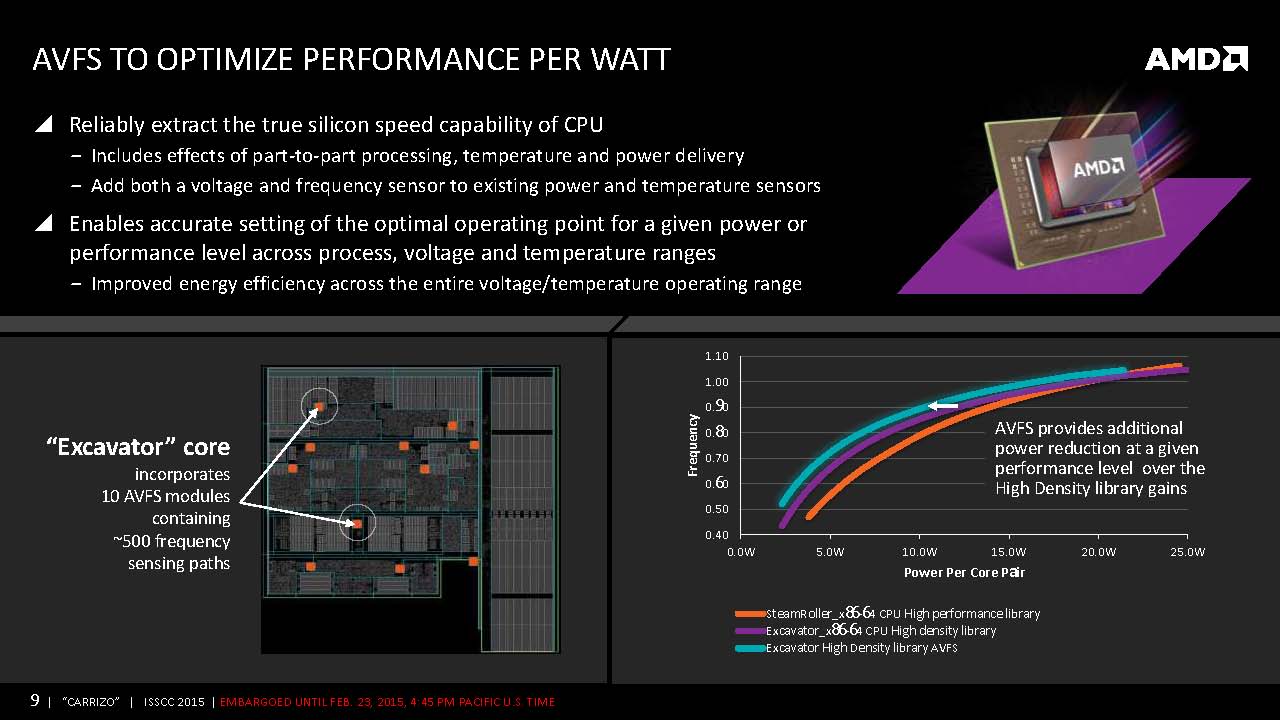 Several new power efficient technologies make their debut on the Carrizo APU. To deal with transient drops in voltage, which is known as droop, traditional microprocessor designs supply excess voltage on the order of ten to fifteen percent to ensure the processor always has appropriate voltage. But over-voltage is costly in terms of energy because it wastes power at a rate that is proportional to the square of the voltage increase. (i.e. 10% over-voltage means about 20% wasted power).

AMD has developed a number of technologies to optimize voltage. Its latest processors compare the average voltage to droops on the order of nanoseconds, or billionths of a second. Starting with the Carrizo APU, this voltage adaptive operation functions in both the CPU and the GPU. Since the frequency adjustments are done at the nanosecond level, thereâ€™s almost no compromise in computing performance, while power is cut by up to 10 percent on the GPU and up to 19% on the CPU. 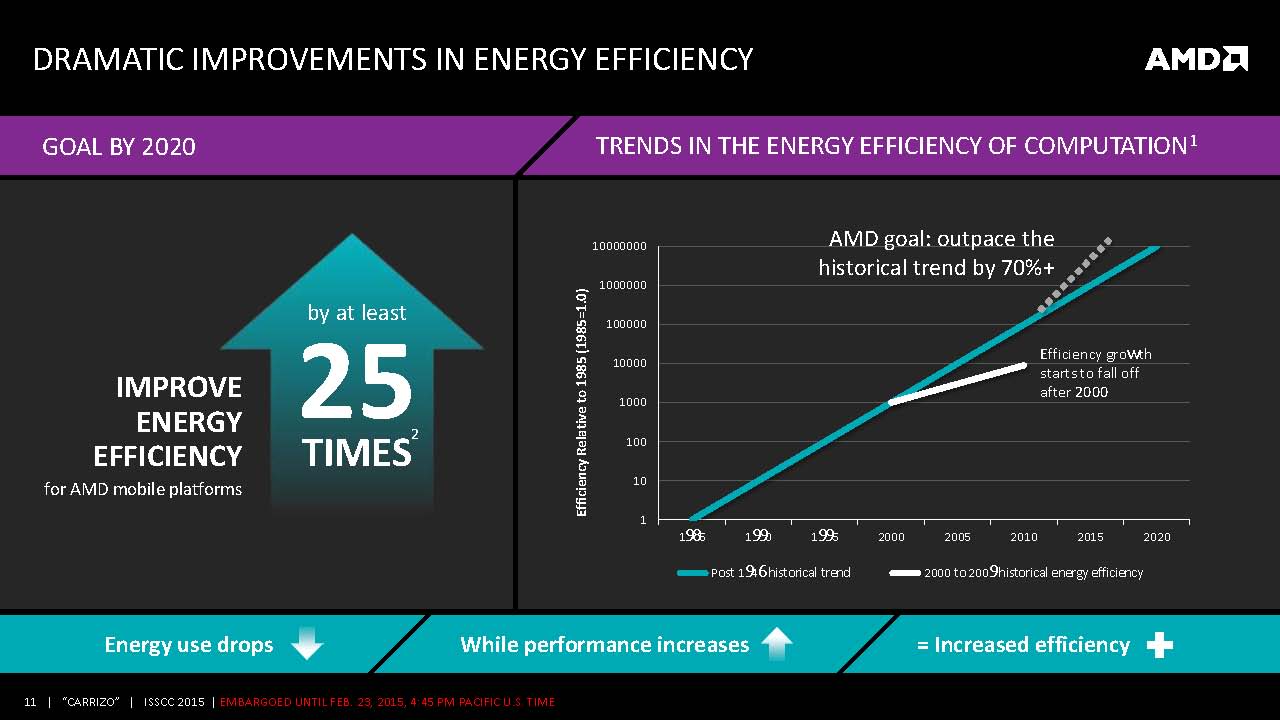 Another power technology that debuts in Carrizo is called adaptive voltage and frequency scaling (AVFS). This technology involves the implementation of unique, patented silicon speed capability sensors, and voltage sensors in addition to traditional temperature and power sensors. The speed and voltage sensors enable each individual APU to adapt to its particular silicon characteristics, platform behavior, and operating environment. By adapting in real time to these parameters, AVFS can lead to up to 30 percent power savings.

In addition to helping reduce power use on the CPU by shrinking the core area, AMD worked to optimize the 28nm technology for power efficiency, and tuned the GPU implementation for optimal operation in power limited scenarios. This enables up to a 20% power reduction over the Kaveri graphics at the same frequency. Combined, AMDâ€™s energy efficiency innovations aim to deliver power savings on the order of a manufacturing technology shrink while staying in a well-characterized, cost-optimized 28nm process.