Introduced last year at Computex, the Cryorig’s Hybrid Cooling System is a unique concept that aims to improve casing air-flow for All-in-One liquid cooling systems and the model using this technology is the Cryorig A80. 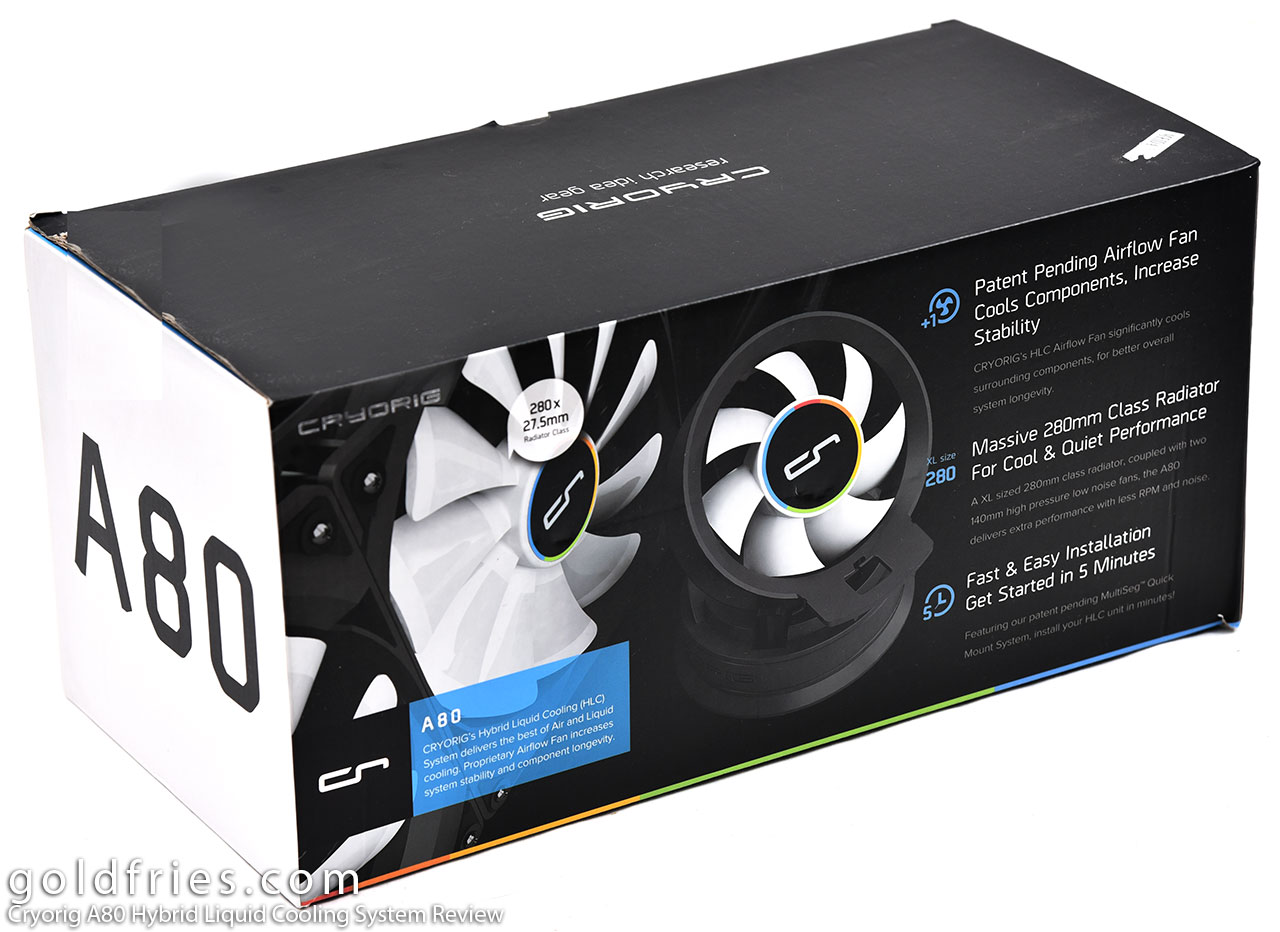 For those of you who haven’t watched their presentation, here it is.

Oh and don’t forget to subscribe to my channel, I’ll be at Computex and will be providing as many highlights as possible.

Now back to the unit, the main unit is no different from any other AIO but what I like about it is that it feels solid. I can’t put my finger on it but it does feel more solid than other AIO systems I come across. 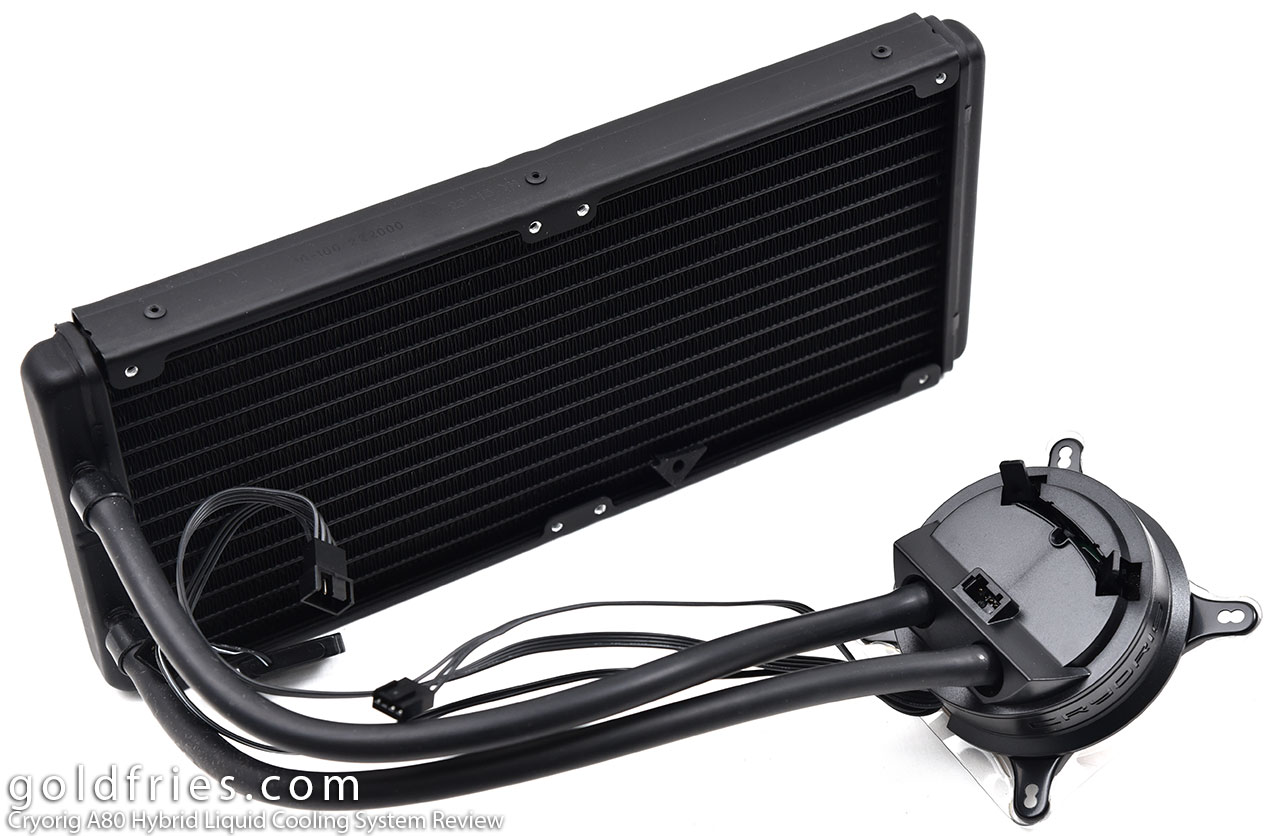 Unlike other AIO that comes with just the fans for the radiator unit, the A80 comes with one additional fan that is to be mounted on the pump unit. The 140mm fans carry CRYORIGâ€™s proprietary Quad Air Inletâ„¢ system with four strategically placed aerodynamic air inlet for extra air intake and higher air output volume to cool better. 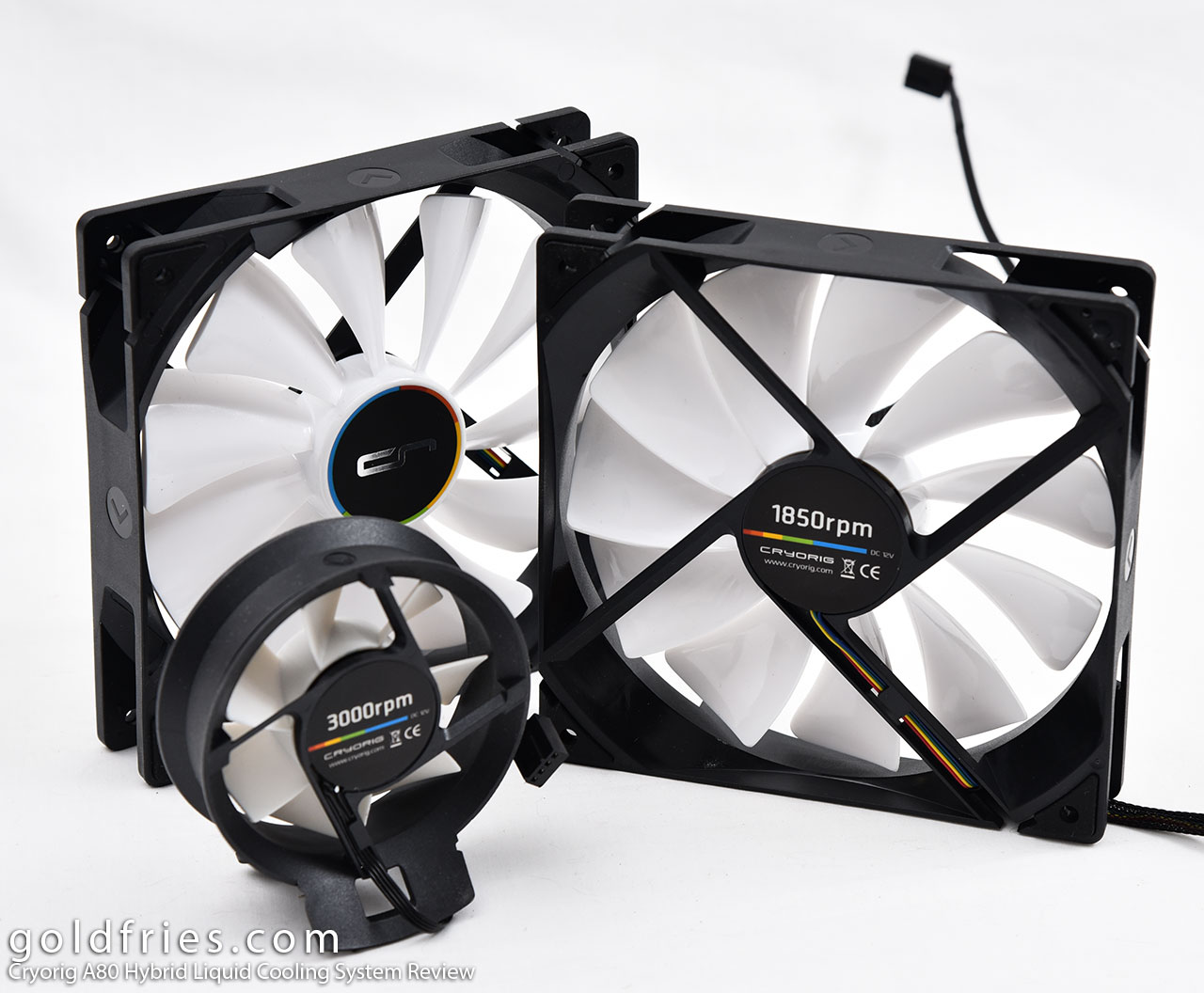 This is the pump unit, there’s the long opening and 2 clips to hold the fan in place while the PWM connector sits right between the tubes. 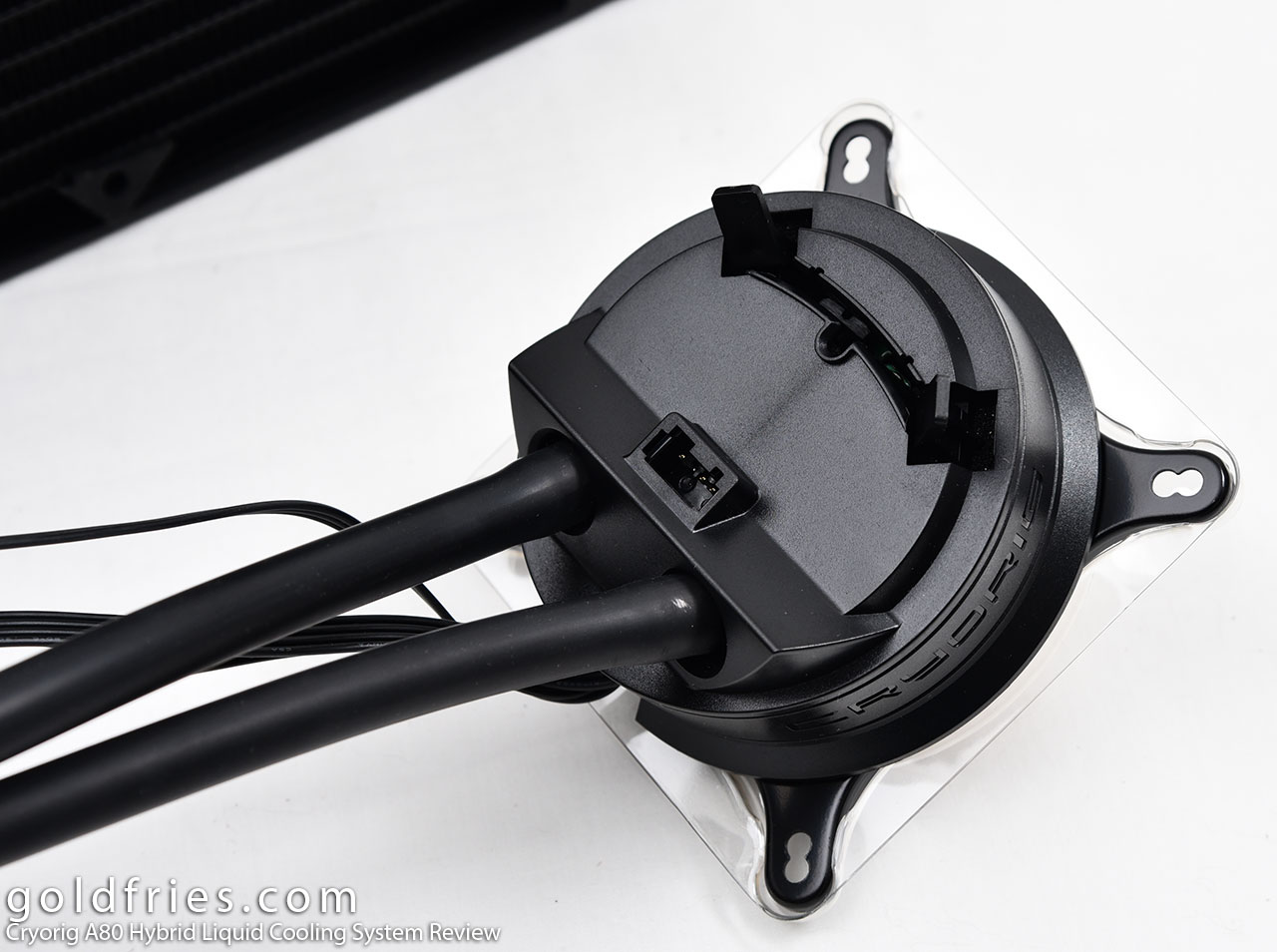 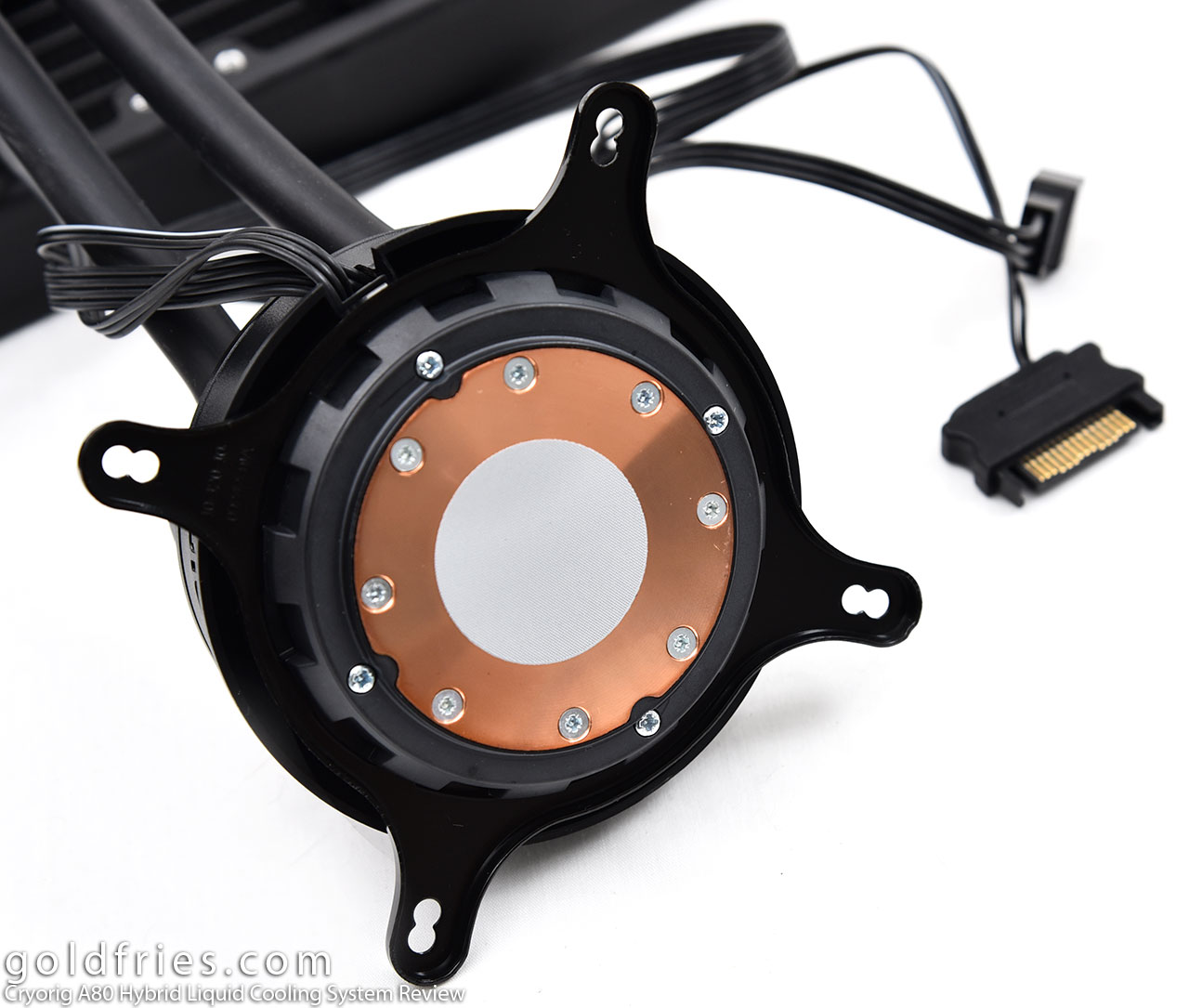 What’s interesting to note is that the unit is to be powered by a SATA power connector, very different from other AIO but in my opinion this one messes up cable management a bit because if I were to run a system unit M.2 or PCI-E SSD then I would be running without any SATA power connectors in the first place. Here’s how the unit looks when installed, point the fan in any direction you want and for each direction you have yet another 2 direction of fan placement so that’s a total of 8 different angles. 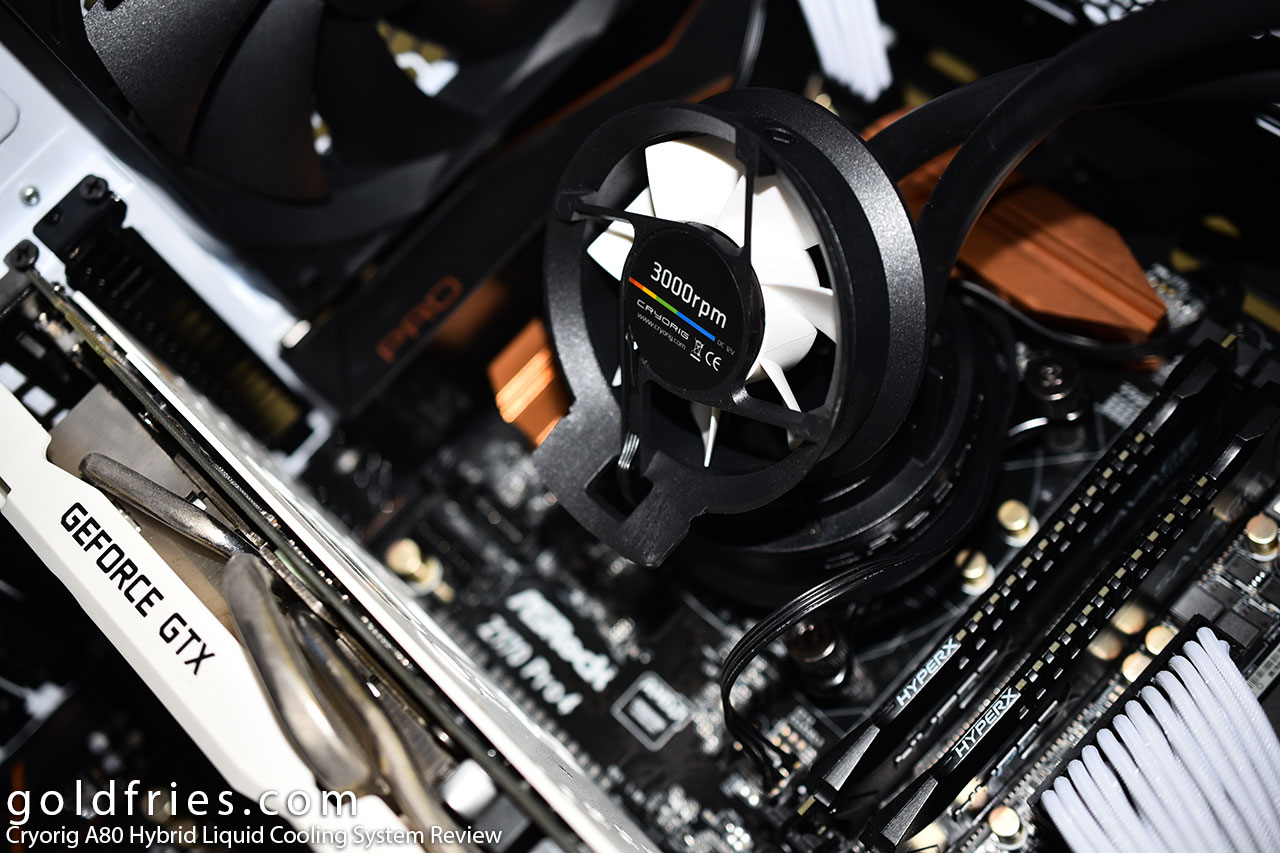 Below are the specs as taken from the official product page. 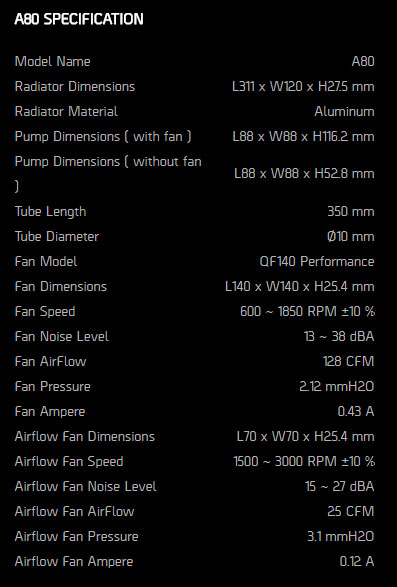 The performance was tested on an Intel Core i5-6600K overclocked to 4.5Ghz at 1.25 vcore with room temperature set to 25Â°C and the system was tested with a 10bit to 8bit video conversion test. Below are the results.

Looks like the system is very good at cooling, so good that even having it on AUTO cools just as well as the going loud with max RPM mode. Silent mode on the other hand cools the overclocked Core i5-6600K 4.5Ghz just fine with the heat being just a little over the ones from the normal and max fan speed.

Now if you’re wondering whether the fan is helpful, well one thing’s for sure is that it does provide air movement in the casing will help the airflow.

It is possible that having it face the RAM would be better, even with blockages it still provides additional airflow to the hot sticks.

The Cryorig A80 Hybrid Liquid Cooling System retails at RM 549, the extra fan does provide airflow advantage (based on the video above). What’s most important is that this is a 280mm radiator AIO unit that cools very well even in silent mode.