And so the much awaited GTX 1050 Ti is here, and first one to be in goldfries’ lab is the ASUS Expedition GeForce GTX 1050 Ti. 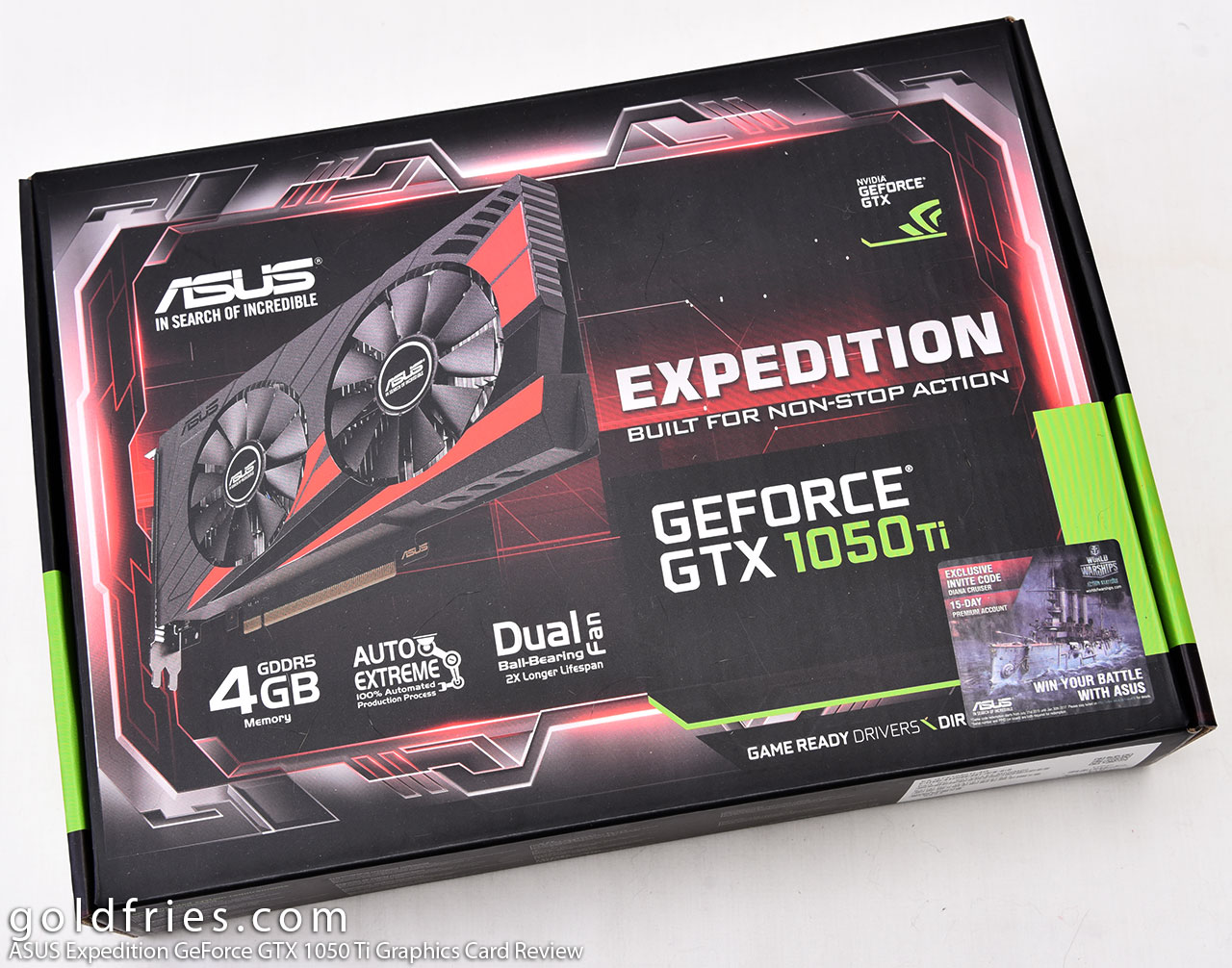 I did a Live session for the ASUS Expedition GeForce GTX 1050 Ti and here’s the video if you missed it.

The ASUS Expedition GeForce GTX 1050 Ti is a very basic card as you see in this picture. Nice touch with the ASUS word on the PCI-E connector slot. 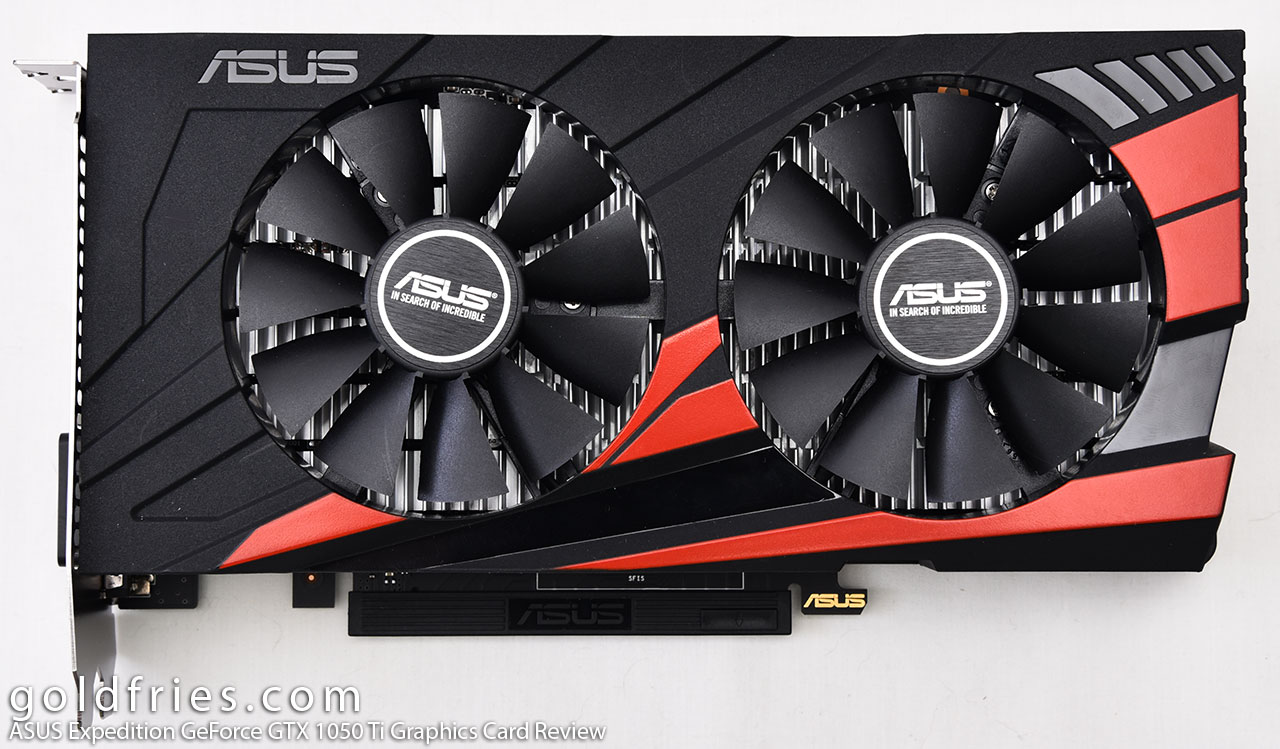 What’s neat about the GTX 1050 Ti cards is that it doesn’t require a PCI-E power connector, and for this model it’s bare basic so there’s no backplate on it. Here’s the I/O port and the under side of the ASUS Expedition GeForce GTX 1050 Ti – the shroud is absolutely simple and looks really nice to mod. Last but not least here’s the view of the cooler, I usually don’t do this but I got curious since it’s so easy to dismantle. Being a sub-75W card the cooling system is so simple it doesn’t require thin fins nor heatpipes. 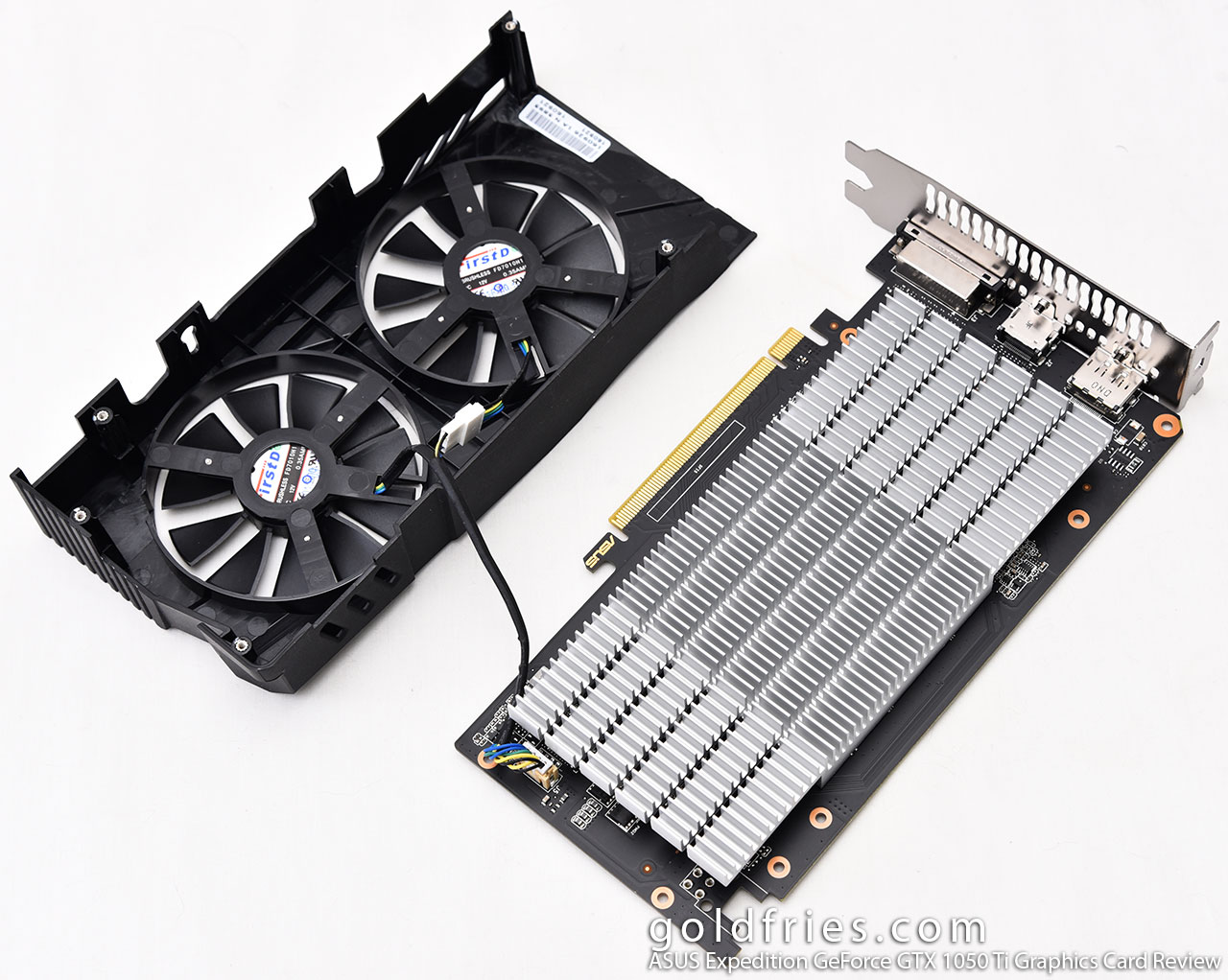 Below is the GPU-Z screen capture for the ASUS Expedition GeForce GTX 1050 Ti. 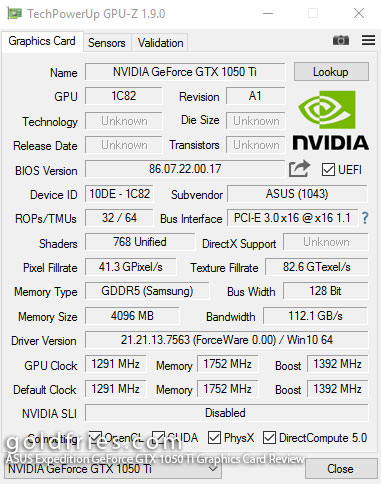 This is supposedly a low-power draw card but I managed to add 200 to both CORE and MEMORY (at 200 it means 800Mhz gained) and the card passed all tests while remaining under 75W.

When it comes to performance, I can tell you that I’m deeply disappointed but can you blame me for it? The PASCAL range of GPU from Nvidia has been stunning. Usually performance will be up a notch, like say the new GTX x50 would be at the performance of the previous GTX x60 model but it hasn’t been the case for the 10-series.

The GTX 1070 for example not just exceeded the GTX 980 performance but it reached GTX 980 Ti performance. The GTX 1060 that’s supposedly being at GTX 970 performance was performing like the GTX 980, and not only that they run at far less power and available at much cheaper price point. Needless to day, the GTX 1080 is also an amazing card that topples the previous generation Titan X with ease.

Looking at the track record, I can’t help but predicted that the GTX 1050 Ti would be around the GTX 970 level, I was hoping it to be ahead of GTX 970 but if not it should be at least close but this is not the case.

The GTX 1050 Ti performs like the GTX 960, if you look at the results above you’ll see that it’s pretty much identical in almost all the test! All in all, performance wise it’s nothing new, GTX 960 performance level at RM 700 – 900 range – that’s what we had with the 9 series.

The fan hovers at around 56% on AUTO settings when on high load, having the fans being dual 80mm means the system generates more noise than some other models.

What’s also interesting to note is that on overclock the power draw of the ASUS Expedition GeForce GTX 1050 Ti goes up to about 180 on peak and based on my calculation the card’s actual peak draw is around 72W, I conclude that Nvidia has limited the power draw for the GTX 1050 Ti so the core and memory, though clocked +200 on both, is actually running at throttled speed to meet the power target. I’m using the EVGA Precision software and the Power Target is limited to 100%. It wouldn’t make sense to push it beyond 100% either because the card has limited power to draw from the PCI-E slot.

I think the power draw is the best thing on the GTX 1050 Ti – it has GTX 960 performance minus the power-connector requirement, and if you remember I calculated it to draw only 67W and up to 72W after overclocking. This is amazing, consider my Galax GTX 960 requires 8-pin PCI-E connection and runs more than 150W on load so you gotta hand it to Nvidia on this part. That’s power draw reduction by more than half! (READ : Over 50%)

This card is for those who do not play graphically demanding games and have the intention to upgrade their graphics card and not worry about power draw. Sure, even an old PSU may have PCI-E power connector and a GTX 1060’s power draw is around 130W which isn’t too far off which is around 50W difference but if you go by percentage that’s nearly double too.

The ASUS Expedition GeForce GTX 1050 Ti Graphics Card retails at RM 759, you now get the GTX 960 performance at far less power consumption and lower price point. It’s still an improvement for graphics card of this segment. One thing’s for sure – Bye Bye AMD RX 460 while the RX 470 still holds some ground, depending on the games you play.

Put is simple – this is for people who worry about their PSU’s capability but just a reminder – having no PCI-E power connector doesn’t mean it won’t draw power, keep in mind that the PCI-E slot is able to provide up to 75W based on PCI-E standards so whether your PSU is able to handle that additional load is questionable, it’s just that without a connector you’re assured of lower power draw.

As for price to performance ratio, the GTX 1050 Ti isn’t all that appealing. I’m sure ASUS and Nvidia are reading this but hey, I’m stating the facts.

The lowest priced ASUS GTX 1060 3GB retails at around RM 1139. The 3GB model runs at a slightly reduced performance when compared to the 6GB model but the difference is around 5% – 10% depending on game. Now compare that to the ASUS GTX 1050 Ti that retails at RM 759. From a consumer stand-point, you have the option to pay 50% more to get anywhere from 50% to 75% boost in gaming performance. Not a bad deal. Remember, not many games push the 3GB VRAM limit and even if they did so, the GTX 1060 would still out performance the GTX 1050 Ti, fortunately the Price to Performance ratio for the GTX 1050 Ti isn’t far off so either way you get great stuff. It’s just that you get the better stuff if you wait out and pump in a little extra.

Now the thing that bothers me is now there’s a huge performance gap between GTX 1050 Ti and GTX 1060 3GB. 😀 This is pretty much like the GTX 960 and GTX 970 where there’s nothing in between them. I was expecting a GTX 960 Ti but it never came. Now with the latest arrangement it looks like there’s room for AMD to fill the gap. 😛