Here’s a video of the Z3S in action, it doesn’t take too long to power up and the interface is OK but certainly not the smoothest of experience considering the amount of RAM and the processing power. No details on the processor use but among us tech media, we reckon it’s a Mediatek processor that’s powering this baby.

What about gaming? Oh it works pretty well actually, I was expecting a rather sluggish experience with the Z3S but my gaming experience on Asphalt 7 turned out quite well. I think it’s mainly due to the resolution on the device, if the resolution was any bigger like 720p or 1080p then it’s sure to be sluggish, and you’ll be paying more too.

Photography wise, it’s a low-end camera so you shouldn’t be expecting much from it. There’s no tap-focusing on the camera so you’re just limited to wide angle photos, no close-ups. Here’s a photo of my test machine at about 3 feet distance. Above is the original photo resized to fit the site while at the bottom is the 100% crop from the original photo.

As mentioned earlier, the phone is without LED so you do not have a flash for your photos, neither do you have an LED light as torchlight. The white balance control isn’t great either but bear in mind that for a device at this price range, the camera is most certainly not something that the manufacturers will focus on.

Battery life looks pretty good too, 20 games of Bejeweled Blitz drained about 8% of the battery. As long as you keep your browsing limited then it should be fine, after all it’s the data connectivity that drains the battery life the most.

On the downside, the Wi-Fi capability of the Z3S seems rather weak compared to many other phones I used. The Signal strength seems to be a notch or 2 below the my other devices, the Nokia Lumia 925 and HTC One but bear in mind also that those devices costs a lot more than the Acer Liquid Z3S.

Bear in mind also that storage is limited on this device, it’s a good thing that the phone allows storage expansion with MicroSD. 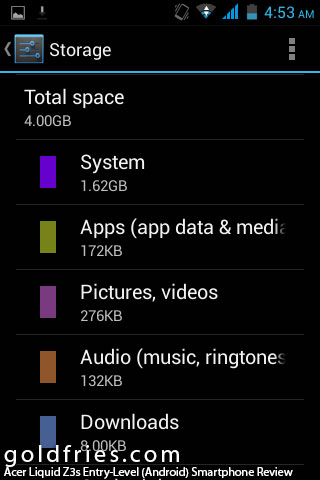 After installing Asphalt 7 that took up a little over 1GB space, the device is only left with the following …….

You may pre-order the Z3S at StoreKini – product availability is expected to be around end of February 2014.

RED is the only color available at this point of time, though WHITE and BLACK covers should be available in the future.

*goldfries.com will be giving away the Z3S very soon – Details will be announced at the Facebook Page.