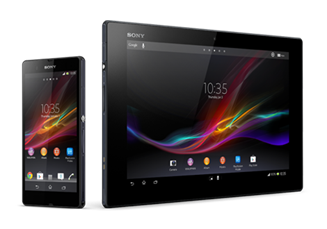 First previewed during the local launch of the Xperia Z back in March, Xperia Tablet Z is the most premium, high performance 10.1â€ Android tablet available. Built from quality materials and featuring the same stunning OmniBalance design as its smartphone sibling, Xperia Tablet Z is also incredibly slim and lightweight at 6.9mm and 495g.

Available in Black or White and in WiFi and LTE versions, it is the first tablet to run on QualcommÂ® Snapdragonâ„¢ S4 Pro asynchronous quad core processor and has the highest levels of water resistance (IP55 & IP57) ever delivered in a tablet, making it immune to accidental spills and splashes.***

â€Xperia Tablet Z sets new standards in entertainment by matching premium specifications and Sony technology with cross-device connectivity and a consistent user-experience. This device reinforces our intention to be a leading player in the premium Android device market, by building on the principles established by Xperia Z and perfectly optimising them to the tablet form factor,â€ said Ola Lilja MolÃ©n, Head of SEA Markets at Sony Mobile Communications.

Xperia Tablet Z includes the very best of Sony technology. With a 10.1â€ HD WUXGA Display, powered by Mobile BRAVIA Engine 2, it delivers enhanced colour reproduction for a brilliant TV-like viewing experience. It also draws upon Sonyâ€™s camera expertise with an 8MP rear camera featuring â€œExmor R for mobileâ€ as well as a 2MP HD front-facing camera for capturing the best images in any condition. Sonyâ€™s S-Force Front Surround 3D, guarantees soul-shaking audio performance alongside Sonyâ€™s Clear Audio+ mode and the innovative use of two in-built speakers with four â€˜speaker hallsâ€™ on the left and right corners delivers amazing sound no matter how it is held.

Xperia Tablet Z includes more connectivity options than any other tablet. It also includes Sonyâ€™s One-Touch functions that let users transfer content seamlessly from HD tablet to TV, tablet to speaker or phone to tablet just by touching them together. One-touch functions are a key component of Sonyâ€™s device range this year and no other consumer electronics company is bringing as many NFC-enabled products to market. The tabletâ€™s Universal IR Remote allows users to control the TV and other Sony devices – as well as products from other manufacturers – directly from the tablet placing the device at the heart of the home. TV SideView is a new application that gives users an entirely new way to interact with the TV.****

Sonyâ€™s signature media applications – â€œWALKMANâ€, Movies and Album – allow users to enjoy, control and view content regardless of their device.

A number of accessories including a charging cradle, an LCD Screen Protector and Leather Carrying Cover that comes in Black, White or Red will be available at all Sony stores nationwide.

Celcom is the exclusive service provider to offer the Xperia Tablet Z in conjunction with the launch. Commenting on the partnership, Zalman Aefendy Zainal Abidin, Chief Marketing Officer of Celcom Axiata Berhad said, â€œCelcomâ€™s network is now 4G LTE-enabled that allows us to cater for the growing number of LTE devices in this country. We are proud to partner with Sony Mobile to offer the Sony Xperia Tablet Z â€“ the very first LTE tablet in Celcom Fastest Territoryâ€™s widest, fastest, and stable nationwide mobile network. This partnership further cements our commitment to provide choices to our customers so they can find a device that perfectly suits their ever-evolving digital lifestyles.â€

The device will be available from Celcom for as low as RM1,438. Full bundled pricing are as follows, or visit www.celcom.com.my or any Celcom outlet for more information.