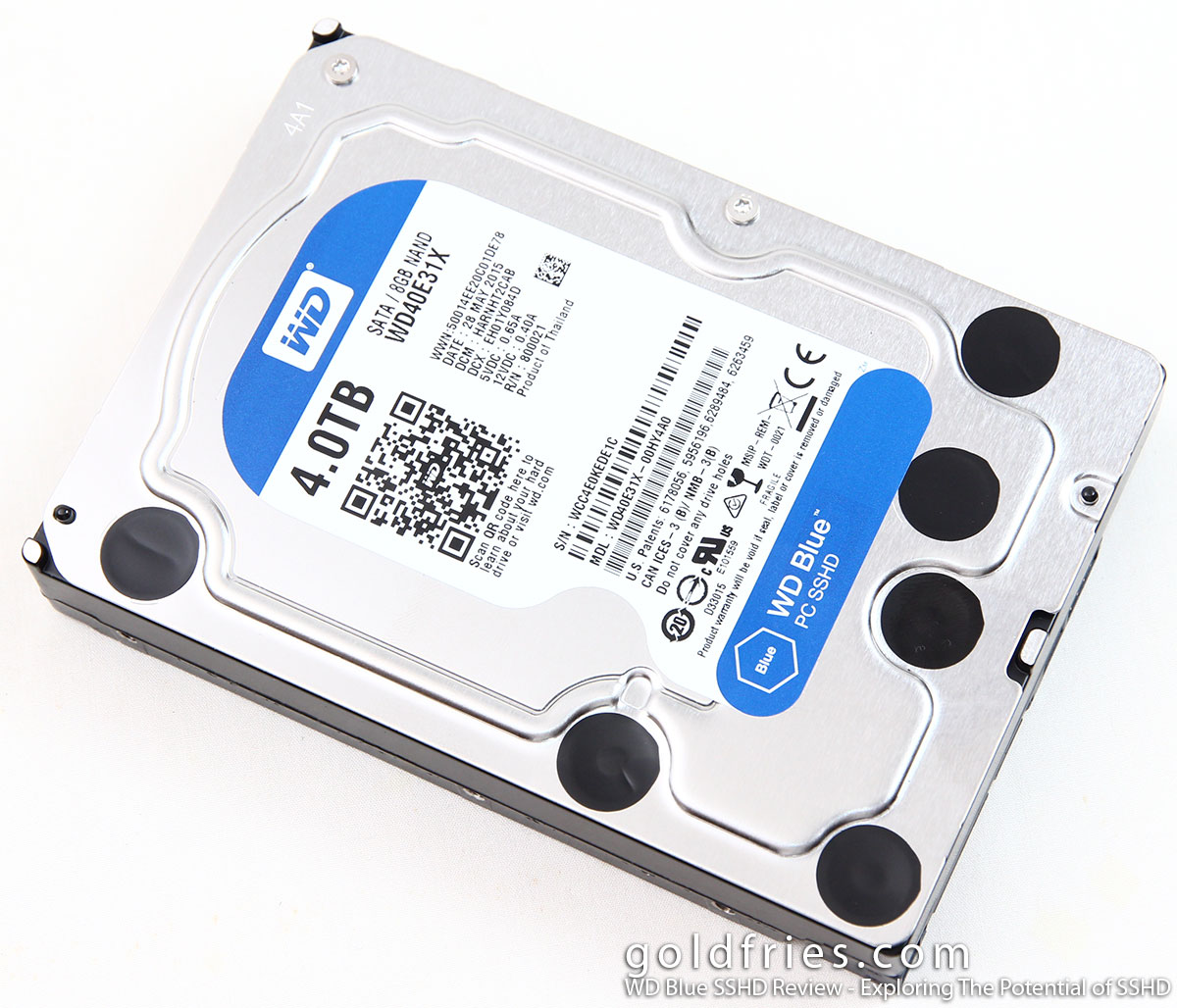 What is an SSHD?

Those familiar with the abbreviations HDD and SSD would’ve figured it out that SSHD seen in WD Blue SSHD is an abbreviation that’s a combo of both.

SSHD stands for Solid State Hybrid Drives – put it simple, the drive comes with NAND flash SSD technology and HDD storage capacity. It looks like any other HDD, check out the images below. 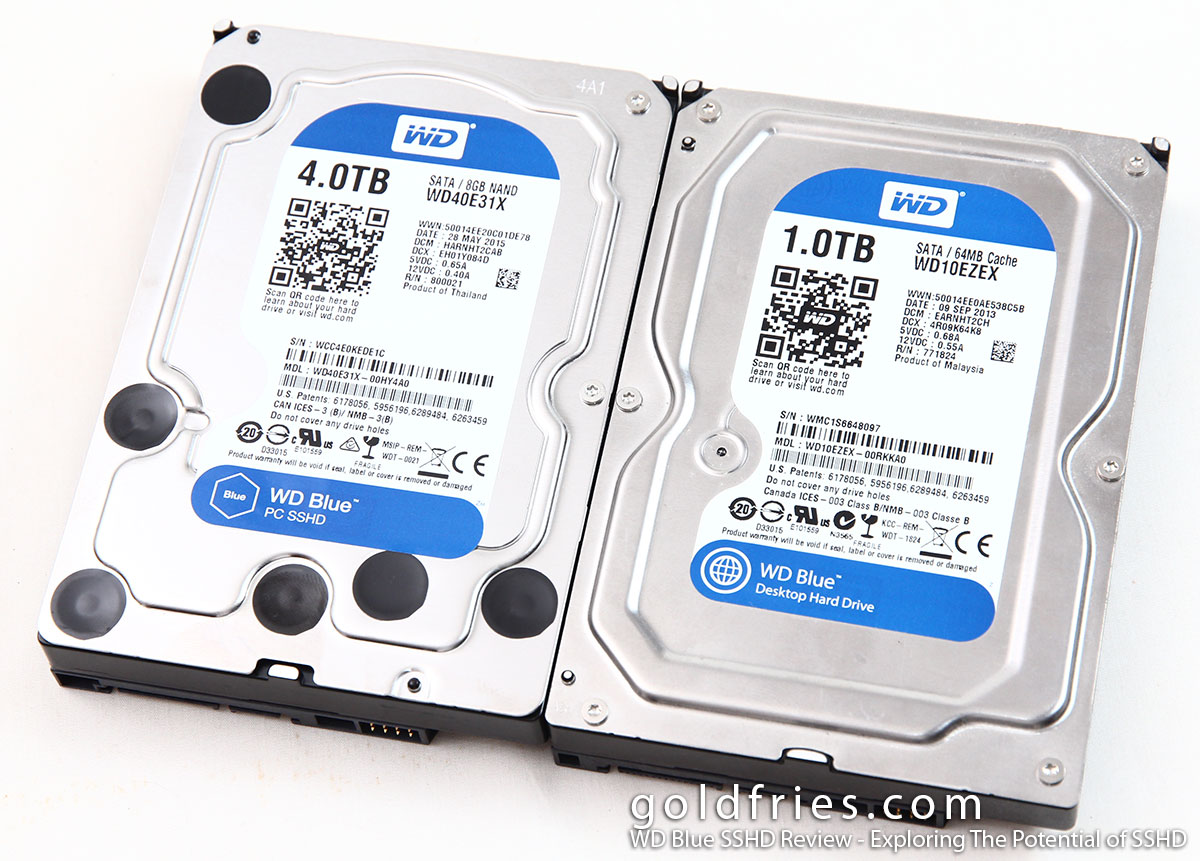 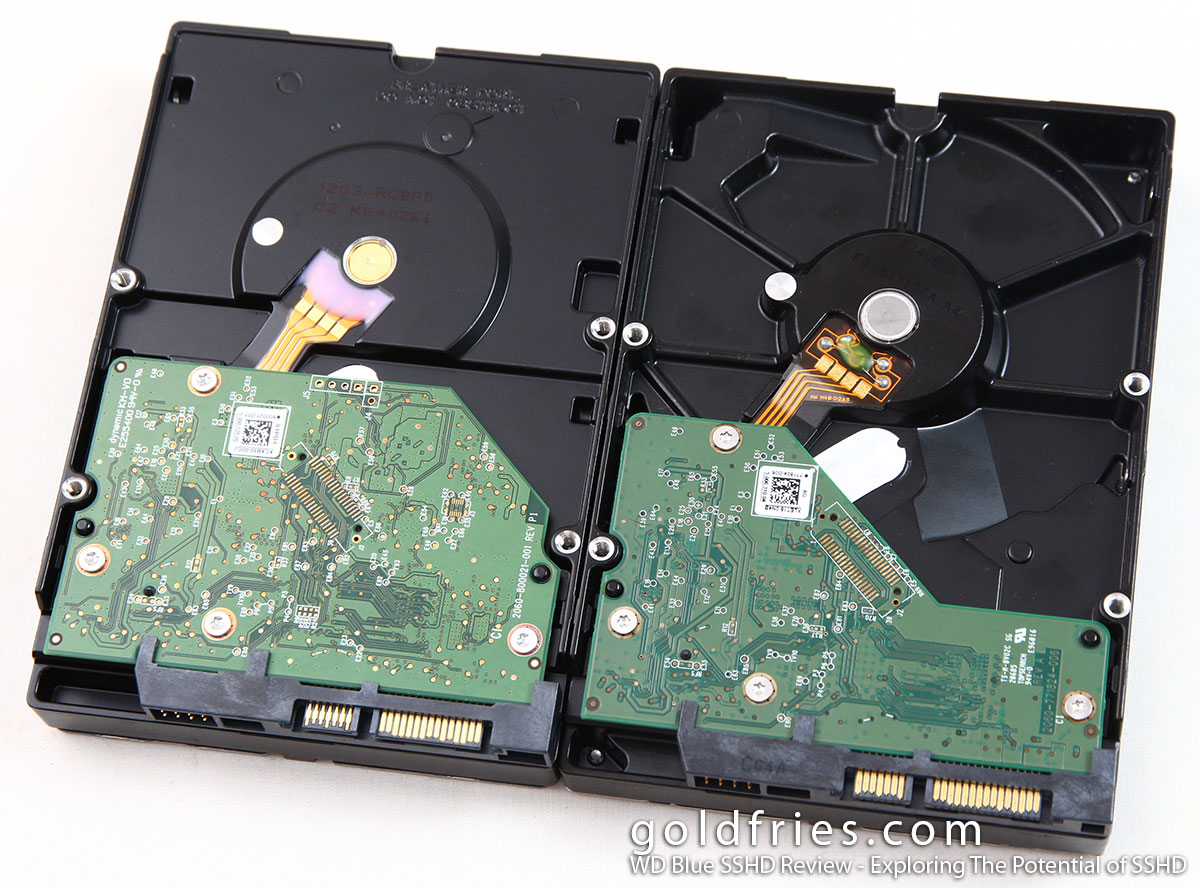 How Does It Work?

I think some of you might be a little excited over this subject and I can totally understand, the thought of having SSD speed and HDD capacity is just too good to be true, right? Well I’ll have to burst your bubble on this one because that’s not how it is.

Put it simple, WD Blue SSHD (as with any other SSHD) is a HDD with super large sized cache (8GB for this model) that’s using SSD technology. What you get is 8096MB (8GB) of cache, unlike HDD’s that often come with cache sizes less than 128MB.

NOTE – the key word here is CACHE, you DO NOT have access to that 8GB NAND Flash and there’s no way to control it either as what goes in there is decided by the firmware on the WD SSHD. The “Self-learning technology” tracks data usage and prioritizing the frequently used data by placing them on the NAND Flash (SSD) storage section.

Let’s take a look at the specs (Taken from the official product page) and benchmarks for the WD Blue SSHD. 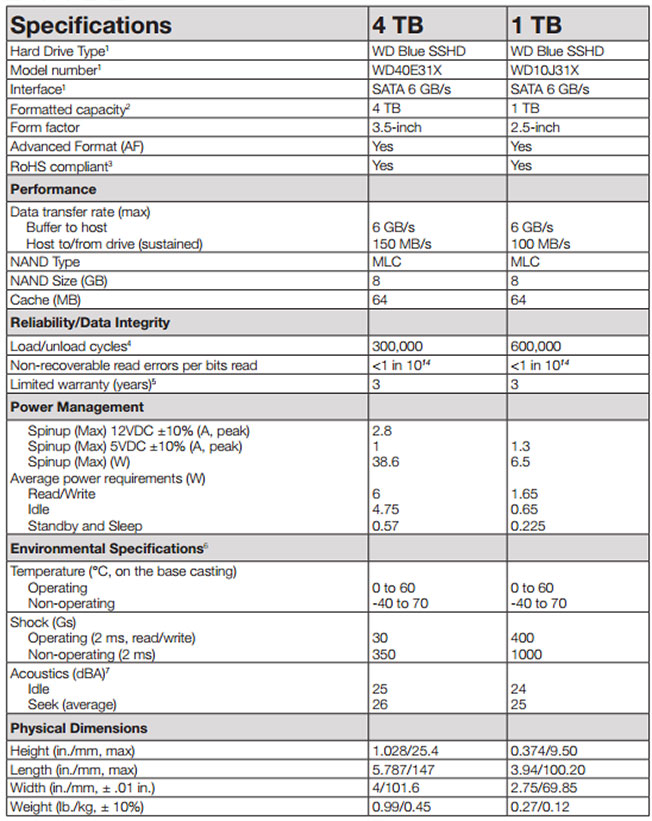 Below is the benchmark for the 3.5″ model. I have the 2.5″ model with me and I didn’t see the need to benchmark it because you could pretty much gauge the performance based on the specs above. 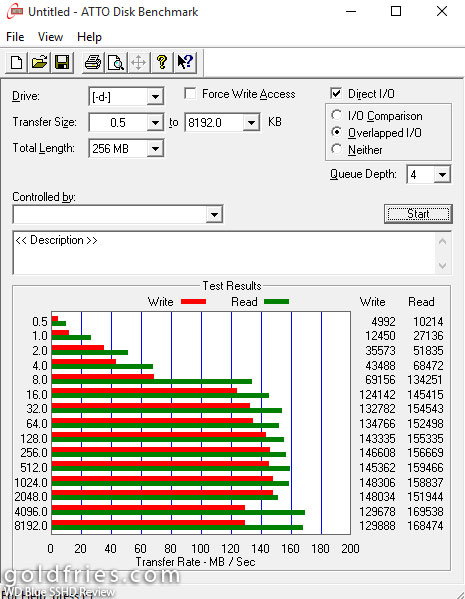 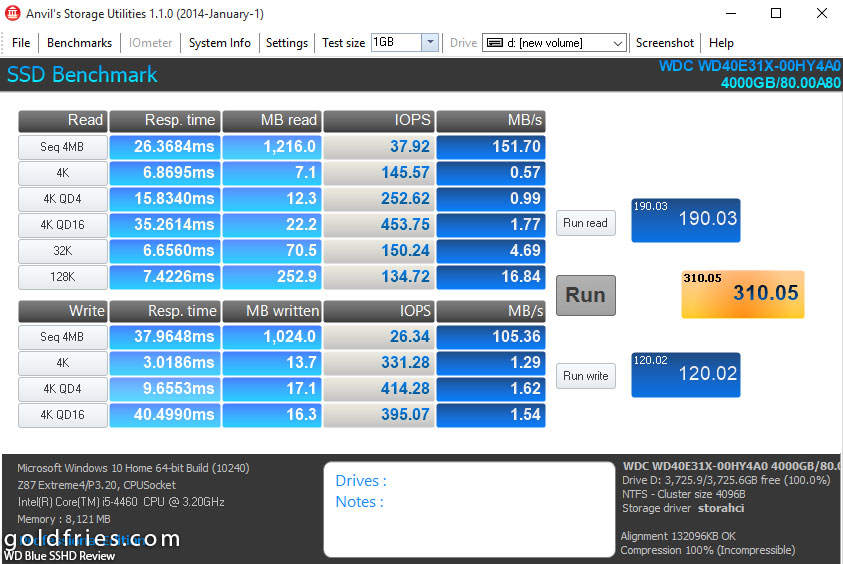 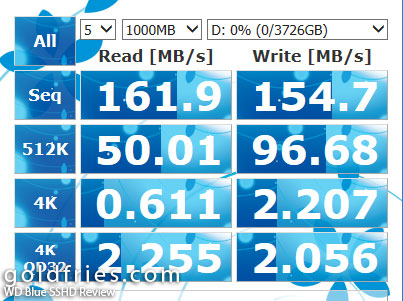 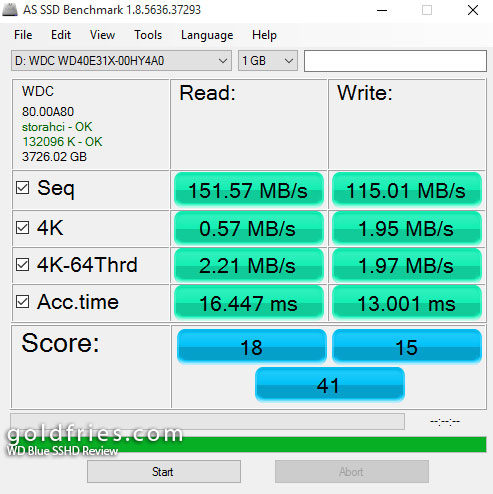 Just to elaborate on the benchmark above, what you see is the typical read and write speed of a HDD. In fact since this drive is based on the WD Blue, a WD Black would still out perform it when it comes to pure read / write on the actual storage platter.

The thing about the WD SSHD is that it’s quite difficult to bench since the NAND Flash advantage is decided by the firmware and the firmware doesn’t cache when the data isn’t repeated accessed. There are some benchmarks that could push the NAND Flash to perform but I’ve decided to go for a different approach and that is to put the drive to use instead of a benchmark suite.

I decided to test the drive with Grand Theft Auto V (GTA V) as the game is huge and the benchmark tool loads a significant amount of data before it is run.

On a HDD like a WD Red, the game loading time is often above 60 seconds, with a few occasions hovering around high 40s of which I suspect due to the operating system’s cache.

On an SSD like the Intel 330 Series, the benchmark loads at around 40 seconds every single time.

Put it simple – the WD SSHD is able to provide SSD-Like performance but the performance gained is subjected to the software you use and how often you use it, in this case I did the benchmark repeatedly so the firmware took note and made the loading time faster, thanks to the 8GB NAND Flash cache.

*More details towards the end of the article*

If you performance that isn’t placed under the mercy of the “Self-learning Technology” then you have only 2 options –
a) WD Black that’s a very fast HDD with plenty of storage space.
b) get an SSD, even the most basic model outruns the WD SSHD by far.

Your frequently used software will certainly load faster once the system learns your usage pattern but how much gained is subjective, especially if the software is small.

From what I observed the WD SSHD would work great for gaming machines and I believe it’ll work quite well too if you are a graphic designer and work on the same large sized file(s) of the course of projects but I can’t say the same for content producers such as photographers or videographers because the content isn’t something you access that frequently.

So – is this drive for you? Good news, goldfries will be giving away a unit of WD Blue SSHD 4TB 3.5″ and WD Blue SSHD 1TB 2.5″ every week for the coming weeks. 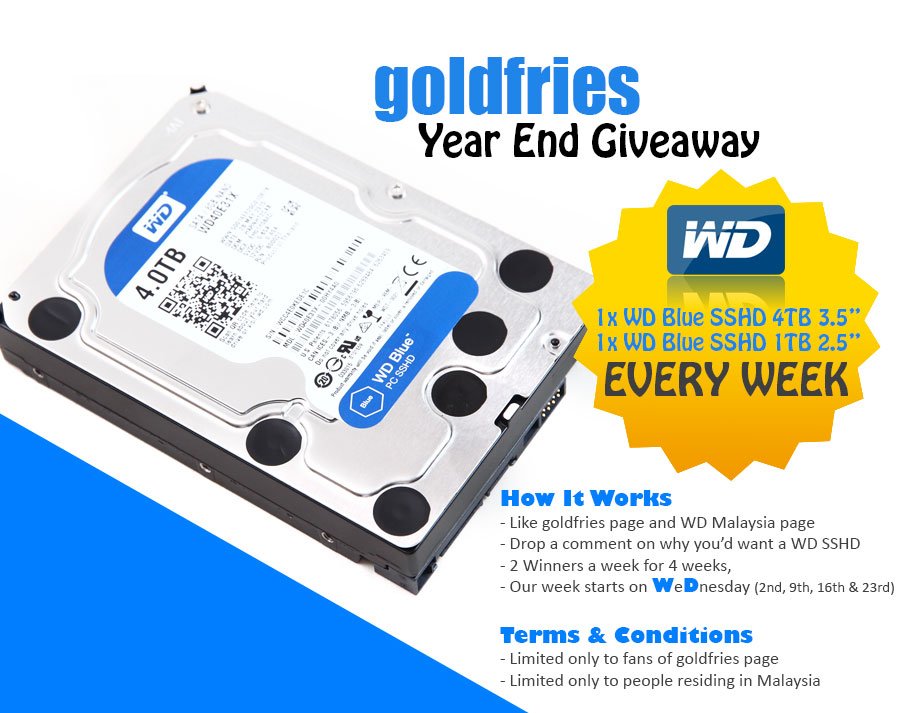 Head over to goldfries’ page to participate.