Gigabyte has been steadily progressing when it comes to churning out amazing notebook and the P34W V3 is one of them, only to be recently updated with the new P34W V4. Well, that’s not to say the P34W V3 is outdated because it is almost as powerful as the V4. 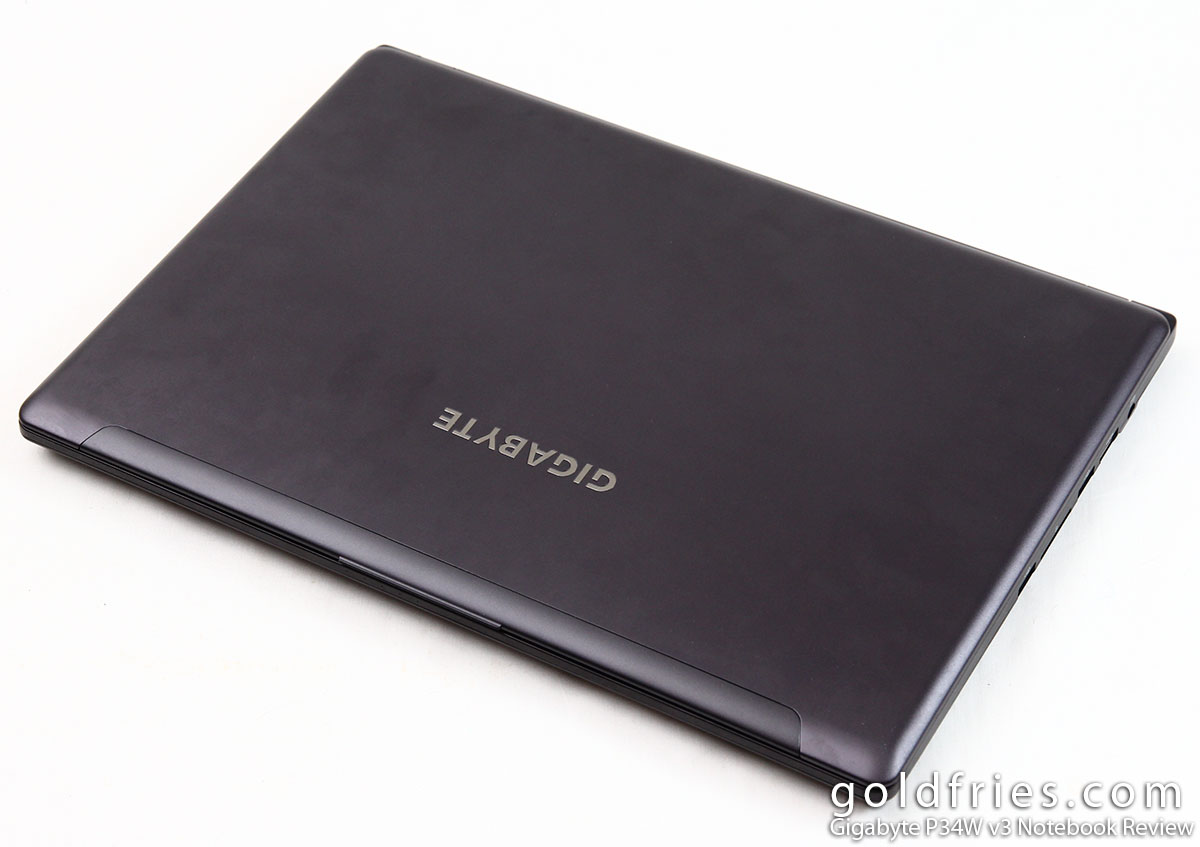 The notebook itself is nothing out of the ordinary, no fancy surface nor design cue. 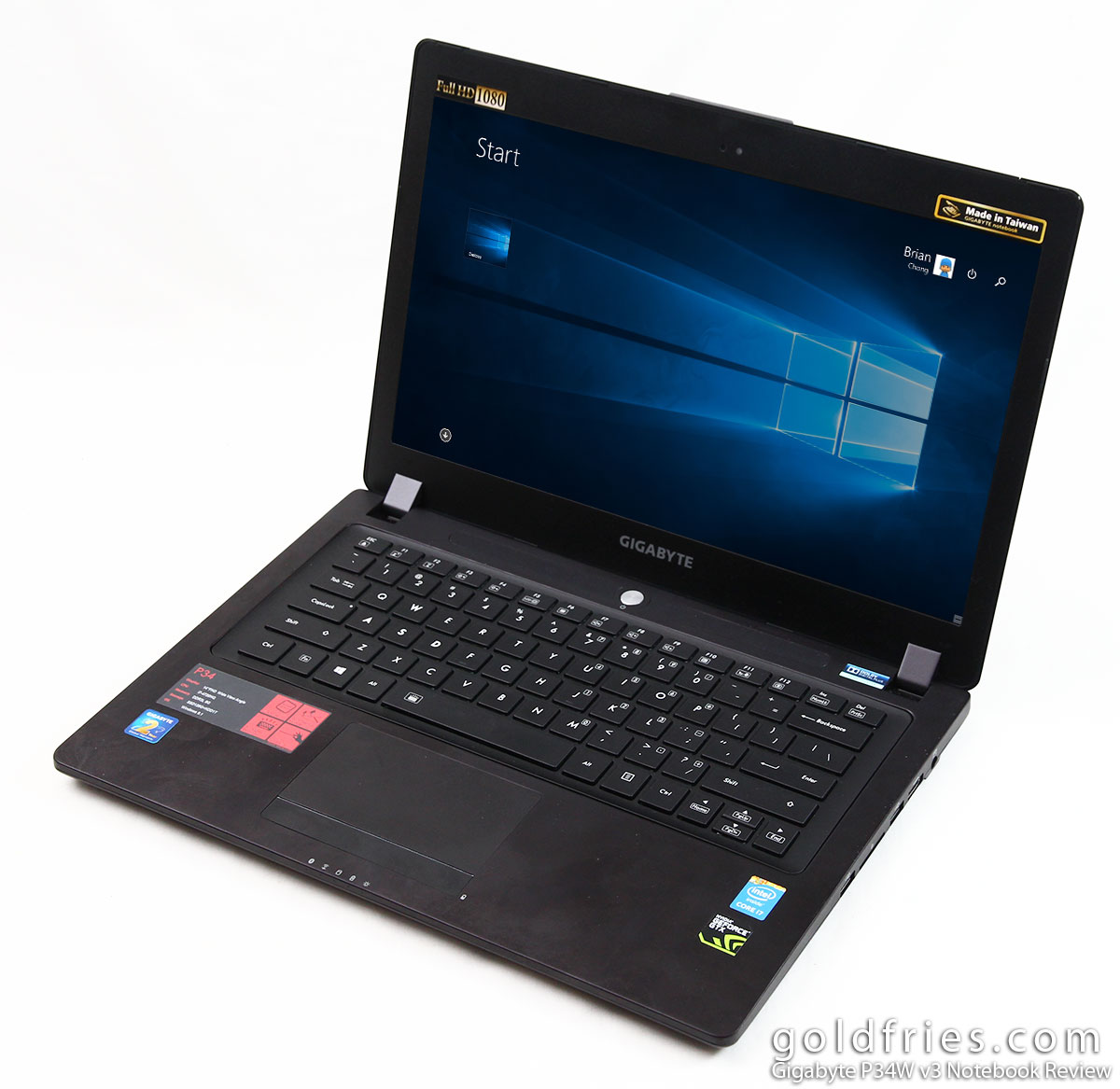 Things start to look more interesting once the cover is flipped – a nice looking Full HD screen with full sized keyboard and a large touch pad. 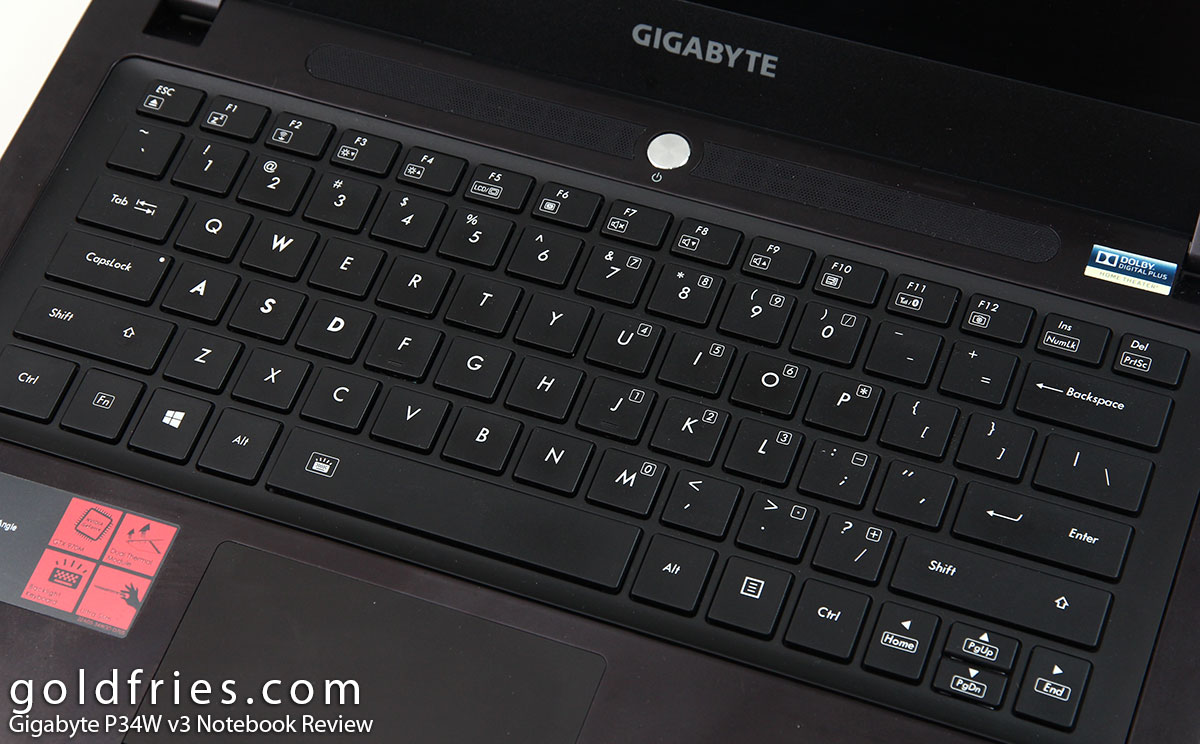 The keyboard comes with white backlight and has 3 settings – Max, mid and OFF. 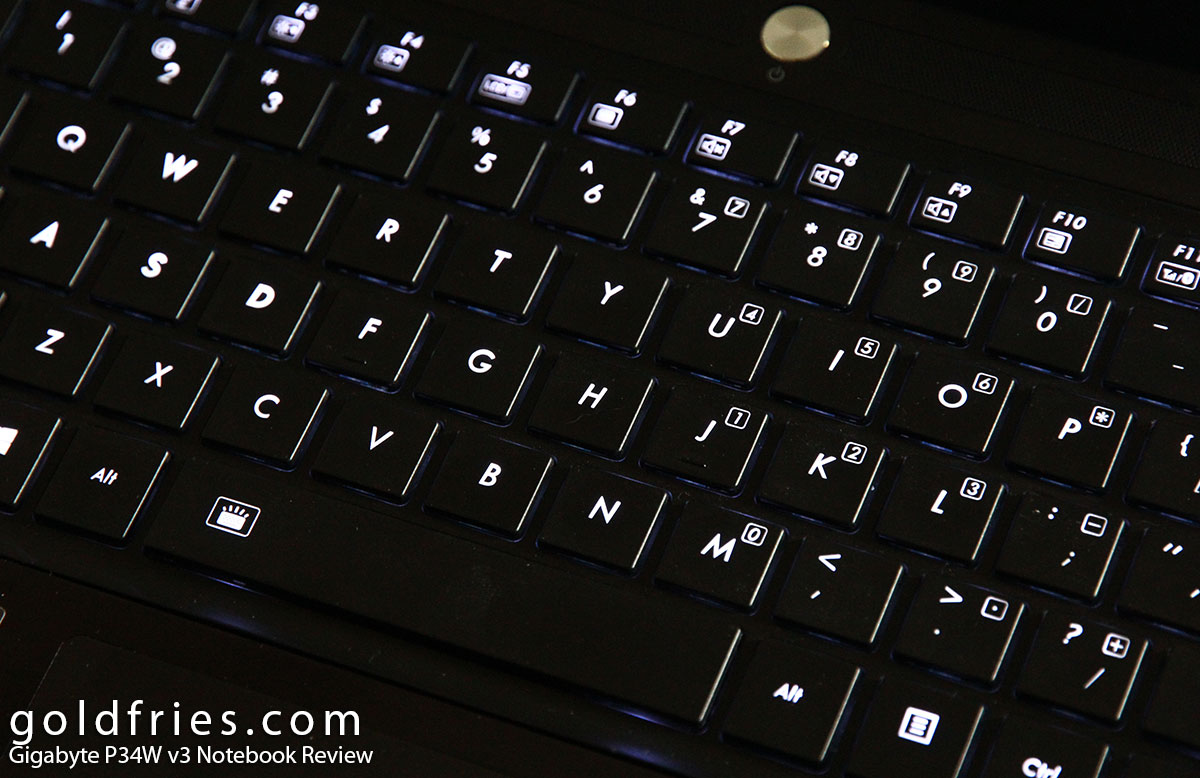 The touchpad is huge and you shouldn’t encounter any problem using it. What’s neat about the P34W V3 is that it comes with a LAN port and even VGA output, that’s mighty useful when it comes to having to conduct presentation with an old projector that accepts only VGA connection. As for the USB port with the CHARGE label – well, I charge my devices with all the USB 3.0 ports on this baby. 😛 On the right side we see even more ports, 2x USB 3.0 ports aside the P34W comes with HDMI output and also an SD Card slot. 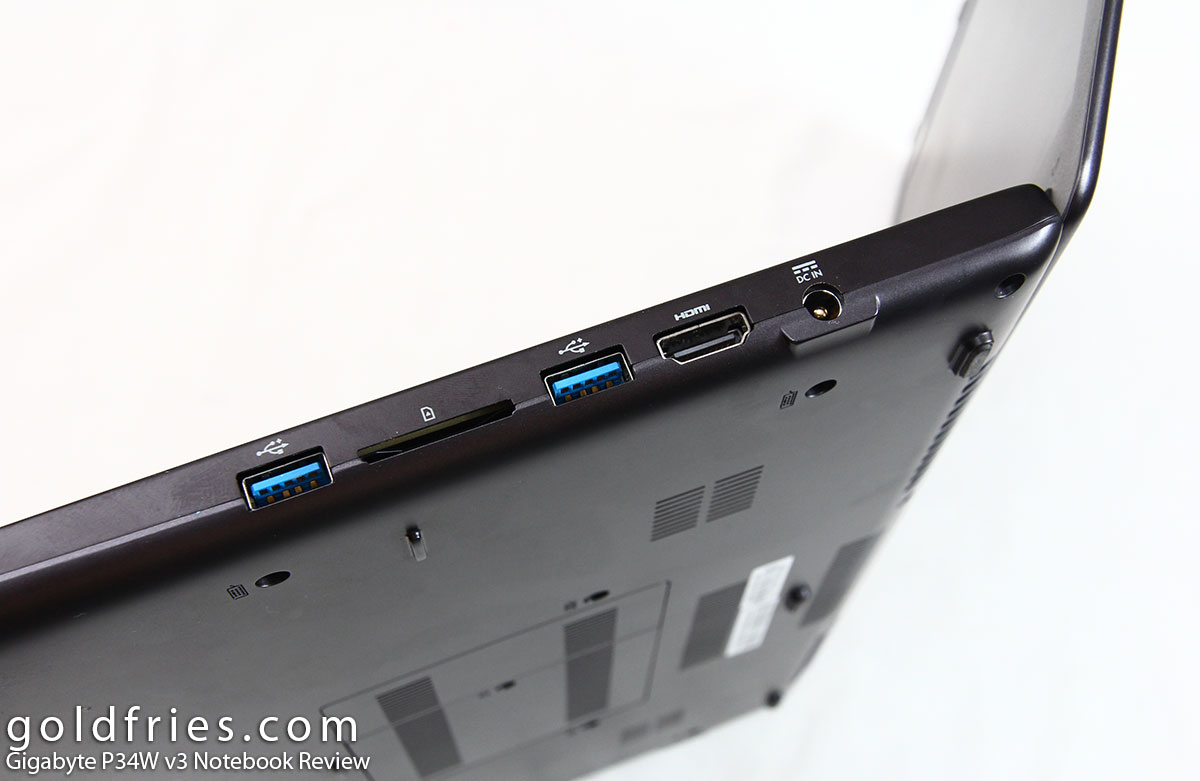 Here’s the read of the notebook, it has 2 vents for exhaust purpose.

And here’s the bottom view of the notebook. 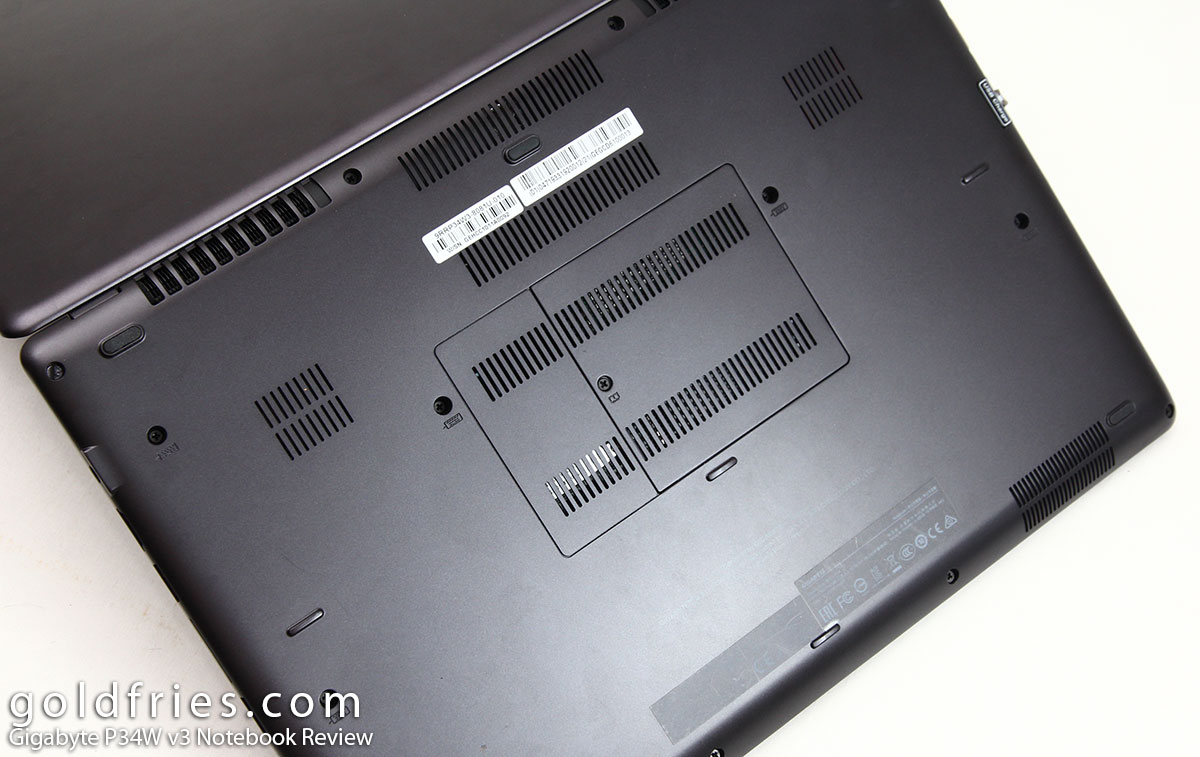 Below are the CPU-Z and GPU-Z captures 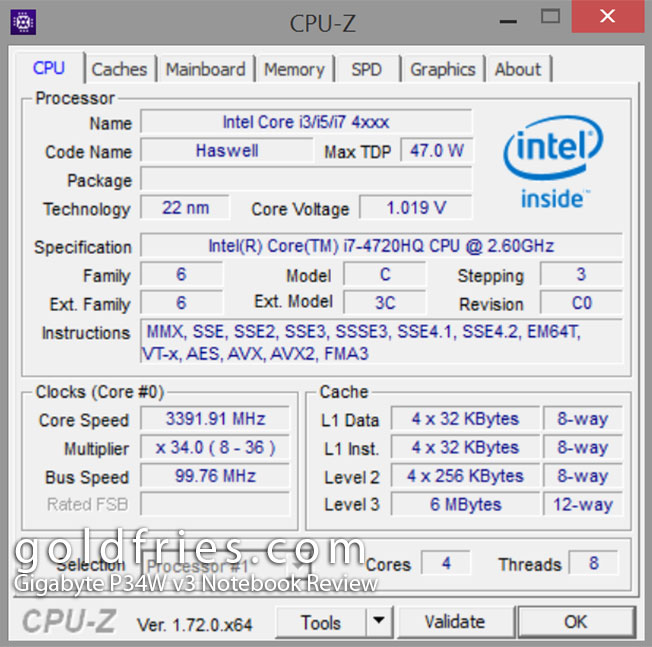 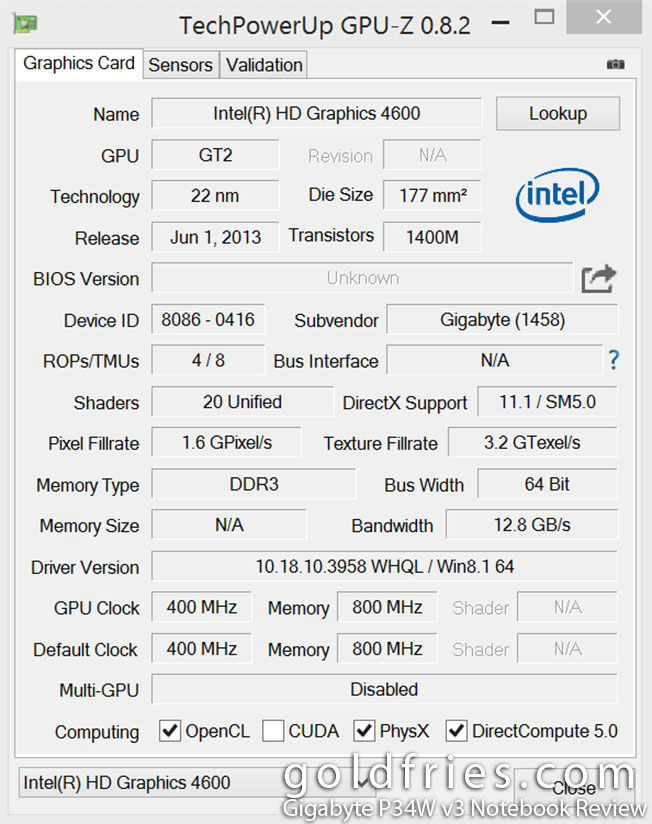 The P34W V3 is much smaller than the P35 model that I reviewed earlier but it comes with performance that’s almost just as good.

I like the smaller nature of the P34W V3 over the 15″ models, they’re lighter and smaller to carry around and with the P34W I was able to get a lot of work done, especially with it’s computing capacity. The P34W V3 however does not come with IPS panel of which I think is a pity, it would’ve made it a proposition of even greater value.

Here’s a summary of the P34W V3’s performance.

Equipped with the Nvidia’s GTX 970M the P34W works almost as fast as the desktop GTX 960, and even surpassing it on games that uses more VRAM.

Next we’ll have a look at the CPU performance.

The Core i7 processor on the P34W V3 is splendid, working just as fast as desktop Core i5 models while not too far behind the desktop Core i7 models.

The Gigabyte P34W V3 registers about 155 watt from wall draw readings, not surprising considering the power it packs, however with power comes a price to pay.

Besides the monetary price, the Gigabyte P34W V3 is a loud notebook due to the heat generated by the components. When on full load the CPU registers a temperature of 95Â°C while the GPU hovers at around 87Â°C. With that amount of heat it’s no surprise why the P34W V3 screams like a banshee.

As for battery life it could last up to 6 hours for general usage, not surprisingly if you’re gaming away then the usage time is reduced to some 2 hours or so which is totally normal for a notebook of such specs.

The Gigabyte P34W V3 is an amazing notebook, it’s available on retail starting from RM 6.2k as seen on IPmart but price varies depending on the configuration.

What I like most about it is the form factor and the performance, not forgetting you can configure it to have dual storage types.