By: goldfries
In: Hardware Reviews, Mouse & Keyboard, Others / Accessories

Game Sir? Yes of course, and I’ll do that with the GameSir T1s Gamepad. While I game primarily on PC and mobile phone, I’m actually also a console gamer so this one comes as something I’d like to try out and I can tell you that I’m amazed by it. 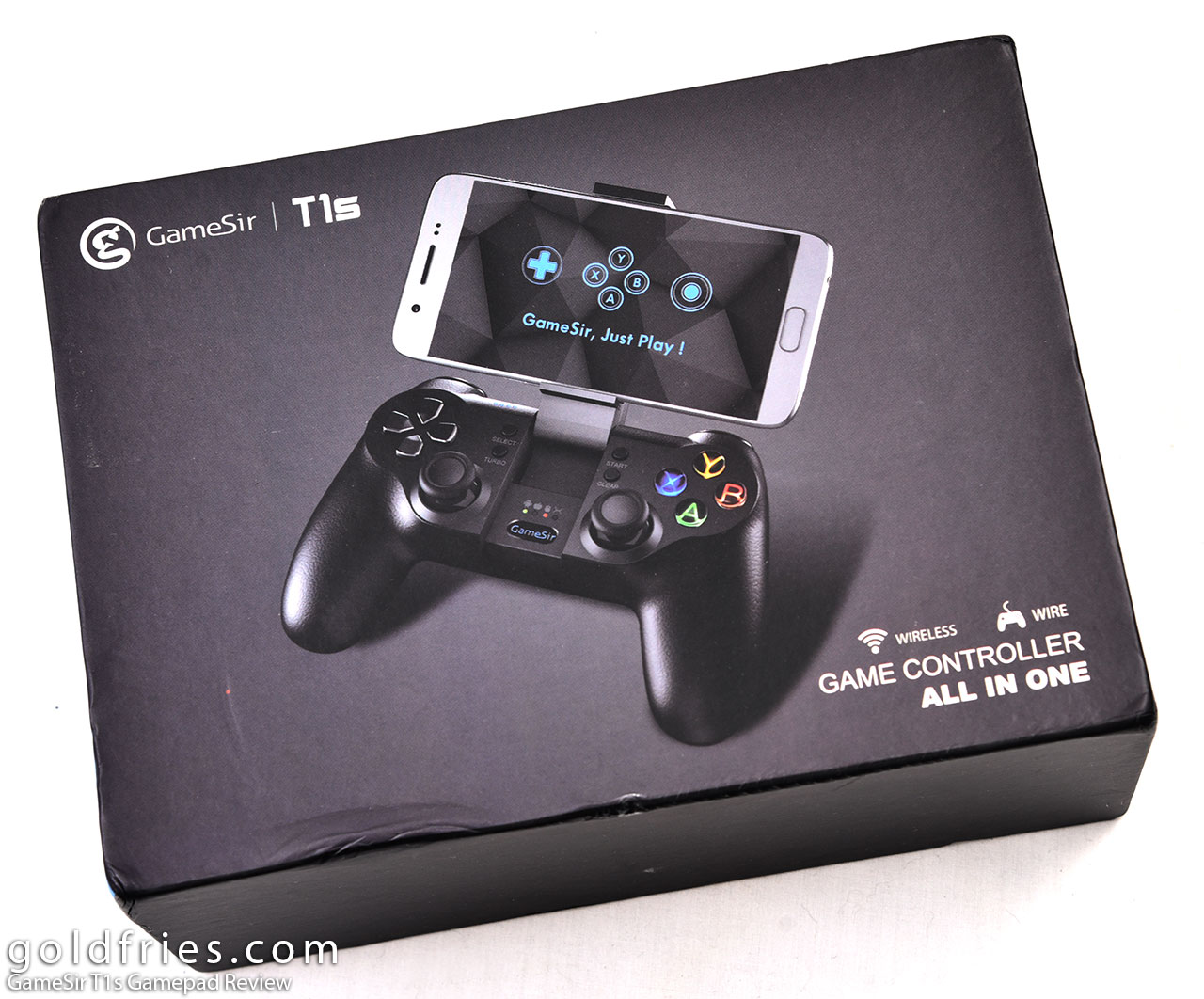 As you can see the design is pretty much like the Dual-Shock Controller from PS4. 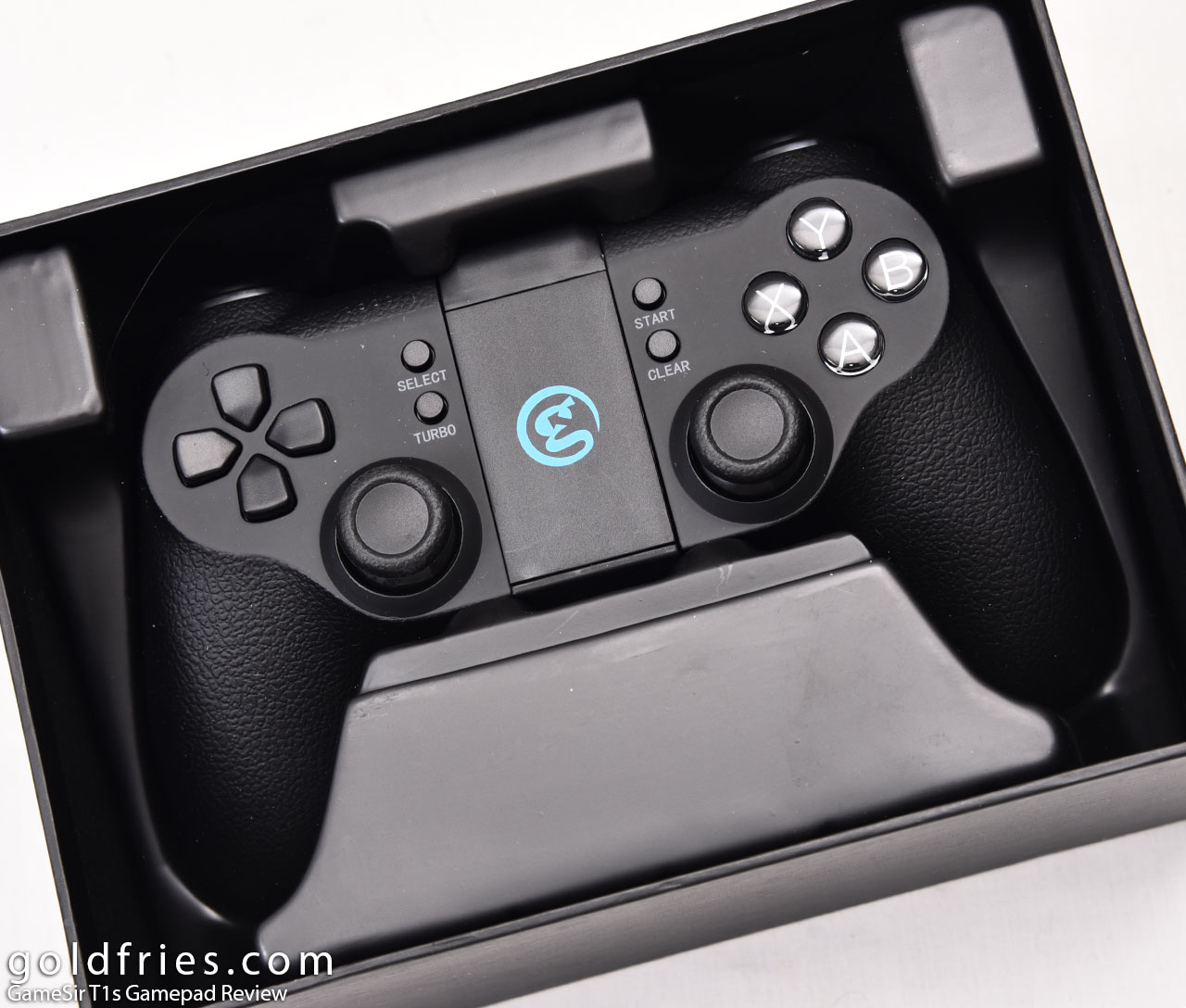 The GameSir T1s supports 6″ mobile devices, my Mi Max 2 however is just slightly too big at 6.44″ so the holder piece missed it by just a teeny bit. The GameSir T1s comes with a Wireless dongle attached at the bottom and it also supports USB connectivity. Here’s the view from the other side – that’s where you have 4 buttons and the Micro USB port. 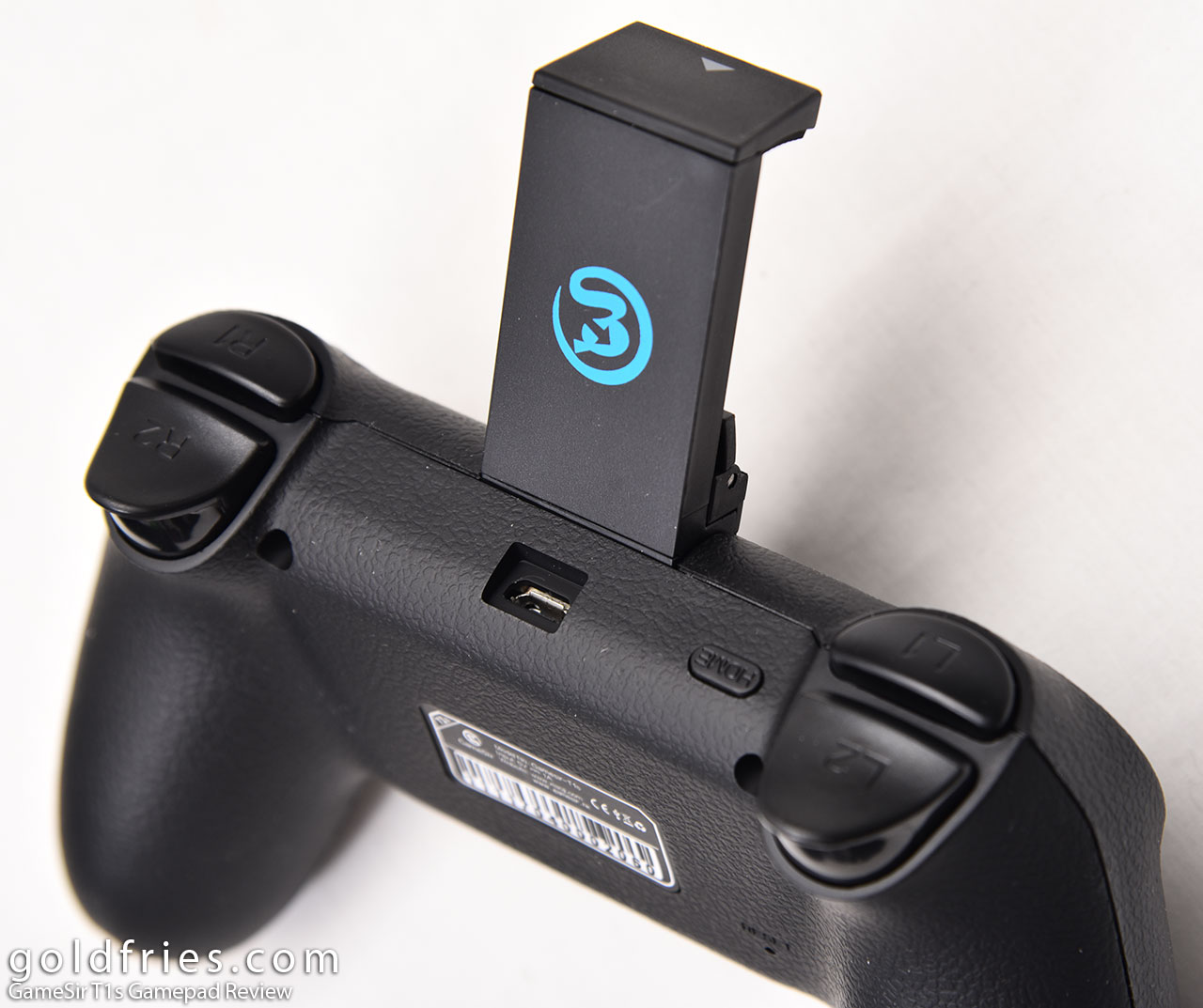 The GameSir T1s lights up nicely on its clear plastic buttons – X Y A B are visible, no complaints on that. 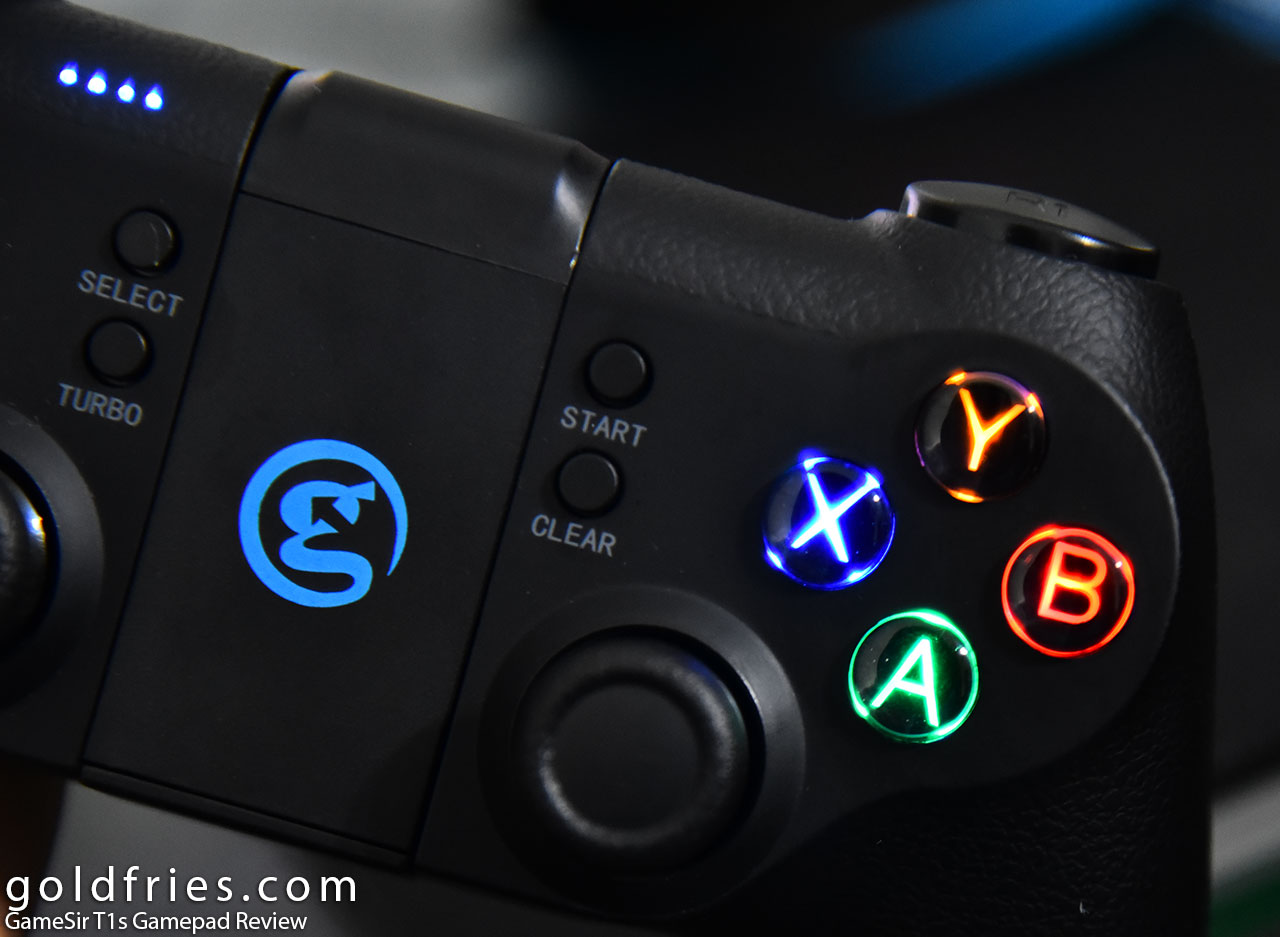 Setting up the GameSir T1s is easy, just get your Bluetooth device running and pair up with the signal and you’re done. Pairing requires you to start it up properly, for example if you were to pair with an Android device then it’s A + HOME button.

Speaking of pairing, the GameSir T1s works with Android, iOS, PlayStation 3 and Windows platform – Mac OS? Nope, no mention of it. My iOS device is just an iPod Touch, it’s an old generation device and I don’t game on it due to lack of space fo my tests are on Android and Windows.

On Android, the GameSir T1s works well – it can even navigate on the interface of my Mi A1. Game support varies, I tested it on Asphalt 8 and it worked perfectly though navigation on screen is still tap-screen input. As you can see from the image below, Asphalt 8 detects gamepad connectivity and shows an instruction screen. 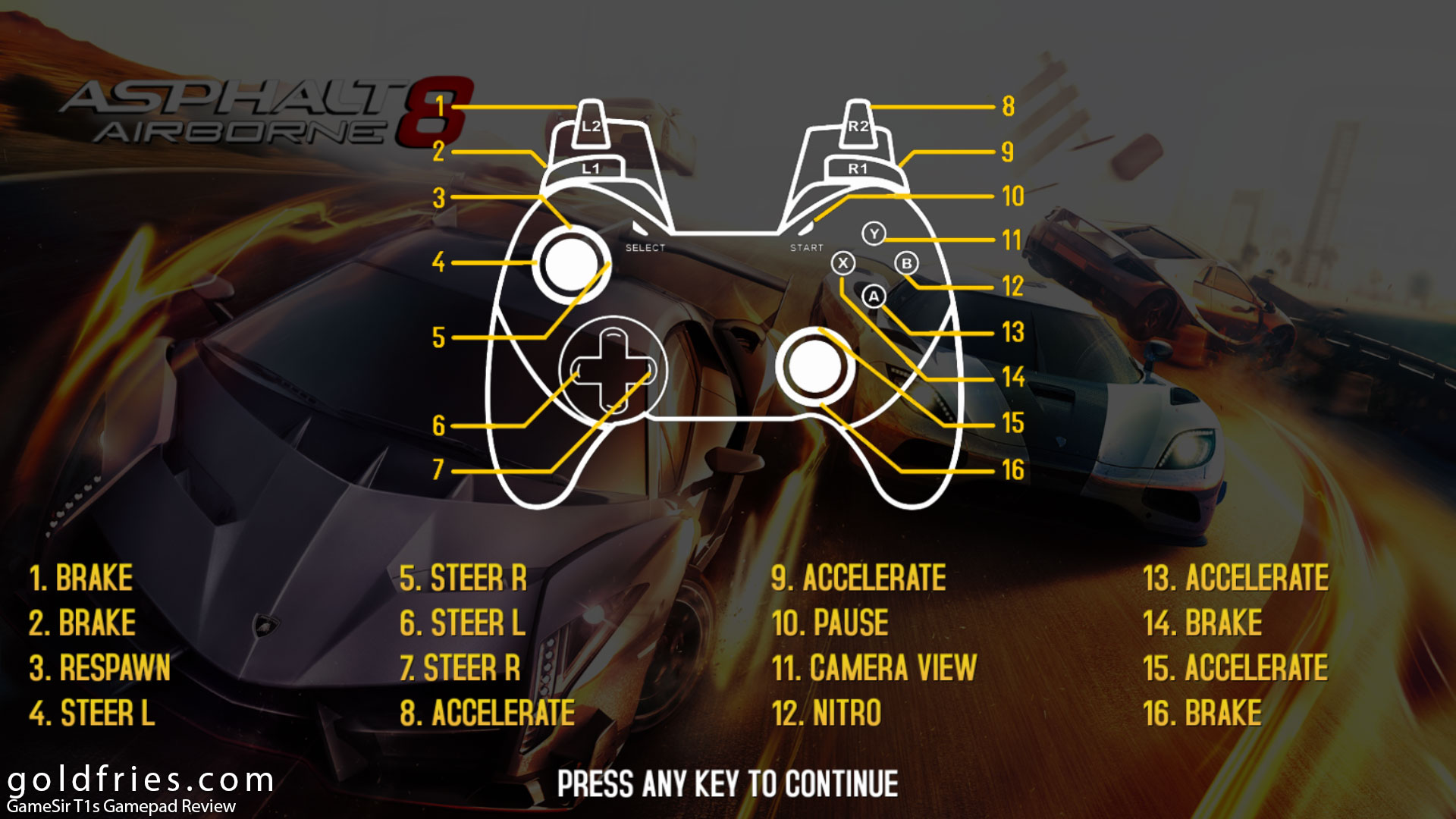 The controller in game is quite sensitive, so when I oversteer on a drift, trying to reduce the oversteer ends up totally counter-steering it. In the end I just went on with holding the GameSir T1s as if I’m on a tiny steering wheel and it worked so well that I finally got 1st place on the track that I can’t seem to get 1st place all the while.

On Windows platform I tested it with Steam and running it in Big Picture mode, the GameSir T1s worked fine as well. You’ll have to resort to keyboard and mouse should there be any pop-ups and what not that may happen but assuming that when all is well the GameSir T1s will work as it is.

What I’m so pleased about with this product is that it’s solid to hold, buttons are comfortable to press and the setup was easy as all I need to do is connect the dongle to my HTPC and Windows 10 just recognizes it and once the connection is establised the GameSir T1s is good to go!

I tested it on games like King of Fighters (arcade fighter), Strike Suite Vector (3D space combat) and A Walk In The Dark (Side scrolling platform) and all of them worked with the GameSir T1s flawlessly.

One thing I find difficult to test is battery because the GameSir T1s just goes on and on. I spent more than an hour on it and the 4-bulb battery life indicator doesn’t seem to budge, so I found out from the official product page that the built-in 600mAh battery is rated to last up to 18 hours. 😀 Sweet!

The GameSir T1s also comes with vibration capability but as to whether it vibrates depends on the game, you are able to set the vibration intensity.

One thing I didn’t like about the GameSir T1s is the Micro USB connection area, it’s fitted into one tiny square that so any USB connection with slightly bigger header will not fit.

The GameSir T1s retails at around RM 130 over on Lazada but it’s not handled by local party so the warranty aspect is the only concern should you buy this product. There’s the Logitech F170 that has 3 years warranty and isn’t that far apart on price tag, the F170 however supports Mac OS but does not support mobile device gaming.

Overall I’m very pleased with the GameSir T1s and I’m pretty sure you’ll like too if you dig using gamepad for gaming.